When it comes to the world of nice denim, it might be the most common question that gets asked: how do I get great fades on my jeans?

For many, this is the whole reason they spend a little extra to buy selvedge jeans: the sturdier, old fashioned kind that’s made on shuttle looms. This kind of denim, it’s generally agreed, fades better than mall brands because the slower pace of these looms means there’s less tension on the yarn, it becomes softer with wear, and the fabric tolerates more slub, all of which contribute to (subjectively) cooler fades. Plus, when you fade your own jeans instead of buying them pre distressed, you’ve earned those fades — your jeans tell your individual story and are uniquely you.

So if you want to earn your fades, you buy selvedge denim, and if you’re buying selvedge denim there’s a very good chance you’ve looked at Naked & Famous, perhaps the world’s best known brand in the space.

To learn all about how to get the best fades imaginable (and if they’re really worth it), I stopped by their flagship store in Manhattan to interview their co-manager Zeke Hartwell. Here’s a how-to fade your denim guide to help anyone from first timers overwhelmed by information to seasoned pros who have absorbed a lot of contradictory information.

How Long Do I Wait to Wash My Jeans?

Before talking about how to wash your jeans, perhaps the most important question is when. How many wears should be between washes?

Well, it depends on how comfortable you are wearing very unwashed jeans — and if you’d rather your fades be “high contrast” or more uniform.

“If you want those very high contrast fades, if you want some stuff with really dark darks and really light lights, the less you wash them the more pronounced the lines (will be),” says Zeke. “Particularly with the initial wash. A lot of guys like to hold off as long as they can before the initial wash — myself included — to get those really sharp lines.”

If you don’t really care about the contrast of the fades, wash them as much as you like. If you love those high contrast fades though? Wait a good 50 to 100 wears between washes.

“Personally, I wear mine every day and I go about three months in between washes,” says Zeke. “Any longer than that, and I find they tend to get holes a lot quicker and they start to smell a little bit, particularly in the summer. The number one thing I like to tell people is to not worry about it too much. No matter how many times you wash them, the fades are gonna happen over time. They’re still gonna happen regardless of what you do, no matter how many times you wash or wear them.”

If you only read raw denim forums you’d think the worst thing you can do is wash your jeans, but never washing your jeans can actually harm them.

“Dirt and grime gets built into the fibers and that makes them more brittle and more likely to tear,” says Zeke. “So over time, if you truly never wash them, you’re going to end up with a hole. But one of the great things about raw denim like this is that you’re buying a really high-quality product that you can easily repair and keep wearing for a really long time.”

Ew. Isn’t It Unhygienic to Not Wash Your Jeans?

Why do we wash our clothes? Because they smell, or because we think that not doing so fosters malignant bacteria?

In the denim community, there’s this belief that the bacteria isn’t really that harmful and there’s not much of it anyway, because cotton and indigo have some antibacterial properties. I personally think this is somewhat exaggerated, and I wash my jeans pretty regularly compared to some other guys.

If you don’t really care about the contrast of the fades, wash them as much as you like. If you love those high contrast fades though? Wait a good 50 to 100 wears between washes.

But dissenters often point to research that found similar levels of bacteria in jeans whether they had been washed recently or a few months earlier. That’s the only research we’ve found on the topic, however. (University funding tends to prioritize research like cancer cures over jean washing frequency.) But it remains true that we’ve never heard of jeans-related bacterial infections.

Now, humans do shed some 500 million skin cells per day and if compounding around half that amount every day in your jeans skeeves you out, look, it’s fine to wash your jeans as often as you like. In any event, it seems the driving factor in how often you should wash your jeans is less about bacteria or grime and more about what makes you feel icky.

[Check Out: Should You Wash Your Jeans, Ever? Naked & Famous Denim Explains]

Can I Wash My Jeans More Often? 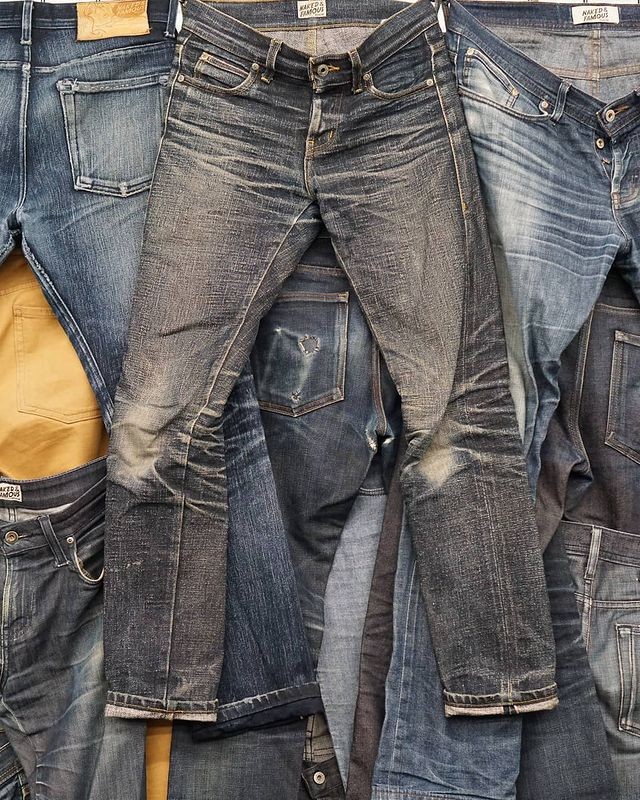 How Often Should I Wear My Jeans?

If you’re going to wear your jeans less frequently and wash them more frequently, consider this: when you’re done wearing them at the end of the day, rather than folding them up or leaving them on a pile on the floor, hang them up and get some air circulating through them. That helps them dry out a little bit and helps them not smell as much while your jeans are going unwashed.

How Do You Wash Raw Denim?

In my quest to learn way too much about denim, I’ve stumbled upon a few old obscure Japanese websites that recommend using special detergent for raw denim, like Samurai Thunder Soap.

“A lot of those detergents, the main thing they’re doing is preserving the color a little more,” says Zeke. “If you want them to stay a little darker, you can just use a dark detergent like Woolite Dark. There are a lot of denim specific ones as well, but personally, I just use Tide.”

Now for the most controversial part of our interview: adding bleach.

“I actually want them to get a little bit lighter as I wash them, which is why I use just a normal detergent instead of Woolite Dark. And I put a bit of Oxyclean or even a capful of bleach in there, because I find that makes the blue really bright.”

“Just a little bit! The washer’s gonna dilute that so you’re not going to end up with any weird patterns, but a touch of bleach will brighten the color a bit.”

This was so controversial that Naked & Famous released another video breaking it down, which I’ve embedded below.

Should I Soak/Freeze My Jeans Instead of Washing?

Some people fear the washing machine. Jeans might tangle on the agitator and create a weird pattern, wrecking your hard won fades. (I’ve done this myself: I forgot to turn them inside out and I left them in the washing machine all day before drying them, letting the “marbling” set in.)

Turning them inside out helps prevent this, but some guys would rather avoid the risk all together and soak them instead.

“The washer is gonna wash all that dirt and grime out and do a better job of cleaning them,” says Zeke. “But a lot of people like to soak them. Largely, soaking is going to help change the color a bit. If you want to a hand wash, you do have to have some agitation, some sort of water running through the fabric, because that removes the actual dirt. A soak is going to remove some of it but you should at least rinse them really well or agitate them around in the tub.”

So why soak if the wash will be inferior? Like we said, it removes the risk factor of the agitator messing with the fades, but the more practical reason is that soaking actually keeps the jeans from fading as much as they would in a washing machine. If you really like the way your jeans look and don’t want them to fade any more, soaking will do a better job of preserving the color. Just try to agitate it a bit as well.

Some guys, in an effort to clean without cleaning at all, have convinced themselves that putting their jeans in the freezer is a great way to kill the bacteria while preserving the high contrast fades.

“The freezer is definitely not effective,” says Zeke. “You can put them in the freezer and when you pull them out they might not smell as much, but you haven’t killed any of the bacteria and you haven’t removed any of the dirt. As soon as you go into a warm environment they are going to start smelling again.”

[Check Out: The 5 Weirdest Naked and Famous Jeans of All Time] 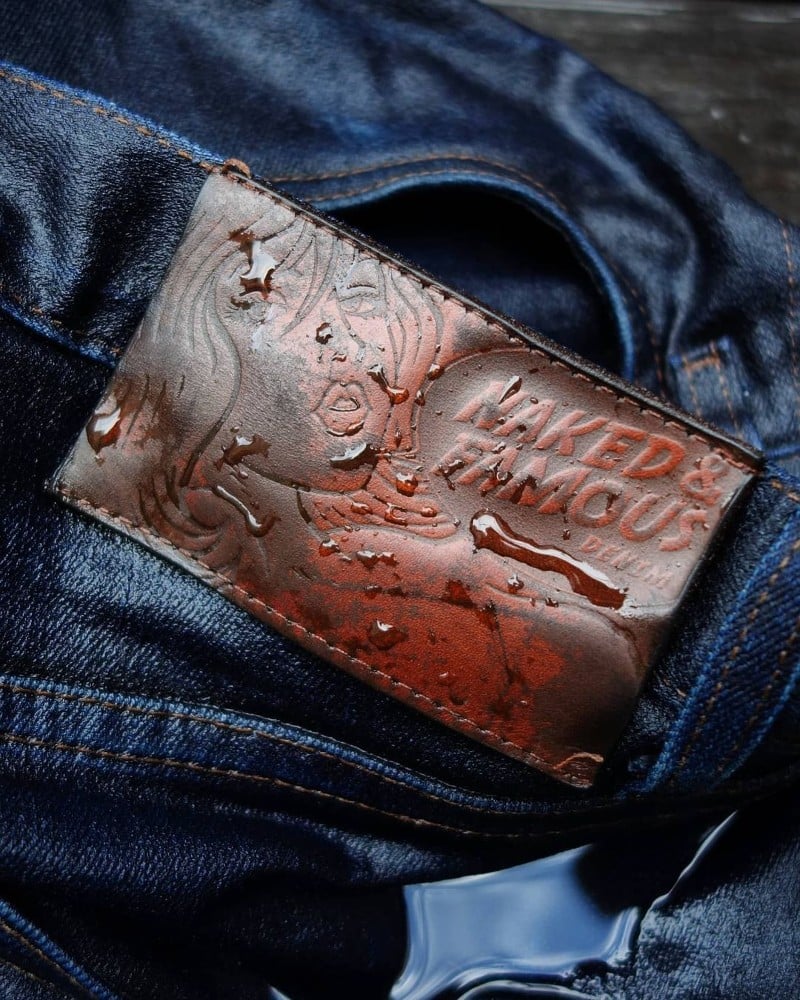 That’s about it for our guide to fades. Infrequent washing makes higher contrast fades, more regular washing leads to more even fades — in any case, fades will happen.

“You’ve just gotta wear them,” says Zeke. “That’s the biggest thing. Wear them as much as you can. Wear them as long as you can. Repair them when they need a repair. And don’t forget to wash them at some point. We don’t like to recommend that you never wash them, because you’re pretty likely to get a hole.”