At a cursory glance, Thursday’s Captain and President boots seem like the same boot, with only toecap — an extra layer of leather over the end of the boot — to differentiate them. But there are actually multiple differences between these two boots you should know about. I’ve worn in multiple pairs of these boots (the Brown and the Terracotta Captains and the Tobacco President) and I’ve really worn them to hell

But you are here because you want to know what’s the same and what’s different between the two models of boots.

The first difference is indeed that toe cap. Every version of the Captain boot has a few lines of stitching over the toe break.

It’s worth emphasizing that it isn’t, as I incorrectly noted in the video above, another strip of leather. In boots like the Red Wing Iron Ranger, another layer of leather is added on top of the end of the boot to offer a little more protection, however the Captain’s toecap is two pieces of leather stitched together, as opposed to on top of one another.  I wouldn’t really emphasize the protectiveness, but this does add a bit more structure to the toe. Toe caps can also sometimes make small feet look smaller, so if that’s a concern then you might want to consider the plain toe President. 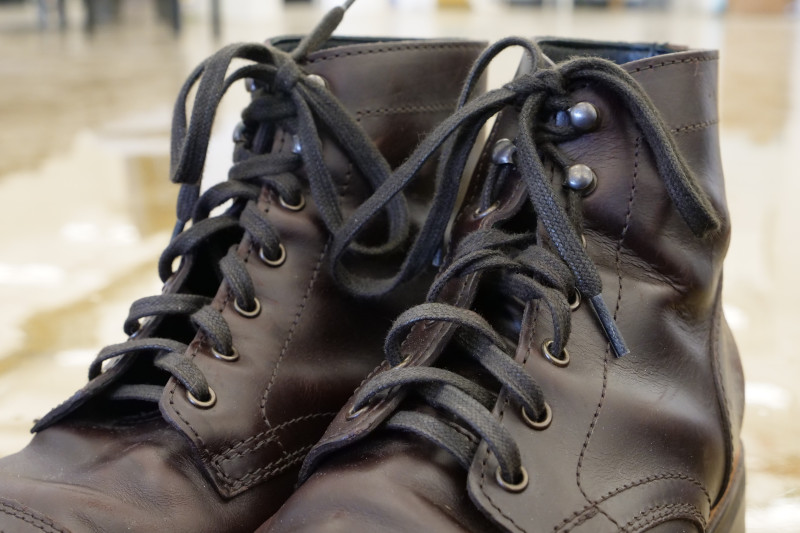 The second difference is the speed hooks: all the Captains have them, while only some of the Presidents do.

Speed hooks — where there are hooks instead of eyelets — let you speedily lace up the boots, and for many guys they’re actually a priority.

So if your boots don’t have speed hooks then they’ll look a little cleaner but they’ll take more time to get on and off. If it’s a big deal to you, a cobbler can replace the eyelets with speed hooks (or vice versa) for a few bucks. 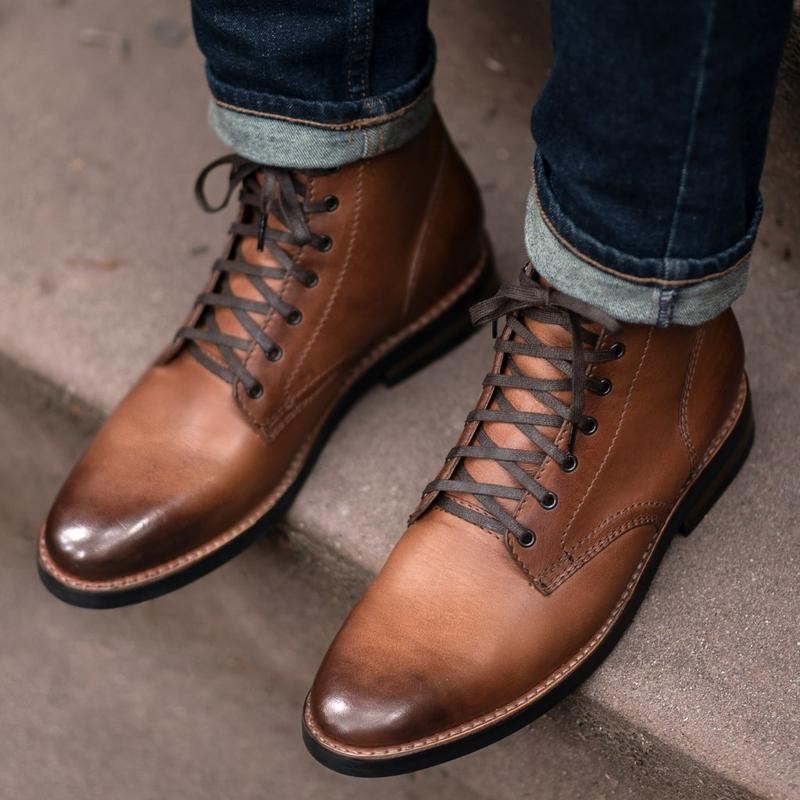 The third difference is the widths. At the moment, there are just two President boots that are available in wider widths: the Tobacco and the Brown (with speed hooks). Again, this will probably change, but out of about a dozen versions of the President, only the Tobacco comes in widths that are meant to fit EE and EEE feet. (Thursday’s “standard” width is meant to fit D and E widths, “wide” is for EE and EEE.)

Meanwhile, the Captain has six models you can get in wider widths right now: Brown, Terracotta, Black, Natural, Black Matte, and Arizona Adobe. So the Captain is a much better bet for dudes with wide feet.

I’m sure that in time Thursday will have the same soles available for both boots, but right now Thursday’s new-ish sole, the Storm King, is available on the Captain boot and not on the President boot. The Storm King is an extra grippy, functional, and tall sole that you can grab on the Tobacco Captain and the Whiskey Captain. 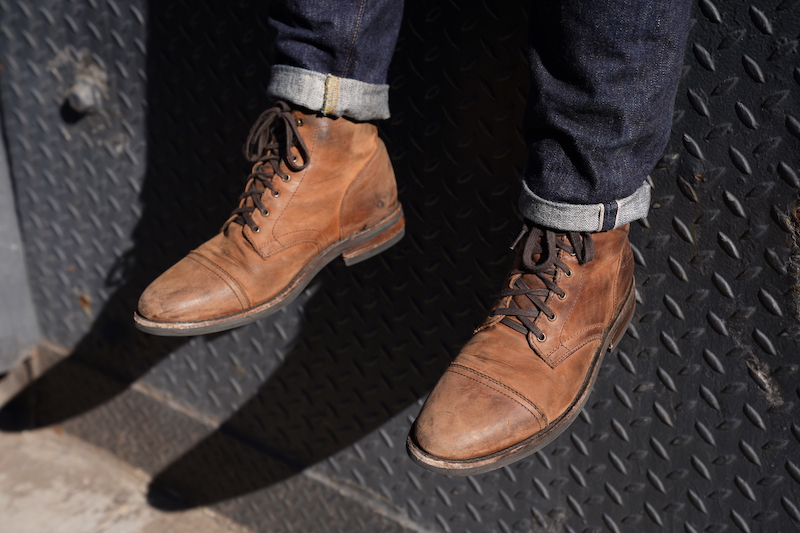 Finally, the fifth and last difference between the Captain and the President is the leathers. Some Captains are available in certain leathers and colors that you can’t get on the Presidents, and vice versa. For example, both come in the brown Thursday Chrome and natural Chromexcel, which are sort of Thursday’s classic leathers that they’ve had from they launched. Otherwise there are not a lot of leathers you can get on both of these boots.

But there are lots of leathers you can only get with specific models of boots. The Saddlewood Rugged and Resilient leather is not available on the President boot but the Frontier, Mahogany, and Black Coffee leathers can only be bought on the President. 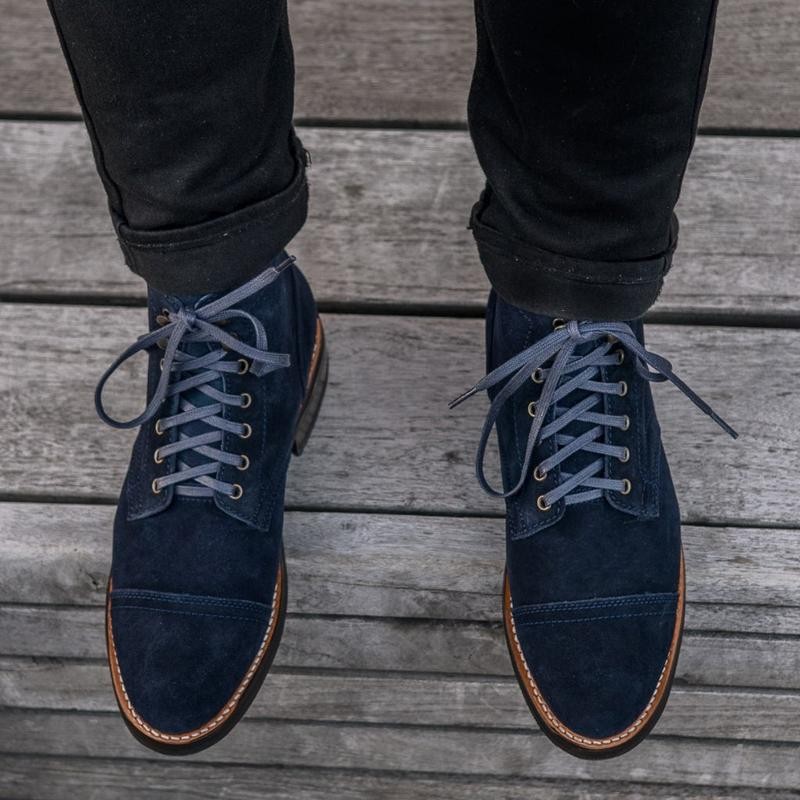 The Captain is the more popular boot and therefore is available in more leathers and more experimental offerings too, like the vaguely orange Burnt Ginger or the Midnight Blue Suede (above). Typically, those kinds of colors will wind up as options for the Captain. That’s a bit of a generalization, but you’ll find more experimentation going on with the Captain than on the President boot, generally speaking.

And that’s all the differences between these two very very popular boots. The main takeaway here is the Captain is more popular, so there are more configurations you can buy — the storm king sole, unusual leathers, and more widths. The Captain has always been Thursday’s flagship boot, so that’s where you’ll see the brand trying out different styles and unusual leathers. The President is a tad more traditional as far as aesthetics go, but I absolutely love wearing them both.