Naked and Famous is a legendary denim brand that’s well-known for pushing the boundaries when creating new fabrics. Ever since they were founded in 2008, they’ve consistently launched products made with the kinds of textiles one never imagined possible: glow-in-the-dark jeans, scratch-and-sniff jeans, jeans made out of milk, and many, many more.

On a recent trip to Montreal, I was fortunate enough to visit the company’s headquarters and speak with the founder and CEO, Brandon Svarc, about all manner of topics, including the tale of the thickest jeans ever made and whether or not you should wash your jeans.

But the main event — well, the most list-friendly — is this list of the weirdest jeans the company has ever produced, hand picked by the CEO himself.

The King of Lords

This first entry is actually a combination of two other extreme denim experiments — The King of Slub and The Lord of Nep.

“The King of Slub was the slubbiest denim ever made,” says Svarc. “A slub yarn is when you use this wavy yarn, you take multiple wavy fibers, you spin them together and you get a bumpy yarn out of it.”

In other words, the thickness of the fabric varies, making for a streaky look that many denimheads covet — so Naked & Famous dialed the slub up to eleven for this iconic pair of jeans.

Then there’s nep, another adored characteristic of some selvedge denim that the company maximized in their Lord of Nep jeans. It’s when fibers protrude from the surface of the jean, looking a little like knots or piling, and when you deliberately make the world’s neppiest jeans they look like they’re covered in snow.

“This was this super neppy denim, it was a 14 oz denim, we put an ostrich skin patch on it too,” says Svarc. “It’s funny, most companies will try and avoid the nep as much as possible. They’re considered imperfections. So we said, we want to blast it with as many imperfections as you can get to make the neppiest yarn ever.””

So the next step was, of course, to combine the two.

“We took the warp yarn from the King of Slub and added the weft yarn from the Lord of Nep to make a 23-ounce super slubby, super neppy, crazy denim.”

This is the King of Lords. 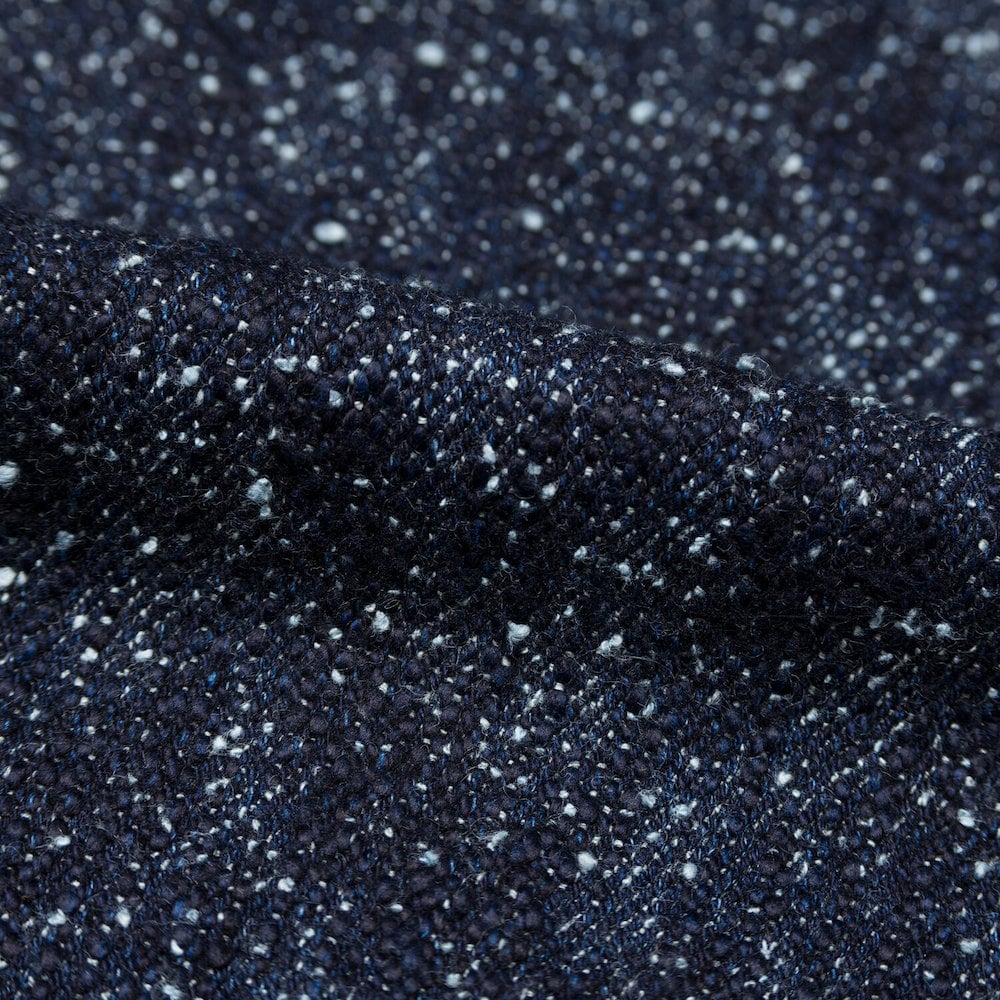 Likely both the neppiest and slubbiest denim ever made, woven together on vintage looms that add more character to the denim.

[Shop the King of Lords Denim]

Talk about weird, but buyer beware: they are so sensitive to temperature changes even a low-key fart will leave a toot-shaped patch on your bum. Farts are hotter than the air; it’s science.

The technology is called thermo-chromatic dye, which is stored in tiny capsules embedded into the fabric that change color when exposed to body heat. The ‘magic’ wears out after being washed repeatedly, or if you expose your clothes to really hot water or air. The jeans used in the video with Svarc had been sitting near a heater for an extended period of time so they weren’t perfect, but most of the jean still changed color with a hot breath onto its surface.

“This is obviously very weird and not for everybody, but they’re so much fun,” says Svarc. “It doesn’t have to be your everyday jean, but it’s a great party trick.” 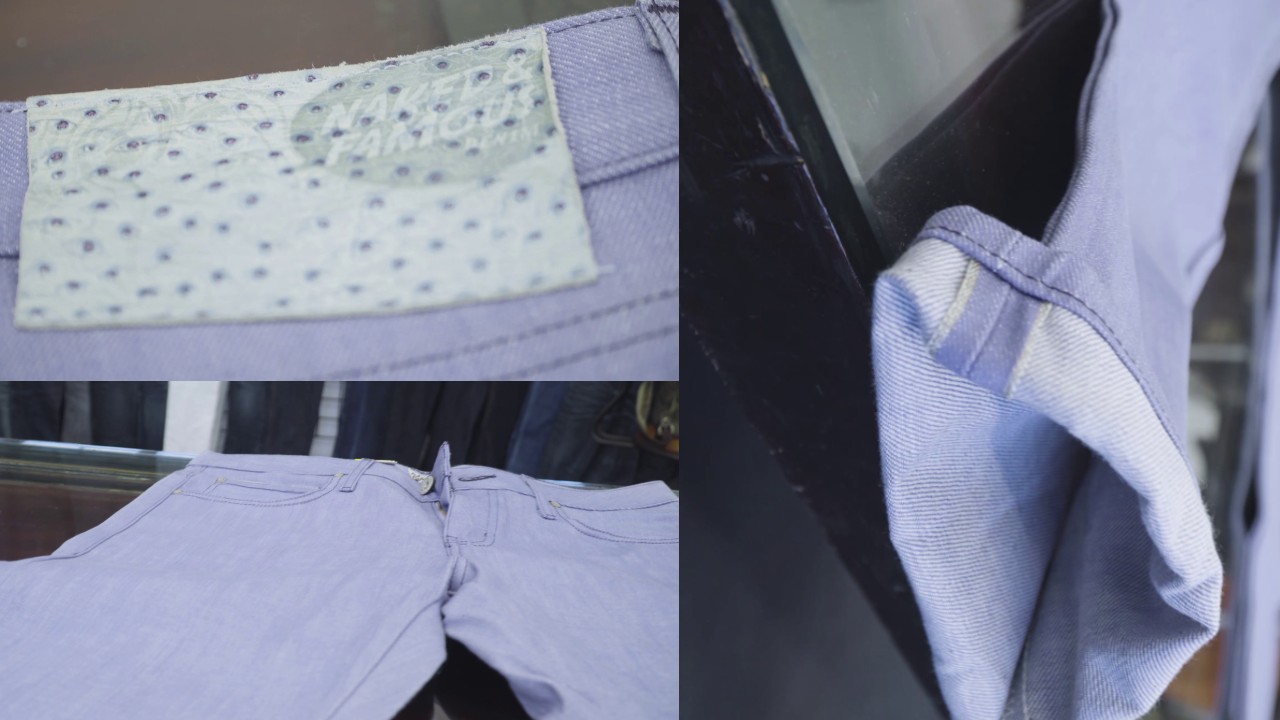 “More than ten years ago we were selling at Barney’s, we were doing really well, and they wanted more weird and inventive and crazy things,” says Svarc. “So I was in Japan and I was asking the mills if they have a few hundred meters left over from years ago. ‘Take me to the back room of some of the mills,’ and that’s how I found this lavender with the silver selvedge.”

Despite the objections of his father — “That’s crazy, no one wants to buy that!” — they sold out in a week.

“A very happy ending to a pretty weird denim.” 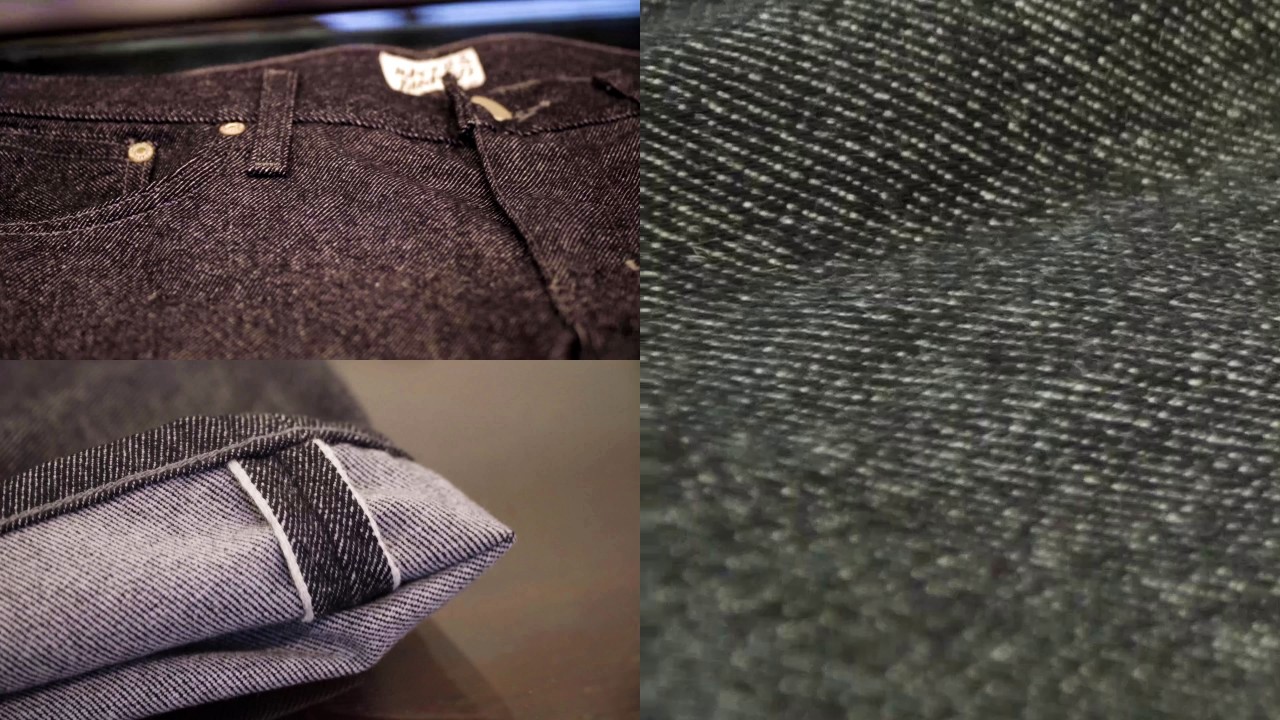 This is not their Black Cashmere and Cashmere Stretch Blend denim which were released a few years ago and are still available to purchase. Those jeans are cashmere blends, just ten percent of them are comprised of this pricy, ultra soft goat’s wool. But once upon a time, Naked & Famous decided to whip up a jean that was one hundred percent cashmere

Instead of cotton, both the warp and weft are 100% cashmere, specifically 3×1 black warp and white weft with a pink selvedge edge to it.

“They’re not big tough guy jeans. They’re not our 32-ounce jeans you’ll wear on a motorcycle,” says Svarc. “But they’re so flowy and luxurious and soft. And who’s ever heard of 100 percent cashmere denim? Someone asked me why would I do this? The answer is that nobody else would do this.”

Cashmere is wool from goats, which have the outside hair called the guard hair and inside hair called the belly hair — that’s what was used for these jeans. The staple of the fibers are longer than cotton, and even that depends on which goats you use.

Naked & Famous only sold about eight pairs and they cost $1,400.

“A hundred percent cashmere is not cheap.”

Want a pair of pants you can wear snowboarding and then take to the bar? Meet the Snow Pant Denim.

“This is a denim that has bonding to it, so it’s fully waterproof. It lets you perspire and lets the water exit, but doesn’t let it penetrate inside,” says Svarc. “We actually had people sending us pictures of them like snowboarding in jeans and stuff.”

Waterproof, windproof, and they even have a zippered panel so you can fit them over your boots.

We limited him to five pairs for this list, but Svarc listed off a few of the other standouts that didn’t make the cut:

Most of these are no longer available for purchase, but there’s still plenty of very strange denim on sale at any given time. Check out their store on Tate and Yoko where Svarc will continue, as he says, “to make fun shit.”