To say that vintage watches have been in vogue for the past few years would be an understatement to say the least. Indeed, the watch world has been ablaze with interest and desire for vintage watches and vintage styling for the better part of the past decade, those flames fanned further by the record setting sale of Paul Newman’s Rolex Daytona in 2017, which sold for just over 17 million dollars.

With numbers like that, it’s no wonder why companies are scrambling into their archives to drum up ideas they can for vintage inspired designs.

But as the fervor grows and more budding watch enthusiasts begin reaching for their credit cards, more and more people are finding that they simply are not able to buy the watches they want. They are utterly unavailable. This scarcity (authentic or otherwise) can have unintended, though at times beneficial, consequences, forcing consumers to stray off the beaten path for less hyped, more available, and at times better value watches. 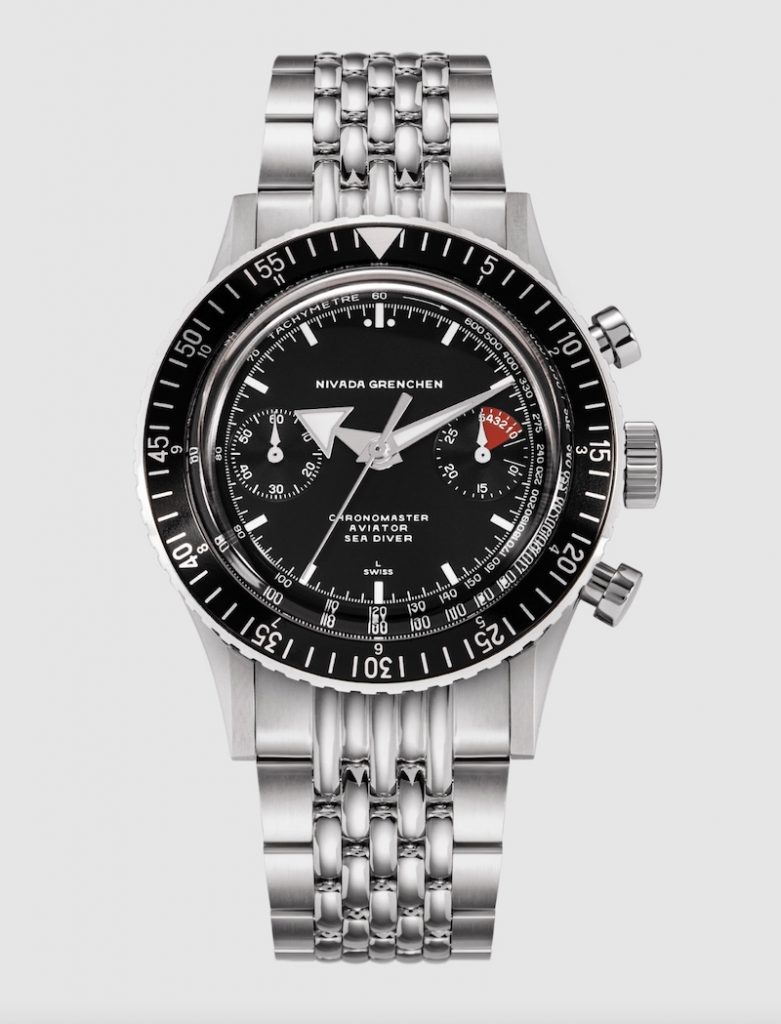 Got somewhere to be? Here are the pros and cons of the Chronomaster Aviator Sea Diver. (Ours is the White Broad Arrow Manual):

Nivada Grenchen was started in 1926 in the town of Grenchen, Switzerland. Like many Swiss watch companies, Nivada fell victim to the economic challenges of the Quartz Crisis of the 1970s. But, in recent years with the simultaneous rise in popularity of vintage watches and a growth of a unique space in the market for smaller, independent watch companies, Nivada Grenchen has found new life: drawing on classic, utilitarian designs of their historic catalog.

First introduced in 1963, the Chronograph Aviator Sea Diver (whose name was later updated to the far more vaunted ‘Chronomaster’) was meant to be a go anywhere, do anything adventure watch. This modern revival achieves the same goal, having been reproduced to almost the same exact functional specs (though, undoubtedly updated with improved gasket and case materials.) Thus, the Chronomaster Aviator Sea Diver features a 100m water resistance and a bi-directional rotating dive bezel. The tension of the bezel is sturdy and, though lacking in a ratchet system, is unlikely to be knocked about or movement by any accidental brush of the arm or a wetsuit. 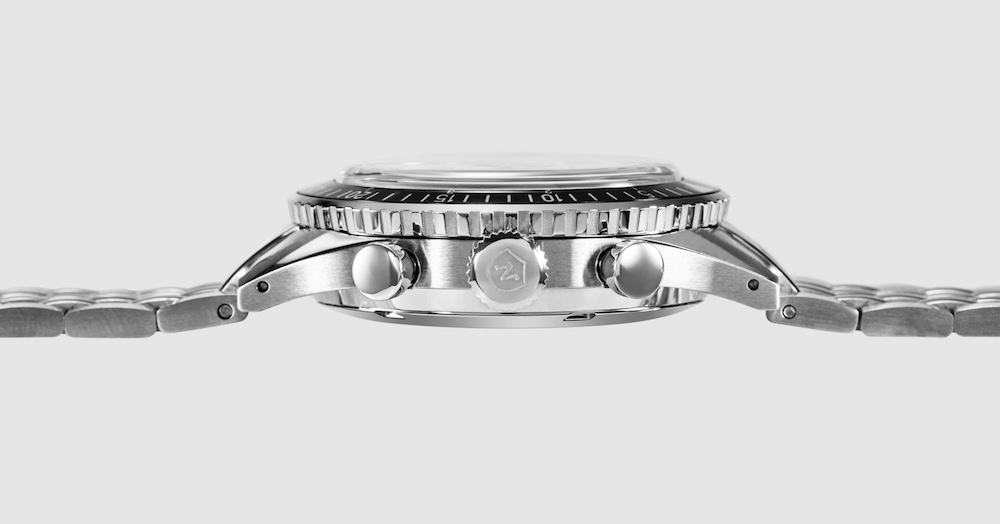 The chronograph movement, a Swiss made Sellita SW510 M BH b, is a manually winding cam lever chronograph, a favorite of micro brands in the $2k price range. (And as such will be easy to find service components for, should the need for servicing eventually arise.) The pushers are crisp and snappy, resulting in a satisfying actuation whenever timing or reset is engaged. While the crown is not a screw down, it is similarly sturdy and is large enough to be easily utilized.

As an aside (and contrary to popular opinion) this watch, with its chronograph complication and two sub dials (running seconds at 9 o’clock and 30 minute counter at 3 o’clock) is technically known as a ‘Uni-Compax’ and not ‘Bi-Compax’. Compax, in this instance, refers not to the number of subdials but instead that number of complications on the watch. Though at this point the term Bi-Compax has become so widely misused as to have practically taken on an entirely new meaning.

With specific reference, however, to the subdials, there is a special utility on the minute counter which is unique among most chronographs. The first five minutes, demarcated in red, counts down from 5 to 0, a useful segment for counting down short moments. The polished alpha style sub-dial hands are elegant and make for easy legibility, as does the highly polished broad arrow handset and bright white Super LumiNova. It should be noted, however, that a version is available with a faux-aged tan lume as well, should you feel the need to fully embrace the vintage vibe.

What is less legible is the tachymeter scale around the outer track of the dial, which can from many angles become distorted by the domed sapphire crystal – a minor gripe, seeing as most people will never utilize this feature for the calculation of speed. Truth be told, most dive watches never see the depths of the ocean, most chronographs never see a race track, and most pilot’s watches never see a cockpit. But it’s still really nice to know that one’s watch could go on such adventures if we so desired.

These are exceedingly handsome watches. The function-first design is as aesthetically pleasing as it was when it was first released nearly 60 years ago. While vintage examples can certainly be found, they are likely to be quite a bit more expensive than the modern equivalent – and quite a bit more fragile as well. Indeed, a common complaint for those who are either just getting into vintage watches or simply admire a less modern look, is that they need to be treated with such great care that they become functionally limited – what fun is it to wear a dive watch you can’t get wet, or a chronograph you’re too afraid to time things with?

The Nivada Grenchen Chronomaster Aviator Sea Diver (a mouthful of a name if ever there was one) is a watch that was originally designed for a new age of adventure and the modern adventurer who would embark on them. These are the kind of watches that are cool because they were designed with function first and foremost in mind. Every detail has a purpose and a utility. In recreating this off the beaten path classic, Nivada Grenchen has brought back a small piece of that Mid-Century romance we may have lost somewhere along the way. It is that same classic, rugged appeal that leads most people to desire tool watches in the first place. Because at the end of the day, an adventurer’s watch is only half of the equation – the other half is the adventures that you can have with the watch as your companion.

Troy Barmore is a watch, luxury, and heritage goods specialist and writer based in New York City. Growing up in the mountains of Colorado, Troy has had a passion for subtlety and detail since childhood. Whether it be denim, leather, eyewear or watches, he has made the study of quality goods a lifelong focus.