Despite the very New Zealand name, Kiwi was actually launched in Australia in 1906 (by a man with a New Zealand wife) and it’s since become phenomenally popular. In the US and UK it has two thirds of the market share and in Malaysia, the word ‘kiwi’ has even become part of the Malay language, meaning ‘to polish one’s shoes.’

Now, the company is best known for their boot polish but because I’m all about trying to find the best boot conditioner, I picked up the product they designed specifically for that purpose: Kiwi Conditioning Oil. It’s one of the top 5 best sellers on Amazon and it’s designed for oil tanned and other smooth leathers. I decided to try it out on a very, very old, never-conditioner pair of Clark’s Desert Boots to see how it performed.

Like most leather conditioners, Kiwi doesn’t disclose the ingredients on the tin. (It feels like this should be illegal, doesn’t it?) But I called up their parent company, S.C. Johnson, and found out that despite widespread belief that it contains mink oil, it’s actually a blend of paraffin, silicone, and solvents.

Paraffin is a translucent waxy solid which is not very oxygen permeable, so it’s decent at creating a barrier around the shoe and making it more water resistant. It has a really low melting point, it’s softer than beeswax and it applies quite easily, but it’s not quite as good as beeswax at the waterproofing.

Silicone bonds to leather, also making it more waterproof. Some people worry it can dry out the protein bonds, others think it’s not such a big deal.

Solvents, meanwhile, help to clean. Solvents are also controversial in conditioners, with some people saying they dry out the leather and others saying they’re really good for cleaning because they evaporate quickly. Let’s see what happens when I try them out on a very beat up pair of Clarks Desert Boots in beeswax leather. 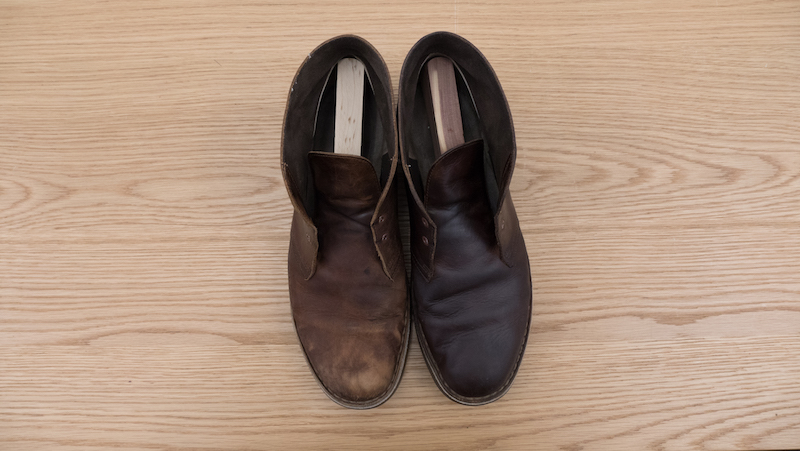 How to Use Kiwi Conditioning Oil

Kiwi notes that this is not for use on suede or delicate leathers and that it “may cause light colored leathers to darken.”

The oil is quite hard, so it needs to be heated up before applying. You might consider letting the tin sit in some hot water and applying it with a lint-free rag, but I just put a small amount in my (freshly washed) hands, rubbed ’em together to heat it up, and rubbed it all over the boots.

Then you wipe off the excess immediately and let it dry for a few hours. Here’s how it looked once I was done.

[See my review of the most popular shoe conditioner, Venetian Shoe Cream!] 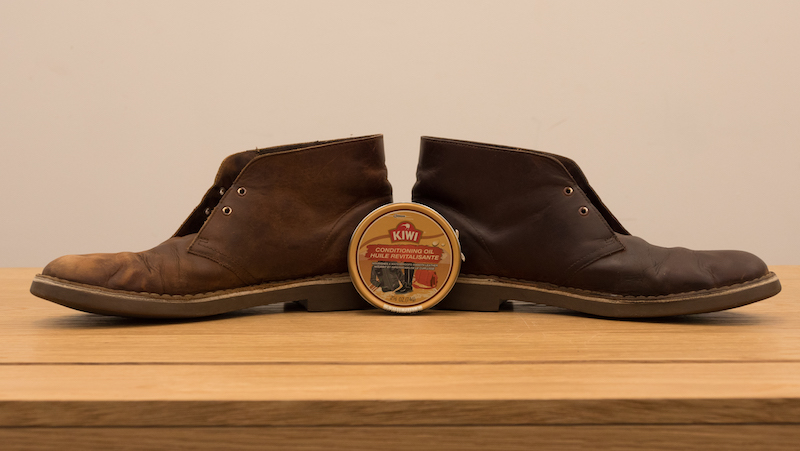 As you can see, the leather darkened pretty dramatically. The good news, though, is that the boots — which were several years old and hadn’t been conditioned once — are much more consistent in color, and the leather is softer and more pliable. Kiwi is known for penetrating very deeply into the leather and when I tried throwing some water droplets onto the boots, the conditioned one definitely beaded water away much more effectively than the old, dried out, catcher’s-mitt-looking boot on the left. 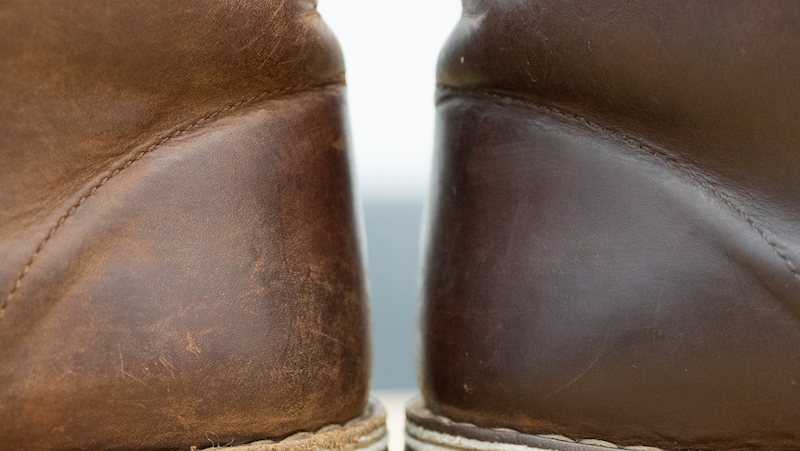 Conditioners vary a lot in their ingredients, which makes it hard to compare them across the board. Still, the cheapest you’ll find are brands like Lexol and Bick 4, which wind up at about $1 per ounce. Industry favorite Venetian Shoe Cream is about $3 per ounce, and then there’s the very underrated Cobbler’s Choice at $5 per ounce and the crème de la crème, Saphir Renovateur, for $9 an ounce.

So on the spectrum of conditioners, Kiwi is definitely on the cheaper side. 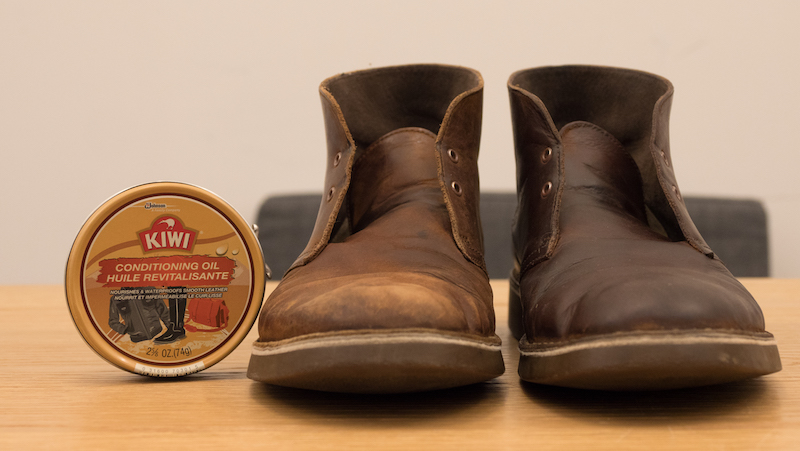 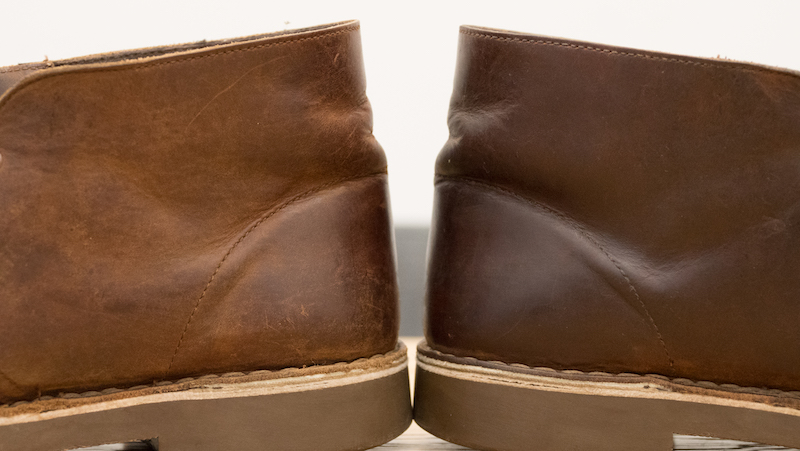 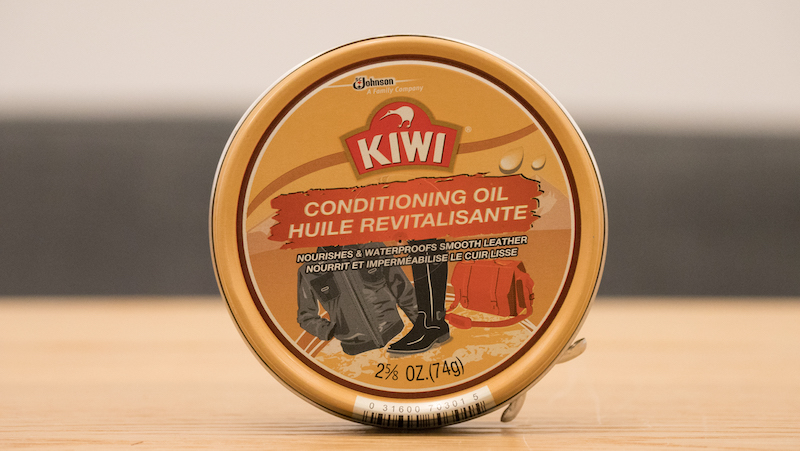 So is Kiwi Conditioning Oil right for you? Well, it darkens the hell out of your leather, so if that’s a problem then it’s off limits. But for a lot of guys, they don’t care: they want something that will increase water resistance and clean and moisturize the leather without costing too much. If those are your goals, Kiwi is a very solid pick. I wouldn’t use it on dressier boots — it’s not good if you’re looking for a polish — but if your rough and tumble, outdoorsy boots need to be more weather resistant, it fits the bill.