For what I would consider America’s most beloved heritage boot company, Red Wing has had a surprisingly spotty history with Chelseas.

Maybe that’s because this slip on boot’s origins aren’t in American workwear like most of the company’s boots, but because Chelseas started out as horse riding boots in Victorian England — they’re said to have been invented for Queen Victoria as a walking boot and then became common among the upper class horse stables. None of this is evocative of the rugged American working man boots that Red Wing’s known for.

But nowadays, of course, Chelsea boots are common everywhere, from suits to farms and everywhere in between — but Red Wing hasn’t had much success keeping a Chelsea in stock long term. Prior to their new Classic Chelsea, the brand had the Rancher, a similar boot with a hard mini lug outsole like the Iron Ranger, and then they had the Weekender Chelsea, a leisure boot with a much lower profile and lighter weight. Neither are being sold today.

The Classic Chelsea is both revolutionary and a return to the brand’s roots.

This time around Red Wing has tried to stay truer to its roots, devising something about as close to a heritage work boot as a Chelsea can get: a round toe, a thick wedge sole, and resoleable Goodyear welt construction.

In fact, I’d say this is the chunkiest Chelsea I’ve ever seen and it really stands out in the market. These days, there’s no shortage of guys who see Chelseas in their mind’s eye as a long, lean boot typically made with luxurious calfskin and a leather sole —  something best suited for suits. (The Carmina Chelsea is a perfect example.) Indeed, after over a hundred years of existence (including a famous spell as the Beatles’ favorite dress boot) popular fashion has placed the Chelsea in the smart casual category: they’re not normally paired with suits but they’re not often dressed down to t-shirts and baggy jeans.

So, while to the untrained eye (and to those that don’t spend their lives obsessing about boot trends like me) the Classic Chelsea might just look like, well, a Chelsea, it’s actually pretty daring as an entry into heritage footwear.

This boot comes in three leathers right now. My pair is Hawthorne Muleskinner, Red Wing’s name for their waxed roughout. Roughout is essentially leather flipped inside out: the fuzzy “nap” of the flesh side is on the outside of the boot and the smooth skin side is on the inside. It’s often mistaken for suede, but roughout is thicker, tougher, and much more resistant to scratching. The wax is applied to improve water resistance and it helps the boot to accrue a lovely patina. (Wax often does; see canvas jackets for more examples.)

The other two are full grain leathers from Red Wing’s own tannery, SB Foot Tanning Co. It’s fair to say Amber Harness is the flagship leather of the brand’s flagship boot, the Iron Ranger, while the Ebony Harness is a very dark brown that’s practically black, coupled with a black outsole.

All of these leathers are chrome tanned and quite thick at ~2.1 millimeters; they’ll last for years to come and help to cement the fact that these are no dainty dress boots.

[Related: Chukka vs Chelsea, Which Is for You?] 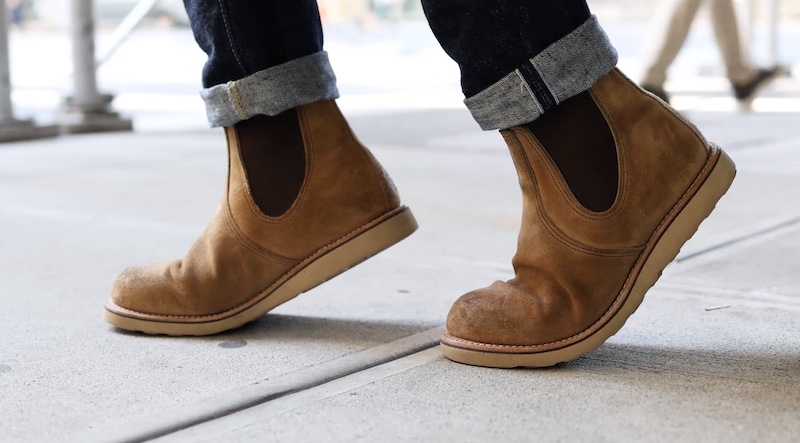 Here’s where things get really different.

Typically, Red Wing Heritage boots are made with a vegetable tanned leather insole, cork filling, rubber midsole, and a rubber outsole. This is a very traditional boot construction: the leather and cork mold to the shape of the foot over time, making for a shoe that becomes more comfortable and feels more “custom” to your foot over time.

But Red Wing wanted the Classic Chelsea to be something different, a boot more comfortable from the get go that could potentially attract more customers to Goodyear welted footwear. The layers are:

So there are three big differences here that are largely intended to reduce Red Wing’s famously tough break in: the softer leather insole, the poron, and the texon, the latter two helping to provide extra shock absorption as well.

In addition, there’s “Space Air mesh” lining the toebox, a mesh that helps air to circulate around the foot and increase the sense of the boot’s breathability. As someone who wore the boots for six months, I must say that they are remarkably flexible and I never felt like my feet were overheating.

When I posted the video about these boots to YouTube, I was surprised by how many guys were upset with the new construction, insisting that Red Wing should stick to their classic work boot roots and avoid straying into higher tech materials. It’s true that shock absorbing foams like these tend to flatten over time and the boot won’t have the same “custom” feeling down the line, given the cork is covered with foam and the footbed is softer than your standard vegetable tanned leather. But these additions do indeed make for a more comfortable experience from the get go and I think it serves an important part of the market that probably wouldn’t want to endure “normal” boot construction for too long.

[Related: Why People Are Putting Foam in Boots] 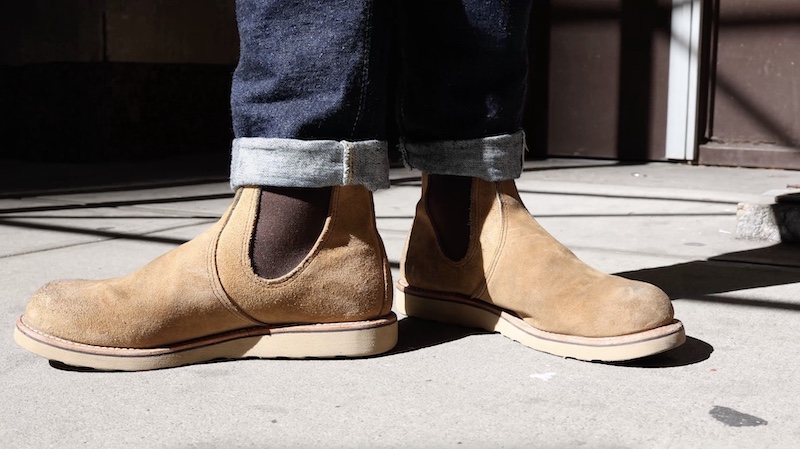 If you’re trying to work out sizing, order a half size down from your true size — that doesn’t mean your sneaker size. Usually, sneakers are sized a half size larger than your ‘true’ size and boots are a half size smaller. The way to check is to put your foot on a Brannock device, the one you use in shoe stores: I’m an 11 in boots, 11.5 on a Brannock, and 12 in most sneakers.

The Classic Chelsea is made on the same “No. 8” last as their Iron Ranger and Blacksmith, so you can feel comfortable picking your usual Red Wing size if you have any of their other boots. It’s a fairly roomy last and if you have E width feet there’s a good chance they’ll fit into these, but the boot isn’t currently offered in any wider widths. 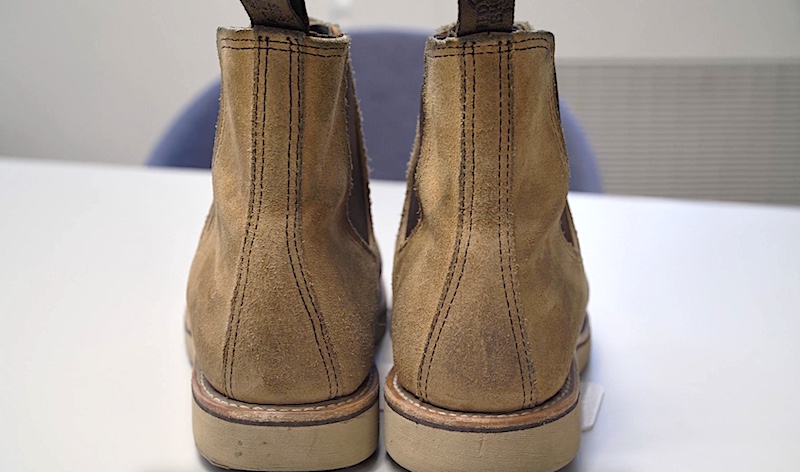 This is the same price as Red Wing’s moc toes and Blacksmith, so it’s about what I’d expect for a Red Wing Heritage boot like this. For a Goodyear welted boot made in America, Red Wing is always pretty good value — not phenomenal value, but they’re always a good 20 bucks less than I’d expect to pay from another brand.

To sum up, this is a groundbreaking boot in many ways. It’s a symbol of Red Wing bringing the Chelsea model to the company’s work boot roots and it’s a very rare example of a Chelsea work boot. It’s not a smart casual boot or a horse riding boot and a Chelsea that is both roomy and well constructed is rare.

Red Wing has made something that stands out, and I think will appeal to guys who want more of a heritage work boot vibe from their footwear — and yet the wedge sole and the last also make it pretty streetwear friendly. As much as I liked the Rancher Chelsea (the discontinued one with a hard lug outsole), I think Red Wing made the right choice by pairing this very casual round toe with the very casual cristy sole.

It’s a Chelsea that works, in other words.

Some people find it off putting to see a Chelsea that’s so roomy and so far out of its natural habitat of smart casual wear or business casual wear, but if you’ve always wanted to see a more casual and robust Chelsea, Red Wing has done something new for the market — and that’s not something I often get to sav about boots.