It’s not just the toecap. While they’re made on the same last so they fit the same way, there are more differences than you might think between Red Wing’s flagship boots, the Iron Ranger and the Blacksmith.

Red Wing is everyone’s first Goodyear welted boot. My own was their moc toe, and I swiftly followed up with Iron Rangers as my second “grown up” boot purchase to help me navigate New York winters. Note that I conditioned those Iron Rangers with some too-thick conditioner a few years ago, so they’ve darkened considerably, but these are the classic 8111 Amber Harness Iron Rangers I’m wearing in these photos, contrasted with the 3340 Blacksmith boots in the famously reddish Briar Oil Slick leather.

What are the similarities between these iconic boots?

The differences are something a lot of people wonder about, so let’s start with the obvious one. 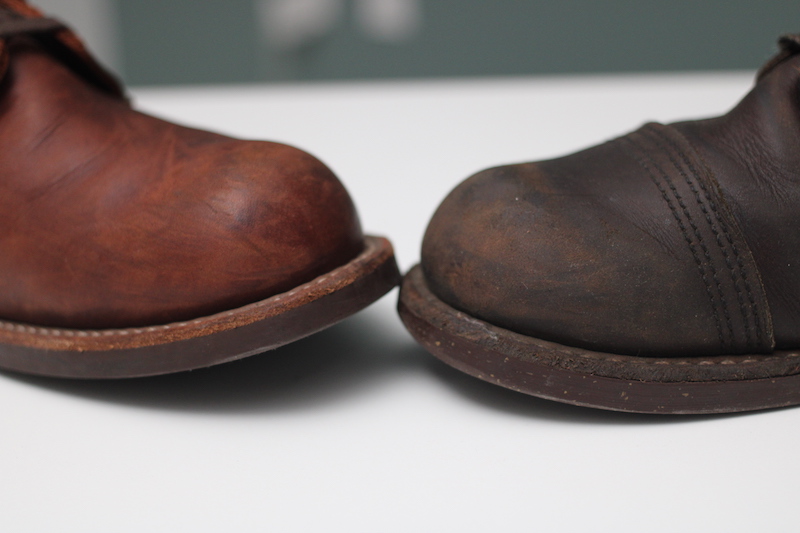 The Iron Ranger has a toecap, the Blacksmith doesn’t.

Pretty simple stuff, though it’s worth emphasizing the Iron Ranger’s toecap is real: it’s an actual extra layer of leather over the toe of the boot, secured with four stitches. So while it’s not a steel toe boot, the toecap does offer a modicum of extra protection relative to the Blacksmith, which is probably why there’s a difference in… 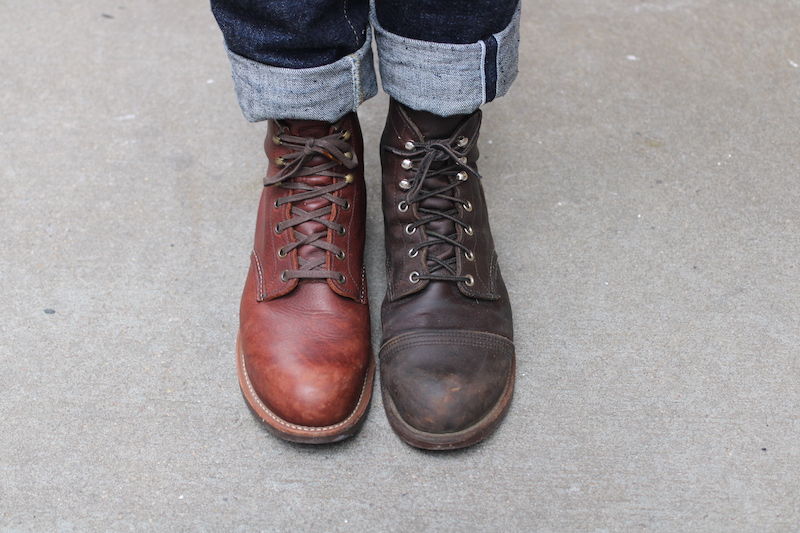 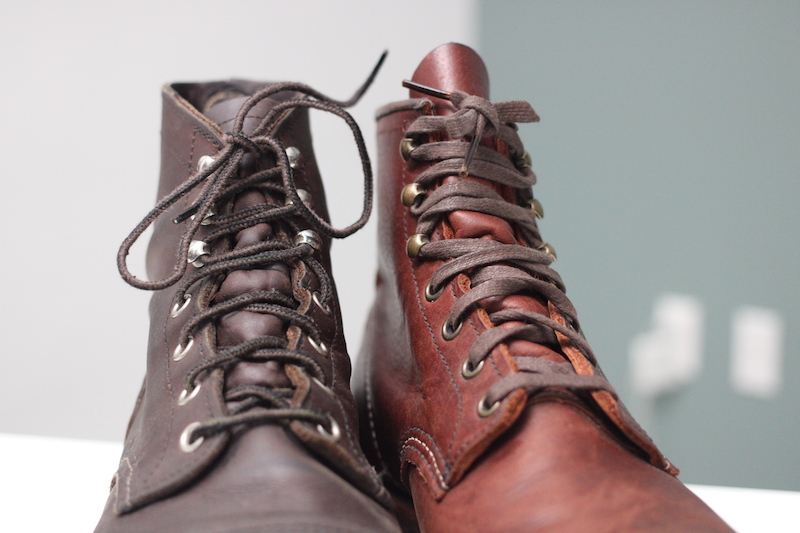 Iron Rangers come with these round, parachute cord, nylon laces, the Blacksmiths are flat waxed cotton.

The waxed cotton laces are stickier and a little more annoying to work with, but less likely to come undone, plus they’re just a little bit dressier.

That’s the main bullet point when comparing these boots: while they’re both very casual, the Blacksmith dresses up ever so slightly better.

Another reason why is… 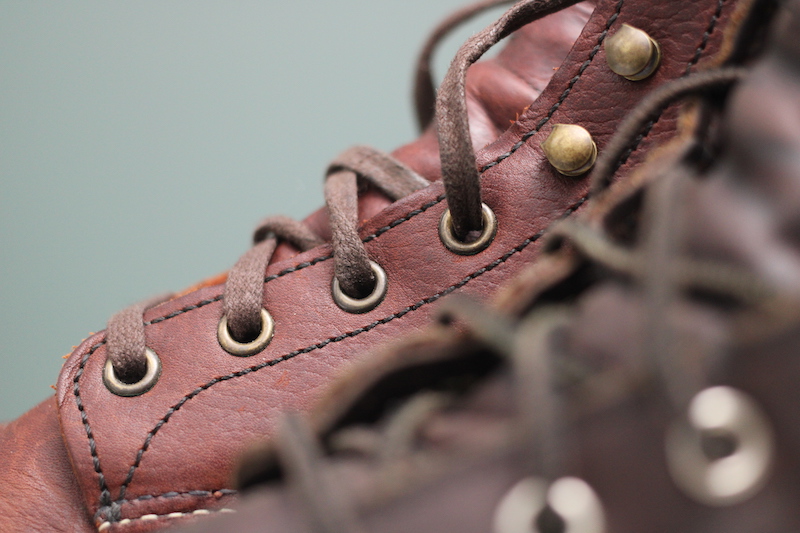 They’re shiny nickel on the Iron Ranger and dull gilt on the Blacksmiths.

Unlike Red Wing’s moc toes, both of these boots have three pairs of speed hooks, which makes them easier to get on and off. 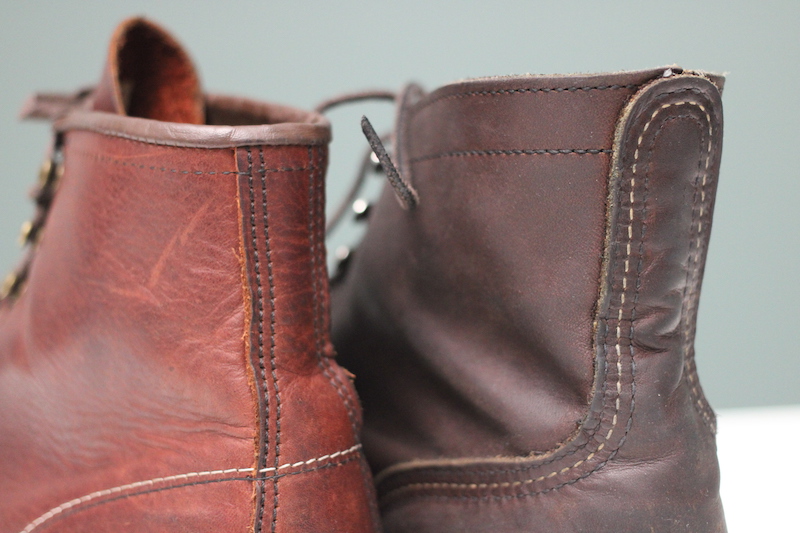 The collar — that’s the opening at the top of the boot where you slide your foot in — has a few differences, but I wanted this to be a list of ten and not eleven differences, so I’m lumping them all into this entry! They are:

“Rolled” means there’s another piece of leather rolled over the top of the edges on the top of the shaft. That takes a bit more labor to do, but over time the edge is less likely to get frayed if it’s rolled.

While we’re talking about the shaft… 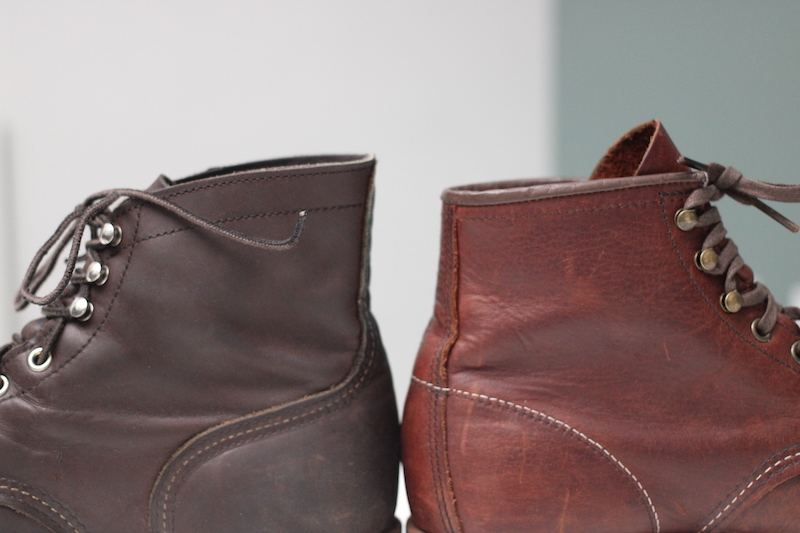 The iron ranger is about a half inch taller before it starts to swoop downward. I measured the Iron Ranger at ~6.25 inches high at its highest and the Blacksmith at ~5.75 inches. 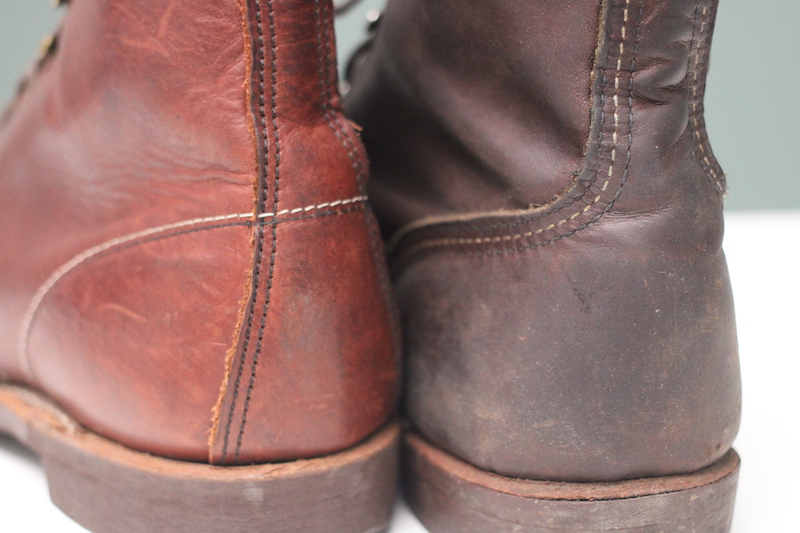 That’s the name for the strip of leather running up the back of the heel.

So the backstay is broader on the Iron Ranger and offers a bit more protection to the heels, since it results in two pieces of leather covering them. 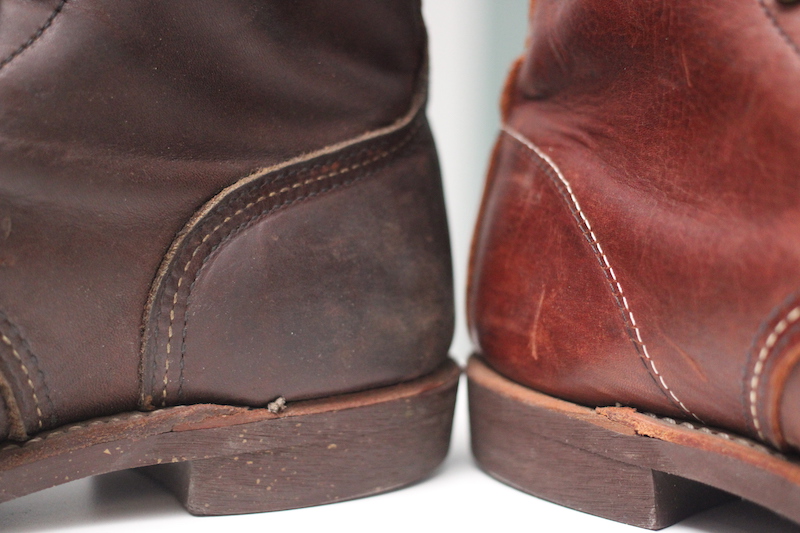 One could argue the extra stitch makes the Iron Ranger more heavy duty, but it’s very unlikely that there’s any practical advantage as far as durability goes, at least with regard to the stitching. (The argument is stronger if you believe the Iron Ranger offers more protection because it has more leather covering the heel and the toe.) 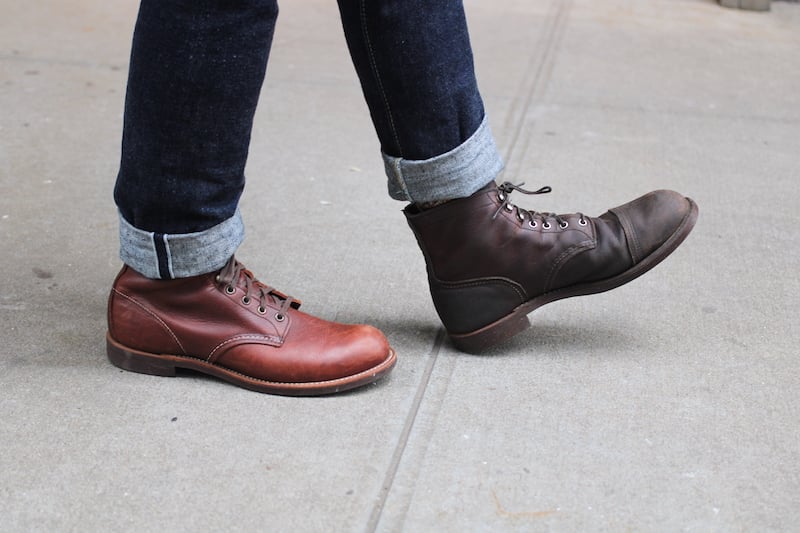 The fit is exactly the same between both boots, as they’re both made on Red Wing’s No. 8 last with a nice roomy toe.

But only the Iron Ranger is available in wider widths.

This No. 8 last is fairly roomy in the toes, and many find they fit D (normal) and wide (E) feet, but if you’re any wider, only Iron Rangers come with the option for EE.

While all of Red Wing’s leather uppers come from their own tannery, SB Foot Tanning Company, you don’t get the same options for both shoes. 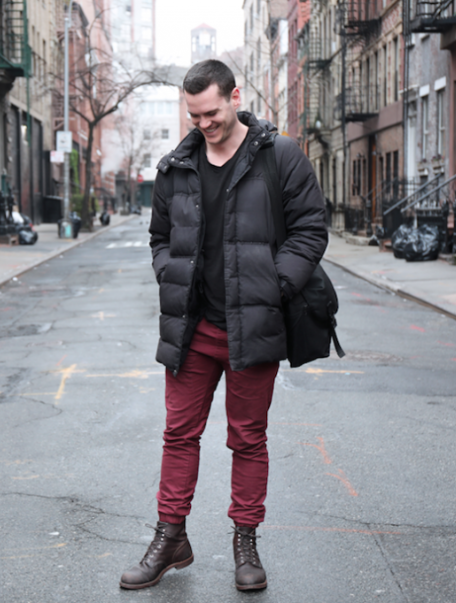 There it is! Ten differences between Red Wing’s most beloved boots. For more info on these classics, be sure to check out my Iron Ranger review and Blacksmith review.