There are more than a few brands that claim they’ve made the thickest, heaviest denim on Earth, but none of them have come close to Naked & Famous’s genre-defining, barrier-smashing, thigh-butchering offering of forty ounces.

For context, the weight (and therefore thickness) of most fabrics is measured in ounces per square yard. The average pair of jeans is about 10 to 12 ounces. One of Naked & Famous’ most famous offerings is their “Super Heavyweight” 32-ounce denim.

In this video below, I stopped by the company’s global headquarters in Montreal to chat with founder and CEO Brandon Svarc about how they managed to create the heaviest jeans on Earth — and then, years later, create something even heavier.

Here’s the tale of how they made 32oz jeans and why they decided to break that record with 40 ounces — the thickest denim anyone’s ever made.

“Guaranteed uncomfortable, or your money back,” says Svarc.

Let’s start off with the 32oz monsters.

“At the time that we made the 32 oz, they were for sure the heaviest jeans ever produced.” says Brandon, who drew a distinction between their product and companies that created one-offs that were heavier in the years that followed. “You can make a car with a jet engine on the back and say it’s the fastest car, but you can’t say it’s the fastest produced car. It’s not the fastest model. We made hundreds of pairs of and actually sold them, so that’s why we think that this one is the heaviest jean ever produced.”

How is 32 Ounce Denim Made?

Naked & Famous employs a mill in Okayama, Japan to produce the fabric. And because the Japanese are very exacting about the authenticity of the products, they make it on vintage shuttle looms. Regular selvedge denim is a very labor-intensive product to produce, intentionally old-fashioned and somewhat inefficient by modern standards, but the old-timey way of producing denim makes can produce material that’s thicker, tougher, more traditional, and entirely unique.

This super thick 32-ounce denim is much harder to produce than your regular, 12-ish ounce denim. The yarn they use is more like material used for carpet or sailboat sails and only three pairs can be made per day — it’s very labor-intensive.

[Related: 7 Reasons Japanese Denim Is So Expensive — And Why It’s Worth It]

Why Would Anyone Make 32 Ounce Denim?

Before we go any further, you’re probably asking yourself, why?

Why would anyone do this — no one needs 32-ounce denim — and Brandon’s answer was fairly straightforward:

Because nobody else is going to make them and we wanted to be the first to make production of the 32 ounce jeans. We did, I just think its amazing. I think it’s like a marvel of creation.

This is a passion project, a product for denim fanatics who want the experience of the heaviest jeans you can buy. (For now.)

But, believe it or not, there are some practical uses for denim this thick.

One of their customers sent an e-mail describing how his 32-oz jeans saved him during a motorcycle crash.  “You saved my like legs, I had no road rash. My motorcycle went like 20 feet off that way and was demolished and I slid 40 feet in the other direction and I was fine.” (Paramedics had to cut the jeans off, but insurance covered a new pair.)

But these are mainly for collectors and denim enthusiasts.

The store manager of Naked & Famous’ Montreal store, Garret, wore these every day for three years. My thickest pair of jeans is Brave Star’s 21.5-ounce jeans, and they are none too comfortable in the heat — but Garrett even wore his when he lived in sub-tropical Hong Kong, where the average temperature is above 85° C and the humidity is above 80% for at least 4 months out of the year.

How did he do it?

“Mind over matter,” he says, “You just have to focus your mind and forget about your legs. (..) I wore these for about a thousand wears plus, no washes, one soak.”

Just to review, 32 once denim uses yarn more akin to thick carpeting than any pair of jeans you’ve likely ever owned, and it can protect against road rash like leather.

I guess the only thing a guy can do is make thicker denim, right?

How does one do that? 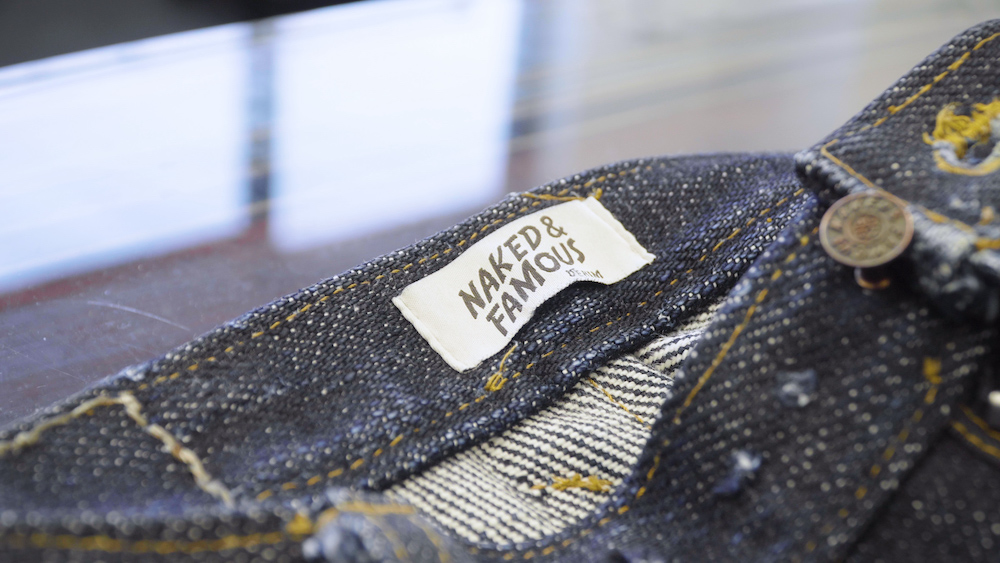 “It was really funny because they were having so much trouble making the fabric and they were really not getting it. I went to visit the mill and the day that we visited the mill, the machine started to work as if it was some kind of piece of magic. They were shocked.”

If you want to replicate this denim you not only need your own modified shuttle loom, you also need literal magic. Fortunately, Brandon has both.

Garret also gets to wear this 40 oz denim, and I asked him about the difference between the two.

Oh it’s huge. The 32 oz, I’d say, if you break them in normally, it’s like 1 week to 2 weeks and they’re pretty comfortable. They’re just like a thick pair of sweatpants, basically. The 40 oz, I would say, they’re still not fully broken in. It’s a completely different piece of fabric.

He showed me the honeycombs or combing, the patina on the leg where the fabric fades from friction and creasing. The 32 had a fair bit, but the 40 oz was so thick there was just one line of fading, like someone bent a piece of aluminum. 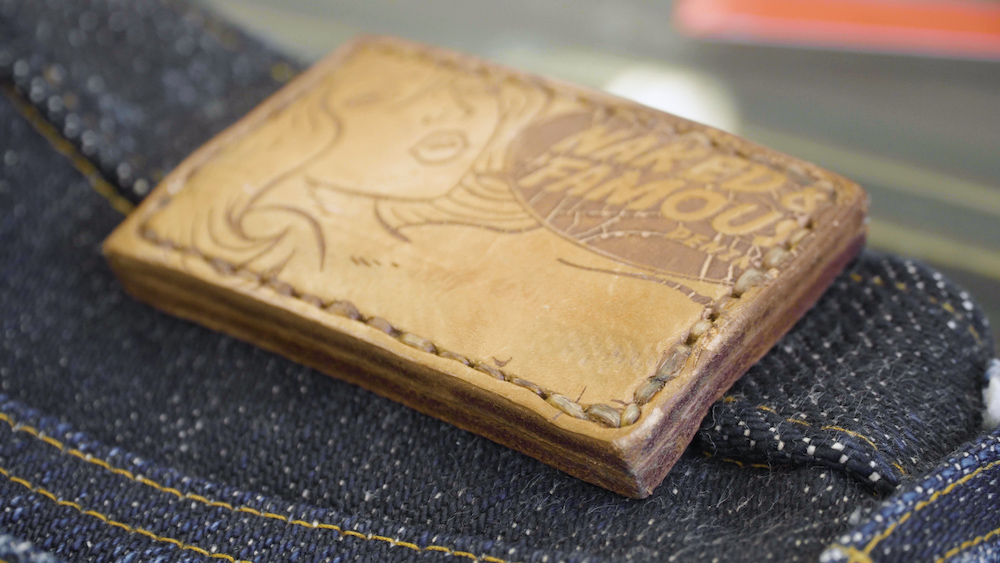 “We would never claim that it’s a jean for everyone,” Brandon told me. “But for the fanatics who love, heavyweight denim I mean this is the superlative. We love things that are superlatives. It’s also the superlative patch.”

So what’s up with that patch? It’s incredibly thick: 30 ounces of leather. “We took two 15-ounce leather patches — which is already ridiculous on itself, that’s what the the the 32-ounce jeans have — aand we took two of them and sewed it on by hand with sinew thread.”

So when can you buy the mythic 40-ounce jeans?

“We don’t know when. It’s impossible. People ask us when are these coming, we don’t know the answer ourselves. We are, like ‘you literally need magic.'”

So stay tuned folks — the minute I know when these magical, deer-sinewed, thicker than sailboat sail denim jeans are available, I’ll let you know.