Invading the dreams of denim enthusiasts and warping reality is par for the course at Naked & Famous. From the same guys who brought you color changing denim, Matrix themed leather denim, scratch and sniff jeans and more of the world’s weirdest jeans, this is a brand that revels in the weird and wild.

So it’s not shocking that they’ve produced yet another classic movie themed crossover. Partnering with Wes Craven’s 1984 Horror Classic A Nightmare on Elm Street, they’ve conjured up some wicked denim that whispers, “Come to Freddy.”

Back in the waking world, Bahzad Trinos, the lead Designer at Naked Famous said,

As a lifelong Freddy fan, it’s a great honor to mix my passion for Horror films and Japanese denim together. Freddy often takes mysterious forms, what better than a killer pair of jeans!

Let’s go down a darkened staircase and take a closer look at these jeans. Let’s split up, I’ll be right back. 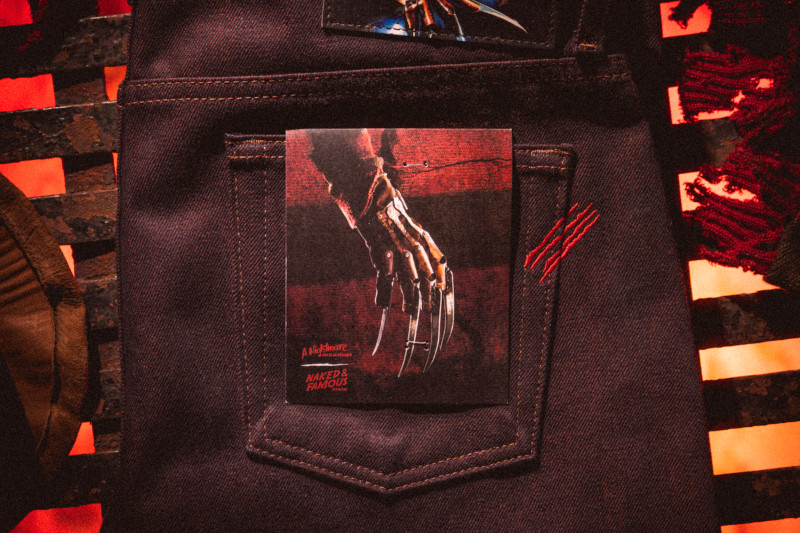 Naked & Famous likes to have fun with their creations, and the Springwood Slasher Selvedge is no different, but the attention to nostalgic detail isn’t cheeky — it’s deadly serious. 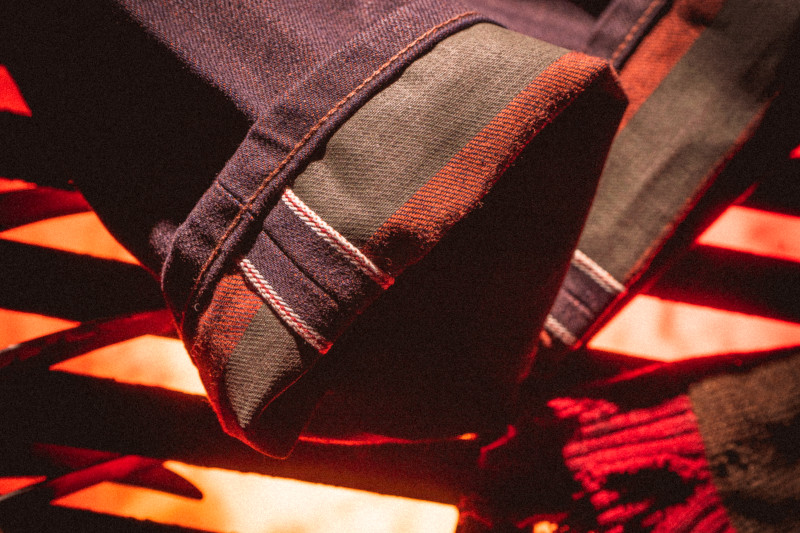 Loaded with subtle references to the not-so-subtle Kruger, the jeans are built with stiff, 12.5 oz custom milled Japanese denim. The fabric has a red dyed weft interior that leaves a noticeable blood-like hue peaking through the indigo rope-dyed denim.

Other Kruger inspired kitsch includes red and green painted interior as an homage to Freddy’s iconic sweater. They pull off a red-green color combo by using darker shades that contrast well and look striking — without looking Christmas-y — when you flip the cuff.

Freddy’s burnt skin print pocket bags are a gruesome touch. (You may recall he was burned to death by his victims’ parents.) The reflective buttons and rivets glimmer like a clawed glove — being a sadomasochistic dream demon requires a certain level of panache, after all.

Because it’s not a horror flick without some slashin’, the full colored printed leather patch features Freddy in all of his charred glory. While the embroidered claw mark scratches on the back pocket, contrast stitching, and a blood red ticker on the selvedge ID round out the child-dream-murder fun. 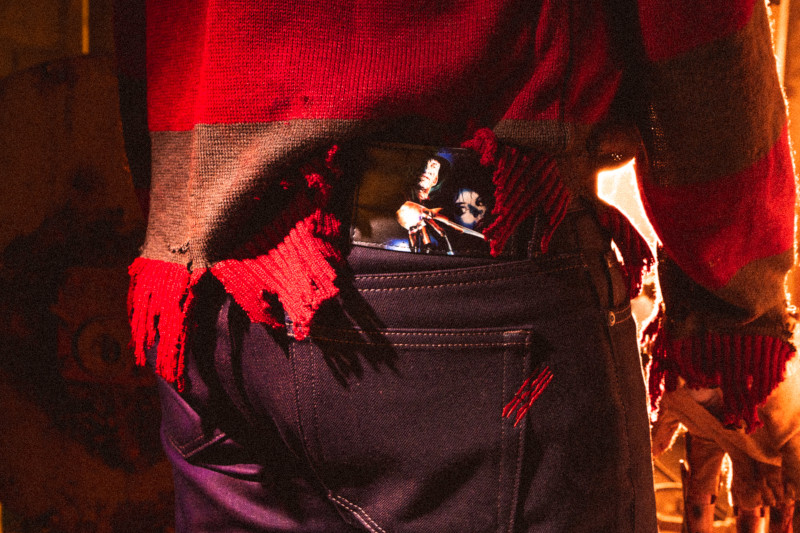 Certain to appeal to the horror flick fan who also likes high-end casual menswear, I wouldn’t be horrified to find a pair of these in same closet as Naked & Famous’s Friday the 13th Jason Vorhees selvedge. Nor do they look too crass for just wearing to pub, especially if you like pontificating about black-humored 80s slasher flicks with uncomfortable sexual undertones. Who doesn’t like strangers gabbing about dream demons in darkly lit bars?