My father is a self-made man through-and-through. Despite not attending college he has been a photographer, race-car driver, stable-hand at Belmont, moving truck driver, and now a small business owner. He can fix anything: be it a car, something on their house — which he built mind you — and even some electronics.

But my father does not put nearly as much effort into dressing well. He is the kind of guy who only shops at the Kohl’s clearance section.

A few Thanksgivings ago I was at my parents’ and we were rushing out the door to dinner. My dad came down the stairs, still putting on his belt and POOF, the belt decided to perfectly split into three strips. The adhesive that bonded the faux leather, cardboard, and vinyl comically failed all at once. His three-ply, 2-year-old, 19-dollar Kohl’s belt tore as he pulled it on.

My dad lamented that this belt had barely reached two years old and cursed that it was 80% paper. Getting into the car still holding his pants up, I asked him why he doesn’t spend a little more on a quality belt. And he responded that he has always paid about $20 for a belt and that, of course, “department store belts used to last longer.”

Which brought us to a discussion of how profit margins and better material science have made department store clothes disposable.

Back in the 1970s and 1980s the machinery and materials needed to make a three-ply, cardboard filled, bonded belt were so expensive that it was only a small cost benefit from using a strip of real leather. But now as manufacturing has streamlined and outsourcing has lowered costs, it has become easier to make items more cheaply.

My dad needed to, and we all need to, continually adjust our price perception and question product quality. Department store items are good for one year, and the price you pay is only for that—a belt for one year.

So, for Christmas I knew exactly what to get my dad: a full-grain belt with a solid brass buckle.

[Related: Why I Fell in Love With the Belts from Pigeon Tree Crafting]

How I Picked My Dad’s Next Belt

I did my research on reddit, I searched for an American tannery, and I chose a color that best fits his usual attire.

My father is rarely in business casual or formal, so I knew that a wider (1.5”) belt is better — thinner belts (1.25”) are generally considered dressier.

Full grain leather is important for long term durability and generally looks better as it ages – and with all of the great tanneries in the U.S. there is no reason NOT to go with American made. Horween Leather Company and Hermann Oak Leather Co come to mind.

I sweat the details.

I also looked for a pressed stud on the fold. The metal rivets provide more confidence that a break will never happen, and my dad will make it to the next Thanksgiving dinner on time! 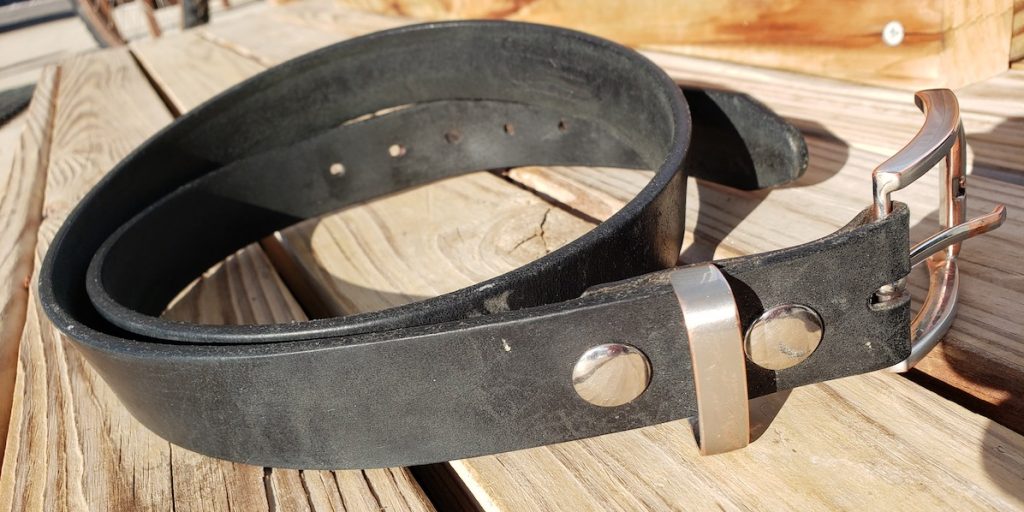 I decided to purchase him a $58 belt from the Orion Leather Company out of South Carolina—which is unfortunately no longer in business. (There are a few other tanneries with similar names, but these are not where I bought my father’s belt.)

But if you are on the hunt for a solid, American-made belt, some great alternatives are:

Expect to pay somewhere between $50 and $150 for a quality belt. It’s some five times more expensive than a department store belt, but it will last ten times as long and actually look good as it ages, as opposed to looking like a worn out chew toy.

Since I bought my father’s belt, I’m pretty confident that this is the most expensive item my dad wears each day, but I like knowing that it’s something he can wear every day. And because it’s a quality, full-grain, Texas tanned leather, he will be able to wear for years to come.

I almost want my dad’s belt to break so I can get him a new one.

But I know, given my criteria for picking a belt, that’ll take decades!