After collecting my fair share of boots over the years, I began comparing and contrasting these quality wardrobe staples against other elements of my day to day wear. It’s the constant struggle of leveling up in one area, and then seeing room for improvement in other areas that have been neglected.

The struggle of finding a good belt had been real, and had gone on for years. I perused everywhere, and even scoured high end luxury shops while traveling, seeking the pinnacle of fine belts to match my boots. I had settled on some genuine leather belts from major retailers that are nice, but still there was something missing.

I heard of Pigeon Tree Crafting and the owner, Isaac Paul, from several of the people I follow on Instagram. The belts looked cool, so I decided to look at Isaac’s inventory. Initially I was overwhelmed because as familiar as I was with fine leathers like Chromexcel, shell cordovan, roughouts, suedes, etc, I was extremely unfamiliar with the leathers Isaac was using!

“What is natural veg tan?”

I took a long hard look at my belt inventory at the time and decided to go ahead and try out the natural veg tan belt with the nickel-plated copper buckle. I was a bit worried at first that the unconventional quick-release buckle would be too fashion-forward, edgy, and outspoken for my style. Then the thing arrived, and I was blown away. 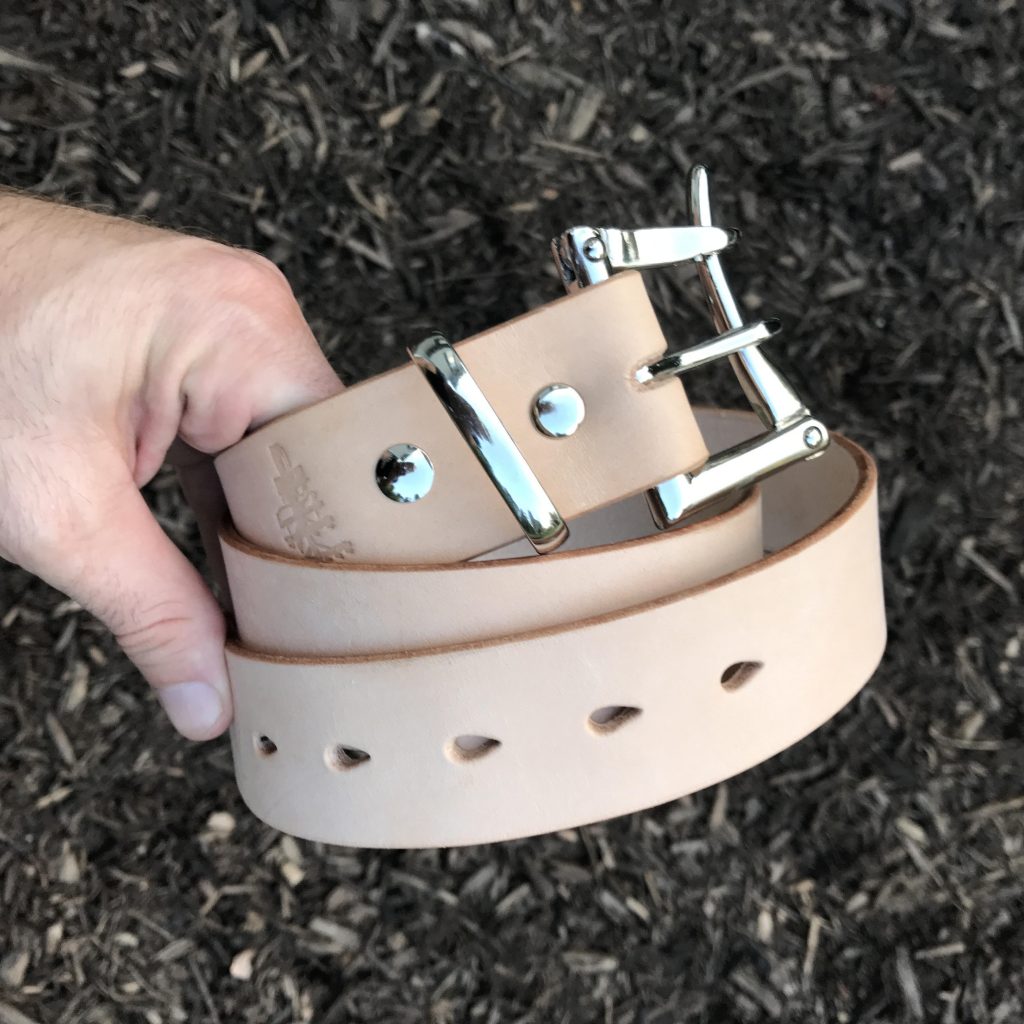 Similar to the experience of wearing my first pair of Alden Indy boots, this was akin to stepping into another dimension I never knew existed. The thick, sturdy, unflinching quality of this belt was unlike anything I had ever owned. It was my first real belt.

I started wearing it and began to understand the nuances of the quick release buckle, which in my opinion has become iconic and best encapsulates the image of Pigeon Tree Crafting. I was worried at first about how it would hold together, but it does so by tension.

The story behind the quick release buckle is interesting because it’s actually rooted in firefighter equipment. Known as the “firefighter” quick release buckle, it was used to keep firehoses wrapped up, allowing firemen to release the buckle quickly to access the hose in the event of an emergency.

That’s what’s so fun about these belts: the act of fastening/unfastening them. What I’ve come to love about my wardrobe items doesn’t stem from how they look, necessarily, but my interaction with them. Every time I unfasten the belt, the smooth lever action and instant release of the buckle is a joy to operate.

These belts are stunning to look at, and do not scream gaudiness or “I want attention.” It’s surprisingly subtle, but a statement piece. You’re not going to see anybody else (except for on Instagram) wearing these belts, it’s something that is unique, it stands out from the crowd, and it says “hey, I actually have good taste in belts.”

The fact that you care about as seemingly minor a detail as a belt shows that you really consider every aspect of your wardrobe. It shows that you think deeply, carefully, and methodically about each item before putting it on.

[Related: How getting interested in boots made me a better dresser]

The Man Behind the Belts

I became so enamored with these belts I actually formed a friendship with the owner, Isaac, who is an incredible guy and an amazing entrepreneur.

Similar to how with a boot you can have different options for the material of the upper, the sole, the eyelets, laces, etc; so too do you have the option to customize your belt into its own makeup. I’ve learned all kinds of things about belt terminology through Isaac, such as considering the buckle, the prong, the keeper, the rivets, and even the holes: teardrop or standard, (I’ve always gone for teardrop) are all aspects of the design of the belt that you control when ordering one of these!

Probably my favorite of my collection is my burgundy Sedgwick belt which is accompanied by a copper prong, copper keeper, and black buckle. The thing is seriously stunning, and it’s the perfect shade of burgundy to go with color 8 as well as standard brown chromexcel. It’s probably the one that gets the most wear out of my current rotation.

After I had acquired six belts and had one of my old belts modified by Isaac, he announced that he had filed a patent for a double prong buckle, and I knew then that there were going to be more belts to order! Thankfully, Isaac made it easy by making available the Havana Sedgwick with brass buckle, which I did not hesitate to jump on.

My collection of these just keeps growing, and to be honest, I doubt I’ll ever get to a point where enough is enough. In fact my newest pair of boots in whiskey shell cordovan are a particular hue of yellow which can only be matched by either the PTC London tan Sedgwick English bridle leather, or the brown tarnsjo belt. I’m waiting on some comparison shots from Isaac before I make the final determination.

All in all this is just another area of my collecting that I don’t believe is rooted in materialism, but rather in passion for surrounding yourself with, utilizing, and wearing fine quality handmade items.

And yes, these belts might cost around double compared to what you’ll find at the mall. But the quality is easily twenty times better, they will last you a lifetime, and they’re made by one American entrepreneur. To me, it’s a no-brainer.