When it comes to my boot collecting habit, I can’t help but get philosophical about it.

There was something magical and transcendent about the moment I handled my first pair of Alden Indy Boots. Not only were the top-quality materials like the Horween Chromexcel leather and neo-cork sole enough to make you drool, but then you get to actually wear the things. Fast forward 5 years and my boot collection and fascination with the industry have grown considerably. So are a few reasons why I’m captivated by great boots and why there is such a sub-culture growing around this subject.

I used to have the impression that to buy or wear boots you needed a specific reason. People associate the idea of durable, well-made boots with a certain profession or activity. It was like you needed an excuse to wear them. Common critiques include:

“You’re not a carpenter, a roofer, a foot soldier, you don’t work in construction, and you’re not hiking the Appalachian trail any time soon, so why would you need expensive boots?!?”

While many modern heritage boot styles were originally designed to accommodate specific utilitarian purposes, that does not mean they’re restricted or confined to said purpose. Amazing boots can be worn every day, all the time, no matter what you’re doing: strolling through the park, grabbing a latte, getting groceries, whatever! The idea of wearing a boot as an absolute necessity has diminished in my eyes, and we don’t need an “excuse” to wear them!

[See my review of the Alden Indy here!]

[Related: 6 reasons you can wear boots any time of year]

Walking is the most fundamental human activity we perform, it’s our core means of transportation, and it’s our direct connection to the ground and observing the world around us.

We’re taught that humans are special in the animal kingdom because we can stand upright and walk on two legs. In many ways, walking makes us human. If this is the case, I would argue that it’s essential to perform this activity with the best possible tool to maximize that reality. We want the best cars to drive in, the best houses to live in, but when it comes to footwear, most people I know go for the cheapest stuff they can find. But why? Why should our footwear be an afterthought?

Well, for me, footwear was an afterthought for much of my life.

My approach to style began from the top-down rather the ground-up. In my teens I was obsessed with spiking my hair (yes, frosted tips unfortunately). In my early 20s it was all about graphic Ts and nice sweaters. In my mid 20s I developed a pretty intense fascination with Swiss-made watches and other high-end luxury goods. In my late 20s I focused on building up a strong professional suit wardrobe.

But I never paid much attention to boots. In fact I remember seeing expensive footwear in magazines and scoffing at the prices. “Why would you spend so much money on something that trudges on the ground and steps in mud.”

Oh, how flawed my thinking was at the time. 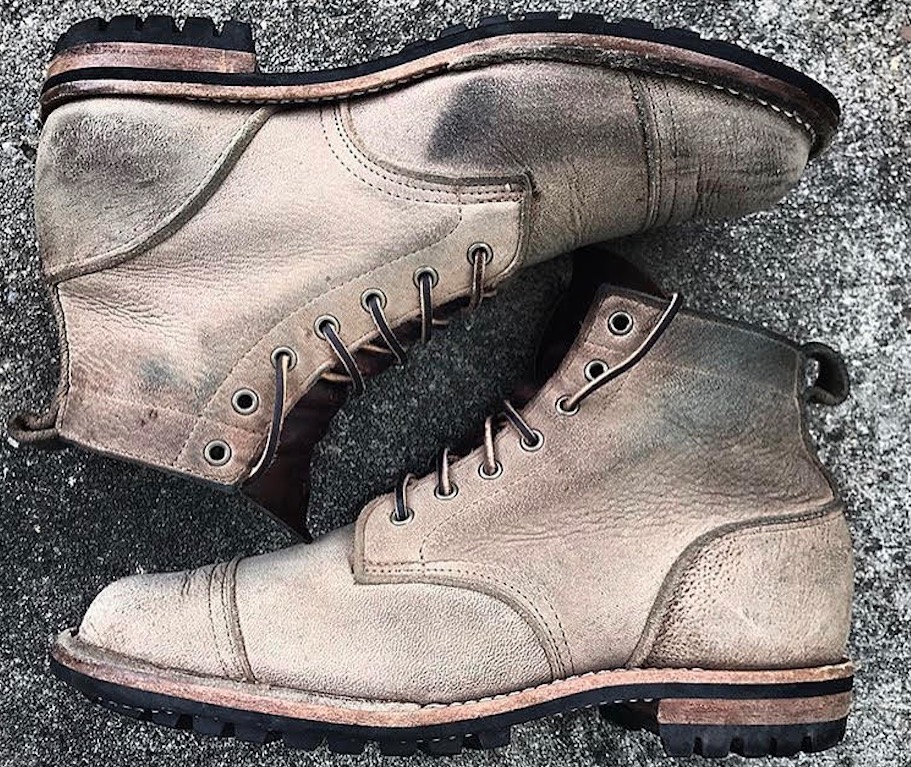 What changed my mind on boots was actually a direct link to my childhood. Like many kids, I idolized Indiana Jones, and when I learned of the Indy boot, I was intrigued. I scoffed at the price but I did the research, contemplated long and hard, and finally decided to bite the bullet and buy a pair of Alden 403 Indy boots.

When that green box arrived, it was a moment I’ll never forget. Seeing and smelling the Horween Chromexcel leather for the first time was an overwhelming experience. I was enamored by the workmanship, the quality of the leather, the neo cork sole, the sleek silhouette of the unstructured toe, the moc toe stitching, I couldn’t believe something so beautiful could exist. Then the best part dawned on me: I get to actually WEAR these.

When I finally discovered boots it all clicked. I couldn’t believe I had overlooked probably the best aspect of men’s style all this time. Nice boots are expensive, but not Swiss-watch level expensive. A really good pair of boots are about the same cost as a car payment, and the satisfaction you get from them far outweighs the satisfaction you get from a nice suit (just my opinion) because you can wear boots every day, even on the weekend! It wasn’t long before I was scouring StyleForum, reading everything I could about the vast blogging literature that’s out there, subscribing to the r/goodyearwelt subreddit, subscribing to the email lists of the best Alden and Viberg vendors so that I could stay up to date on what’s coming down the line.

Once Instagram happened, my boot collecting as a hobby really took off. Suddenly I was able to transcend my bubble and find other like-minded people. I was able to get inspiration from other guys who had a fascination with boots like I did, and who were posting boot pics everyday like I was! (Weird? I think not!) This is the part that gets lost in translation. It sounds cliché but it’s true: It’s not about the destination, it’s about the journey.

[Related: 5 Things to Look For When Buying a Pair of Boots]

What collecting boots has brought me is a new community. The exchange we have on a daily basis is fascinating, engaging, and I’m always learning. I feel like each week I’m seeing a new leather that I never even knew existed. One that stands out most prominently in my mind are the “China-Blue Waxy Commanders” from Truman Boot Co.

Think of a bright powder blue micro suede. They’re simply incredible to look at and analyze. They’re not an everyday boot, they’re not a starter boot, they’re an aficionado’s boot. A boot for the guy who has the basics and is ready to graduate into the exotic areas of boot collecting. These are the most fun areas by the way!

After boot collecting and blogging for a couple of years, a friend convinced me to start doing some consumer review videos. I started by filming a video comparing the Alden 403 Indy to the Alden 405 Indy boot. Apparently, this is a subject of fierce and heated debate on some forums! I decided to throw in my two cents on the matter. I made a video in my bedroom using my iPhone and mostly just improvising.

I posted it and forgot about it for about a year. When I checked back, I saw that it had a little over 30,000 views and tons of comments. I was astounded. I couldn’t believe such a crappy video made such an impact. I started making more videos, but none of them have come close to the popularity of that first one!

In the process of making these videos I discovered something: it’s fun, I mean it’s really, surprisingly fun to create and edit them! Making videos about boots became a new hobby! What I’m trying to say is, having nice boots to wear is great, but in my personal experience, sharing them and keeping a rolling dialogue on them is what keeps them interesting and what makes collecting boots so much fun. Buying boots isn’t free, but sharing them and talking about them on social media is, and as a hobbyist there’s where I find most fulfillment in all this.

I emphasized the adventure of boots collecting is what’s important, not the looks, but now I’ll contradict that:

Much scientific evidence has emerged over recent years demonstrating that looking at beautiful things like nature and art have therapeutic effects on the mind. I am willing to extend that concept to boots. 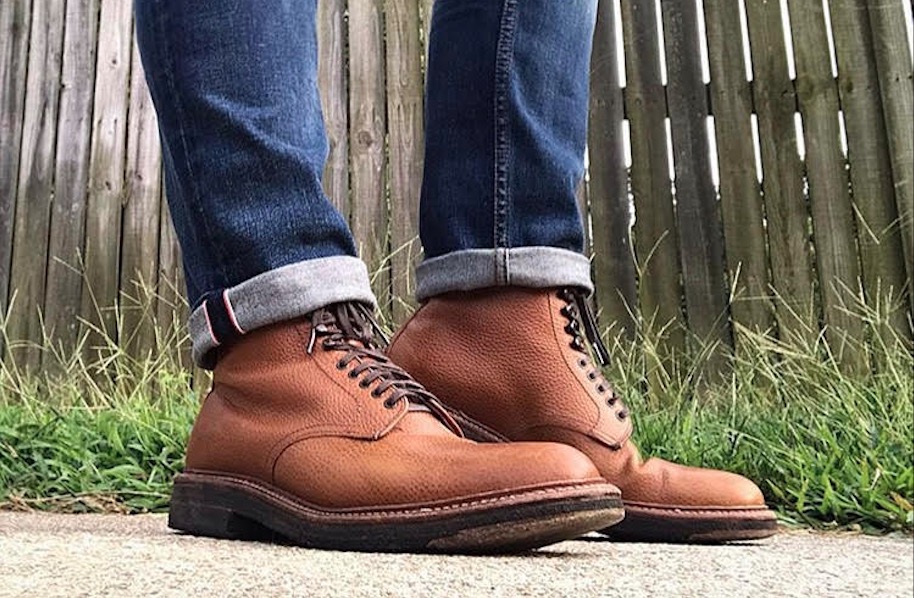 When I look down and gaze upon those sturdy, Goodyear welted masterpieces, I can’t help but feel a subtle escape from reality. Whether it be the smooth Horween Chromexcel, the rugged, hairy, oily reverse tobacco chamois, the smooth perfection of Shell Cordovan, or the incredible depth and texture of moose hide, each one is unique and special in its own way and invokes different feelings. Some people keep serene landscapes of beaches and waterfalls as their computer desktop pictures. I achieve a similar escape sensation when I look down at my boots. If gazing at art can bring you calm and serenity, then why not a well-crafted pair of boots?

Since boots have enriched my life in so many ways, an argument can be made that having nice boots isn’t materialistic at all, but rather it signifies ambition to seize life for all it’s worth, a yearning to engage and interact with the world, and to look and feel like a badass while doing it. That about sums up my outlook on why I absolutely love this stuff!