A lot of what are considered to be “wardrobe staples” today are items popularized by yesterday’s rule breakers.

Hollywood rebels like James Dean and Marlon Brando portrayed an exaggerated life on the fast lane. They became every girl’s daydream and every parent’s nightmare. The adventurous, carefree lifestyle that they both lived on- and off-screen greatly contrasted with the expectations of young men during the post-war era. Unlike their peers, these “bad boys” traded their pressed suits for the more rugged leather jackets.

In the 50s, donning a leather jacket meant you were a “tough guy”. The de facto jacket for these menaces was the Perfecto. A Perfecto is an asymmetrical leather jacket that consist of zip-up closures, snap lapels, and epaulets. If this style sounds familiar, then that is because every other biker jacket on the market is loosely inspired by this iconic design. 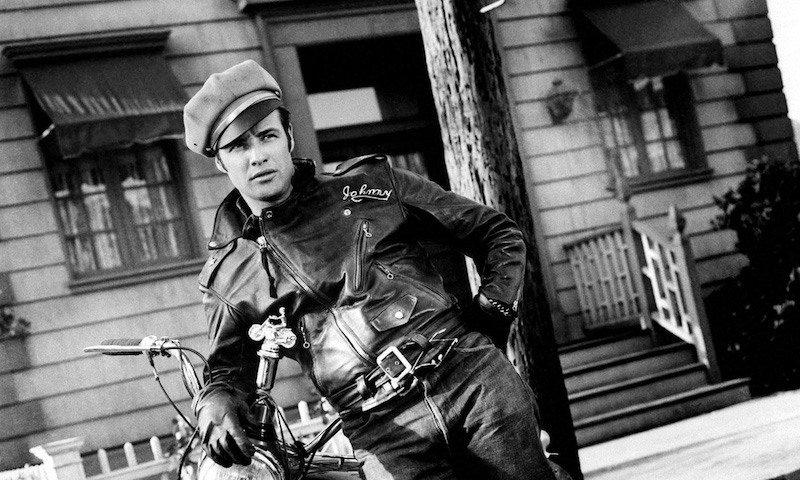 In recent years, the Perfecto’s appeal has expanded beyond motorcycle circles and gained prestige as one of the most stylish jackets a man can sport. This is especially true if you own one from the original maker, Schott N.Y.C.

For those who are not familiar with this brand, Schott N.Y.C. was founded by first-generation Russian-American brothers, Irving and Jack Schott in 1913. The company, which is still family-owned and operated today started as a small motorcycle outfitter but soon found success as a US military supplier and for its high-quality leather jackets.

For one, they have always regarded using quality leather as a top priority. While certain manufacturers will use “genuine leather” (a lower-grade leather) to cut costs, Schott N.Y.C. uses full-grain leather whenever possible, leather that has not been sanded down or snuffed in the tanning process. Sitting right below the fur of the animal, full-grain leather is considered the strongest part of the hide. Over the years, Schott has collaborated with renowned tanneries from all over the United States, including Chicago’s Horween Leather Company. Horween is very well known for producing some of the best chrome tanned leather on the market.

Another thing about Schott N.Y.C. that we shouldn’t overlook is is that throughout their over a century-long operation, they have managed to keep a majority of the production in the USA. This is an amazing feat considering the amount of MiUSA brands that have fallen to outsourcing over the years.

In keeping most of the manufacturing in their New Jersey factory, the owners and managers can personally inspect the grain, cut, and color of each hide just as Irving did many decades ago.

[See our review of the Schott Café Racer jacket here]

The 618 Perfecto is the quintessential leather jacket. Lovingly nicknamed the 618 Perfect-OG (by myself), it is the style that countless brands have tried to emulate, but they’ve ultimately failed to rival its rugged elegance.

This jacket is available in American steer hide. Schott’s steer hide is tough bovine leather that’s treated with resin and oils during the tanning process. The additives leave the leather with a subtle shine without a cheap, plastic look. Aside from that, steer hide is also sought after for its consistent texture and thickness. Though tough at first, it softens up over time and will mold to your body. This is perfect for a form-fitting jacket like the 618.

In case you are still not convinced that Schott N.Y.C. is still a hip brand, over the last few years they have consistently released sold out pieces with streetwear powerhouse Supreme.

The first piece that comes to mind when I think of their past collabs is the A-2 Suede Jacket in teal from Spring/Summer 2018. The A-2 is a classic American flight jacket that is associated with WW2 dogfighters. It went through several iterations over the years, but it typically follows the same design elements: snap collars, front-facing pockets, knit cuffs/waistbands, and a lack of hand-warmer pockets. It is important to note that though useful, during this time, hand warmers were not considered military standards.

When Schott jumped on the collaboration, the first thing they did was swapped the brown and black leathers for suede. They released playful options like leopard print, teal, or just black. Next, they brought back hand-warmer pockets that many of us in the civilian world find necessary in order to look cool and to stay warm.

In doing these things, Schott. N.Y.C reminds the public that they aren’t just a repro. brand stuck in the “glory days”. They are a true heritage brand without fear of treading into new waters like collaborating with Supreme.

There is no denying that Schott N.Y.C. is an American brand unlike any other. They have bested the test of time and transformed itself from a small business to an internationally recognizable brand.

If only the Schott brothers knew what will one be of their company one day when they started it in 1913. Thinking about it more, it is kind of ironic that, initially, Irving and Jack did not actually want to put their last name on their products. They thought that a foreign name like Schott would not appeal to American consumers. Many decades later, today, there is nothing more American than a Schott branded leather jacket.