When we talk about tanning leather, we don’t mean leaving it out on the beach to get browned in the sun. Tanning is the process of turning an animal hide or skin into durable, usable leather. Once the animal skin has been stripped of its fur and degreased, the water needs to be processed out of it, or it will start to rot. Draw the water out too fast, though, and you wind up with a dry, brittle skin that’s basically useless for making stuff.

Enter tanning: the ancient process stops the decomposition of organic material — in other words, it stops skin from rotting. (And when we say it’s an ancient process, we’re talking “centuries old” ancient. There’s evidence that neolithic civilizations in Pakistan were tanning leather over 5000 years ago!). How a skin is tanned determines the quality, durability, and look of the material that makes up all the best boots.

In the world of boots you’re usually looking at one of three methods of tanning leather:

Which is the best bet for your boots? Let’s take a look.

What Is Vegetable Tanned Leather?

Vegetable tanning, also known as veg-tanning, uses vegetable matter like roots, leaves, twigs and bark which are high in a compound called tannin (not coincidentally where the process gets its name). Tannins dehydrate the skins by replacing the water molecules and bonding with the collagen. Hides are stretched out on wooden frames and soaked in vats of increasingly concentrated tannin compounds, eventually resulting in a tough, durable leather.

Here’s the downside: vegetable tanned leather takes time to produce, usually somewhere between 30 and 60 days. Some tanneries take up to a year, like the horsehide-focused Shinki Hikaku tannery in Japan. In addition to the time commitment, vegetable tanning requires the careful attention of a skilled craftsman. Both these factors mean that this kind of leather comes with a heftier price tag.

that higher price is worth it — veg-tanned leather can last for years, even decades of heavy wear.

The good news is that higher price is worth it — veg-tanned leather can last for years, even decades of heavy wear. And while this kind of leather is stiffer than chrome tanned leather, meaning it’s less popular among the general public for shoes, it ages beautifully, acquires a unique patina, and over time it molds to the foot, and softens up without cracking. 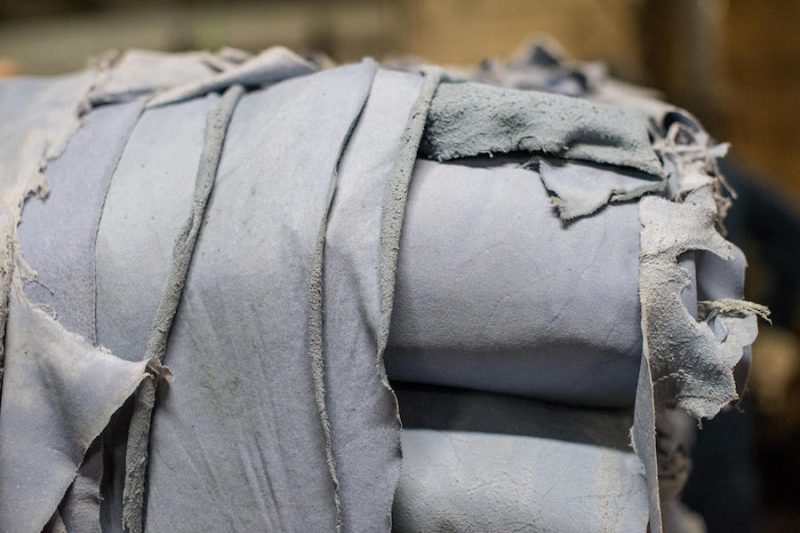 What Is Chrome Tanned Leather?

Chrome-tanning is veg-tanning’s younger, faster cousin, replacing all the organic tannins with a man-made compound called chromium(III) sulfites. It was first invented in the mid-19th century, and now at least 90% of all the world’s leather is chrome tanned.

Why? Speed, of course. The process takes only a day or so, and results in a greyish-blueish, semifinished leather which is stretchier than its organically processed counterpart, in addition to being much easier to produce. The leather is then waxed, oiled, shaved, lubricated, or dyed to produce the finished product. Chrome-tanned leather is easy to dye, and holds color well over the lifetime of the piece.

Chrome-tanned leather is easy to dye, and holds color well over the lifetime of the piece.

So overall, it’s a quick, cheap, easily automated process that results in a thin, colorfast and supple leather — so what’s the downside? Well, for one, chrome-tanned leather can have a shorter lifespan. The chrome process is quick because the chemicals involved literally dissolve out parts of the hide, which can make the final product thinner. It also means cracking and wearing out can happen more quickly than veg tanned leather.

There’s also chrome tanning’s environmental impact to consider. What do you do with the (distinctively, disturbingly blue) vats of chromium water when you’re done with them? Many tanneries just dump them into local water sources, leading to contamination of drinking water and a whole host of health problems for the people who live nearby.

Take, for example, Kanpur, India. It’s considered by many to be the leather capital of the world — it’s home to over 250 tanneries —  and respiratory problems, renal failures, dermal issues, and birth defects have been closely linked to pollution from the tanneries.

To be clear, not every tanner that uses chromium is an extreme polluter. Chicago’s Horween, for example, is subject to much more stringent regulations than Kanpur.

We’re certainly not saying that all chrome tanned leather is bad quality or irresponsibly produced. Many of the world’s greatest leathers are chrome tanned.

And we’re certainly not saying that all chrome tanned leather is bad quality or irresponsibly produced. Many of the world’s greatest leathers are chrome tanned. Because (as a rule) it’s cheaper and more comfortable than veg-tanned stuff, it’s vastly more popular than veg tanned, so there’s huge demand for leather artisans to make the best chrome tanned leather they can.

Oil tanned leather is one significant example of innovation in chrome tannage.

What Is Oil Tanned Leather?

Red Wing might be America’s most beloved heritage boot brand and they make all their own leather at their own tannery, S.B. Foot. It’s described as “oil tanned,” which means the leather is chrome tanned but it’s infused with a significant amount of oil, making for particularly weather resistant leather that needs little conditioning. Thursday Boot Company has also released their own oil tanned line, called “Rugged & Resilient,” and plenty of other companies trade in the stuff, like Dayton, Danner, and Thorogood. 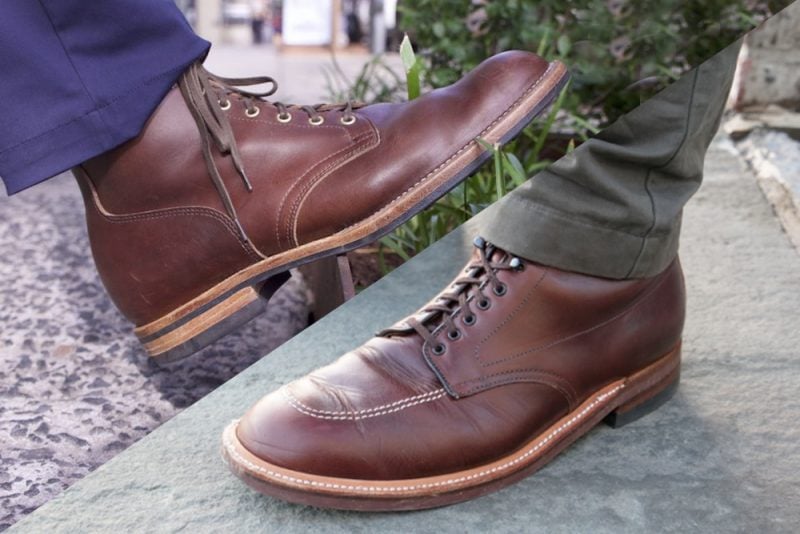 Viberg and Alden, boots often compared because they both use high quality Chromexcel.

If you’re wondering, “Isn’t there a way to get the best of veg and chrome?” then you might want to think about combination tanned leather, which uses elements of both processes. Far and away the most popular veg-chrome hybrid is Chromexcel®, a leather devised by Chicago’s Horween Leather Company that’s used in boots as inexpensive as Thursday Boots ($199) and as pricy as Viberg’s Service Boot ($700). It accounts for the majority of the leather Horween produces, and is renowned for the depth of color produced by the variety of oils and waxes “hot stuffed” into the leather.

But there are plenty of different ways to go about combination tanning. CF Stead’s kudu and the leather on Oliver Cabell’s SB1 is mostly veg tanned and only finished with a couple of hours with chrome tanning agents to help lock in the waxes and color; Rhodes, meanwhile, uses calfskin that’s first chrome tanned and then further semi-veg tanned; Chromexcel itself undergoes a chrome salt “bath” before vegetable “retannage.”

So it’s hard to paint all veg-chrome tanned leather with the same brush. While it’s tempting to say you’re getting the best of both worlds with combination tanning it’s worth remembering that Horween doesn’t rank too highly on independent measures of environmental friendliness — chrome tanning can still be tricky in any amount.

So what’s best for your boots? Well, according to Jason Pecarich, owner of luxury heritage menswear boutique Division Road, that depends what you’re looking for.

“Chrome tannages yield flexible, supple and durable leathers which give out of the box comfort while remaining hearty for decades. Vegetable tanned leathers are more natural and full feeling and leave the grain more pronounced, patina more dramatically, and are easy to coax into shapes using heat and moisture, meaning they mold a little more to the foot. Neither is better than the other, they are just different and have different qualities in wearing and how they develop.”

So whichever leather you decide to go with is ultimately up to you.