Depending on your background, Chelsea boots might be stylish urban boots, rugged riding boots, or footwear for manual labor.

Variants of the Chelsea boot have gone from the feet of royalty — they were originally designed as Queen Victoria’s walking boots —  to the feet of Australian stockmen to the Beatles themselves, who popularized the style and helped them to become known as “Beatle boots” in the 1960s.  There are Chelsea boots for just about everyone.

But are there Chelsea boots on the market that are good for work? Rest assured, there’s a pair available for your style and needs.

What is a Chelsea Boot?

The Chelsea boot was originally designed as a walking boot in Victorian England. They were a popular style until World War I when they fell out of fashion until they were redesigned for the Beatles with a pointed toe and Cuban heel and became a fashionable urban boot. Here is where you can see the origins of the “dress Chelsea,” like Carmina’s.

While popularity in England waned, popularity in other countries like Australia continued to grow. It became the preferred work boot of Australian ranchers, who would wear Chelsea boots riding horses on large ranches, similar to cowboy boots in America. Tasmanian bootmaker Blundstone’s rugged Chelsea boots are extremely popular (no doubt due to their low price) and you’ll see people wearing them all over the planet, from New York City to Alice Springs. Another Australian brand, R.M. Williams, has become the go-to brand for higher end Chelsea boots in various styles.

All Chelsea boots share a few traits: six inches in height and elastic goring on the sides to make them laceless and easy to pull on and off.

Proper work boots for people who work on risky work sites must meet ASTM standards for protection. They include electric shock resistance and safety toes, among other safety features like puncture resistance soles and metatarsal protection.

Of course, many people want work boots for less risky endeavors like yard work that may not require the extra protection needed by ASTM standards. While you may work in these boots, you can get away with casual Chelsea boots that look better with jeans and can be worn out without looking too much like something you’d find on a construction site.

Here are a few of our top picks for Chelsea work boots. 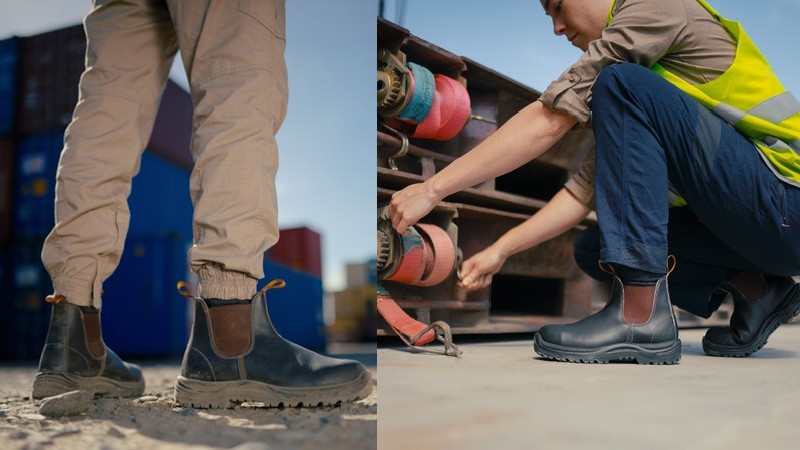 Blundstone Stout Brown Leather Chelsea Work Boots Check Best Price
We earn a commission if you make a purchase, at no additional cost to you.

Ariat makes a ton of different work boots for men with their Turbo and Ground Breaker models. They are all ASTM certified, but you’ll need to check which certs match your requirements. For example, the Ariat Groundbreaker Chelsea Wide Square Toe Waterproof Work Boot is a soft toe and only meets electrical hazard safety requirements. The Groundbreaker Chelsea Wide Square Toe Waterproof Steel Toe Work Boot has a steel toe and is ASTM F2413-18 M I/C EH rated for metatarsal, impact/compression, and electrical hazards.

Ariat is a well-known and well-respected brand. They make wide sizes for many of their boots, they come in multiple colors and leathers, and most of them also have a waterproof membrane.

Ariat Chelsea Work Boots Check Best Price
We earn a commission if you make a purchase, at no additional cost to you.

The composite toe Romeo is ASTM F2413-18 M I/75 C/75 EH rated composite toe. It also comes in a soft toe, which does not meet those standards.

Wide-footed guys will like to appreciate the EW (extra wide) option and despite their flagship fashion boots costing well over $350, the work chelseas are good value at $145. Wolverine I-90 EPX Romeo CarbonMAX Boot Check Best Price
We earn a commission if you make a purchase, at no additional cost to you.

First, I know it’s subjective, but I think their Amp LT Wedge Steel Toe is the best-looking Chelsea work boot. I’m biased because I like Goodyear Welted boots and the wedge sole, but their boots are packed with great features.

For one, it’s Goodyear welted which means it’s durable, resolable, and water resistant. All of the other boots on this list are cemented, meaning the rubber soles are glued to the uppers of the boot. You may have had a pair of boots or shoes where the sole fell off or separated from the rest of the shoe — Goodyear welted boots are repairable.

I like Georgia boots because they take this heritage-style Goodyear welted construction and combine it with modern materials like EVA foam, fiberglass shanks, and slip-resistant outsoles. Georgia Boot Waterproof Romeo Slip-On Shoes Check Best Price
We earn a commission if you make a purchase, at no additional cost to you.

Timberland began as a work boot company before becoming a symbol of urban fashion. With a background in workboots, it’s not surprising that they make Chelsea boots for work.

They have a composite toe and electric hazard protection but they don’t mention any certifications or standards like the ASTM, so you’ll want to confirm that these will work for your job before making any investments in the boots.

They make great around-the-house, shop, or garage boots, though. They have a lot of features like slip-resistant outsoles, a comfortable anti-fatigue insole, and are made from recycled materials.

They come in wide widths and brown and black leather. TIMBERLAND Nashoba Casual Composite Toe Work Shoe Check Best Price
We earn a commission if you make a purchase, at no additional cost to you.

Can you work in Chelsea boots?

You can work in Chelsea boots. Depending on your job or the type of work you're doing, you might want to Chelsea safety boots like Blundstone's work boots.

Can you wear Chelsea boots with jeans?

Can you wear Chelsea boots with a suit?

How to wear Chelsea Boots for Different Occasions?

Are Chelsea boots appropriate for work?

Chelsea shoes may be appropriate for a job depending upon outfits used. With a suit, pick a svelte Chelsea like Carmina or RM Williams. For manual work, pick an ASTM certified boot like Blundstone's work series.

Can you wear Chelsea boots casually?

Can you wear Chelsea boots all year?

You can wear Chelsea boots all year round. If you live in an area with harsh winters you want to find a pair of chelsea boots that are highly water resistant or waterproof like Ariat or Blundstone.

Is it OK to wear boots to work?

This depends on your dress code at work, but given there are a wide variety of chelsea boots you should be able to find a pair of chelsea boots that are suitable for your office. If you want a casual look, check out Red Wing's Classic Chelsea. Pick Carmina for a formal look, and pick Blundstone or Ariat for a more physical job.