Your jeans have a hole, you want to get them fixed because they’re still great jeans — you spent all that time getting that distressed look and hey, repairing garments is better for the environment — but do you know the best way to fix holes in your jeans?

To answer that question I went to denim repair shop Soldier Blue with David Claxton, the Creative Manager of heritage menswear store Son of a Stag, which is Soldier Blue’s sister company. Soldier Blue specializes in denim, particularly more old-fashioned selvedge denim as well — but the stuff we’re going to discuss can apply to fixing any pair of jeans.

Darning is a method to mend fabrics. It has some advantages for guys who want something that isn’t as noticeable as a patch: it’s more durable and feels better against the skin plus you don’t look like as much like Aladdin. But what exactly is darning?

Darning is a way of mending a hole in any knitted material by interweaving new yarn. The process takes what’s called a darning stitch and weaves it in rows along the grain of the fabric, back and forth to and from the end of each row. One anchors the thread on the edge of the hole in the fabric and carries it across the gap. It’s often done by hand, but thankfully, we have machines that can be extremely effective at completing the task.

“It’s the way that the foot works on the sewing machine, so it’s not dragging the material around — basically, your hand is what controls the motion,” says David. “Essentially, what you’re doing is coloring in the area with thread. It’s more like an artistic way of doing it, you can put a lot more personality into every repair that you do, which I think is important.”

For the best possible job, you want a dedicated darning machine instead of a sewing machine with a darning attachment. 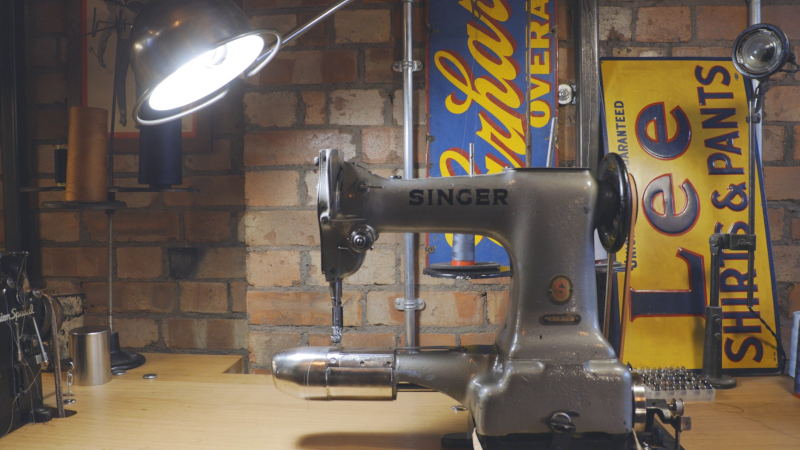 The most common ways to repair jeans are darning and patching.

Patching is an effective way to repair denim, but there are two downsides: it’s not the most aesthetic route for most styles, and it’s not that comfortable.

“A lot of people will go and just sew a piece of denim underneath where there’s a hole, but that’s not going to feel great,” notes David.

The Best Machine for Darning

Darning is a different beast. It’s a very skilled process that requires specialized equipment and training.

“The thing that we specialize in here is the machinery, so the boss has gone all over the world and collected these machines which each do a singular job,” says David. “The machine of choice is the Singer 47w70, which is this one right here. It’s a darning machine and basically, for our money, this is the best way to repair jeans authentically and the most durable way to do it.”

So if I go to my local tailor, who doesn’t have all these machines, what are they likely to do if I ask them to fix a hole in my jeans?

“What they’re likely to do is use more of a modern version sewing machine, and just use the reverse option to go backwards and forwards over it,” says David. “But it doesn’t allow for that dexterity in a repair. Yes, it might cover the hole but with a machine like ours, we can match the threads perfectly and really control the stitch length. It’s all to do with the greater hand control.”

If you can match the threads, it’ll be less glaring of a fix, aesthetically speaking. Also, it’ll be more durable and comfortable as well. 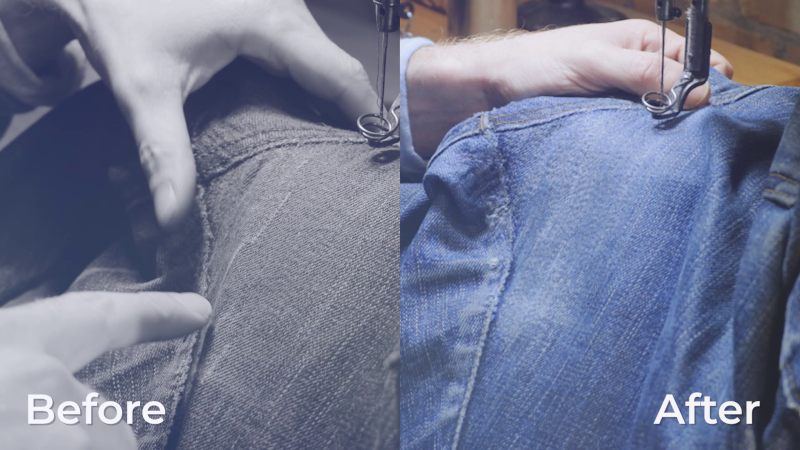 Darning isn’t just a paint-by-numbers process. It takes specialized equipment, as I mentioned, but it also takes a lot of skill, especially if you want nearly invisible repairs.

When done correctly, you can’t even tell there was a hole.

When darning is done with a normal sewing machine with a darning attachment, as would be the case with a normal tailor, the appearance of the fixed hole looks a little like a checkerboard.

That’s totally fine — you don’t have to be a perfectionist with jeans. Beating them up is the point. But with Singer 47w70, you can’t tell there was a hole there — the person working the machine simply has much more control over the outcome.

“That’s exactly what we want to go for: as invisible as possible.” 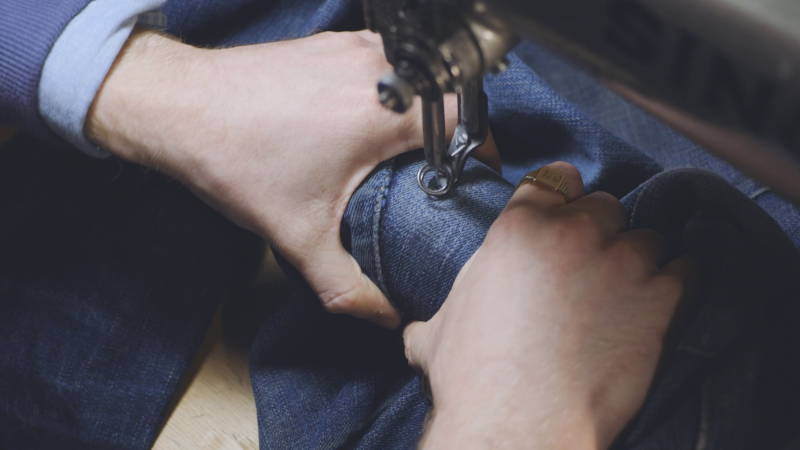 “We’ve used a slightly lighter color to bring out the grays of the jean as that’s faded,” David notes. “That’s another thing that we’re trying to be very careful of: to make sure the colors match perfectly but also to think about how they’re going to look in six months to a year’s time. So we wouldn’t want to use anything too dark on this pair because they’re going to get lighter.”

David has been doing this for seven years now.

“It’s a learnable skill, definitely,” he says. “I always say, because I’ve trained people up in here before, that part of it is to have a passion for the denim and an understanding of of the way that denim works, and the way that it fades, and the way it moves, and the way that it wears out. You could have any one color in a hole, a circle on a piece of paper, but just using the right colors and with the right sort of pressure and and that kind of thing is critical.” 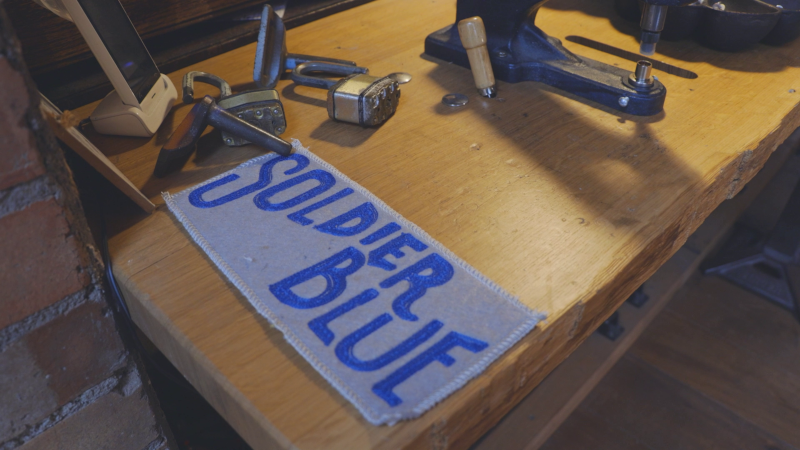 There it is: the best way to fix your jeans is by darning. The best way to do it is the dedicated darning machine and the best darning machine is the singer 47w70 if you happen to get your hands on it. If you’re passing through London or happy to mail them your pair (as many do), Soldier Blue is the place to get your jeans repaired as best as they can.

Hopefully that proved a useful tutorial on the high-level concept of darning.