Recently, I headed to Filson‘s downtown Manhattan showroom — invite only, I’m afraid — to check out some special items they put for their 125th anniversary. They’ve got a lot of really interesting anniversary-themed, one-off, super limited release goods that we’re going to take a look at.

If you don’t know about Filson, this stalwart outdoor brand was founded all the way back in 1897 to outfit miners and outdoorsmen heading to the Klondike Gold Rush, and for 125 years they’ve created a reputation for making durable outdoor gear that still manages to look stylish if you’re wearing it in the city. They’ve got a range of apparel, bags, and footwear, but their best products are their outwear and their bags, which I’ve reviewed many times on this site.

To get the inside scoop about these limited items, I met up with Greg Grammen, Filson’s Account Executive for wholesale for the Eastern Seaboard and Canada. For this article and video, we looked at their new outerwear pieces because, among Filson’s many other terrific products that come out, the jackets are at the top-end for heritage outerwear.

Filson’s flagship coat is without a doubt their Mackinaw Cruiser. I have the classic red and black “buffalo plaid” version which is, in my mind and many others’, the most iconic wool jacket of all time.

This year, there are four (4) new versions coming out to celebrate the 125th anniversary.

[Review: Why Filson’s Mackinaw Cruiser Is the Best Wool Coat of All Time] 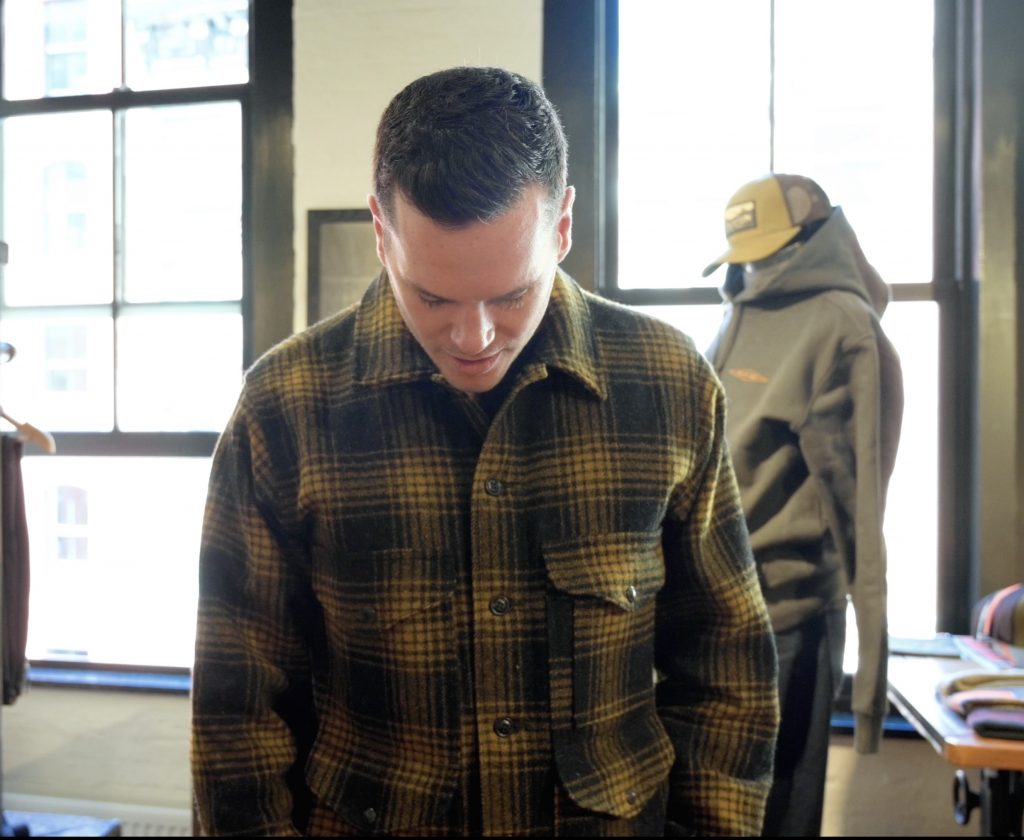 Every year Filson puts out a limited color and this year’s is called Ochre/Ombre.

“It’s a gold ochre ombre and it’s our 26 ounce Mackinaw wool, made in Seattle,” says Greg. “It has nine pockets. (This colorway) is one of my personal favorites. I’ve seen many that we’ve done over the years and the color is just great, and it’s a little different plaid than the traditional just square with the smaller lines through it.” 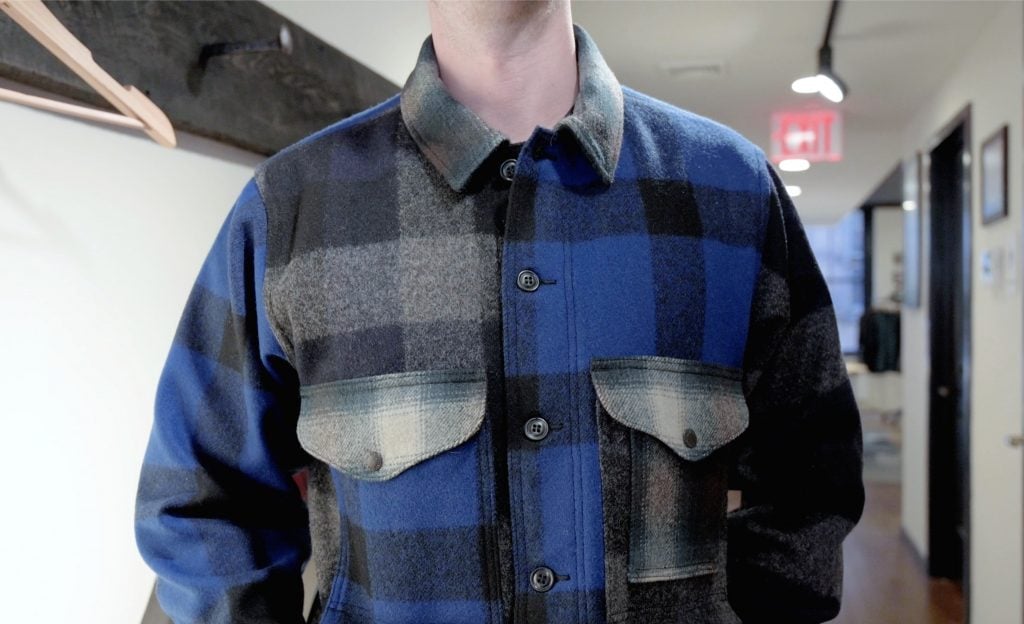 There’s a new Mackinaw every year, so for the 125th anniversary, Filson wanted to do something more special and increase their one-off offerings. Greg and I actually had a little bit of a squabble about whether we’re allowed to show the other limited release jackets — they are very tip-top secret Filson Mackinaws and very limited runs will be made.

“One hundred of each color, and they will be dropping at different times. So that’s a very, very small run,” says Greg. “What we did was we went and found some of the old fabric colors that we have done before in the past, like this blue-black and charcoal one. We’ve done all these different Mackinaw Cruisers that we’ve done and pieced them together.”

There are three colorways: Charcoal and Blue, Red and Green, and a Charcoal mixture of solid and plaid varietals. 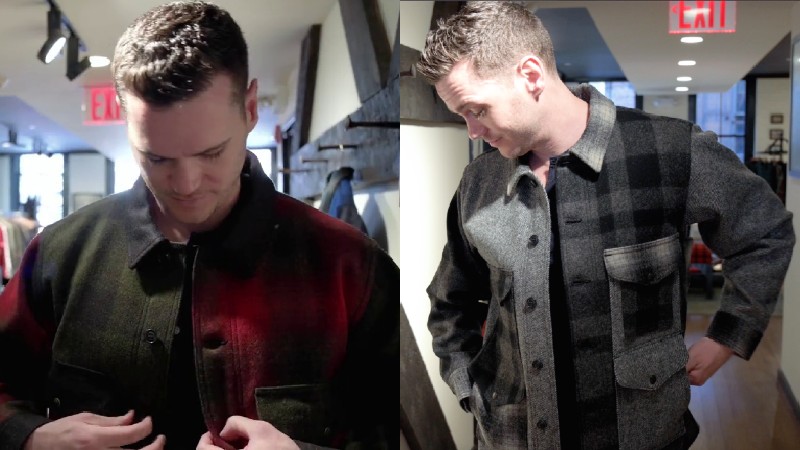 This patchwork’s a literal patchwork: they stitched together popular colors from past years into these very cool jackets. I’ve not seen anything like them before and while they might be more fashion forward than the standard black or navies that traditionalists are used to, I don’t think they’ll have trouble finding enough die hard Filson fans to fill the quota of one hundred pieces. (My favorite is the combination of the two charcoals.)

So how do you buy them?

“That’s a good question, I don’t have the details on how we’re going to do that yet,” says Greg. “So stay tuned on that, it will be the fall season but I don’t have the months. I think they’re going to come out each one at a time, one month we’ll drop this color, in the next one the next color. But details are coming later on.”

If you like your Mackinaws, keep an eye out for these ultra-limited edition ones that’ll probably appreciate in value with age. 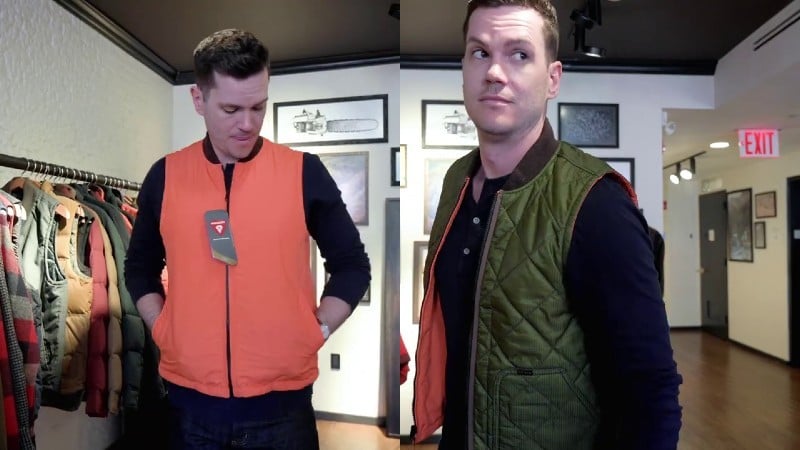 The next up is a more technical piece: reversible vests and jackets made of ripstop, a fabric often used in tents and bags because it’s woven with a reinforcing technique that makes it extremely resistant to tearing and ripping. If it happens to rip,  the crosshatched threads keep he rip from tearing the fabric right open. It’s very useful if you’re nowhere near a place where you can get a hole fixed: think climbing, hunting, and hiking.

The green-that-reverses-to-orange colorway would work well for hunting or anything that needs high visibility, but as I said, Filson does a solid job of making apparel that works as well in the woods as they would in the city, and the tops are as much at home in urban and rural environs.

“It is a liner, or you can just wear it as a vest,” says Greg, noting that many of Filson’s jackets, like the recently rereleased Aberdeen Work Jacket, can attach to liners like this. “It’s both ultralight in weight and insulated with 100 grams of Primaloft.”

Primaloft was invented by the US military for fighter jet pilots and other personnel who’d be in cold in wet environments, like the deck of an aircraft carrier. The material is like synthetic down, and some find it preferable to down because the ‘natural’ stuff loses its insulating abilities when it gets wet. Primaloft, on the other hand, can get wet and still keep you warm.

Next, we have the Snohomish jacket, named after a town outside of Seattle. Another reversible offering, it’s made with a 15-ounce wool, which is considered midweight — lighter than the 24oz Mackinaw. Wool is naturally water-resistant and has the ability to keep you warm even when it’s wet. It’s been used as insulation that protects against wet, cold, and wind for thousands of years.

If you’ve always wanted to have a buffalo plaid hoodie that looks a little bit like the Mackinaw cruiser, this is the jacket for you.

The inside is a nylon/cotton blend: orange on the buffalo plaid and tan on the green colorway. 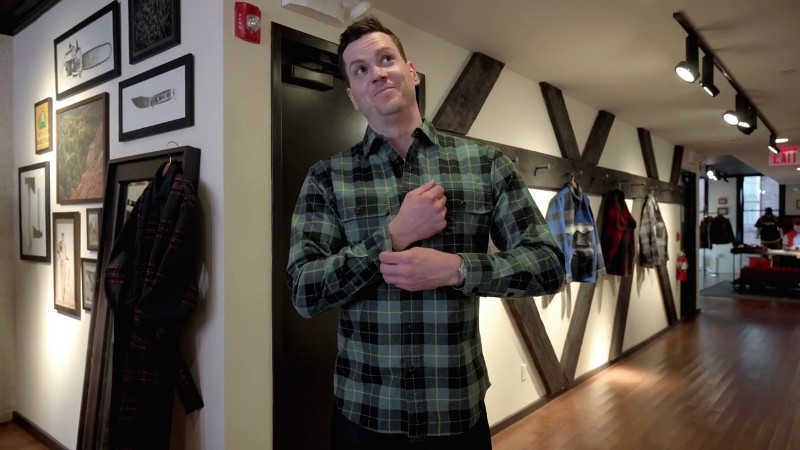 Many new colorways are being introduced this year that you can find in the video beginning this article: blue-black plaid, green and yellow plaid, a solid light brown and dark blue, and a houndstooth.

“This 7.2-ounce cotton is a really tightly woven cotton and then we brush it on on both sides to give it this really nice hand,” says Greg. “It feels almost like a chamois.”

These colorways are one-and-done in 2022. 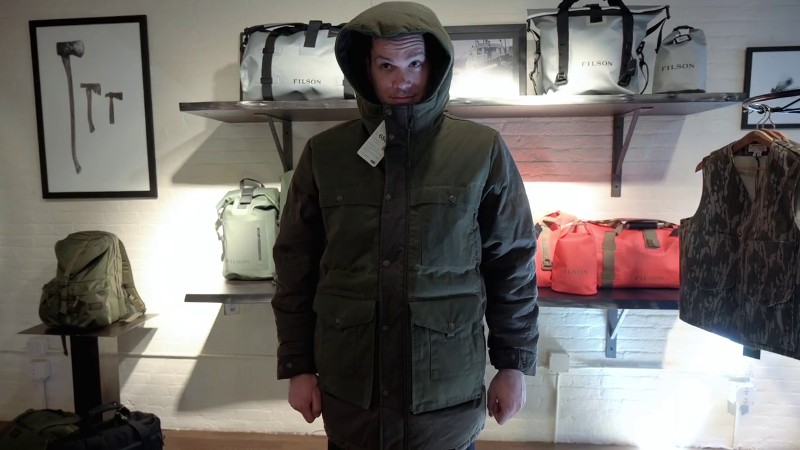 “We have never done a tin cloth jacket with a hood built in,” says Greg. “This is a 14.75-ounce oil-finished tin cloth and it is PrimaLoft insulated. It’s an amazing jacket, just heavy-duty and open back, so it’s very easy to maneuver.

Tin Cloth is Filson’s signature material. It’s an oiled and waxed canvas that’s very water and abrasion-resistant. They age really well and develop a lot of character over the years.

“This is a jacket that we currently make, but we put the hood on it,” says Greg. “So this is an oil finished tin cloth, down jacket, it’s 650 traceable goose down. It’s a great seller, we make it in a vest as well and we introduced it with this hood attached.”

It’s a goose-down insulation, so if your thing is natural materials, this might be you might prefer this over the Primaloft insulation. In either case, they’re both gonna keep you super warm.

That is it, Filson’s exciting new outerwear for the 2022 season’s 125th anniversary. There are a couple of other things that are coming out as well that I’m excited for, like a new dry bag and a couple of vests I saw, but my favorite Filson products are their jackets — and this season doesn’t disappoint. Keep an eye out on their Instagram and mailing list to get the details on when all their anniversary offerings will be released.