Shark skin leather has a long association as a “fancy leather good.”(1) After an MTO boot company’s shark leather boot caught my eye, I decided to find out more about this exceptionally unusual animal skin that mat just be king of the ultra-masculine-leather category.

Cuit Ortiz, founder of John Doe Shoes helped me answer a few questions and guide me through the pros and cons of shark leather boots.

Where Does Shark Leather Come From?

Like most animal hides, shark hides are a by-product of the food industry. Fishers process shark meat for human consumption and sell the skin to exotic leather suppliers.(2)

Most exotic leather suppliers advertise shark leather from the blue shark (Prionace glauca). The Food and Agriculture Organization of the United Nations (FAO) says that blue shark meat is less desirable for human consumption, and fishers often consider blue sharks to be off-catch.

Is Shark Leather Made of Endangered Animals?

According to the FAO, there are about 25 shark species whose skin is desirable for producing leather. Of those only two, the Tiger Shark and Bull shark are near threatened. The others are vulnerable, endangered or critical.(3) They also mention that,

the demand for shark leather is not believed to threaten the existence of sharks.

Blue sharks are most commonly used for leather goods. The International Union for Conservation of Nature and Natural Resources (IUCNN) lists blue sharks as near threatened. They are not critically endangered, endangered, or vulnerable.

John Doe Footwear writes that their

shark leather comes from non-endangered or threatened shark species. These skins are a by-product from fishing villages.

How Is Shark Leather Regulated?

Exotic animal skins fall under protection by CITES, the Convention on International Trade in Endangered Species of Wild Fauna and Flora. CITES is an international agreement between governments to ensure that international trade in wild animals and plants does not threaten their survival.

Legitimate exotic leather suppliers, like Pan American Leathers, include the species of sharks used for their hides.  While the species may vary depending on season and availability, the exotic leather providers we looked at choose sharks that are non-threatened and non-endangered species.(2)(4)(5)

What Are the Benefits of Shark Leather Boots?

There are a few reasons that shark leather has attracted a passionate following.

Sharks have rough, hard scales called denticles.  Often these denticles are ground down to make the leather smoother and easier to handle, which also gives shark leather its pebbled appearance. Untanned skins are called shagreen, a general term which also includes the untanned leather from horses, seals, and even stingray hide.

Shark leather is tough and strong. It’s so tough that 18th- and early 19th-century woodworkers used shagreen for sandpaper.(6) Even after being shaved down, the scales help the leather avoid scuffs and scratches. This allows for a very durable, long lasting product.(7)

Sharks live in the water, so it’s not surprising that their hides are naturally water resistant. Though, like all hides aquatic or terrestrial, it’s the finish that determines how leather responds to water.

For example, Horween’s Chromexcel®  has been “hot stuffed” and is full of oils, so it’s more water resistant than many unfinished leathers, especially suede. (Even Chromexcel® will show discoloration if they are repeatedly soaked, though — if you want your nice boots to be as waterproof as possible, we wrote an entire piece that you can check out.)

Shark skin starts as a rough, sharp material — a sort of natural armor. This is the reason why shark scales are often ground down during the tanning process. They won’t cut your skin, but they’d be impractical for footwear. Ortiz has used several batches of shark skin and tells me, “I wouldn’t say our shark leather is stiff, but it certainly won’t come to my mind as a soft and supple leather.”

Shark hide is eye-catching. It’s visually distinct from most terrestrial animal hides. In place of pores, there are scales. Because most tanneries grind down the rough scales, shark hide has a unique and lovely deep pebble texture.(7) Ortiz has worked with several runs of leather and sums it up in three words: thick, rugged, wrinkled. 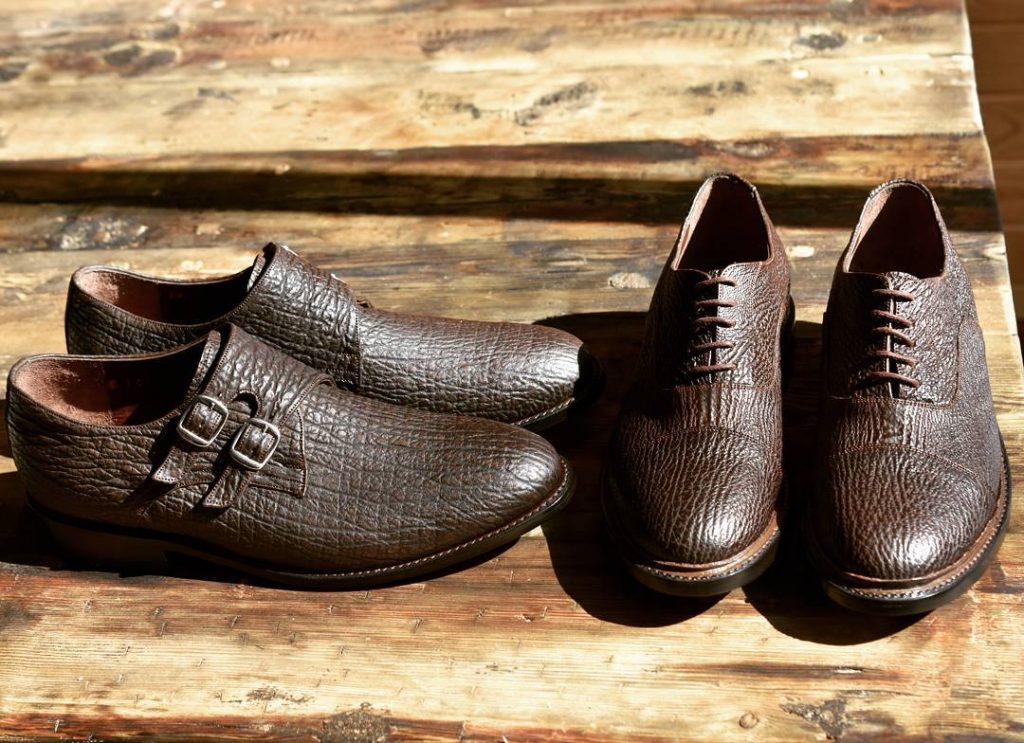 What Are the Downsides of Sharkskin?

Before you go leaping to the “buy” button…

This is not an ad, but of all the sharkskin boots we’ve seen, John Doe’s does have the best value at $230 per pair.

There are two factors that limit the supply and availability of shark leather. First, there are quotas on how many blue sharks can be caught per season.(2) Second, most shark skins range from 3-6 square feet. This is a relatively small hide to work with.

The small hide is even more of a problem because sharks are wild animals. They fight and get snagged by fishing hooks, often leaving unworkable gashes in their skin; moreover, Blue sharks are prey and predators. High grade skins need to be immaculate, and for this reason finding a hide that works for boots may be a challenge. (And makes the high cost seem more understandable.)

Personally, I like a bit of variability in my leathers, but it can be hard to predict exactly what a pair of shark boots will look like. Still, it’s nice to know what you’re buying.

“The first batch of Shark we got was kind of soft and supple, it was like shark suede,” Ortiz notes. They don’t all come like that.

Also, the natural creasing of the skin will vary, like fingerprints for humans — each shark hide has a unique pattern. So it’s imperative to cut and align the leather properly.

So Should I Buy Some Shark Skin Boots?

If wearing the stunning armor of an apex predator is at all tempting — and you have some money to throw down — I’d say go for it.  Shark skin hits all the right notes: it’s durable, eye-catching, and unique.

For the sake of showing both sides, some might find it a bit too flashy for everyday wear, lacks some consistency in appearance, and can be cost prohibitive. But if you don’t mind paying for long lasting leather that tells a story, this might be worth diving into.

(We had to work one shark pun into this article.)

Images courtesy of John Doe Shoes, who did not sponsor this article, they’re just the only guys we talk to who use shark leather.

1 thought on “The Pros and Cons of Shark Leather Boots”