So you’ve decided to pull the trigger on a pair of Vibergs.

If it’s your first foray into what Viberg has to offer, chances are good you’re eyeing up some Service Boots. You might even be looking at a specific makeup from a stockist that ticks all the aesthetic boxes for you. While your trigger finger develops that signature pre-buy itch, you might actually be overlooking one of the most important aspects of selecting the right Vibergs for you: the last.

All Viberg lasts are named with a seemingly arbitrary numeral, and this article will hopefully guide you through that number soup of Viberg lasts.

First things first, a last is the foot-form that a cordwainer uses as the mold for building a particular shoe. It’s what makes the shoe fit like a foot.

Most lasts out there are derivatives of derivatives, being honed from agricultural, military, or woodsman roots. The difference across makers typically boils down to which alterations have been made for aesthetic and/or comfort purposes. Viberg’s lasts have been developed in much the same way, and while some of their lasts may look similar to each other at first blush, there are unique properties to each that may matter to any prospective buyer.

Viberg currently offers at least six lasts for their Service Boots. While each last was developed with a specific width in mind, multiple widths are now available on many current (and most upcoming) Viberg articles.

Viberg explains that nearly all stitched shoes out there which are tagged a “D” are closer to a B/C in the heel, and an E in the forefoot. Accordingly, nearly all Viberg Service Boot lasts will tend towards being narrower in the heel and wider in the forefoot. With all of that out of the way, here is a quick and dirty rundown of Viberg Service Boot lasts.

[Related: Are Vibergs Worth It? An In Depth Exploration of the Brand]

The original “original”. This is as traditional a last as Viberg offers, and is known to break necks with its wild toe spring and prominent puff. Somewhat rare in the wild, but always respected when sighted.

The one that started a revolution. This last was developed to be a flatter, sleeker variant of the 310 and has a distinctive silhouette both in top-down and side profile views. From top-down, the waist tucks neatly around the instep, leading to the flare of the stitched upper over the midsole at the widest part of the forefoot, tapering fairly dramatically to a sleek almond.

The toe puff and spring of the 310 give way to a svelte profile with a low-profile toe and a heel cup that invites you in for a hug. Interestingly enough, the 2030 last itself has gone through several iterations over the years, with subtle changes here and there.

Currently, it is an E width standard, D and EE widths available.

The kinda-traditional. The 2040 is a bit more traditional of a shape than the 2030, and brings back a slight bump in the toe while also tightening things up a touch in the waist and heel. The forefoot feels a click roomier than on the 2030, has less of a taper after the forefoot, and overall is a slightly more anatomically correct last. This is a personal favorite of mine. The 2055 is essentially the same last but without the mild bump in the toe.

The middle child. Compared to the 2030, the 1035 shortens the toe slightly by rounding out the taper, and goes slightly wider in the forefoot than the 2040 while maintaining a similar heel to the 2030. 1035 in D is apparently “quite a nice last” according to Brett Viberg. 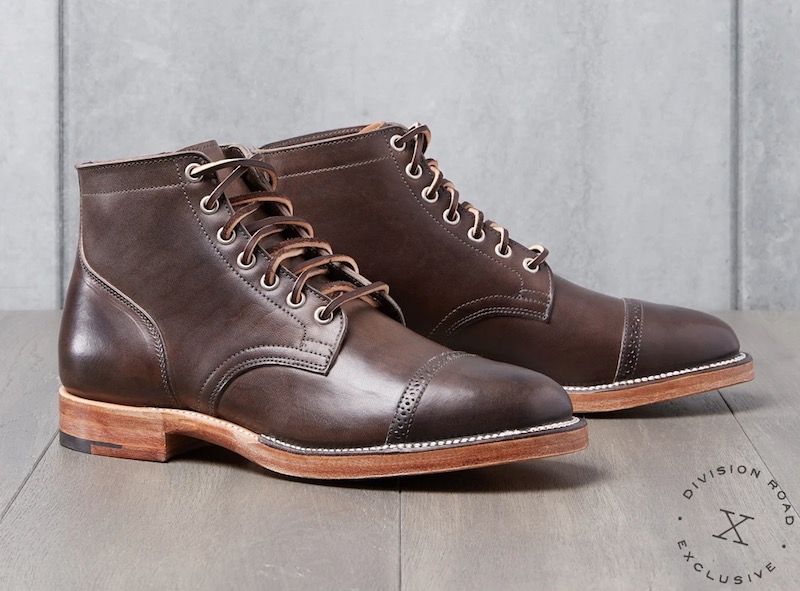 The cantilever lasts. These are the most anatomically correct lasts that Viberg has developed and are all mild variations of the same idea. Viberg wanted articles built on these lasts to hug the wearer’s foot everywhere. Therefore, these are the narrowest lasts Viberg will build a Service Boot on. The forefoot is still relatively generous, but deliberately trim everywhere else in order to properly place the foot within the footbed.

Additionally, Viberg offers these lasts in many other boot and shoe models, including the Boondocker, Scout, Derby, Wholecut, and Oxford. They also offer entirely distinct models that have their own designated lasts, with a hiker on the 240 last, a Chelsea on the 2050 last, a series of engineers and ropers on the 2005 last, a slipper and mule on the 2010 last, a sneaker on the 1003 last, and other fun goodies like a traditional deck shoe on cup soles. And then there’s the Viberg work boot line, which is a different world unto itself.

A final, but very important thing to keep in mind is that sizing can vary depending on the last. It is always strongly recommended that you reach out to your preferred stockist or Viberg themselves for sizing advice before making a purchase.

Custom leather artisan, and enthusiast of quality goods. Mechanical watches, loose-weave Japanese denim, all things heirloom leather, silky smooth folding knives — I enjoy any goods that are not only made well, but made to last. Life is too short for bad products.