With so many newer brands in the scene offering not much more than their own version of classic American boot patterns, there are few bootmakers that stand out from the crowd.

One brand that does is J. Fitzpatrick. Situated on Thompson St in Soho, this boutique footwear shop specializes in blending Victorian-era silhouettes with modern shoe designs to give every boot lover something to be excited about again. And if their boots aren’t unique enough for any said customer, they will even offer an individualized patina service for the boots right out of the box.

We sat with J. Fitzpatrick’s owner, Justin Fitzpatrick, to dig deeper into his ethos, and why he started this brand.

Stridewise: What led you to the world of shoemaking?

My first goal wasn’t to be a shoemaker, but to be my own boss and to have my own company. Honestly, I don’t work well for someone else.

I was studying entrepreneurship at the University Of Washington, and working at Nordstrom, all while being very into shoes. In American culture (at least growing up in the 90s), if you didn’t have the latest Nikes or whatever, you could not be a part of the cool crowd. So I aspired to have the best ones.  Shoes became the number one priority in my outfits.

Now, while working in footwear, and reading magazines, I would see all the beautiful shoes sold in Europe and the disconnect with the ones sold at Nordstrom. The magazines would often talk trash about American style and I thought, how can we dress better when we don’t have access to better? If department stores were only selling crap, then we can never become better.

I wanted to change that and I wanted American men to dress well so that we would have a better reputation.  I know we have style, but it’s just that we don’t always have access to the good stuff.

Right then and there, I decided I’m going to start my own shoe brand. I’m going to make the most beautiful shoes that I felt I could do at a good price that could reach a large population of the world.

Stridewise: So when you started J. Fitzpatrick, did you have a particular aesthetic in mind?

I never had a specific [aesthetic] in mind. My journey took me to Florence, Italy where I learned bespoke shoemaking for the famous shoemaker, Stefano Bemer. The shop would open at 9 am and I would be the first one there. I would just sit in his sample room and absorb his designs. That was really my influence outside of reading [shoe] magazines.

When I moved to London, I spent time with British companies and frequently traveled to Paris. I amalgamated all of that culture with my own culture and made footwear based on everything that I was absorbing.

It wasn’t ever planned, but the basic plan was to do classic shoes with my own twist.

Stridewise: What are your best sellers or best-known shoes?

When I started the brand, I had always wanted to make a button boot. At that time, there were only two places in the world that offered them outside of bespoke. It was a French brand called Aubercy, which is also one of my favorite shoemakers, and there was another Japanese brand. Obviously, you can only get Aubercy in Paris and the Japanese one, you can only get in Japan. So, if you were in America and wanted button boots, then you would need to fly to one of those countries to get them.

I wanted to change that and I wanted to make the boots more affordable, because both of the brands were a bit pricy.

At first, when I told my factory that I wanted to make this style, they told me they couldn’t do it. I was timider at the beginning so I just let them tell me no. But then a year or two went by and I said to them, “I want to make this style, and if they can do it, you can do it”. So they did, and it just took off.

It was surprising because nobody really dresses like they were in the Victorian era.

Stridewise: Are there any functional advantages to a button-up boot? Is it more secure on the foot or an aesthetic thing?

No, it’s just being true to the original [Victorian] design.

Stridewise: I notice this shoe behind us, is this your best seller?

This shoe is called the Stefano. It’s a saddle shoe and actually has a history with Stefano Bemer. This is a reiteration of his creation. This was also the shoe that really grabbed me when I was there and is the shoe that defines my brand. It’s classic, two-toned, with a striking, sharper last. This saddle shoe kind of created my ethos as a designer.

The last shape that it comes on is the last that I made when I was apprenticing. So yeah, this one is really like my heart and soul as a designer. I actually made one of these shoes by hand and it’s currently in my garage. The one here is a factory-made sample.

Stridewise: Another thing J. Fitzpatrick is very well known for is their patina artistry. You can get a new pair of shoes and give them an artistic patina. Can you elaborate on that?

Editor’s note: Patina is a word that means the desirable effects of aging. Normally, one would need to work hard to get the patinated look but over at J. Fitzpatrick, patrons can get a nice patina painted on their shoes before they wear the shoes.


When we launched our store in New York, we teamed up with a well-known patina artist. So we at J. Fitzpatrick don’t really do the patina ourselves. We work with a patina artist name Greg Park, his tag name is @Hancore. He’s from Paris but lives here in Brooklyn.

It’s becoming quite known that we do these GMTO runs where we would sell shoes and show them in various colored patinas. People would buy it in the color that they like and then we’ll order the shoe in just a raw color and then Greg will create the magic. In theory, the patina will be the same but each pair will be unique because you can’t copy each and every little bit of brush strokes.

We also have a service where clients can send in their shoes. If clients have shoes that have been tired over the years, Greg can strip what’s there and recreate it into a brand new shoe.

Stridewise: In New York, this place gets pretty terrible in the middle of winter. What kind of hard-wearing styles do you have?

We love boots at J. Fitzpatrick. We’re always trying to incorporate more boots into the collection. Last year we went heavy with the Commando sole collection which is great for these New York winters. So this boot [the Snoqualmie] has a special place in my heart as it’s one of my designs.

I’ve always loved the Alpine style, which comes from a ski boot design but I never liked how robust they are in other brands. One brand that does this style is Paraboot, but they have really big toes, and even chunkier soles if you can imagine that. So it was always my idea to slim that design down and make it a city boot, like a city hiker as I like to call it.

I wanted to make a boot that is smart because in the winter you see everybody wearing duck boots and carrying their dress shoes. I would much rather not do that. It would be nice to have a boot that you could wear out in that weather and keep on because it looks smart.

So I made the Snoqualmie out of a dress shoe last that slimmed the toe down and then I put a fine-cut Commando sole on it to make it practical. This is a boot that is slowly growing more and more popular.

Stridewise: Where are we right now?

We’re in Soho, I guess you can call it the west side of Soho, the more restaurant-oriented area. Our address is 101 Thompson Street. We’re between Price and Spring street, a little quaint and cute street on the quieter side of SoHo. We’re open Monday to Sunday 11am – 7pm. 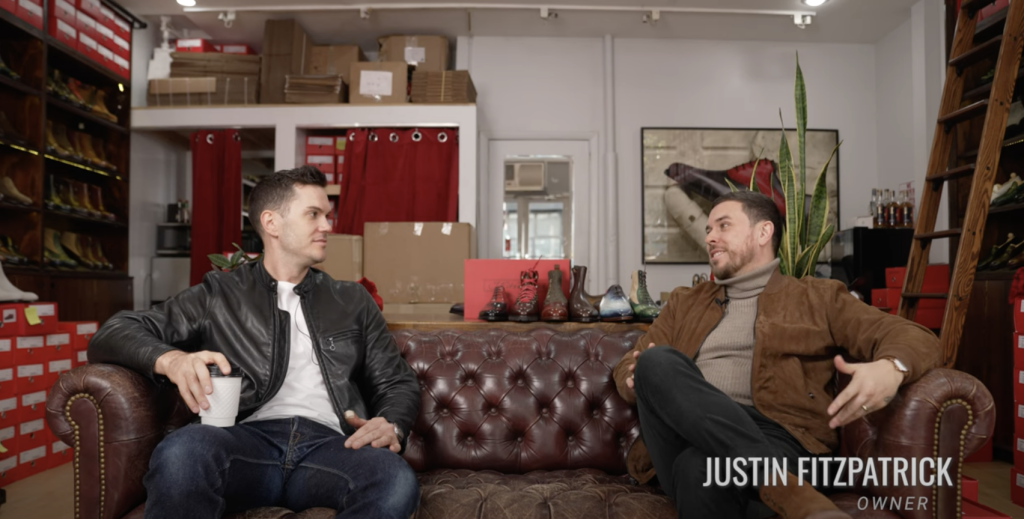 Stridewise: Come on down if you want to see some really interesting, very unique, small business shoes designed by this ingenious man here.

Thank you very much!

It is always refreshing to see new creative makers come into the bootmaking scene. J. Fitzpatrick is really a one of a kind store in New York, and quite possibly in the United States. Today, we went over the brand’s mission with the owner, Justin Fitzpatrick, and showcased a few of its designs and services. To see what else they have to offer including their more budget-friendly label, the JF line, visit their store in Soho or click this link to explore their website.