Founded by Ariel Nelson and Lane Gerson founded Jack Erwin — whoever that is — in 2013, saying they wanted to “build a brand not chasing trends, but rather focused on perfecting a consistent reliable offering.” And perhaps more notably, to build a brand “with prices we could relate to.”

In other words, Jack Erwin makes pretty cheap boots and to help them do that they’re pretty much direct to consumer. They do have a store here in New York City where I bought my pair, but by and large it’s all online. They do have free returns to make that less of an intimidating prospect but they don’t ship internationally at the moment, so foreigners are out of luck.

Whenever I hear the words Jack Erwin I usually hear them followed by “Chester boot,” which is their most popular boot. It’s a pretty New York-y brand and the dude at their store in Midtown East told me that black was their most popular color, so that’s what I went with. Here’s what I thought.

If you’re like me, you probably saw this boot and immediately thought “dressy.” This is one of the few pairs of boots that I own that could comfortably be worn with a black suit, but I walked out of the store wearing these with the same burgundy joggers I wore at the start of my Thursday Boots video and I think they worked pretty well with that informal outfit, too.

These shoes are handmade in Spain from French calfskin and it has a very clean look. It’s a pretty slim shoe, which I’ll discuss more in the Fit & Sizing section later, and it’s relatively compact in that neither the shaft nor the heel are too high.

The most notable feature is the toe cap, which sometimes makes a boot less formal (like with the Iron Ranger) but here it definitely makes it more formal, or perhaps I should say even more formal because, look, this is a dressy boot! The eyelets are subtle, the heel is low, and it has a very sleek, streamlined appearance. 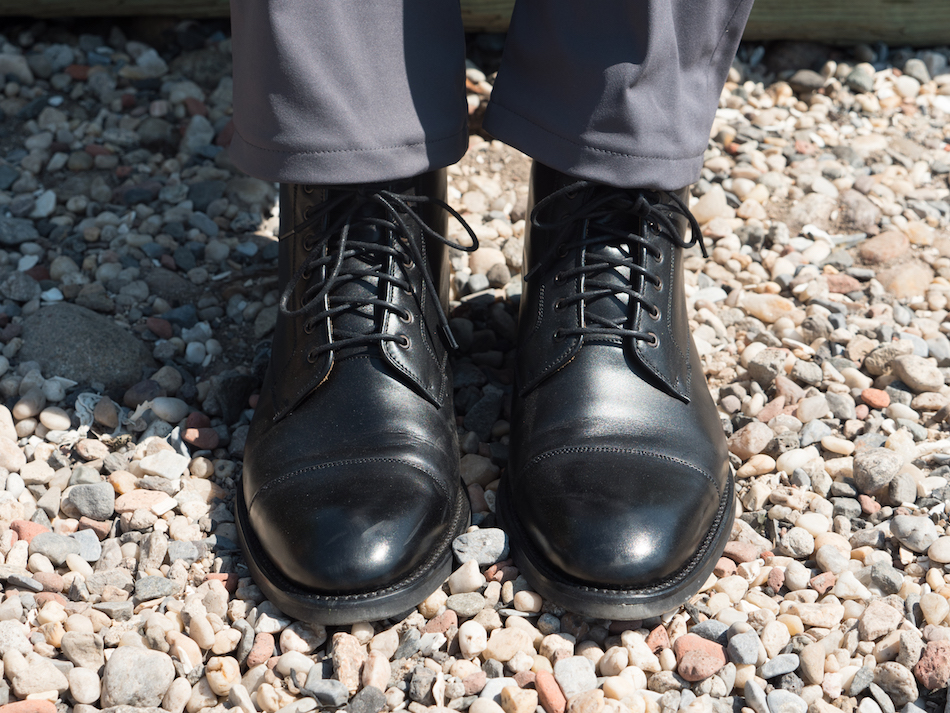 Jack Erwin told me they source their leather from France and that while sometimes their shoes are constructed in Portugal, these are made in Spain.

We’re looking at full grain, calfskin leather that I believe has been somewhat corrected as it’s quite smooth and has a nice sheen to it. (Though calfskin is usually pretty smooth, anyway.) I have said that this is a dressy leather, but it’s not so dressy that it can’t be worn with some grey or blue khakis or some nice jeans. When I say that, I’m remembering Frye’s Jone’s Lace-Up, a pretty dressy boot that looked great in a blue suit but was very hard to dress down. That’s not the case with the Chester.

When you’re comparing calfskin and cowhide, the difference is that cowhide is, well, a lot of people say “masculine” but I’d just say cowhide has more of an appearance of durability whereas calfskin appears more delicate. I’m emphasizing “appear” because ounce for ounce calfskin actually has more tensile strength than cowhide because the fibers are closer together. But it still gets considered more of a delicate leather and so you see it more often on dress boots. Another big bonus of calfskin is that it wrinkles more finely as it ages, which is nice.

The Chester boot is also vegetable-tanned, which means it’s processed using tannic acids found in plants and tree bark and stuff like that. Generally speaking, it’s more expensive and time-consuming to produce but it’s a bit more environmentally friendly than something like chrome tanning, which has really messed up some areas of India and Bangladesh.

So there are a lot of things going for this boot on paper, in the real world when I’m actually holding them in my hand, well, the leather doesn’t feel especially durable or hard wearing. I can’t attest to this personally, but a common complaint that I’ve heard about these boots is that they don’t age super well. They wrinkled after a couple of days of wear and I wouldn’t be surprised if these don’t wind up my most long lasting boots. 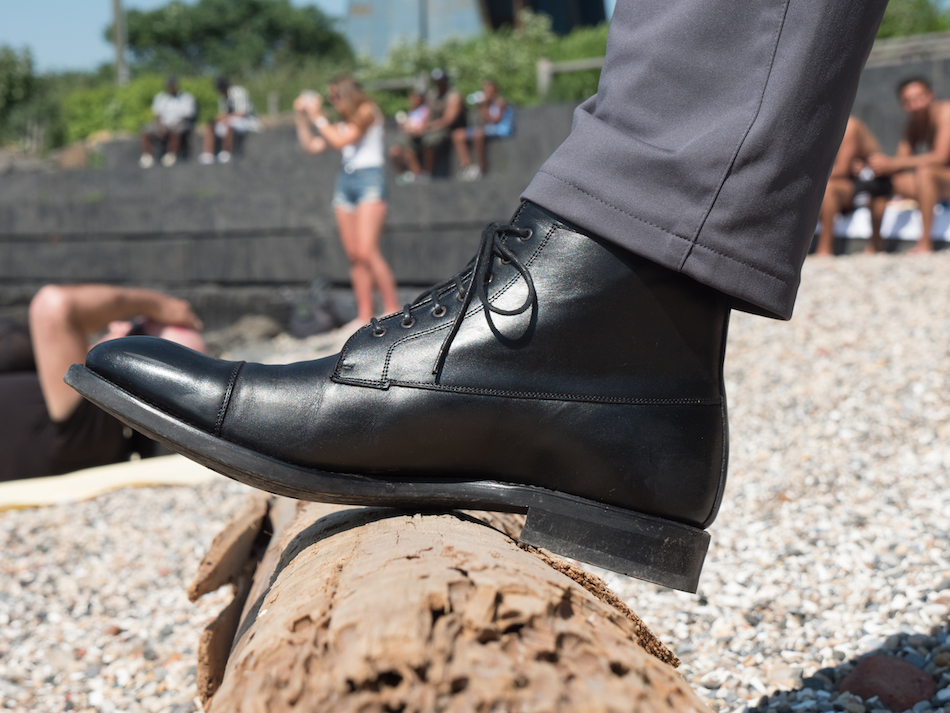 How often you condition them depends on how distressed you want them to look, but when you do want to condition these I’d recommend the old go to, Venetian Shoe Cream. The clerk at Jack Erwin strongly advised that you clean and polish these with a good quality horsehair brush, partly because a vigorous scrubbing with a brush helps to heat up the leather and move the oils around but also because the horsehair is fine enough that it’ll do a better job of pushing the polish into the pores of the leather, making it better at buffing out scratches.

If you wanted to use them in like inclement weather they recommend a waterproofing spray from Coach or Cole Haan. I’m sure some of you out there would think that’s a sin to waterproof boots like these, but just going by what the guy told me in the store.

Finally, he made this very clear: always use shoe trees. 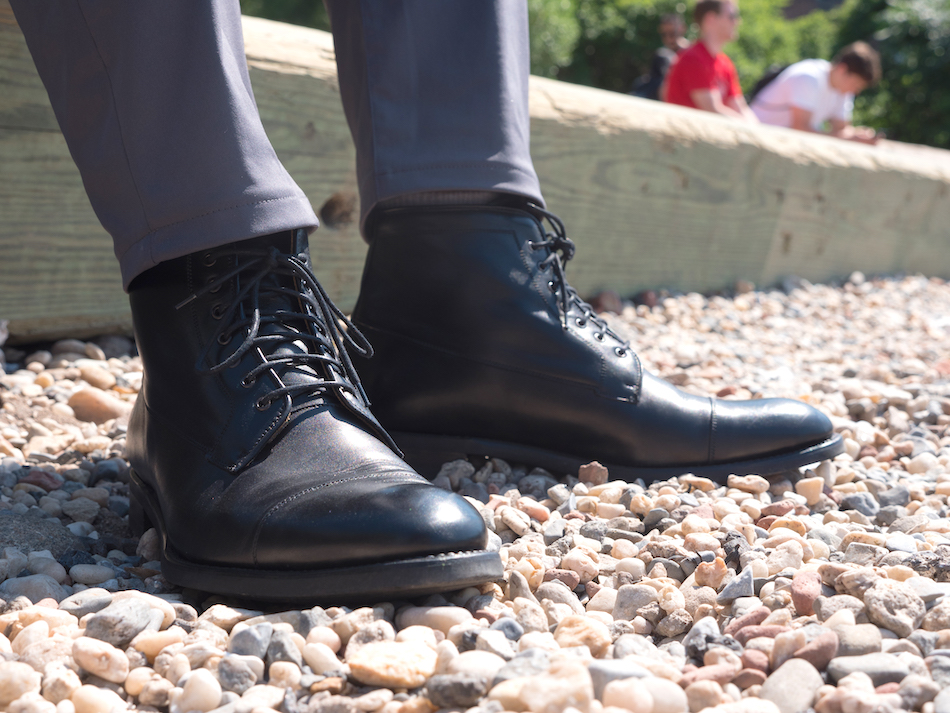 This is a basic, medium density rubber sole and Jack Erwin is clearly trying to make you think of Dainite when you look at it, especially with the identical stud pattern. But this seems to be their own rubber, which is one of the reasons this is a cheaper boot — Dainite and Vibram soles can really jack up the price of a boot. I found the grip pretty comparable and had no complaints.

After the rubber outsole you’ve got a stacked wooden heel — I would have liked leather for a bit more shock absorption, to be honest — and there’s a padded leather insock.

When it comes to the welting, the guy in the store told me this is Blake stitched but Jack Erwin’s website says it’s Goodyear welted. I was very confused until I read the bottom of the shoe, which does indeed say it’s Goodyear welted. That means there’s a layer between the upper and the sole which makes the shoe a lot easier to resole and it makes it more water resistant too.

So some guys will find that to be an unusual bonus for a dress shoe, some guys will be disappointed because it is common for dressier boots to be Blake stitched, which means the upper is sewn directly to the sole. Blake stitched boots have a more flexible sole that looks a bit more formal and is easier to break in, so it depends on what you like with your boots. I will say that the Chester pretty hard wearing sole for a dressy boot, but they are indeed tougher than you might like for something you may wear to work. 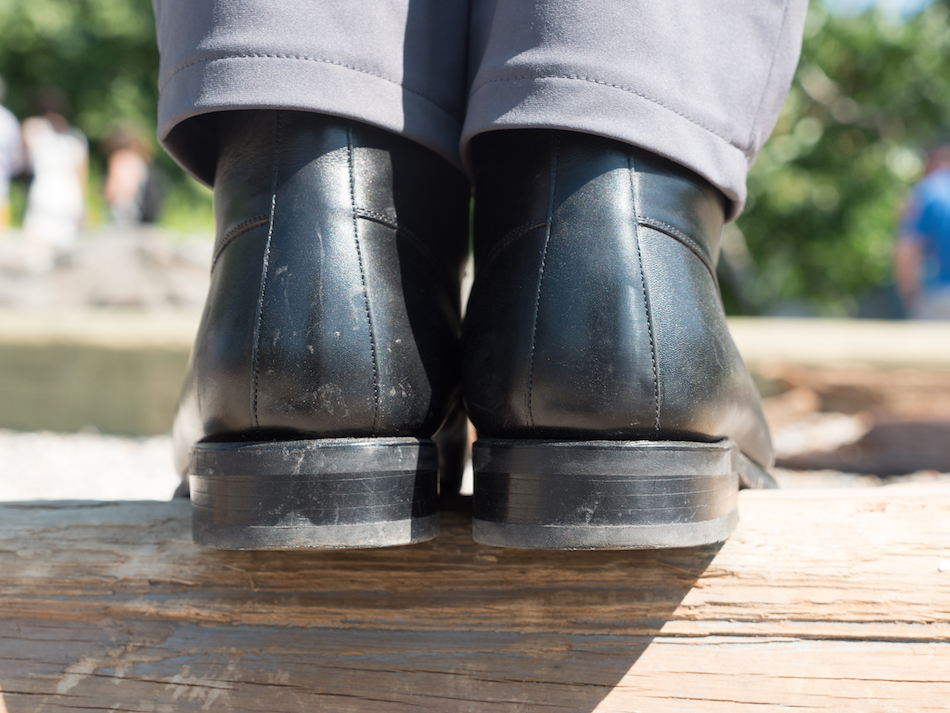 This can always change but right now these shoes run from sizes 7 to 14 and while most of my boots run large I found the Chester fit pretty true to size.

Now, I had some issues with the fit. Personally, I found that it was pretty narrow, especially on the left foot, which was really surprising because I’m always a D width and I’m never bigger than 11.5.

This shoe is only available in a D width and this is really the only time I’ve ever wanted to try an E. When walking around in these I had serious pressure on my pinky toes and while that did let up as the shoe broke in, it still feels tighter than I’d like.

Now, I lent this shoe to a few friends who share my shoe size and about half of them agreed with my assessment and half said it felt fine, so your experience may differ. Unfortunately, I can’t be definitive with your experience as a D width but if you are any wider, I will say that you definitely shouldn’t buy these. The break in period is hard enough when the shoes are close to your shoe size. 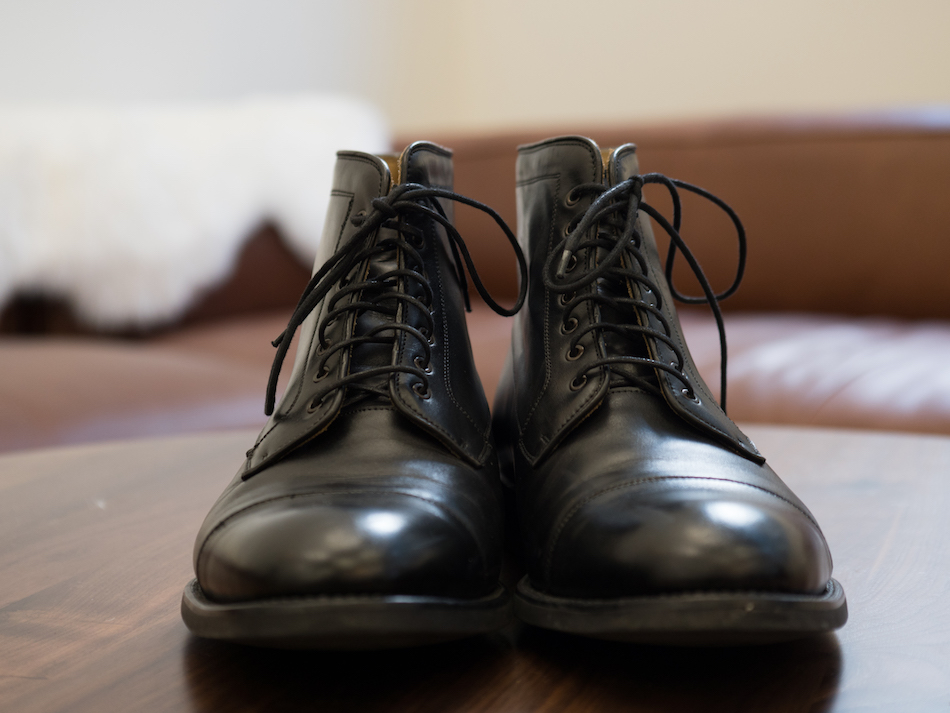 These shoes are just $220 a pair. That’s the price on their official site and on Huckberry.

That’s very well priced and it’s the brand’s biggest selling point. When looking at calfskin, Goodyear welted boots you can typically expect to pay a good $350, which is generally considered the “correct” price to pay for boots: pay more and they had better be amazing, pay less and you deserve garbage.

The Chester boot isn’t garbage. It’s not worth $350, but I’m still pretty content with the price. 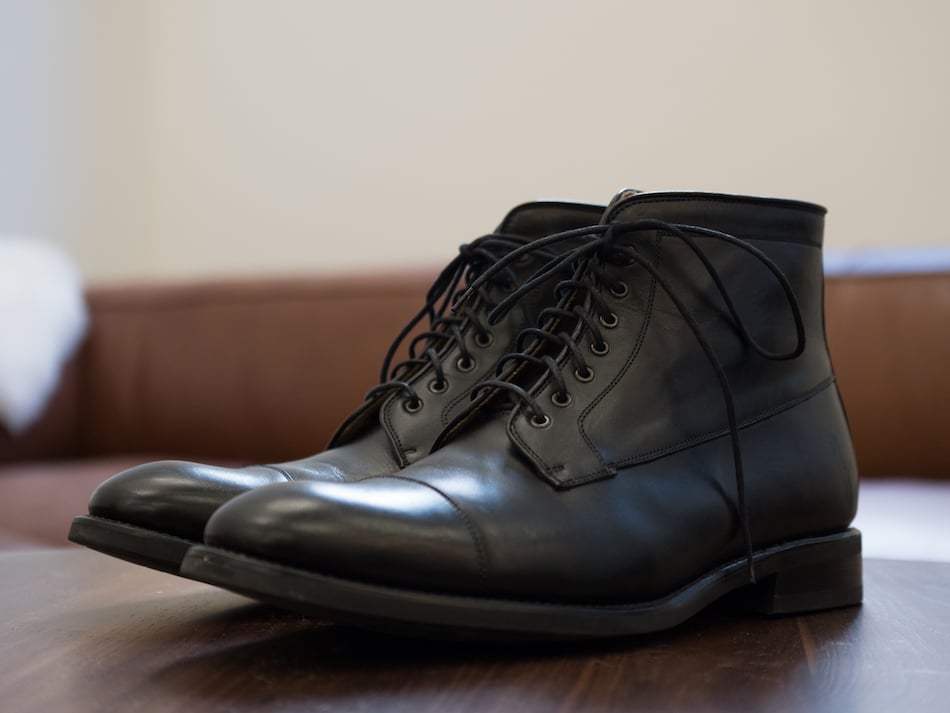 Is the Jack Erwin Chester Boot Worth It?

The downsides are the tough break in, the shock absorption isn’t great, the leather might not age well or hold up to damage, and I just didn’t like the fit. Again, I can’t universalize my experience with the fit because half my friends thought it fit them fine, and that’s my final verdict: if you can get a pair that fits then they’re a good buy. That’s just kind of a big “if.”

10 thoughts on “Jack Erwin Chester Boot Review – Why So Cheap?”