LL Bean is one of the few companies I’ve reviewed that isn’t an actual, dedicated boot company. They’re a privately held retail store that was founded in 1912 by Leon Leonwood Bean when he was 40 years old and they’re super famous for their American made outdoor gear. When it comes to boots, they’re perhaps best known for their half leather, half rubber, waterproof “Bean Boots.”

But among fans of quality, Goodyear welted boots — y’know, men like you — they’re better known for their “Iron Works®” Katahdin boots (shameless Iron Ranger ripoffs) and the boot I’m looking at today, the much dressier Hawthorne boot.

So if you’re looking for a slim, flat toe boot that can be worn to the office and you’re on a budget, could the Hawthorne boots fit the bill? Let’s check them out.

These are pretty sleek, flat toe boots. They’re not chunky at all and while there are a few issues I’ll discuss below that keep these from being a great example of a plain service boot, I can still see them being dressed up for a business casual outfit.

Sure, they’ve got speed hooks and open lacing and flat laces, all of which can reduce a boot’s dressiness. But overall, I think the upper is pretty aesthetically pleasing and they certainly dress up better than Iron Rangers or 1000 Miles.

They’re also leather lined — surprising for the cost — but I need to mention that the pull tab tore off on my third day of wearing these. And all I was doing was using them to pull my boots on. (You know, what you’re supposed to do with pull tabs.) So the Hawthorne definitely lost points for that, and it was a wake up call to remind me that these are super inexpensive shoes.

This boot has been available in suede in the past, but it seems to have been discontinued. The leather I got is called “cognac.” The boot is made in El Salvador — important to note, as many people buy from LL Bean because their stuff is usually made in Maine — and the leather uses elements of chrome tanning, which is why it’s a little more brilliant than your standard vegetable tanned leather.

[Learn more: Chrome tanned vs vegetable tanned boots — why does it matter?]

But it certainly doesn’t have the depth of color you get in combination tanned leather like Chromexcel, this is a little plasticky. In fact, I’ll just say it: this is not great quality leather. I need to make two things clear, though: this leather is not great quality but for the price it’s not bad. I didn’t get much loose grain or weird creasing and I’ve certainly had worse leather in my time. I can’t stand here and say I loved the leather, but I’m not upset with it either: it’s more like I accepted it. 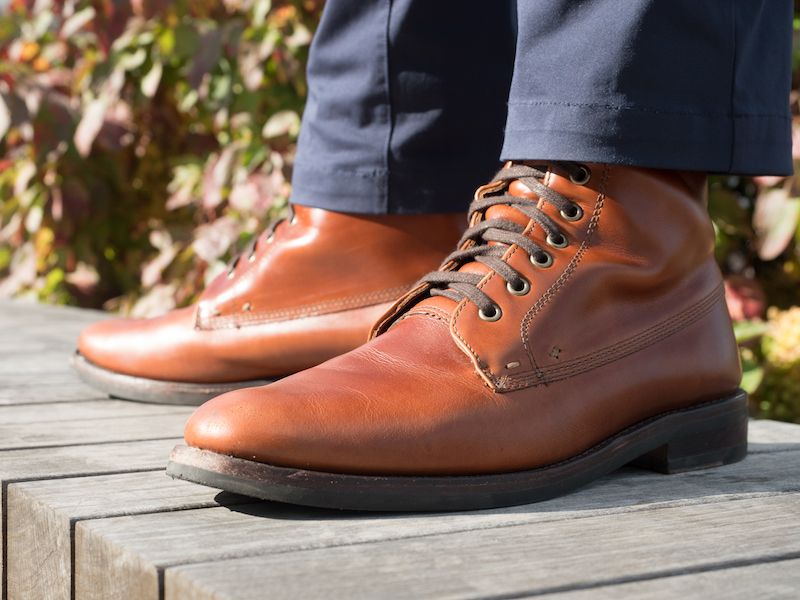 As for care, you’d just need to brush off the surface dirt with a soft horsehair brush, wipe or spot clean it with a damp cloth, and let it dry away from direct heat sources. (Leaving it in front of a fire or a heater is likely to dry out the leather and leave it prone to cracking.)

The products they recommend are the same you’d use on leather or nubuck, which is pretty indicative of the quality of this leather. If you’re after conditioning and a bit of water resistance they, of course, recommend their own conditioner called Boot Guard. That’s made from beeswax, lanolin and some other oils.

They also like Nikwax’s Conditioner for Leather or if you want something a bit more geared toward water resistance, they like McNett’s ReviveX. 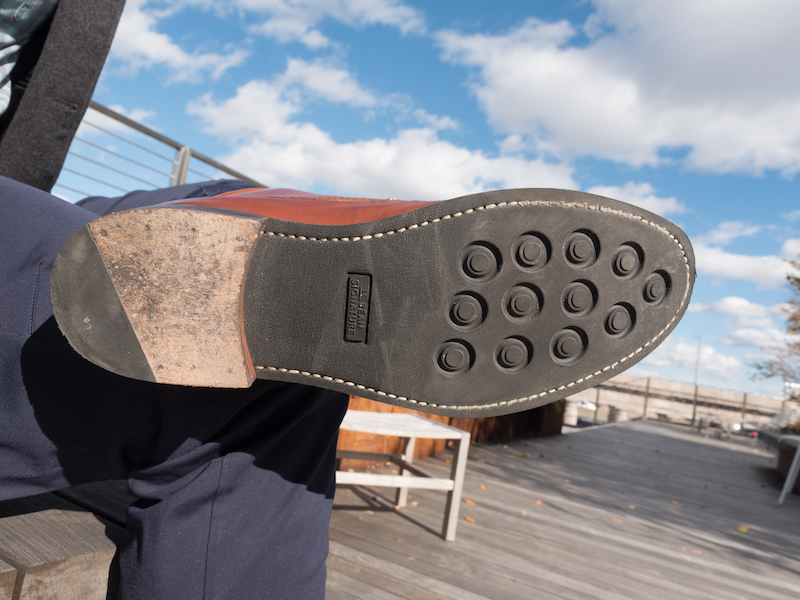 This sole is rubber with a bit of leather on the heel, and it’s clearly meant to look like Dainite. That’s a very nice rubber used on higher end men’s boots like Viberg and Allen Edmonds. Dainite is known for being a great compromise on grip and durability and softness, but compared to Dainite, the Hawthorne is way worse at shock absorption. Way worse.

I think the reason for that is that there is no midsole whatsoever. However, the insole is nylon covered molded polyurethane, which I would have expected to improve the shock absorption a little. But it’s really not great, it feels like walking on wood.

Otherwise this is made with a Goodyear welt, so you can resole it if you so desire, and it has a full length welt board, which means there’s a strip of leather in the shoe between the sole and the upper. So you could describe this as having a leather shank, which offers a bit of stability to the shoe overall.

[Read more: Goodyear welt vs Blake stitch, which is best for you?] 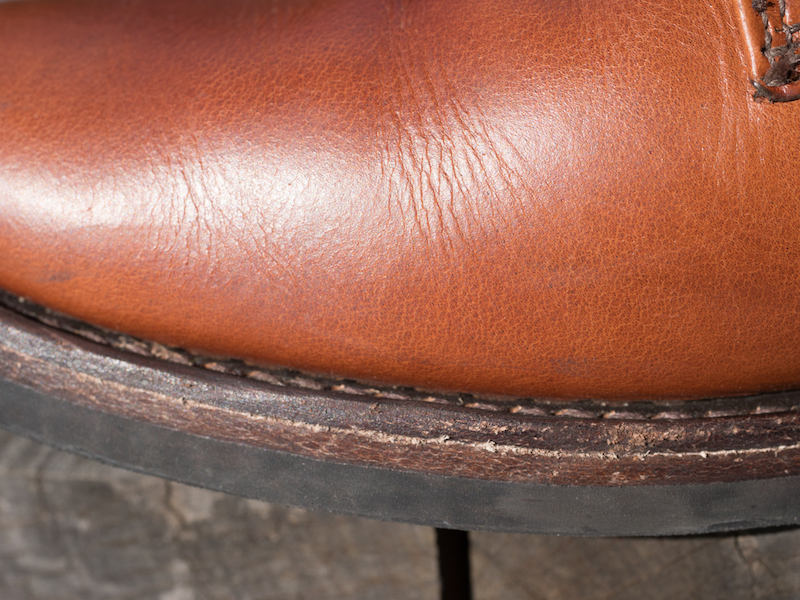 This boot is true to size: I ordered an 11.5D and while I hear a lot of people saying they needed to size down, this fit me fine. Sure, the leather was stiff out of the box, but I didn’t have any break in and the lining has a lot of air in it so it’s pretty darn comfortable, although I do need to emphasize that the shock absorption was bad.

Unfortunately, there are no other widths available here and I’d be remiss if I didn’t mention that a lot of people out there think these are too narrow. I didn’t feel that way myself, but if your feet are even close to an E width you might be worried about this.

[Want your boots to be as waterproof as possible? Check out my guide to waterproofing nice boots.] 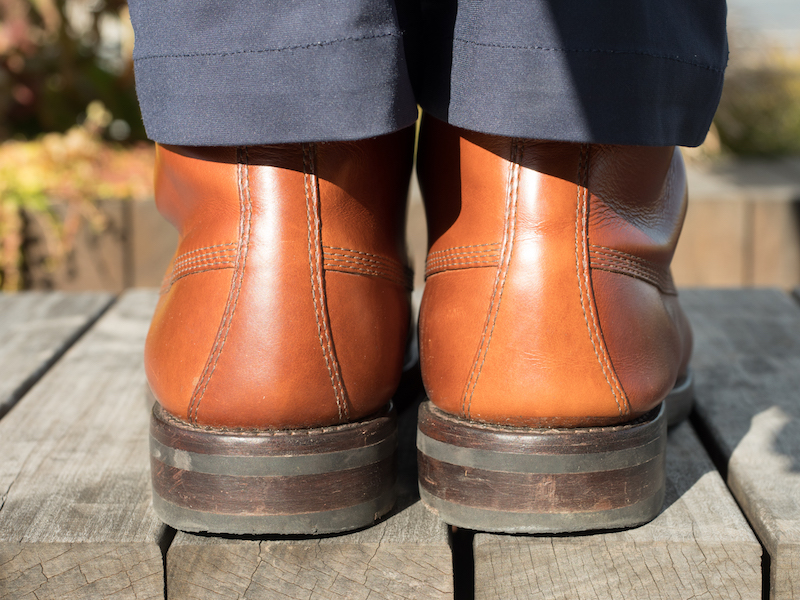 That’s cheap. Now, if I had a $150 to $200 to spend on a pair of boots I would definitely just get a pair of Thursday Boots, which cost $199 a pair and are light years ahead in quality, but if you like the look of these Hawthorne boots you are not risking much with $150.

This is especially true because if you don’t like them and if you hold on to your receipt, you can return them any time in the first year. 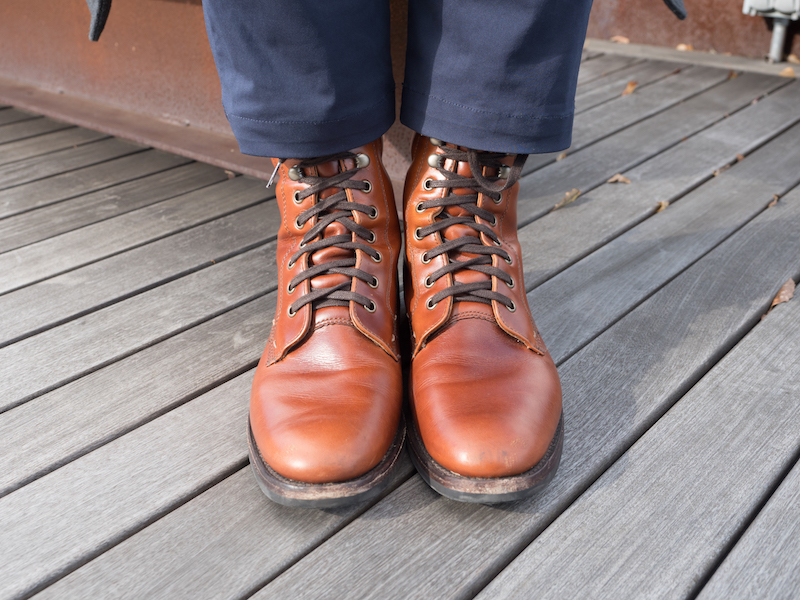 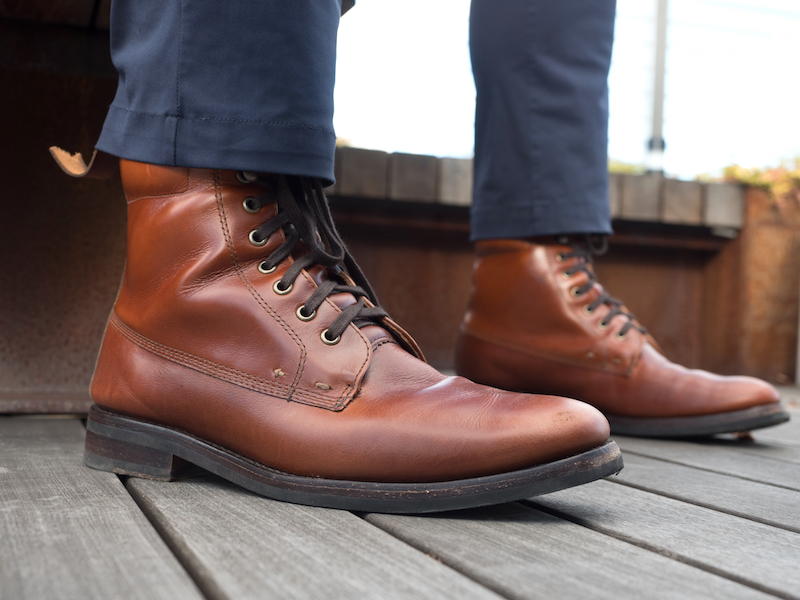 Honestly, these boots just don’t feel very substantial. If you’re looking for a boot that feels like a boot, this isn’t it. But they’re lightweight, inexpensive, and look decent with khakis and a blazer so as a cheap option for business casual or semi casual footwear, I think they’re fine.