So you’re willing to spend a hundred dollars on a t-shirt. You don’t want to keep wearing clothes that come in a packet of three for ten bucks — you deserve more. You’re a grown up!

Isn’t there some ultra premium version of a t-shirt you can wear under your high quality leather jacket or on top of your selvedge jeans?

The answer, if you ask around, is probably going to be yes: loopwheel.

There’s a claim that loopwheel t-shirts are the best quality t-shirts you can buy and when they’re going for over a hundred bucks, they better be. But are there any practical benefits to this unique kind of construction, or is it just hype and marketing?

To find out, more about this 100-year-old knitting method and decide if I wanted to cross the heritage rubicon into the world of slubby, high-end t-shirts I interviewed David Claxton, the Creative Manager at Son of a Stag, the UK’s largest heritage menswear shop.

The t-shirt is a modern garment, first surfacing as a standard issue undergarment for the US Navy some time between 1898 and 1904.  The first t-shirts were basically just long underwear cut at the waist and arms but after WWII, the t-shirt started being worn as a stand-alone garment and become an iconic look atop jeans and under leather jackets for rebellious lads who, at the time, were seen as redefining fashion by wearing clothing as civilians that was originally meant for labor or service.

Many t-shirts in the early 20th century were made with loopwheel machines, but this construction method eventually fell out of use during in favor of cheaper production tools and the last loopwheel machines were built in the 1970s.

Nowadays, you can only get loopwheel knitted fabric from one manufacturer in Europe (where famed loopwheel brand Merz B Schwanen makes theirs) and a couple in Japan. T-shirts made this way are very rare, very slow, and very expensive to produce.

What is Loopwheel Knitting?

“Loopwheel is basically the way the fabric is constructed. It’s the more traditional method that most companies don’t do it now because it’s so time-consuming,” says Claxton. “Basically, they are tubular knitting machines that hang from the ceiling of factories and they knit in a circular motion. Basically, the integrity of the fabric is protected at all points.”

This is why loopwheel t-shirts famously have no side seams that are holding together two halves of the shirt: the shirts are created in a tube (or loop) of fabric all at once.

The machines are very inefficient by modern standards, only producing about a meter of fabric per hour — modern machines produce fabric more than 10 times faster than the loopwheel.

The machines can only knit one size at a time, unlike modern machines that produce panels of fabric that can be stitched together to make multiple sizes. This means that for every size of a shirt, you need a new, separate machine.

“With loopwheel, every loop has a particular size,” Claxton explains. “If you’re wearing a 40, there would be a wheel for that size. The body is knit on a tube and then the arms are put on.” 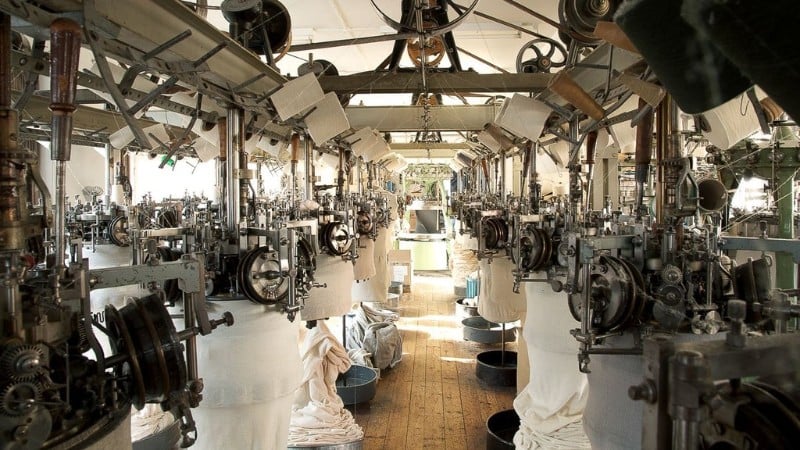 Another noteworthy aspect of loopwheel shirts is that the fabric isn’t put under tension during the sewing process. It’s the tension in the fabric that causes the deformities of t-shirts that can accrue from wearing them and washing them — that’s why your inexpensive t-shirts barely last a year before they’re stretched out and turn misshapen.

“The integrity of the fabric is protected at all points,” says Claxton. “No side seams, you’re not going to get as much movement in the garment as you would with modern reel fabric production.” 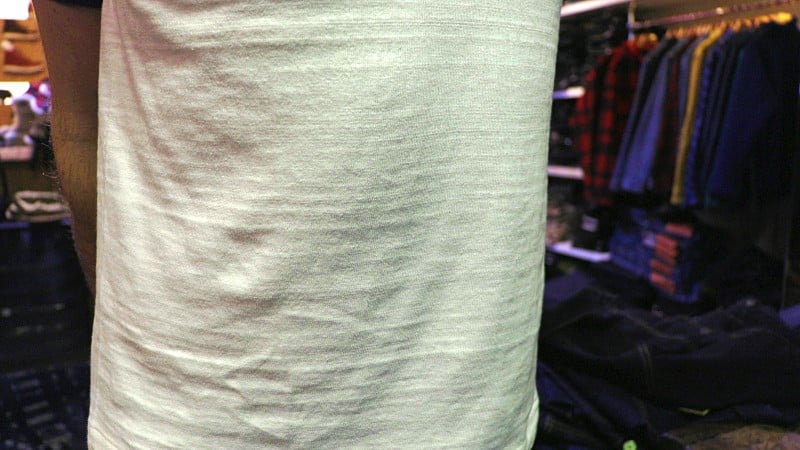 So we know how loopwheel shirts are made and why they cost so much extra: they produce shirts some ten times more slowly than modern methods.

But that doesn’t mean the shirts are necessarily better than modern machines. Is there a reason I should want to pay extra if I’m not particularly seduced by the simple fact that it’s an old fashioned production method?

They Hold Their Shape Better…

They have a much more bouncy feel to them, the integrity of the fabric is much more durable. They just don’t lose their shape. Which is why people go for them.

That means less stretching, twisty stitching, and frustrating shrinkage, so your shirt will last many times longer than your old two-per-bag tees — that makes it worth the extra price. (Unless you want to gently hand wash your cheap tees to minimize distress to the fabric and form, but who wants to do that?)

… While Conforming to Your Body Better

It doesn’t stretch out, but it does conform to your body in a flattering way.

Like looser weave denim jeans, the loose weave of a loopwheel shirt means it’ll stretch when you apply tension without damaging the fibers — it can stretch a little bit without “stretching out.”

What that means is that the shirt will stretch where there’s tension and mold to the shape of your body over time, but it won’t stretch and shrink based on whether it’s just been washed or worn like cheaper tees.

“That’s a payoff between the type of cotton that’s being used and the density of the weave,” says Claxton. “A loose weave will move more to the way you move but still maintain its shape.

A loopwheel shirt is both more durable and more flattering.

You’re not just paying for a brand name, you’ll save money in the long run because you’re not going to be throwing out your t-shirts, plus they’re easier to repair: if you’re moderately handy, small holes are very easy to darn compared to cheap tees.

“They last longer, and they fit you better for longer,” Claxton concludes.

While quite a few brands make loopwheel cotton products like sweaters, hoodies, and t-shirts, most of the fabric comes from a handful of producers who have access to the old machines.

“A lot of Japanese companies produce good loopwheel, but MbS is the only company in Europe that produces loopwheel fabrics,” says Claxton. “We have been dealing with them for a quite a long time now because the quality is incredible.”

When a product is expensive, a lot of the time it’s simply because of the brand name. I’ve looked at luxury bags, for example, that cost five figures despite being made of the same materials as bags under a thousand. Sure, sometimes the nice brand employs some cool design cues, but the price is largely because that’s what the brand can get away with charging.

What I love about heritage fashion like loopwheel shirts (and leather boots and wool coats and so on) is that you’re paying for durability and craftsmanship, not a fast fashion gimmick. t

I’m willing to bet every t-shirt you’ve bought in the past has stretched out. Loopwheel shirts don’t stretch and they fit better. In my book, that’s a slam dunk — loopwheel is worth it.

4 thoughts on “Are Loopwheel T-Shirts Worth It?”