I was born in Texas, which automatically makes me an expert on cowboy boots. However *begins speaking in a whisper* I haven’t actually owned a pair of cowboy boots since the plastic heel fell off the pair I bought at Payless for some embarrassing fraternity event back in college.

This is, perhaps, because I moved away from Texas at the age of three and have been masquerading as a coastal elite ever since. But the point here is that I was long overdue for a new pair of cowboy boots.

Enter Thursday Boot Company’s Rodeo Boot. Made of high quality leather or suede, hand stitched with a classic Western pattern, and boasting a sleek yet classic silhouette, these are the kind of archetypal cowperson boots that I could wear in the long-lost state of my birth without embarrassing myself. Even if I insist on henceforth calling them cowperson boots because gender is a construct.

Take life by the horns Never stiff and never flimsy, these Western boots have the addition of shock absorbing soles and the crazy low price of $199.

Check best price
We earn a commission if you make a purchase, at no additional cost to you.

Connor Wilson and Nolan Walsh founded Thursday Boot Company as college students in 2014, basing their business idea on the idea that high quality boots shouldn’t cost so damn much. This is especially true of which, if they’re made with a resoleable Goodyear welt, are basically always over $300.  Their goal was to create an ever-evolving collection of footwear that looked and felt high quality, yet rang in mostly under $200 thanks to their low direct-to-consumer markups.

The brand was building their lineup and their cred for a good eight years before venturing into the thorny, snake-filled world of Western boots. Did they get it right? 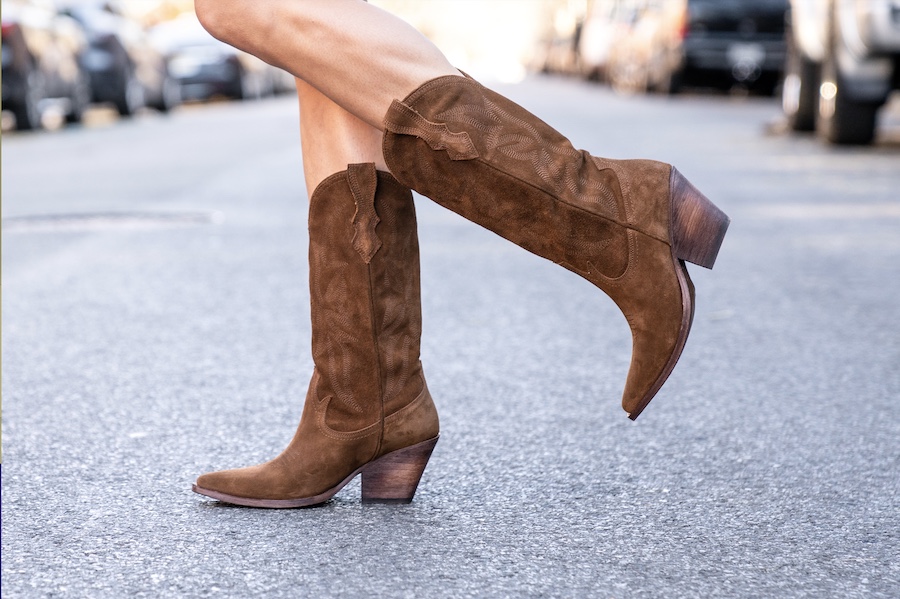 With its pointed toe, 12.25” slim-but-roomy suede upper, and angled 2.75” leather heel, this is a seriously flattering boot.

It’s also pretty archetypal in the Western footwear category, sort of the proto-cowboy boot, if you will. While the company has a few different models in their Western collection, the Rodeo is the one anyone would think of when they think of “cowboy boot.” It’s tall, it’s sleek, and it’s begging to be worn under Daisy Dukes.

It comes in four colorways: black, white, a burnished dark brown called Anejo, and the sole suede that they call Cinnamon. They give  real Woody from Toy Story vibes, but sexy. The boots hit me, a 5’8” cowperson, at mid-calf.

A fun fact is that the slant you often see in Western boots are intended to help men and women working with unpredictable horses, preventing the foot from sliding forward in the stirrup. 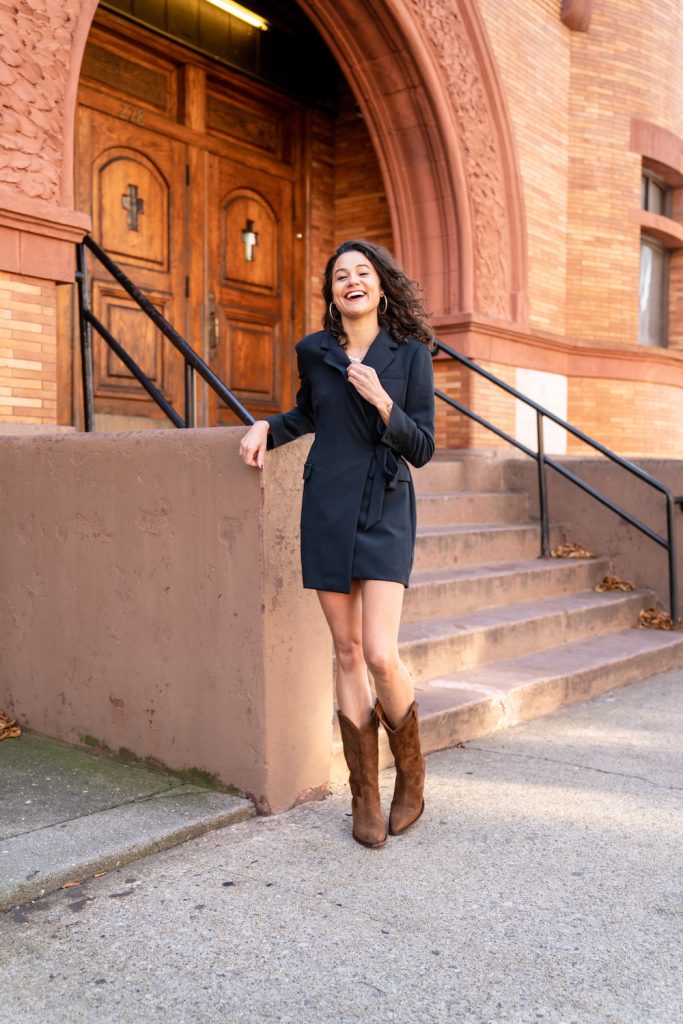 The soft and durable suede exterior of these boots means they never feel stiff, even straight out of the box, while the full glove leather interior lining means they’re soft and comfy on the inside. However, while the insoles are high-cushioning, shock-absorbing Poron — making for a softer step than your average cowperson boot — the pointed shape of the toe does take some getting used to. You might want to break these in with a pair of thick socks for a few days before herding through the canyons (or, as the case may be, along the sidewalks and various dive bars of Brooklyn).

The outsoles are made of premium leather, which means that even though they’re far less slippery than my aforementioned Payless atrocities (#tbt to that time I fell down the beer-slicked stairs of Chi Phi dressed as a “rod-e-hoe”) they’re not as grippy as your typical rubber-soled boot. My tip is to intentionally scuff up the bottoms a bit on some rough pavement before you hit the streets, and exercise a general sense of caution on polished floors. That said, even if you aren’t intentionally scuffing the soles, they’ll get good and scuffed the first time you wear them anyhow, and scuffed up leather is actually surprisingly grippy. Don’t be too put off by the initial smoothness of the sole; the grip is coming, and the anti-slip base on the leather heel should reduce your chances of fully eating sh*t.

[Related: How to Clean Suede Boots] 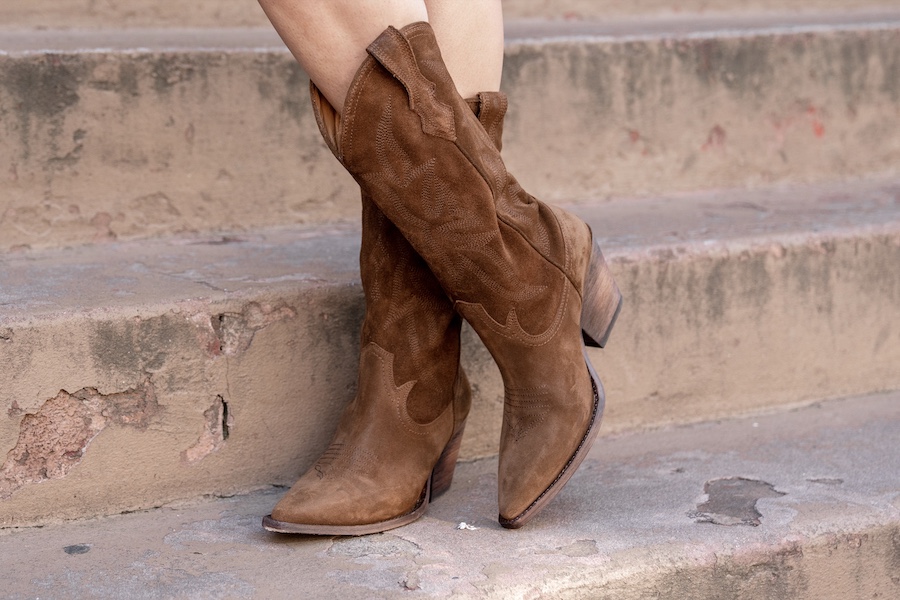 A lot of traditionally made cowperson boots are only leather and cork in the construction, making for something that slowly gets comfortable, but never feels like a sneaker. The Poron avoids that walking-on-hardwood feeling of old fashioned boots, blurring the line between sneaker and boot.

Unlike the male-idenitifying version of Thursday’s cowperson boots, a.k.a. the Desperado, which are made with Goodyear welt construction, these femme-identifying boots are cemented, further blurring that sneaker-boot line in a way that might be sacrilegious in some parts of Texas. But these boots being cemented (so the upper is affixed to the sole with adhesive like almost every women’s boot) means they’re more comfortable, flexible, lightweight, and inexpensive.

Here, the top of the boot is glued to the sole rather than the typical boot construction of multiple heavy layers of leather and cork and welts and ribs and so on.

[Learn more: The Best Women’s Boots That Are Goodyear Welted] 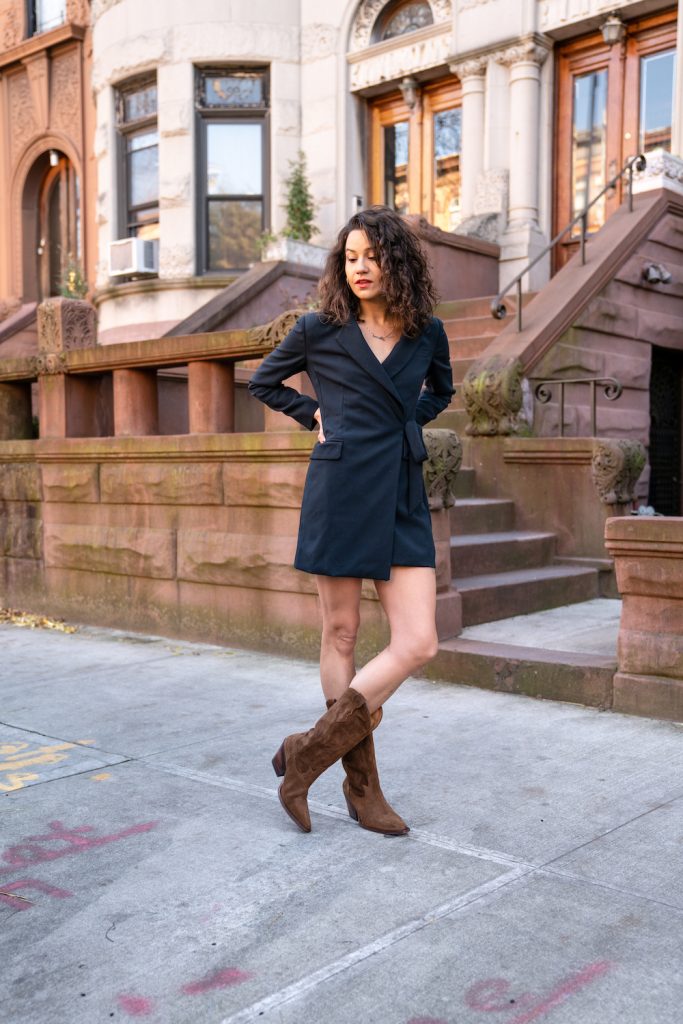 Pointy toe notwithstanding, these run true to size. This is in contrast to the from Thursday and just about every other boot company, which require gents to size down. I copped the Rodeo in my usual size 9, no muss, no fuss. 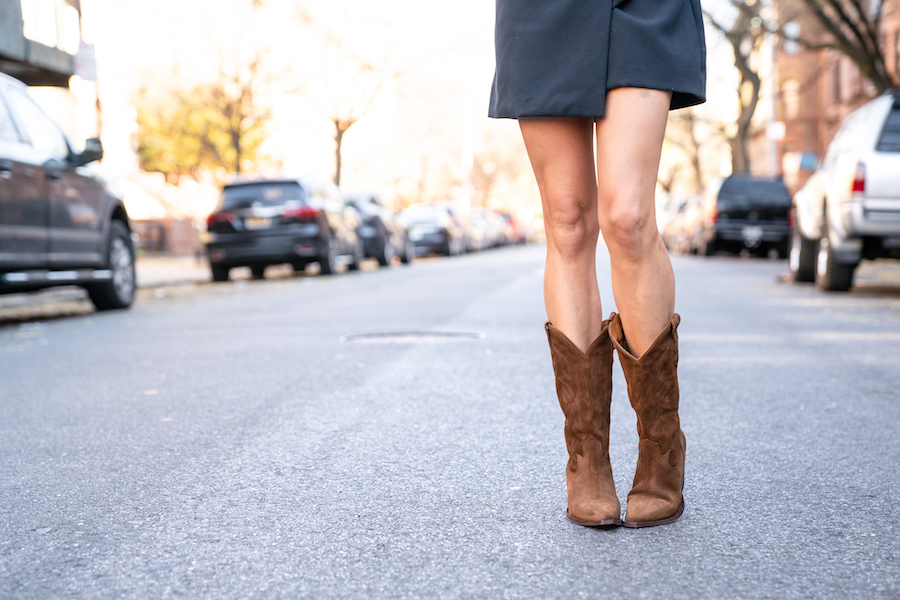 Thanks to Thursday’s direct-to-consumer business model, they cut out the middleman, keeping their boots affordable without sacrificing quality. These come in at a very reasonable $199. If you’ve spent as much time around boots as I have, you’ll feel the quality in the leather and recognize that the lining and the Poron make for an unusually premium feeling for what many consider knockaround boots.

Take life by the horns

Never stiff and never flimsy, these Western boots have the addition of shock absorbing soles and the crazy low price of $199.

Check best price
We earn a commission if you make a purchase, at no additional cost to you.

If you are in the market for a pair of cowperson boots, you can’t go wrong with the Rodeos. With their sleek yet classic Western style, quick break-in period, comfy sneaker-like construction, and reasonable intersection of price and quality, they might even convince you to take up horseback riding.

is a James Beard nominated writer and the Culture Editor at Bon Appétit. She was born in Texas and raised in Massachusetts but spent some highly formative years in Atlanta and Chiang Mai, Thailand. Now she lives in Brooklyn where she may or may not be thinking about writing a book.