The go-anywhere heritage boot that makes a statement or says nothing at all. Jungle boots can be punk, unassuming, or perfect for your profession. These boots are great for those who need to move fast or are standing all day, and the big bonus: you can get them for a relatively low price (~$130) and there are numerous ways to style them.

They can be a little tough to break-in and are unfortunately not recraftable, but are worth a look for those who need to protect their feet. 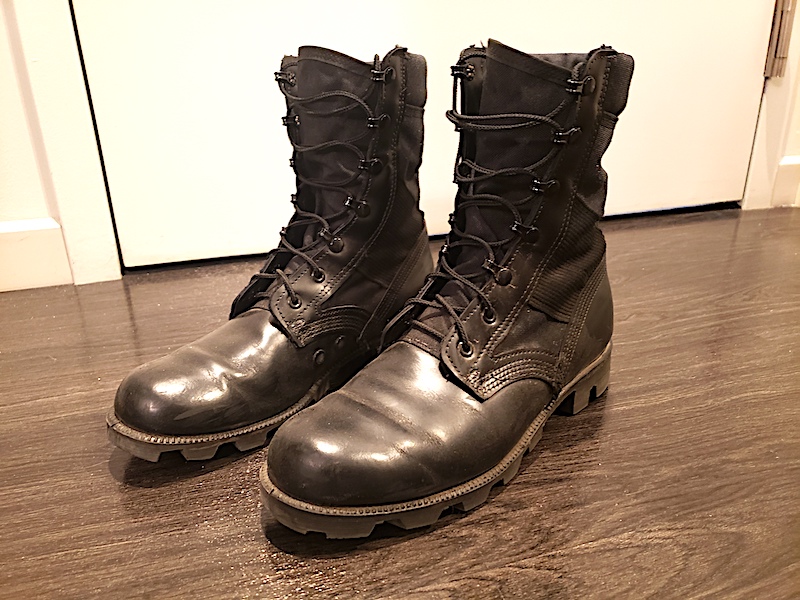 Originally issued in 1942 for the tropical theatres of World War Two, the Jungle Combat boot is most associated with the Vietnam war. The boot is characterized by drains on the inner arc, an aggressive “Panama” sole, and an upper made of two materials, leather and canvas,  to allow for better ventilation. The idea of the boot is that there is no way to prevent water from getting in while walking through the jungle, so the boot has features to allow water to effectively drain.

Jungle Boots can do it all. Once broken in they are even surprisingly easy to run in — I ran 12 miles in these during Air Assault school without an issue. The sole is thick, but doesn’t protrude outside of the profile of your foot; the cemented construction means there is no welt along the outside, allowing for a nimble silhouette. From above, my feet look surprisingly small in these boots. 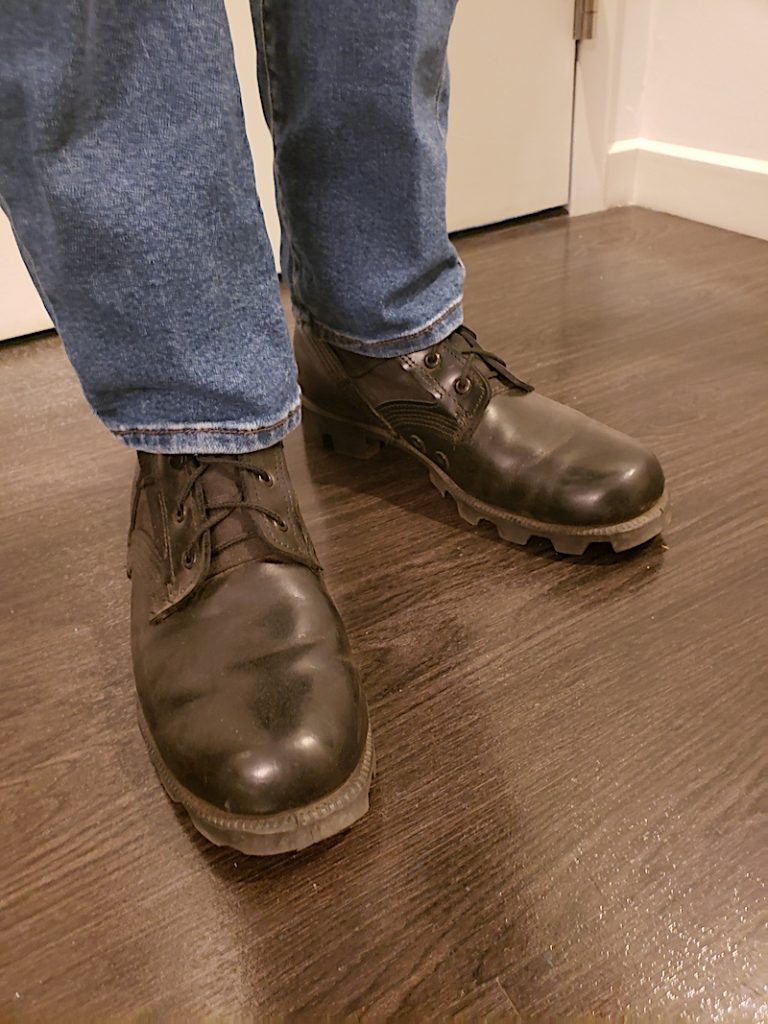 These boots are a great fit for anyone who needs to move fast, like police, EMTs, or other professions with a lot of walking. The sole is also soft enough to be stood in for long periods of time and it’s jobsite compliant with oil, acid, and slip resistant soles — though they’re not static dissipative and do not offer a steel toe. These are a great choice if you are directing traffic, standing guard, or working on your feet.

The breathable upper or water draining features make this a perfect choice for summer, but are even appropriate in cooler months because, well, black leather boots are still pretty hot. The only time I would say they aren’t great is in cold rain. The upper and the inner vents can let in water, which combined with extremely cold weather will freeze your toes.

How to Wear a Jungle Combat Boot

These can be worn a multitude of ways. From punk to cop; from un-tied to laced and bloused.

Under the pants – discreet, almost looks as if you aren’t wearing boots if it weren’t for the aggressive lug pattern 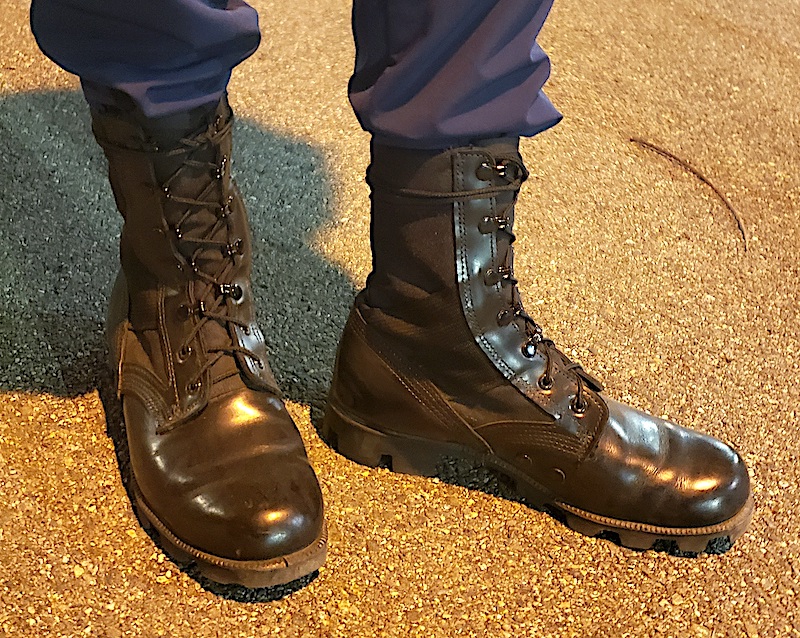 As with all military boots, these will wear a full size smaller than your sneaker size. I have a 9 ¼ so I opted for an 8 ½, but at times they can feel large. If you plan on needing to move fast in them be sure to get them snug, otherwise I think you can get away with a ½ a size smaller if you have thicker socks.

The break-in on these boots is about average. Nothing near what it takes to break in Heritage Red Wings, but more painful than your average cushy work boot. For me, the inner heel caused some rubbing for the first week or so, and the leather on the ankle is stiff for the first 2 weeks.

Being a military issued boot there are many sizes available, typically from 5 to 13 with half-sizes available. The classic jungle boot is all black, with a now nylon upper from the ankle up, but now 3 other variants also exist. The Vietnam era boot is the same, but with the nylon an olive-green color. The modern desert style jungle boot has tan nylon and tan suede. Finally, a fourth, more rare variant, is entirely black leather. The leather on black models is full-grain, but on the desert version of these boots a durable suede is used. 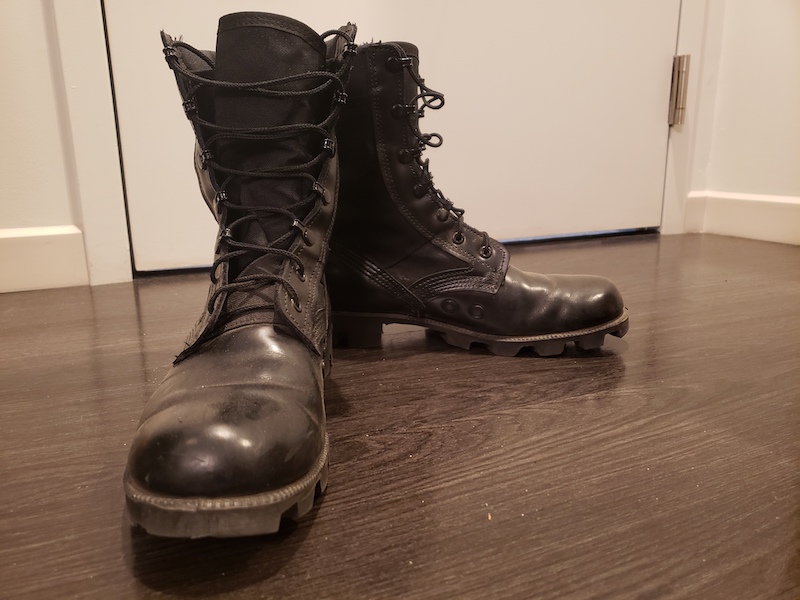 The compound used is softer than the Dainite outsoles typically used on heritage boots, but harder than most modern work boots. This outsole, in the aggressive “Panama” style lug pattern, can wear down moderately quickly. On cement this boot will last about 2 years, but worn in a mixture of environments you should be able to get about 4 years out of these boots. Unfortunately the cemented construction does not allow these to be resoled.

How to Buy a McRae Jungle Boot

Original “Panama-sole” jungle boots are no longer “mil-spec” or made by military contractors for issue–so they have been a bit harder to find. McRae Footwear, from North Carolina, is the only company still producing these in the United States and are my top choice for this kind of boot. McRae actually snatched up some of the original machinery for making these and they follow the original military specifications or “mil-spec.” Some other companies are making similar boots, such as Rothco, but I am unsure how faithful they are to the original specifications and sizing.

An important note is that there are many costume versions of this boot available on the internet and online Army “surplus” websites. These costume versions are made in China, have inconsistent sizing, and are ~$50.00 or below. Do not make the same mistake I did by thinking I was getting a deal, but ending up with a mis-sized boot with a rock-hard sole.

Jungle boots were once much more common; a staple of rebel punk bands, angsty teens in the 1980s and paradoxically, also police. These boots are great in warm weather and for anyone who needs to be nimble on their feet. The main drawbacks being a moderate break in period and the inability to be recrafted. For ~$130.00 these are a great, made in the USA option with a serious military and punk heritage.