Oliver Cabell launched in 2018 with the goal of making shoes that are more honest than the bigger brands. Their schtick is that most brands don’t tell you how much their markups are, but these guys painstakingly list the cost of every item in their production process: packaging, cutting, manufacturing, duties, the lot. (All of which I’ll break down in the price section below.)

Their SB1 boot is their most popular lace up boot; the “SB” stands for service boot, and it’s currently available in five leathers. Interestingly, the company was so invested in being part of the shoemaking process that they bought part of a factory in Spain so that they could control their production and reduce the cost of materials and labor. This, they say, is helping them take the idea of “no middlemen” to the next level.

So, transparency and value are Oliver Cabell’s big foci, as I mentioned in my review of their pretty well priced white sneaker, the Low 1.

Let’s take a closer look at this boot.

This boot is a classic lace up service boot, a name given to leather boots that are relatively low profile and reminiscent of old army boots from the World Wars.

It’s available in a bunch of other leathers but I got mine in black — I don’t have many black boots because it’s easy for them to wind up a little too military-like, but the SB1 is pretty subtle, not too blocky, and relatively tapered at the toe. It’s not bulbous and chromey like a Doc Marten boot, the leather is instead mostly veg tanned, which usually results in a more matte, muted kind of look.

The boot’s got vintage brass eyelets with Italian waxed cotton laces running through them, there’s a gusseted tongue for water resistance, and an anti-slip studded rubber outsole from England, which does a great job of, well, resisting slippage.

So it’s a nice, versatile shoe: low profile, not too bulky, sitting in that no-too-dressy-not-too-casual category. There are a ton of ways to style a boot like this and that’s why we’re seeing a huge increase in this sort of dress boot/work boot hybrid in the industry. (See also Thursday Boots.) 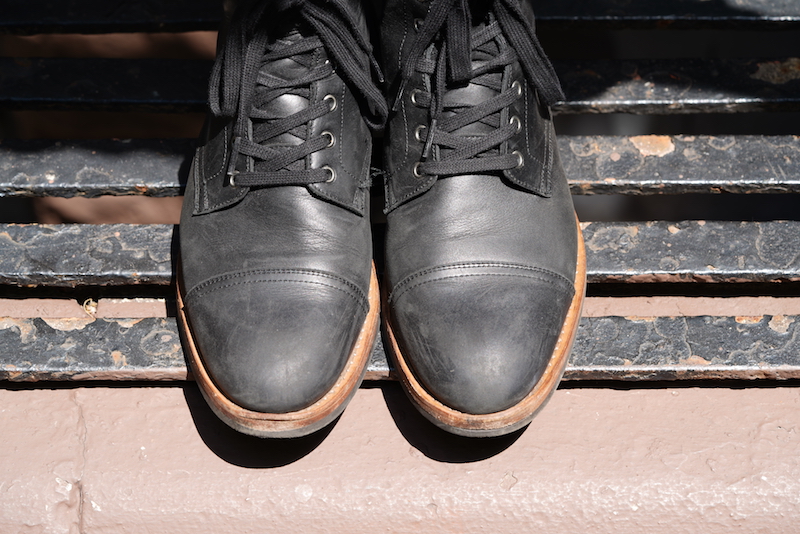 This is full grain, combination tanned pull up leather that’s about 1.5 millimeters thick.

“Full grain” just means it’s made from the top layer of the animal’s hide and that’s what you want for boots that will age well. Pull up, meanwhile, means they contain so much oil and wax, including almond oil and beeswax, that the color changes when you pull on the leather, though that aspect is admittedly a little hard to see in black leather.

Finally, this leather is sometimes called vegetable tanned leather but it’s chrome retanned. In short: vegetable tanning is the way leather’s been made for centuries, it’s tanned with tree bark and such, and typically it makes for stiff but durable leather. But this leather is softened with a quick chrome tanning process, with chrome tanning known for producing a softer if not quite as pretty product.  The goal is to get the best of both worlds. 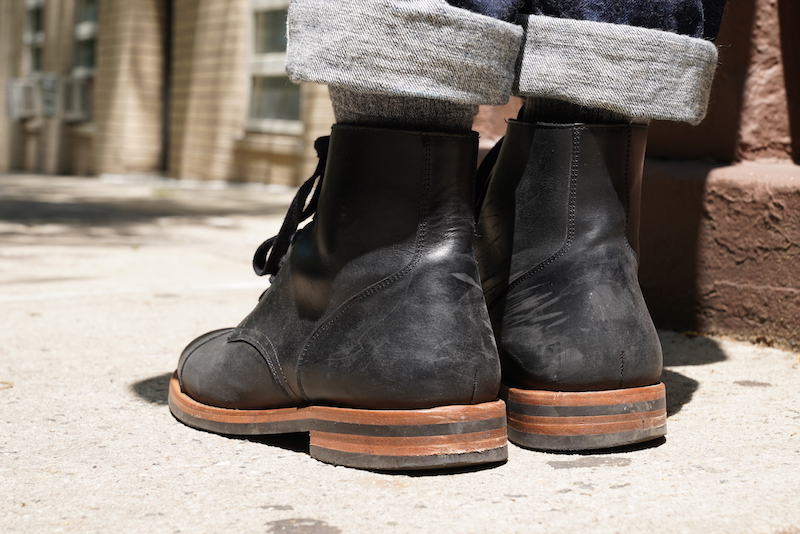 The leather is sourced from a tannery in Albacete, Spain which is also where the shoes are made — even the nails in the heel are Spanish.

It’s a natural leather that’s not very highly treated with protecting sprays or anything like that. You can see there’s no shortage of scuffs here, but I’ve been wearing them for a few weeks and that’s always a midway point between boots looking new and immaculate and worn in but beautiful.

Speaking of scuffs, they sell a leather conditioner that’s just called “Leather Conditioner,” and it’s made from the same oils and waxes the leather is tanned with: beeswax, almond oil, coconut oil, and also olive oil. It cleans, conditions, and softens the leather, but make sure you clean it before conditioning with a spot cleaner to make sure you don’t trap dirt in the leather. 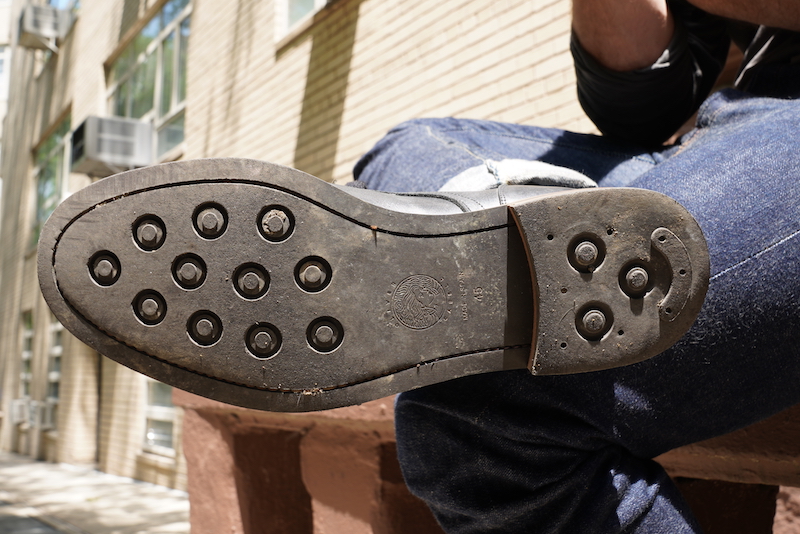 The outsole here is rubber from England, and the layers go rubber outsole, foot forming leather midsole (which is also veg tanned), there’s a steel shank which helps with arch support and stability, then an EVA insole and Italian veg tanned leather for the footbed and lining.

EVA is pretty interesting in boots these days, we wrote a whole article about it here, where we interviewed Oliver Cabell’s CEO. It’s a foam that was traditionally used in sneakers, but it’s getting a second life in 21st century boots because it’s really effective at absorbing shock. Oliver Cabell’s EVA is micro bacterial and made of a blend of rubber and shock-reducing foam.

A couple things to draw your attention to: the stitching that runs through the outsole is misaligned in one boot, see how it comes out from the channel? 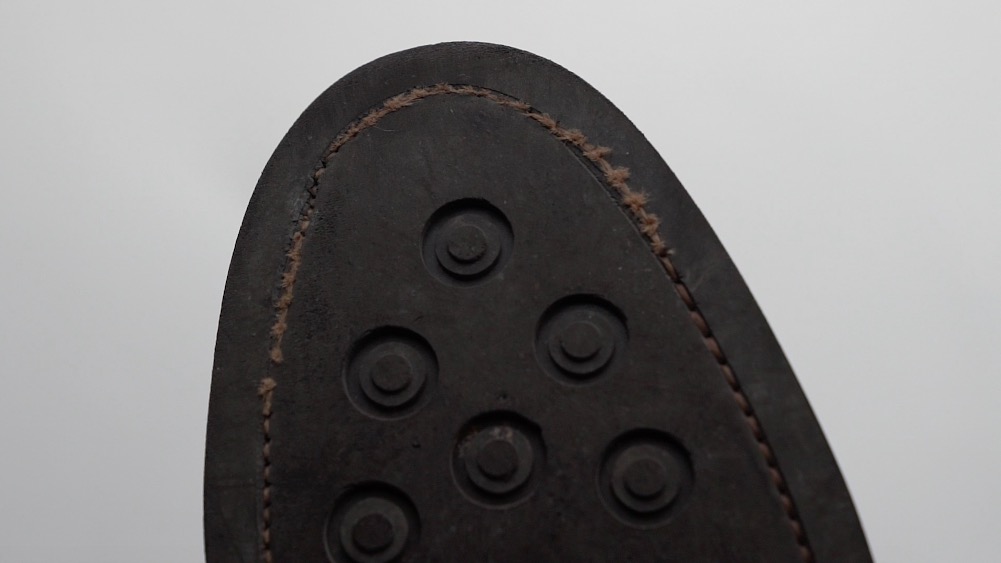 So that’s a bit sloppy. Something that’s cool, though, is there are two types of threads going through the outsole: they’re more blonde at the forefoot and darker at the midfoot. They do that because each thread has different tensile strength, which is a really innovative approach that I’ve never seen before. 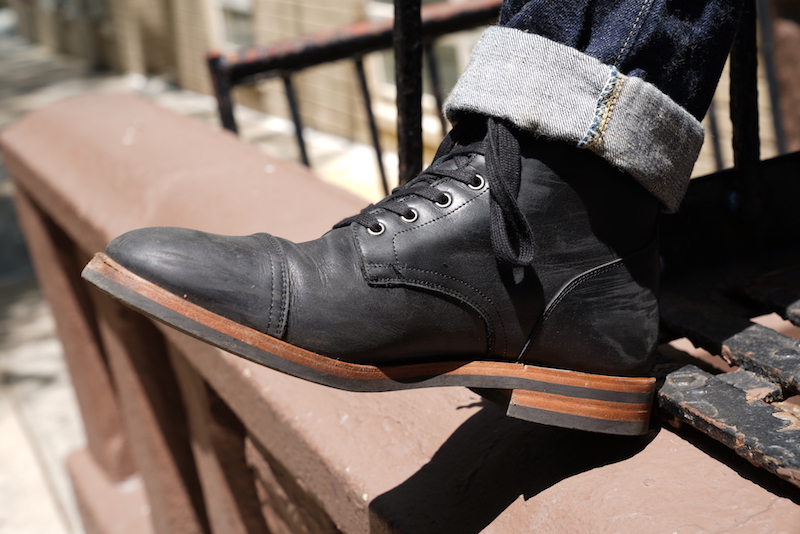 Fortunately, it fits me really well. While the leather took a while to soften up, I have no major complaints with the comfort: the shock absorption’s great, the last contours the foot nicely, the arch support is pretty good, and it’s quite lightweight because it’s not a Goodyear welt.

It took a good few wears before the top of the shaft stopped cutting into my ankle, and while it’ll never be as buttery soft as calfskin leather or something lined with glove leather, it’s feels good, if slightly stiff.

According to Oliver Cabell, the materials cost $120.82. Here’s their price breakdown:

For a resoleable, water resistant boot that’s fully lined, comes with a shank, and is made with full grain leather, that’s a great price. Given they’re a direct to consumer company, it’s to be expected: they don’t have stores, so you save on the product. I’m very impressed with the cost.

Here are your Cliff notes for the SB1: 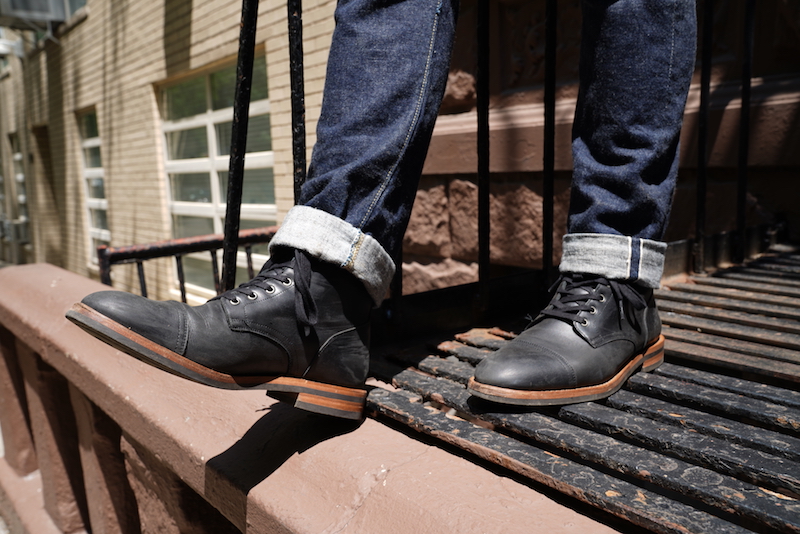 For under $250, these boots are a steal. Resoleable, shock absorbent, full grain leather, fully lined, and very versatile, it’s true some of the stitching was misaligned and there were some loose threads, but look, they’re not $700 boots. If they were, I’d be complaining, but at this price point the product is terrific. It’s hard to say what an old pair will look like but I’m confident these boots will age well and prove a solid return on investment.