In retrospect, Indiana Jones’s actions and reputation as an archeologist do not age well when you consider all the artifacts and ancient tombs he’s destroyed, but the one aspect of the character that did age well is his style.

From his 3-piece Brooks Brother suit to his signature Herbert Johnson fedora, many people look up to this rugged adventurer for style inspiration. In our opinion, his most iconic pieces are his boots.

While only shown on screen for mere minutes in the entire series, fans across the world have gravitated toward the boots that helped Dr. Jones fight Nazis, hunt for treasures, and take down evil cults. This boot is the Alden 405, now lovingly dubbed the Alden Indy Boot.

Alden was founded in Middleborough, Massachusetts in 1884 by Charles H. Alden. New England has a long tradition of shoe and bootmaking, and today Alden is the oldest footwear company in the region. Alden came late in the scene but their embrace of new innovation in the craft helped them become a household name in the area. They further boomed in recognition as the United States expanded westward and the demand for well-made shoes skyrocketed.

Today, the company is still run by the same family and continues to produce high-quality shoes in the USA.

[Learn more: Why Alden Is My Favorite Boot Company]

Why does Indiana Jones wear the Alden Indy Boot?

When production of Raiders of the Last Ark started, the studio’s costume designer, Deborah Nadoolman wanted Harrison Ford, who plays Indiana Jones, to wear the Red Wing 1905. The Red Wing 1905 is a moc-toe style work boot that looks very similar to the Indy boot, but it’s much more voluminous.

However, upon Ford’s insistence, Nadoolman changed the boot to the Alden 405. It is widely believed that Ford wanted his character to wear Aldens because that’s what he wore when he was a carpenter in LA, long before his rise to fame with Star Wars.

Putting some thought into it, it makes a lot of sense that Indiana Jones would wear Alden 405s over the Red Wing 1905. The Red Wing boots are made for manual labor while the Alden 405 is an orthopedic walking boot. A comfortable walking boot is more fitting for an adventurer like Indy! 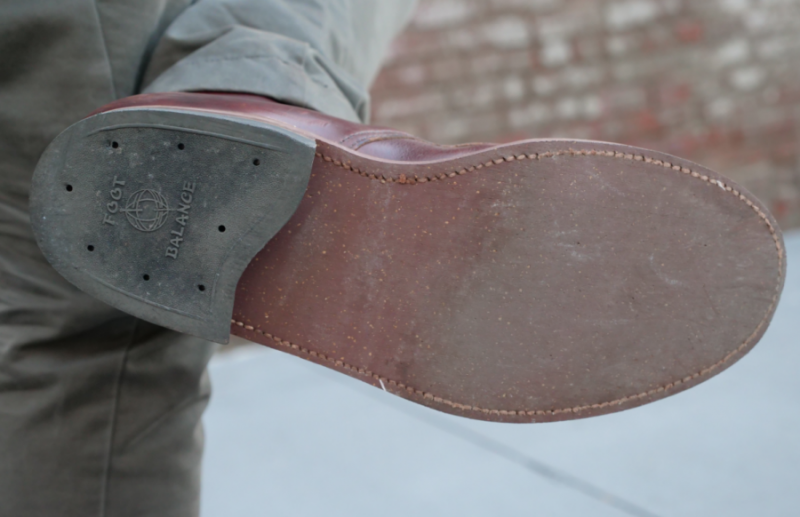 Orthopedic Origins Of The Indy Boot

There are many versions of the iconic Indy boot. Although each one may have a different outsole or use a different type of leather, the core construction and anatomy of the boot remain the same. Every single Alden Indy is a glove-leathered lined, 6-inch, storm welted, orthopedic boot built on the Trubalance last that comes with contrast stitching in the toe front.

The Trubalance last is perfect for an orthopedic boot because it hugs the heel tightly while giving the wearer an ample amount of space in the forefoot. In addition to having a comfortable last, all Indy boots come with a Thomas heel. Thomas heels extend on the inside to add rear and midfoot support medially. Usually, the inside heel is about half an inch longer than the outside. They are excellent for any foot, but especially for folks with excessively pronated feet.

While the original intent of this boot was orthopedic, today Indy boots are very well-regarded stylish boots that look good, can take a beating, and are exceedingly comfortable when the wearer is spending a lot of time on their feet. 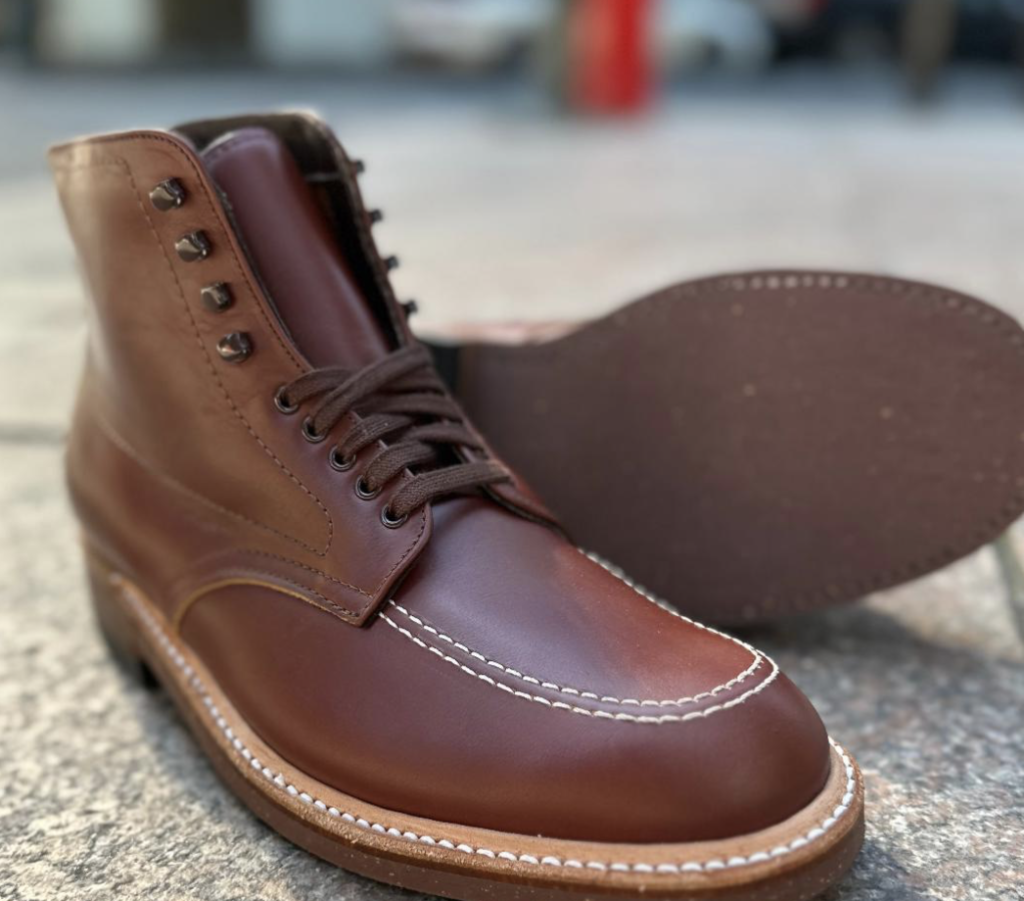 The version that Indiana Jones wore was the Alden 405, also known as the Indy Boot in brown cowhide.

This boot features all of the specifications listed above and has uppers tanned by the world-famous Horween Leather Company. Horween calls the leather used on this boot their Legacy cowhide. It’s a durable leather that has been layered with heavy pigments. Some people dislike this leather because the saturated dyes tend to hides the natural contrast that develops as you wear the boots out. However, seeing that most people wear their Indy boots in a business casual setting or as a way to “dress up” their daily outfits, this is not necessarily a bad thing. If you want to elevate your outfit, you want your shoe to look as sleek and uniform as possible. Having a heavily patinated boot with scuffs and high contrast discoloration would actually “dress down” your outfit — of course, that’s what a lot of folks prefer. This is the original Indy boot that made Alden a household name. Harrison Ford himself requested that he wear the Alden 405 during the filming of the Indiana Jones series.

The Alden 405 Indy Boot is built on the Trubalane last, which means it is very generous on the toes. Alden recommends that you go down half a size down from your Brannock size. For those not in the know, a Brannock device is the standard tool used to determine what size shoe you should try on. If you measure out to be 8.4D on the device, then you should try on the 8D on the Alden 405.

Alden Indys are a superb boot that is getting the spotlight it deserves. It is comfortable, effortlessly cool, and even worthy enough to be worn by Indiana Jones! My personal favorite makeup is the Indy Boot in Milkshake Suede. It is a collaboration with Todd Snyder and it’s the perfect boot for the fall and spring. The creamy white suede goes well with many color pallets works with the most style.

But while the 405 is the classic Indy, you’re more likely to encounter the Alden 403 in the wild. This is made with America’s most popular boot leather, Horween’s Chromexcel. This is the leather of choice for guys who want something durable but also ages like a more rugged boot. For a closer look at the 403, check out our article.

What last are the Alden 405 Indy boots on?

They are on the Trubalance last. You should buy 1/2 size down from your Brannock size.

Who makes the leather for the Alden 405s?

Horween Leather Company makes the leather for this boot.

Are the Alden Indys made in the USA?

What boots did Indiana Jones wear?

Harrison Ford requested that his character wears the Alden 405, now known as the Alden Indy.