Founded in 2016, this is relatively new boot company was started by Mark Albert Barbera after he spent some time selling his own Chelsea boots on an extraordinarily successful Kickstarter campaign. That led to the launch of Mark Albert Boots, where Barbera sells made in America boots directly to consumer at a pretty low price point.

The company’s crowning glory is their Mark Albert Direct program, which is not all that dissimilar to a Kickstarter in that it’s a crowdfunded pre-sale model: You make the order ahead of time, they’re produced in batches, and this lets them keep the costs very low. So it has some similarities with Beckett Simonon and John Doe Shoes, except that (again), these shoes are made in America.

The company sells a variety of heritage type footwear now, in addition to some more modern shoes with sneaker like soles, but I’m looking at one of his most popular boots: the Outrider. I’ve been wearing these for a few weeks and even took them on a trip to Wales with my family. Here’s what I thought.

This is the Outrider in what they call “waxy distressed leather,” a pretty grungey, oil tanned, pull up beauty that really wants you to kick it around and beat it up.

Like most of Mark Albert’s boots, it has a vaguely vintage military look to it, but it has an ever so slightly lower profile than 6-inch heritage boots like their Uptown boot. This one is about 5 inches tall — almost chukka height — with 5 pairs of eyelets and a pair of speed hooks, very cool rawhide laces and a grippy Vibram outsole. The sole is secured to the upper with an extra water resistant 360-degree Goodyear welt.

Now this boot is available in a couple of leathers — subject to availability — but this waxy distressed leather is a real treat. 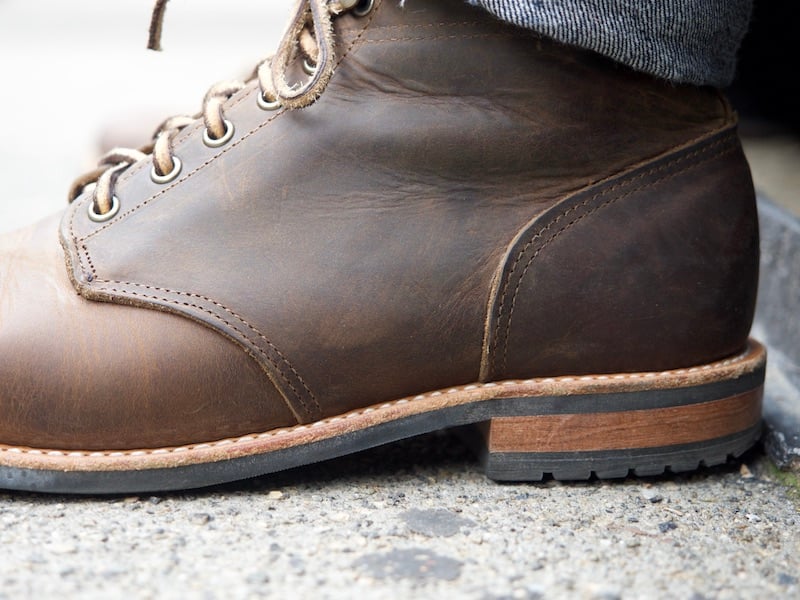 This leather used to be supplied by Wisconsin’s Seidel Tannery but it now comes from Tasman Tannery in Maine, who use the same tannage but it’s a bit heavier and oilier than the leather they used to use from Seidel.

It’s a 5.5 ounce American tanned leather that’s very oily and supple and waxy. It’s hot stuffed with different oils and different colored waxes, like tan and brown, and there are a lot of highs and lows in the color as you wear it. That’s what people refer to when they talk about pull up leather: an oily leather with undulating colors throughout. 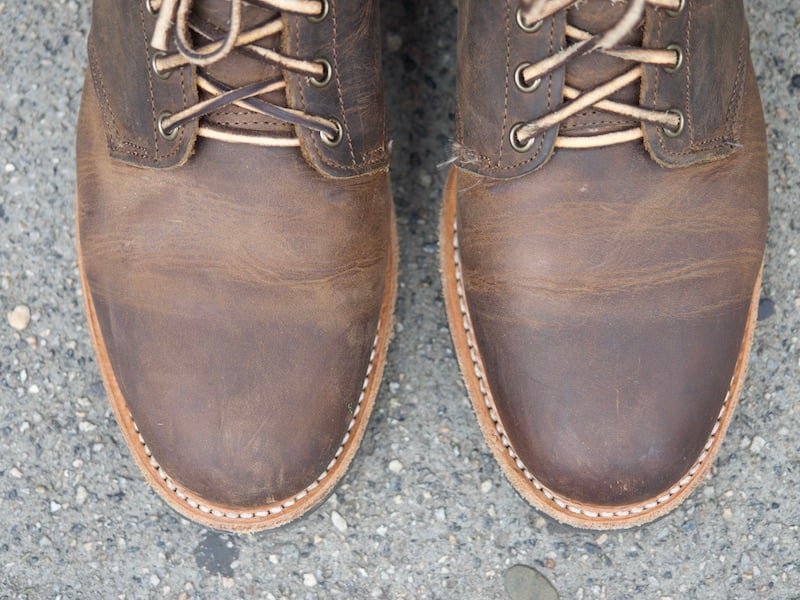 One of the biggest potential gripes with the boot is the fact that it’s so oily that the color changes a lot around the toe break, where the leather is bending all day and you’re pushing the oil around. Barbera says there’s a fix, though.

Now this leather is so oily that it really doesn’t need much conditioning at all. It’ a boot that is meant to be beat up, scuffed, and full of character. But if you really are bothered by the color inconsistencies, maybe you want it to look a bit dressier for a Friday night, Barbera told me that a good conditioner like Smith’s Leather Balm or Blackrock’s Leather N Rich will return it to the original color. Well, it’ll actually be slightly darker, but it’ll be more consistent nonetheless. 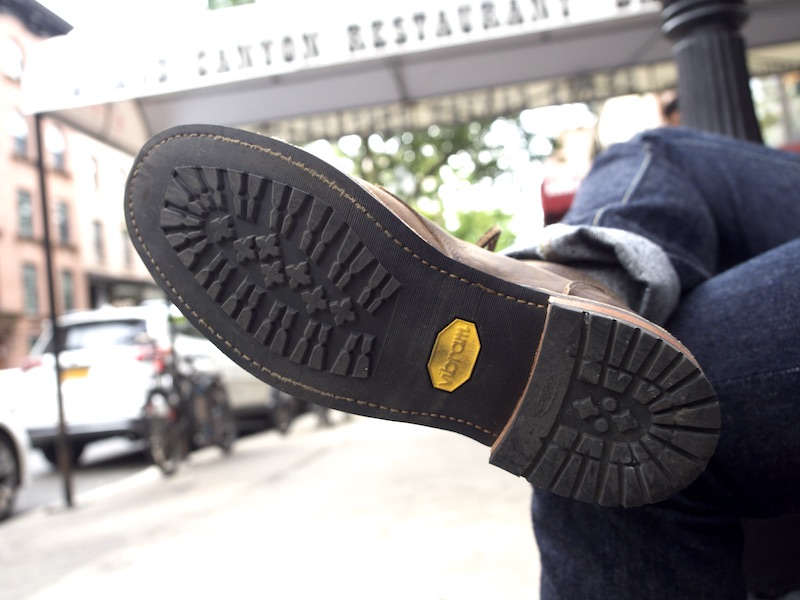 This is a lovely Vibram 430 sole, which is famously tough and provides fantastic grip while still being nice and flat when viewed from the side. (Well, mostly — it’s still quite luggy around the heel, but what are you gonna do.) The heel also has some stacked leather in it and there’s a solid steel shank in the shoe for arch support and to make sure the boot maintains its shape for as long as possible.

That outsole is 18 iron, 10 millimeters thick, and Mark Albert sews directly through the outsole. This is a 360-degree flat welt Goodyear welt construction, which means it’s very water resistant and easy to resole. For the insole, they use a combination of poron and 5- or 6-ounce full grain leather, then they cement that on top before the boot is put together.

They do that because poron naturally breaks down over time, so it’s meant to give you the comfort of the poron but add some longevity to it. This such an unusual construction method that Barbera says he’s pretty sure he’s the only one who does it.

[Related: 6 Boot Soles You Should Know About] 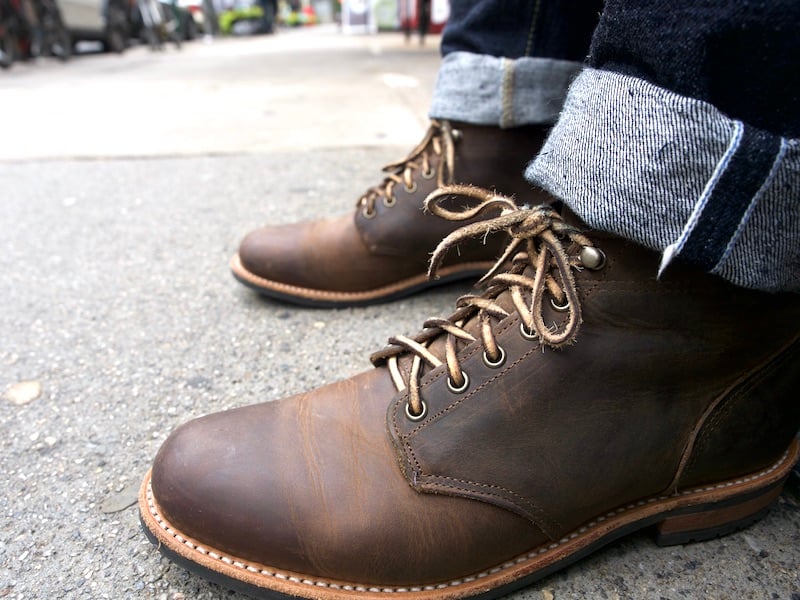 Order a half size down. My true size is 11.5, I got an 11, and it fit me really well. They come in D and EE widths, which is more variety than most companies offer, but the sizes only go up to 13 which might be a bummer for sasquatches.

And you know what? They’re really damn comfortable. The poron insole offers great shock absorption and the added leather insole and the shank offers exceptional longevity — and the arch support is terrific.

More than that, the shoe just contours the foot really well. It’s an odd thing to say, but it’s a vey foot-shaped boot. (That shouldn’t be unusual, but it is.) My arch us supported, the boot contours the foot well, the shock absorption is great — I’ve got no complaints.

[Compare with another inexpensive made to order boot company: John Doe Shoes] 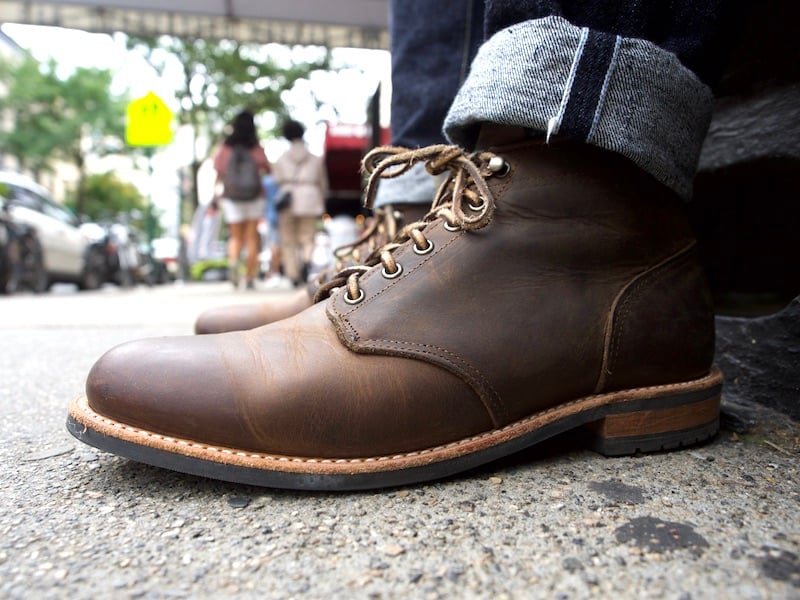 One of the ways Mark Albert stands out in the market is by this made to order approach, which really keeps costs down.

The downside is that you’ll probably have to wait 4 to 8 weeks to get them once you’ve ordered them.

I got pretty lucky, I only got mine in a couple of weeks. But in general, depending on whether they’re having a sale, you can expect a month or two to get these.

That said, I think they often have boots in stock, so you might get lucky if they have your size and style. Just check out their website.

“I’m very confident that these go toe to toe with Red Wing, and you’re looking at 259 versus 325 dollars,” Barbera told me. “When you peel away retail margins, it allows you to offer a much better price to the consumer. With the high cost of labor in the US, if you want a quality pair of boots under 400 dollars, you have to sell direct to consumer. So that’s what we set out to do — before this I was selling to retailers and most of my stuff was retailing around 385 dollars. I wouldn’t have been able to afford a pair of my own boots at that point!” 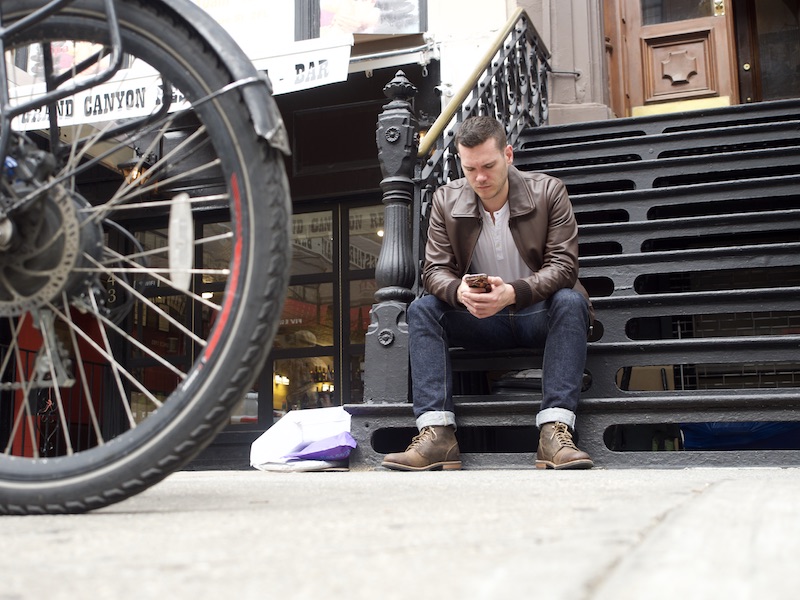 These are superb boots for the price point. The main downsides are the month-plus wait time and the fact that it got some loose threads over a few weeks of wear.

Still, they’re under $300, they’re made in America with American leather, they’re super comfortable, resoleable, hand stitched, and available in a bunch of leathers if you’re not crazy about that waxy pull up leather.

If you’re patient, they’re worth the wait.