So, you’re serious about boots. You’re looking for the highest quality, the ones that will really last, and it’s got you asking the real questions like, “I want these boots to last ten years, will I be able to resole them?”

We get it, and is resoleability (a word we’re choosing to believe exists) is a priority for you, you’ve likely narrowed your options down to two types of construction: Blake Rapid and Goodyear welt.

Before you decide, you’re going to need to know a few terms.

Anatomy of a Boot Sole

This isn’t a “layer,” but the midsole is usually where you’ll find the shank, the piece of hard material (usually steel) that supports your arch and maintains the integrity of the shoe’s shape. There are also boots with two midsoles, but look, we’re trying to keep things simple. These three layers are usually what you’ll find.

These three layers need to be attached together, then affixed to the boot’s upper, which is usually made of leather. (Sometimes it’s wool or something else, but you get the picture. Stop derailing the discussion.)

The cheapest way to attach the upper to an outsole, of course, is to just glue it. In shoe parlance, this is called “cementing,” and it’s what you’ll find on your average sneaker like the Converse Chuck Taylor. This method works fine enough gummy soles and even some boots, but ultimately, it condemns the shoe to a short lifespan. Once the sole starts to peel away from the upper, that’s it — it can’t be resoled.

So You Want Resoleable Shoes

A much more durable solution is to stitch all the parts together in such a fashion that it can be resoled when the time comes.

Straightforward as that seems, it leads to a tiny problem — in fact, hundreds of tiny problems. Water can seep in through the little holes in the leather where the stitches perforate your boot. And no one wants to pay premium prices for wet feet. (At least, not when you want outdoorsy boots.)

So how do the best boots guarantee longevity while keeping your toes dry? It might seem like a tall order, but this is where the top two forms of resoleable, water resistant boot construction come into play: the Blake rapid stitch and the Goodyear Welt. 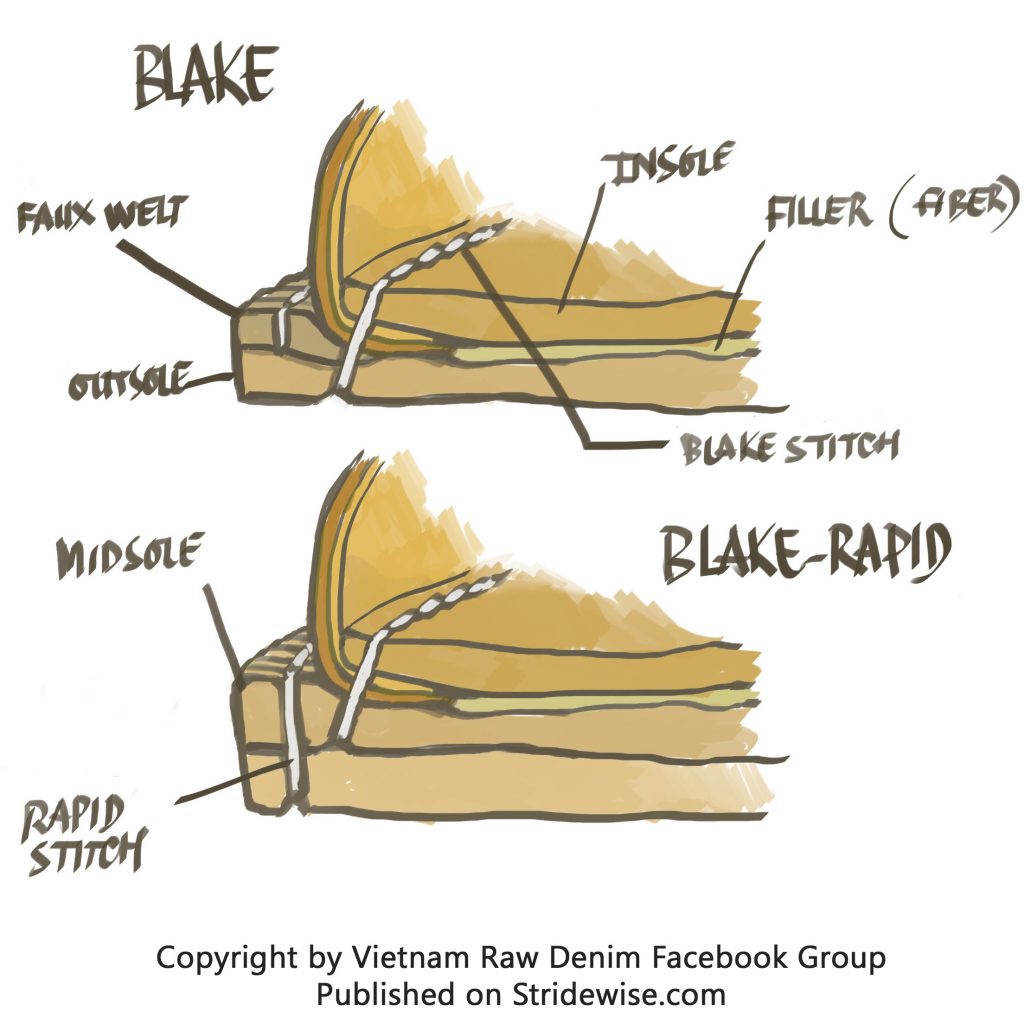 Both use the specialized Blake machine, named for its American inventor Lyman Reed Blake, to stitch through the layers of midsole and outsole. Because the Blake machine allows a cobbler to stitch from the inside of the shoe it makes for a slimmer, more streamlined shoe, with the upper nestled right along the edge of the sole and no added bulk around the perimeter.

So what’s the difference with Blake rapid?

“Blake stitching uses a one layer outsole, meaning there is no true midsole,” says Brad Day, CEO of Helm Boots, the craft footwear company out of Austin, TX. “The needle marks from Blake stitch can be seen on the outsole and [so it] doesn’t provide much protection from water. Blake Rapid, on the other hand, utilizes a separate midsole and outsole which are [stitched] together, making them more water resistant.”

The insole and upper are attached to the midsole, then the midsole is stitched (again, using the Blake machine) to the upper, where it acts as a buffer for water seepage. By stitching both the insole and outsole to the midsole, the Blake rapid stitch gets around the problem of the simple Blake stitch. It’s not the kind of construction designed to keep you dry when slogging through the mud, but it will hold up if you get caught in a surprise storm.

How easy is it to resole? It depends. If you have access to a cobbler with a Blake machine, which is the only way it can be done, it’s an easy job. Here in New York City, it’s not a big deal but it all depends where you live.

One last added bonus of this stitch?

“Blake Rapid tend[s] to be a little lighter and easier to break in,” says Day. Since there’s no added bulk, the outsole is more flexible right out of the box. It won’t negate the process of breaking in a tough leather, but it may make the process a little more manageable.

[Related: Our breakdown of the Goodyear welt vs Blake vs Cemented construction]

More worried about the waterproofness of your boot than the aesthetics? The Goodyear welt has got you covered. Invented by Charles Goodyear Jr. in 1869, the stitch so iconic it spawned an entire subreddit (check ‘em out at r/goodyearwelt) is widely considered the gold standard of boot construction in part because it innovated a clever solution to the seeping water problem: the welt.

A welt is simply a strip of canvas (or leather, linen, or synthetic fiber) that runs around the edge of the shoe’s sole. First the welt is sewn to the upper and insole, then the outsole is stitched to the welt, which binds everything together while keeping it very water resistant. (It’s not waterproof like the gum boots you’d wear if you’re standing in a pond fishing all day, but it’s definitely enough to get you through a storm.)

The ultimate form is the 360-degree Goodyear welt, which runs all the way around the perimeter of the shoe, but there are plenty of well-loved boots out there that have a 270-degree welt, which offers a bit of a slimmer profile because it doesn’t have the blocky stitching around the heel. The difference is mostly aesthetic, but does make the boot a teensy bit less waterproof.

There’s no clear winner in this fight.

Helm uses the Blake Rapid stitch in all their boots, but when asked, Day confirmed: “There aren’t really any drawbacks vs. the Goodyear welt. Both are very good construction methods and people have been arguing over them for longer than I’ve been around.”

Any cobbler can resole a Goodyear welt, but they’ll need a Blake machine to resole a Blake Rapid. There’s a perfectly good chance a cobbler will have one, but you’ll need to call ahead to confirm.

“People should be confident that they are getting a quality product if they are buying a shoe or boot that uses any of these methods,” he adds. “But they should also make sure they pay attention to the quality of materials that are being used in construction.  Just because someone uses a Blake Rapid or Goodyear Welt, doesn’t mean that they are using quality leather hides, outsoles, and other materials.”

If you’re looking for a more streamlined aesthetic and a lighter shoe, you’ll probably want a Blake Rapid. For maximum water resistance, a Goodyear welt is the way to go. Don’t care much about either extreme? Both are undeniable hallmarks of quality boots, and will keep your feet dry for as long as you want to keep resoling them.