“How are Thursday boots made?”

It’s a question we hear a lot, so I decided to fly down to León, Mexico, to find out.

This is the same trip where I spent an extended period of time at Lefarc Tannery, the main supplier of Thursday’s leather — click that link if you’d like an inside tour.

But I wanted to see what happens after the leather is created and sent to Thursday’s factory, where it becomes the boots that millions of people around the world enjoy today.

The company’s Directory of Production, Tony Thomas, kindly gave me a tour showing me the over-one-hundred-steps it takes to make a pair of their Tobacco Captain boots, their most popular product at the time. We did our best to edit everything into a six-minute video.

He told me how they first choose which materials go into a boot:

It starts with ideation, which a lot of times comes from customer feedback. We think about what we want, about the use case, and what we’re excited to make. After we draft a design, we go into prototyping and sampling. Either we are working with an existing last, or we are prototyping and developing our own last and really refining every single detail, whether it be the last, the outsole, the welt extension.

Once they have a good idea about what they are building, they gather all the materials, pre-check them before they go to the factory partners, and have a sample built.

“We get the sample back and try and be as critical as possible on it and decide what to do for the next round,” says Walsh. Once the model is approved for production, things kick into gear at the factory. 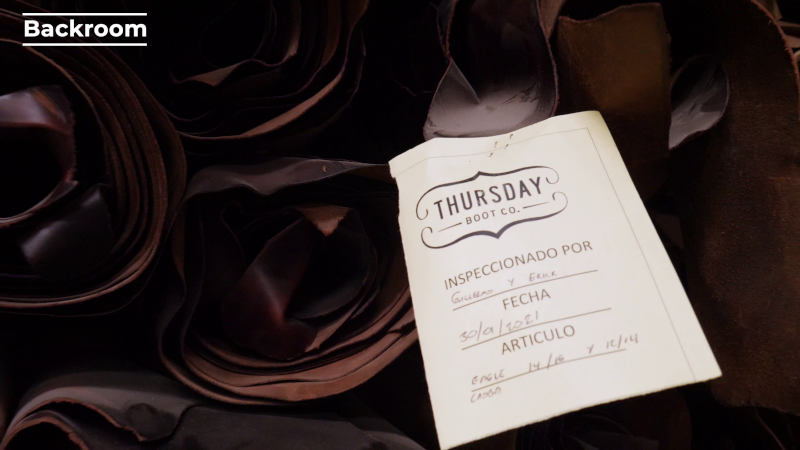 After the samples have passed inspection and all the materials are checked out, Thursday is ready to order all of the components and send them to their factories’ backrooms where they wait for assembly.

I got to see the Rugged & Resilient Tobacco leather, which I happened to be wearing at the time on my President boots. I’ve worn my boots very hard and the leather has held up amazingly, so it was very cool to see it in its raw form.

“What makes it a ‘Rugged’ leather is that it’s buffed on the grain, then the waxes and oils are introduced to the grain to give it that kind of pull-up effect to it,” Thomas explains.

The grain is the topmost part of the animal hide, usually the visible part of the hide, and by buffing it the leather acquires a very slight nap, like nubuck leather. The waxes and oils work as a natural defense against the elements adding water resistance and durability, and all those oils produce gorgeous variations in color throughout the leather — something called a pull-up effect. 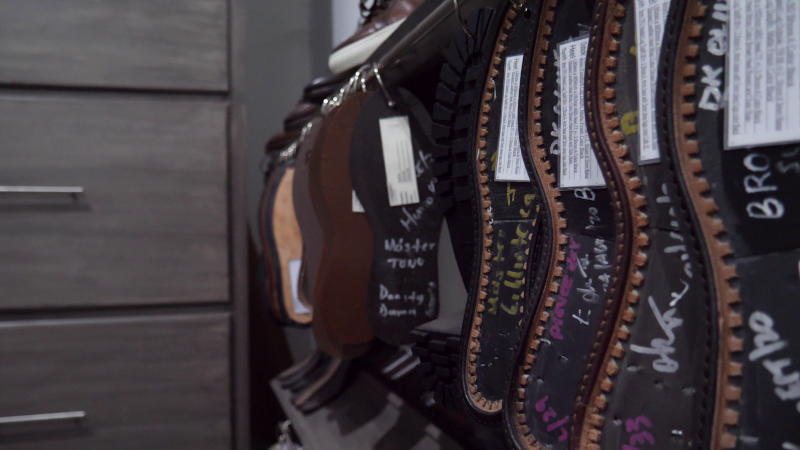 There were also towering piles of soles in the back room, and the one we were focusing on was the relatively new Storm King lug. The Storm King is an extra grippy, functional, and tall sole that you can grab on the Tobacco Captain and the Whiskey Captain (along with several other models) and it’s made from vulcanized rubber. (Vulcanized rubber has been hardened with heat and sulfur; pretty much all of your rubber soles will be vulcanized.)

The last vital part of a Goodyear welted boot is the welts, which are attached to the upper and the sole — neither are attached to each other, and this process makes a boot resoleable. Thursday uses vegetable-tanned leather welts, which is very unusual at their price point — most sub-200 dollar boots with Goodyear welts, if you can find them, are made with plastic welts that mean the shoe can only be resoled once or  maybe twice. Having a strong, veg tan leather for the welt lengthens the lifespan of the boot. 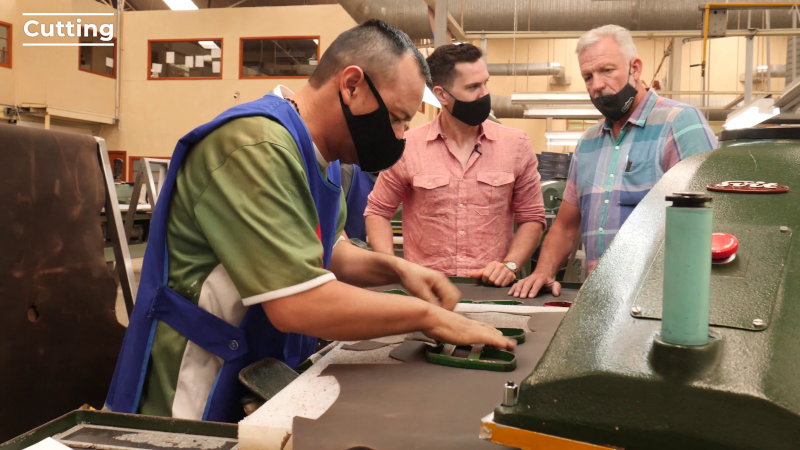 This refers to the leather selection process: the hide is inspected for severe defects like scratches or blemishes, and the craftsman avoids them when cutting with his dies.

“We work with the skins that have been preselected and have all the scars and scratches indicated, so [our bootmaker] is cutting around that area,” says Thomas. 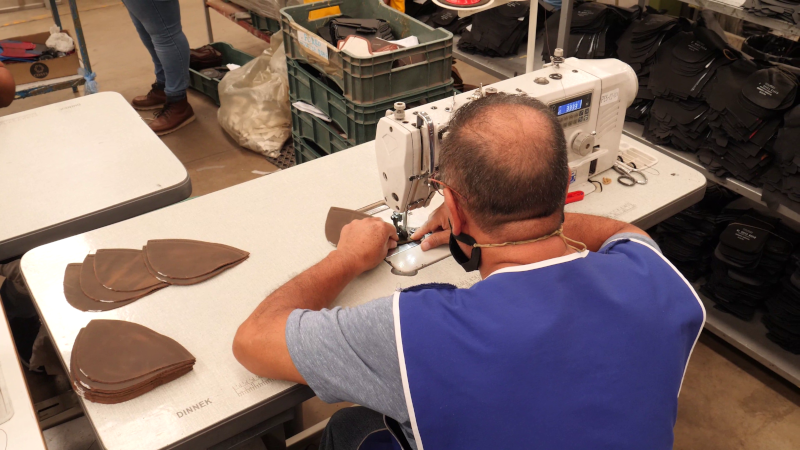 Before the leather pieces are stitched together into something that looks like a boot, they have to undergo the “preliminary operations.”

Bootmakers will shave leather down at the edges to improve the finish, make less-bulky seams for comfort, and make it easier to stitch together; that’s skiving. Perforation is when bootmakers poke holes in the leather for decoration, like Thursday’s Wingtips.

This is also the pre-stitching process, when the decorative stitching occurs. Yes, some stitching is just for looks.

“What you can see here is he’s putting a ‘deco’ stitch on the (Captain boot’s) cap toe, so there’s really no function on that,” he notes. The cap toe is actually stitched on at a later point.

In fact, the popular Captain boot‘s toe cap is decorative: it’s two pieces of leather stitched together, but at their seams: the toe doesn’t have two layers of leather over it. 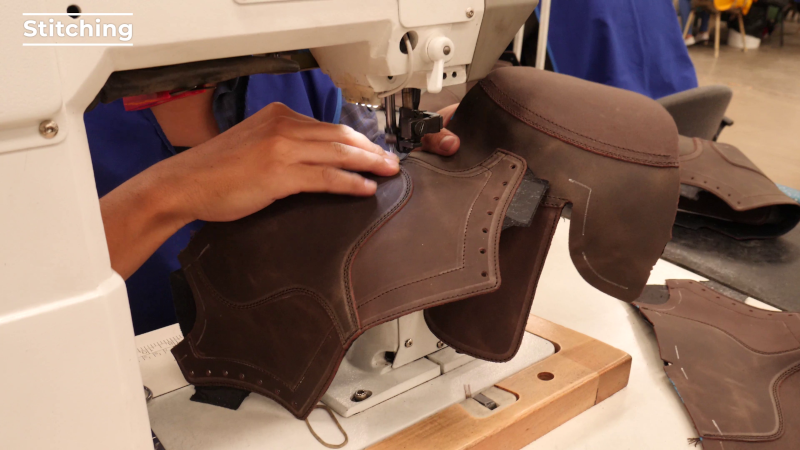 Boots are made up of individual pieces of leather; the most common you’ll hear about in boots like these are the welts, vamps, quarters, toecap, and counters. I’ve mentioned the welts are used to hold the uppers to soles; the vamps are basically the front part of the boot from the toe to the quarter, which is generally the back part of the boot that is attached to the vamp in front. The counter covers the heel.

These are the “heavy duty” parts that require thick stitching because they take a lot of the stress as we walk. Eventually, all of these pieces (except the welt) form the upper once everything is stitched together. 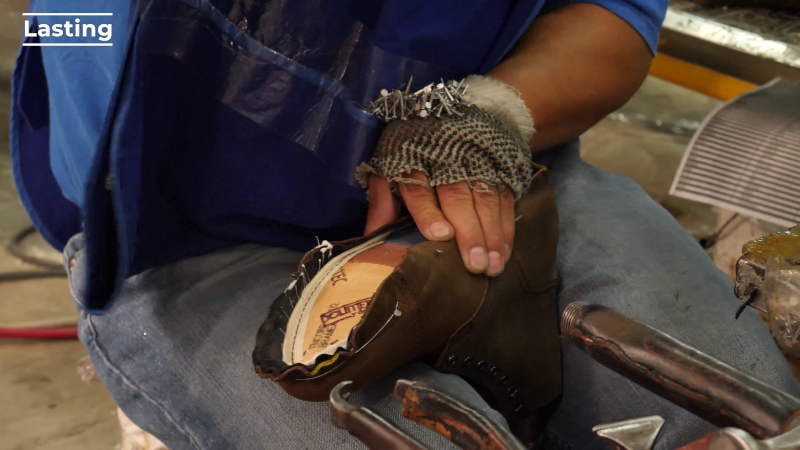 Lasts are the molds that bootmakers use as templates to make boots. They have similar dimensions to the human foot but they vary considerably among brands and models: some want narrower toes, some prioritize fashion over comfort (which is totally acceptable to a lot of folks), some want lots of room for toes to splay, and so on.

In the lasting operation, there are three primary operations: the toe lasting, side lasting, and heel lasting. Those all are shaping the upper around the shape of a last.

From there they start to shape the bottom of the boot to accept the cork filler, midsole, and outsole. 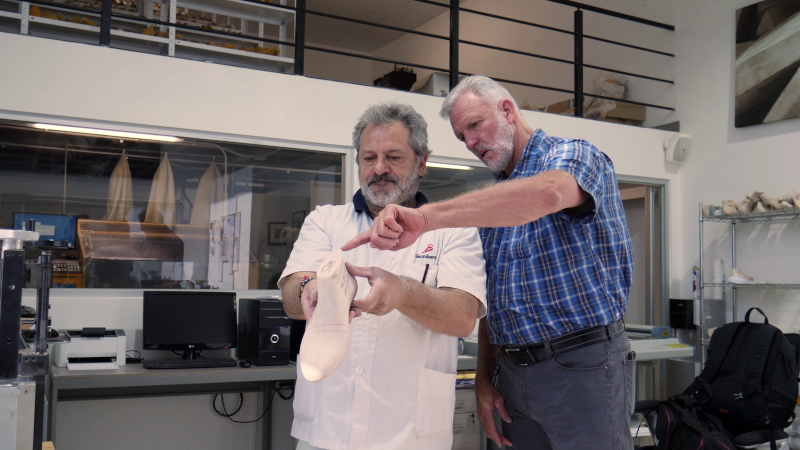 If you’ve been into boots or footwear for a while, you’ll know one of the biggest challenges for companies seems to be consistent quality control (QC).

To make sure almost every boot that hits the market is up to par, Thursday’s QC process is exacting to say the least.

“The QC process and final stage of the boot’s production is called a military standard, in which we select a portion of the lot that the factory has produced and we either approve that lot or disapprove that lot, (in which case) the whole lot has to go back and redo the whole lot,” says Thomas. “We are intricately involved in the process, looking at all the separate stages with our QC team working with the factory’s QC teams to make sure the quality of the product is tip-top.”

Let’s say they make a hundred boots and they randomly check ten; if one of those is bad, the entire batch needs to be remade.

Even though I own a ton of boots, and thought I had a pretty good idea of how they’re made, I still learned an extraordinary amount on this trip to Thursday’s factory.

After wearing a pair of Captains for over two years now, I have even greater respect for what these guys do and the effort that goes into making a pair of boots that last a long time, feel good, and can be resoled. I’m sincerely grateful to Tony Thomas and his team for letting me tag along on this factory tour.