Summer’s over, and you head to your closet to bring your favorite waxed canvas jacket back into your rotation.

But something’s off. It’s lost some of its sheen since you purchased it and, lo and behold, it doesn’t repel as much water as it used to either.

That’s when you realized there’s more to waxed jackets than the timeless, rugged outdoorsman aesthetic: the wax also has functional benefits.

Thankfully, you don’t have to buy a new one. You can bring back the water resistant properties of your canvas jacket with a can of wax and a bit of elbow grease.

Today, we’re going to talk about how to re-wax your waxed canvas jacket (it’s quite a straightforward process actually) and you’re also going to learn how waxed canvas first came to be, what kinds of waxes you can use, and when you should re-wax your jacket.

The History of Waxed Canvas

Before synthetic waterproof fabrics were invented during the late 20th century, waxed canvas was the fabric of choice for fishermen, hunters, and explorers for keeping water out of their bodies and gear.

Sailors as early as the 16th century found out that wet sails caught the wind better, but water made the sails too heavy. They were then able to figure out that replacing the water with fish oil did the trick without the weight penalty. Eventually they began to make their work clothing out of waxed canvas fabric to better protect themselves from the elements as well.

Later in the 19th century, a by-product of petroleum called paraffin wax was introduced, which improved the water and wind resistance of waxed canvas without being too stiff. The fabric also didn’t turn yellow compared to organic oils like linseed and fish oil.

The Benefits of Waxed Jackets

We wrote a whole article outlining the benefits of waxed jackets, but for starters, they’re typically already made from canvas. Canvas is a very densely woven cotton that’s resistant to tearing and abrasion, making it ideal for more rugged wear. That’s why you’ll often see it on hunting jackets and outerwear made for braving the outdoors.

Applying a layer of wax adds water resistance. Cotton, for all its wonderfulness, absorbs a lot of water. Think of the last time you tried drying your soaking wet jeans — cotton absorbs. Fortunately, wax is hydrophobic, which is a reason why it’s also popular for making suede boots more resistant to water and stains. The wax creates a barrier around the fabric that water beads off of.

Waxed cotton also looks damn cool. Sometimes called a “patina cheat code,” it quickly forms creases and slight color permutations that make the jacket look worn in, but in an attractive way. That’s the beauty of canvas, leather, and other heritage apparel: it looks better as it ages, and waxing your cotton helps to speed up the process and bring a new dimension to your jacket’s aesthetic.

Maybe you don’t prioritize aesthetics, but like we said: it also keeps the water off. Win/win.

Supplies for Waxing a Jacket

You’re gonna need the following for this project:

You might feel like a heat gun is overkill, but as you can see in our video, it makes the process much simpler and makes it easier to create uniformly smooth — and effective — coating of wax. 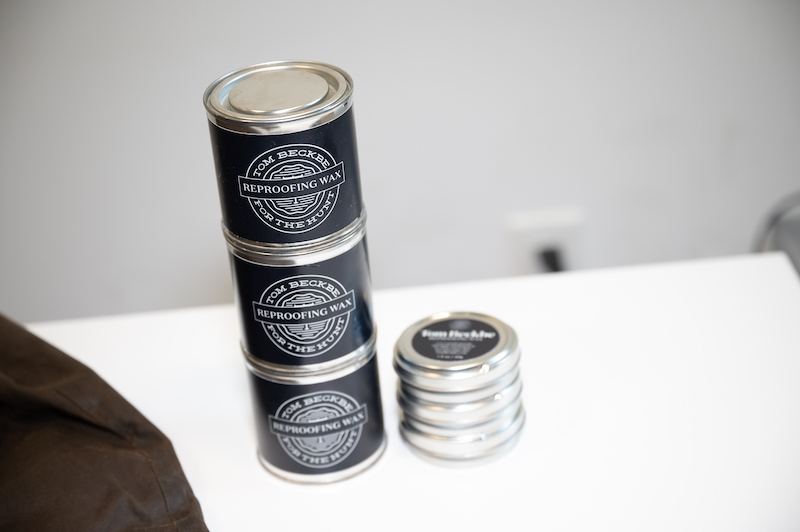 Before we get into the types of wax typically used in re-waxing waxed canvas, let’s talk first about the two forms of wax available in the market today for these purposes: canned wax and bar wax.

As the name implies, the wax is in a can and you can either use a heat gun or submerge the can in hot water to melt the wax.

Bar wax, on the other hand, looks like a soap bar and you apply it by heating the bar first then rubbing the wet wax onto the jacket.

The types of wax can generally be categorized as either petroleum-based such as paraffin or organic ones like beeswax and plant-based blends.

Take note of these when buying wax especially if you’re concerned about health hazards.

We’ve discussed briefly about paraffin wax in a previous section, and it’s a staple for re-waxing waxed canvas. It is a by-product of the petroleum industry and so it can be toxic when heated too much. Make sure there’s enough ventilation in your work area when using it.

Tom Beckbe, Filson and Barbour sell waxes for their jackets made of paraffin and generally recommend it only for their respective waxed products.

Organic wax for waterproofing is usually a blend of beeswax and plant-based waxes and oils, and these tend to be non-toxic.

Brands often tend to keep their formula a secret, though two popular brands out there are Martexin and Otter Wax. 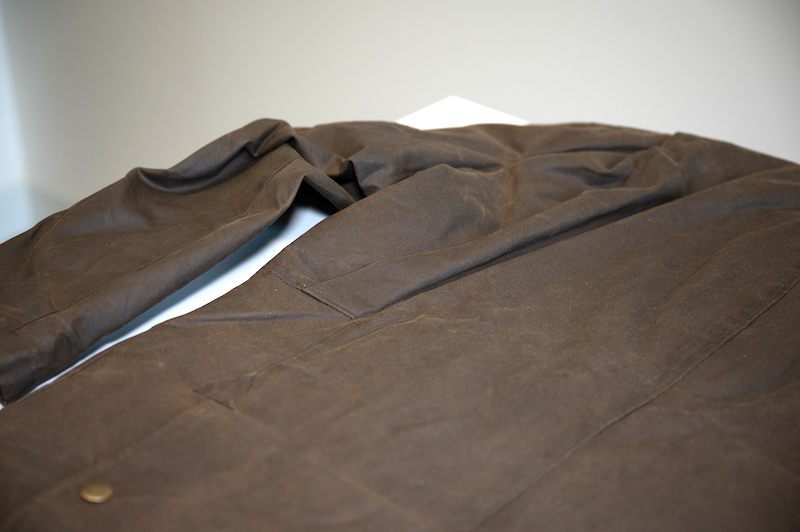 When should you re-wax your jacket?

Like conditioning your leather boots, re-waxing depends on how often you use your jacket.

What’s important is to notice if your jacket is not repelling water anymore, which is the biggest sign that you should re-wax it already.

Thankfully there are also visual indicators. The areas where the wax has worn out tend to appear lighter compared to the areas that still have enough wax in them. These areas also often move more, such as the sleeve, the hem, the elbow, and under the arms. If you throw some water on the elbow and your skin gets wet, it’s a sign to start waxing.

How to Wax Your Jacket

There are four general steps when re-waxing your canvas jacket, which

Although many tell you not to clean waxed jackets at all, this is an important step, as small bits of dirt can actually damage the canvas fabric over time. If left on the jacket, they’ll get trapped under the wax and potentially degrade the stitching and fabric over time.

However, soaps and detergents are generally not recommended when cleaning waxed canvas, nor is a washing machine since those can agitate the wax off of your jacket.

So to remove dirt and bad odors, the best way to clean your jacket is to use a brush to brush off the dirt, then gently clean the surface with a damp cloth or wet sponge, ideally with some canvas cleaner. Just don’t use detergent.

The idea is not to get the fabric soaked in water, just get it relatively clean and let it dry before moving onto the next step.

[Learn more: How to Clean a Waxed Jacket]

If you’re using canned wax, you can either place the can on a bowl of hot water first or you can use a heat gun to melt the wax.

If you’re using bar wax, heat one side only while you hold it on the other. This makes it much easier to spread compared to a solid bar where you’ll be applying more force. 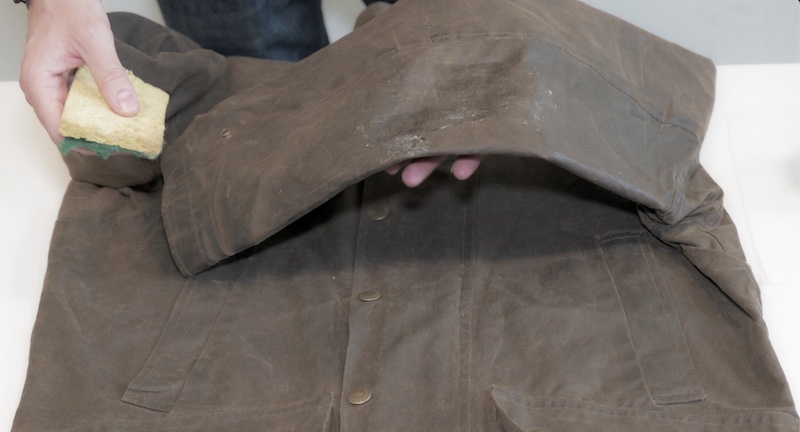 If you’re using canned wax, dip your sponge or towel in the wax and rub that on the fabric. You can either go in circles or linear strokes.

If you’re using bar wax, just rub it onto the fabric. Don’t heat too much of the bar so you still have a firm and comfortable grip on it.

After you apply the wax on the jacket, immediately follow it up with the heat gun or hair dryer so the wax absorbs faster and spreads more uniformly.

Excess wax will tend to be unabsorbed after applying heat and you can either spread it to other areas or blot it out. This is also a sign that you should move on to other areas.

Notice the areas that still have a wet sheen after heating. Those areas have excess wax. 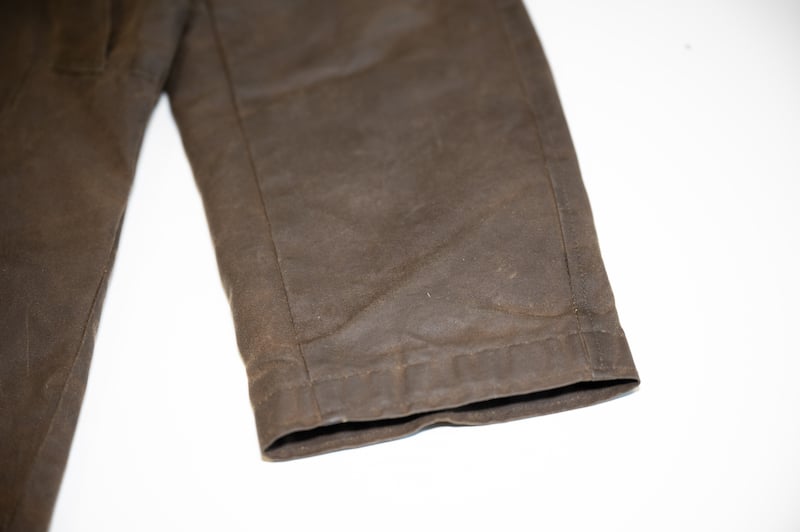 Once you’re done re-waxing your jacket, it will still be slightly damp to the touch and will still have a wet look to it.

Before you use it right away, let it hang dry overnight first to let the wax set and bring back the water repellency. Feel free to hang it in your bathroom or outside. 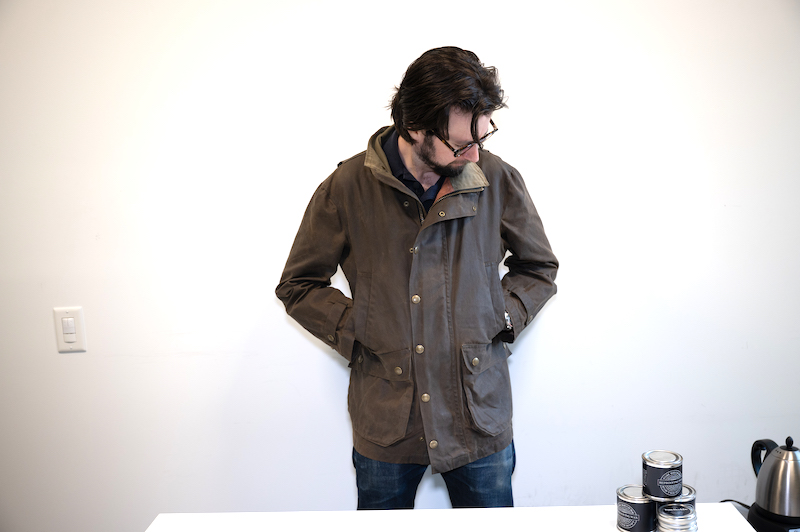 Ready to wax your own jacket?

To re-wax your own canvas jacket, you’d need wax, heat, and a tiny bit of elbow grease..

Clean the jacket first then you can apply the wax. And less is more when applying wax, since it’s much easier to add little by little.

Take your time and enjoy the process of maintaining waxed canvas, which you might actually find to be quite satisfying.

Eugenio (or Eugene as called by most of his friends) loves functional art and appreciates good design that also works. He is into the well-made tools that he enjoys for his hobbies and also loves to nerd out about it. He is always on the hunt for small but passionate makers to satisfy his itch for handcrafted goods. Check him out on Instagram: @eugeniosalonga

2 thoughts on “How to Wax a Jacket: A Step-By-Step Guide to Waterproof Cotton”