Engineer boots are having a moment in the sun. Anyone who’s anyone in the boot world is rocking these throwbacks from the civil war. 11 inch shafts, high heel stack with a woodsman heel, buckle on the vamp and collar and shit-ton of attitude.

Where to begin? Or rather, where did I begin?

It’s April 2021 and I am 4 months into my Nick’s Robert boots. I got them as “New Old Stock” on black Friday and between the exchange, shipping and duties I was still out about $600 CAD. I am looking for my next pickup but want to stay budget conscious. Then one of my favourite YouTubers posts about Indonesian boot makers. Suddenly, my instagram feed is full of fantastic work from a world away. One boot style keeps catching my eye–The Engineer.

I start digging into where I can find a boot that looks this good domestically. The entry level brands, Red Wing, Frye and Chippewa are either no longer sold in the USA, not made at all, or don’t have the same aesthetic I was going for. (Think grandfather’s Harley boots.) They just weren’t for me.

A few brands did catch my eye (specifically Brian the Bootmaker and Wesco), but between the wait time being measured in months to even years, and the price going north of $1,000, there had to be better way.

To Indonesia I go… 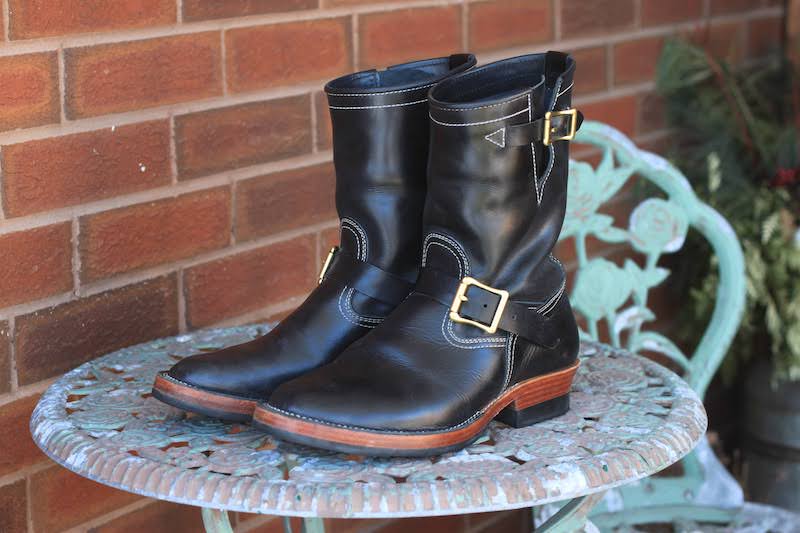 Located in Jakarta, Benzein is one of the top boot maker in Indonesia. Ran by Adi, they have 7 or so makers creating hand-lasted and hand welted footwear. They specialize in Veldtschoen construction, but depending on the style will also use a traditional Goodyear welt.

Benzein, and many of the other Indonesian makers offer a full Made-to-order (MTO) service. What this means if you are in control of (nearly) every decision about what these boots will look like. Their Instagram feeds will show some of the more popular makeups but with a keen eye you can start to spot the differences between some: stitching colour, shaft length, heel type, sole type, leather combinations etc.

[See our full list of the best Indonesian boot brands]

Since there is not a fully functioning website, I contacted Benzein via Whatsapp (+62 811 225 8998). I was familiar with this step thanks to Nick’s video above, and as a result did not have any drawbacks to communicating in this manner. Given the time change there were some instances where we happen to be online at the same time but typically there was a 12-hour loop. A message in the morning would be returned in the evening and vice-versa. Again, because I knew what I was getting into I wasn’t put off by the communication method.

Once we settled on the style and the make-up (more on that later) it was time to get the fit down. I was sent a series of measurements to do, including length, ball, instep, calf height, as well as a tracing of my feet. Once completed I was told based on the measurements I would be a 44E (my brannock is 12EE).

Payment is done in 2 stages, half up front, half when the boots are done. I was told to expect my boots in August. The waiting game began. Cut to 5 months later – right on schedule I get a message with a set of pictures — your boots are ready. Money sent, I eagerly awaiting the DHL shipping notification.

No one likes talking about money unless you either have it–or saved it. I don’t necessarily fall into the former category but I will scream from the rooftops about the pricing on Indonesian boots. For the make-up and options I chose, I paid USD372 (355 plus paypal fees). This price included shipping but not import duties, which ended up costing another 50 or so.

If I wanted to go with a Horween, Shinki or Maryam leather it would have cost 475 plus fees. Still a steal compared to most other options on the market. 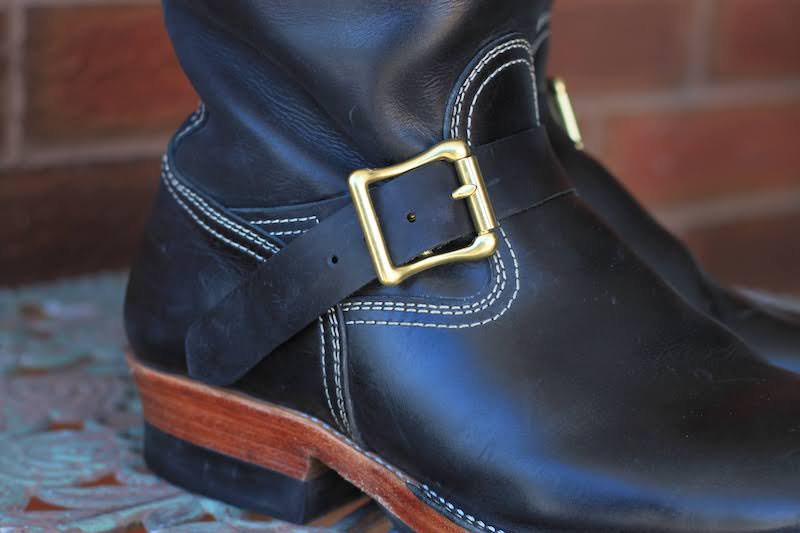 Engineers are not what you would consider a subtle boot style. They are 11 inches tall with a high heel and buckles. With that in mind I wanted to stay pretty conservative with my make-up. I have been scrolling their Instagram for some time and kept going back to the same design. Black leather with natural midsole. I saw a post I liked and said, “Give me that, please?”

I had never had a lace-less boot and didn’t want to break the bank in case it wasn’t my style. I decided to go with their local leather, Java Pull up black. There were some imported leathers available, including some Horsebutt and Horween CXL, but as price was my main concern at the time, I was looking for some corners to cut.

The only change I made from the picture was to go from a full sole to Dr. Sole Supergrip half sole. The black leather is contrasted by white stitching, brass buckles and natural edge on the leather midsole and heel stack. The heel is a woodsman (curved) heel with a Dr Sole heel cap. The toe is unstructured and the boot is fitted on the Kujang last. The vamp is lined with the smooth side out to allow for ease of getting the boot on and off. 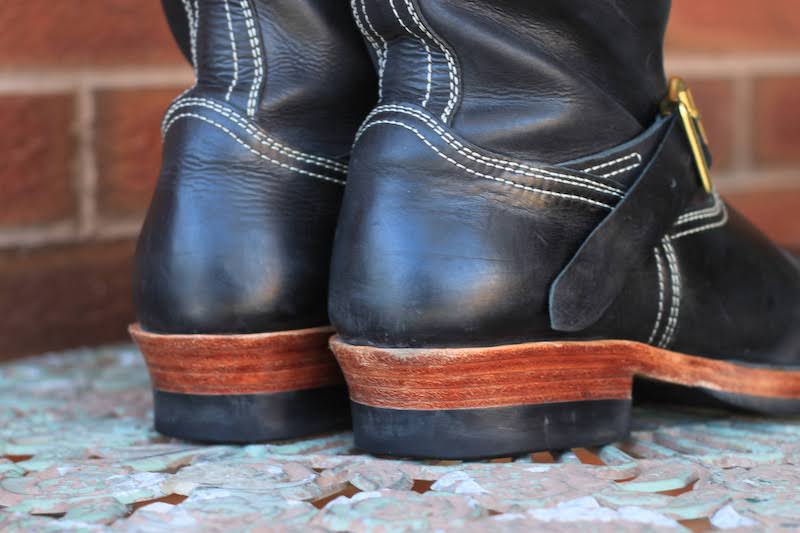 The boots were very well packaged. Compared to a Nick’s or Whites, that come in a printed cardboard box without paper, these were more akin to an Alden or Viberg. Textured cardboard with a gold debossed Benzein name and bull logo on the outside. The boots themselves were in plastic and branded shoes bags.

Out of the box there were a couple items that caught my eye: a bit of glue, some leather imperfections, but nothing that made me too concerned. The finishing otherwise was fantastic. The sole edges were well polished and there wasn’t a stitch out of place. It was hard to believe I was finally holding these boots that were made for me from a world away.

I had always heard that trying on Engineers was an engineering feat unto itself. “Put your feet in plastic bags with lube until you break your boots in” was something I was not really looking forward to however, when I did go to put them on, I was shocked and scared — my foot went right in. Lo and behold, they were too big. My ankle wasn’t locked in but also my toes seem squished. The instep had a lot of extra volume as well. 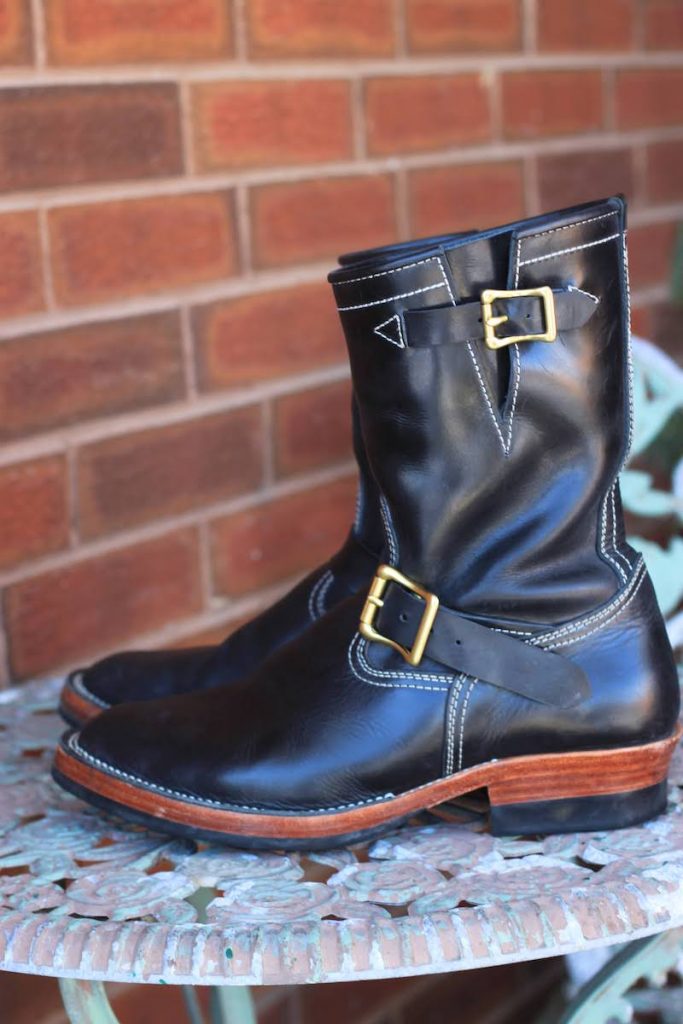 I immediately messaged Benzein and they responded right away. They were very sorry to hear and suggested some insoles. They also offered a credit for the future. Through some trial and error of different insoles I eventually settled on a piece of 5-6oz leather that I had leftover from some projects, cut into a half-insole and skived down on the sides.

Break-in was mighty. I punched an additional hole on the strap to really get my heel locked in at first, but no longer need to use that. I wore them for a couple hours at a time and would swap them out when my feet started to hurt. On my first full day I got some blisters on my heels but from then the heel cup was well worked in.

6-month on and the boots are coming along nicely. I can wear them for a full day without major issues, but the fit still isn’t great. My toes are somewhat squished while the ankle and vamp are loose. The Dr. Sole half soles are very grippy and the thick heel cap offers some good impact protection. The leather has lots of creasing and some grain break which is to be expected with the local leather. Every stitch is in place and I haven’t had any issues with built quality.

[Related: 12 Tricks for Breaking In Boots] 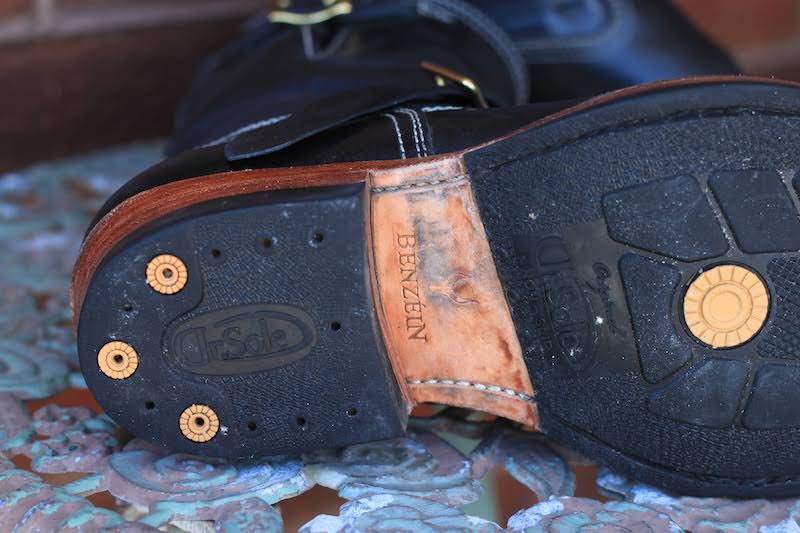 What Would I Have Done Differently?

We’re nearly a year on from my original conversation with Benzein—so looking back what would I have done differently? 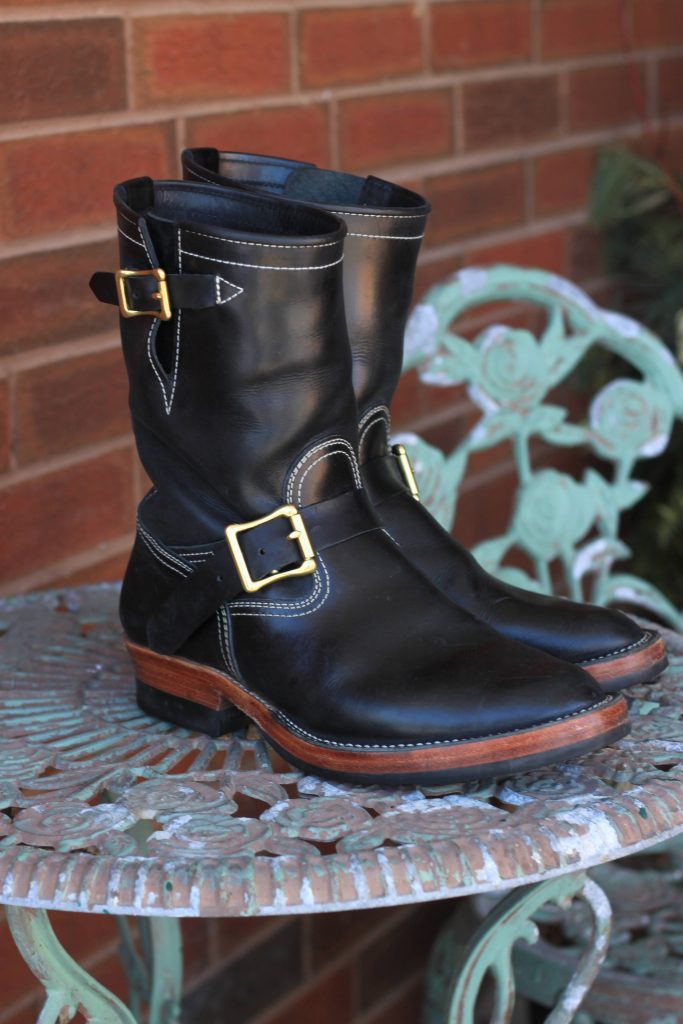 Despite the boots not fitting perfectly, it is hard not to love these boots. The look and the craftsmanship are fantastic. They might not be the most comfortable or well fitting but they are still among my most worn boots (weather permitting). These boots are evidence that you can love something in spite of their flaws.

I would highly recommend ordering from Benzein or another Indonesian maker. For not much more than a Red Wing, you can get a Made-to-Order pair of boots with much better finishing. Depending on your style there are many different makers to choose from. I have started to design (in my head) what my next pair will be. The possibilities are endless…

Daniel works and lives in Toronto, Canada. A father of 2, Daniel is currently undergoing the transition from fast fashion to high quality menswear. It's not unusual to see him rocking his Nicks boots, selvedge denim, and Under Armour shirt with baby strapped to his chest.