People looking for their first pair of boots often likens the process to an odyssey.

Naturally, there are different reasons a boot might be expensive, but the great thing about boots is that you can usually point to concrete reasons why an item costs a certain amount. This is in contrast to a lot of fashion brands, where you’re paying for a name instead of paying for quality.

Typically, a boot has a high cost because of  the labor, the materials, and/or location of production. But in order to examine how much better expensive boots are compared to cheap boots, certain variables have to be considered.

Variables That Determine a Boot’s Quality

We sat down with Nick and YouTube cobbler Heath Potter to discuss how these variables differ in boots of various price points.

In the world of boots, you’ll usually see one of these five main types of construction. While each method has its own merits, how a boot is made will determine how repairable it will be. Cheaper boots tend to use cement construction. You can’t resole them, so the longevity is affected.

Cement construction is not laborious, and can be done fairly cheaply and quickly: essentially, a manufacturer glues on a pre-made sole to the boot’s uppers.

These boots use molded soles like the ones you would typically find on a hiking boot, contouring the boot and wrapping up around the toes and heel. Timberland’s Waterproof boot is an example of a boot that uses this type of construction. The stitching running along the perimeter of the boot is fake; it’s not holding anything together. 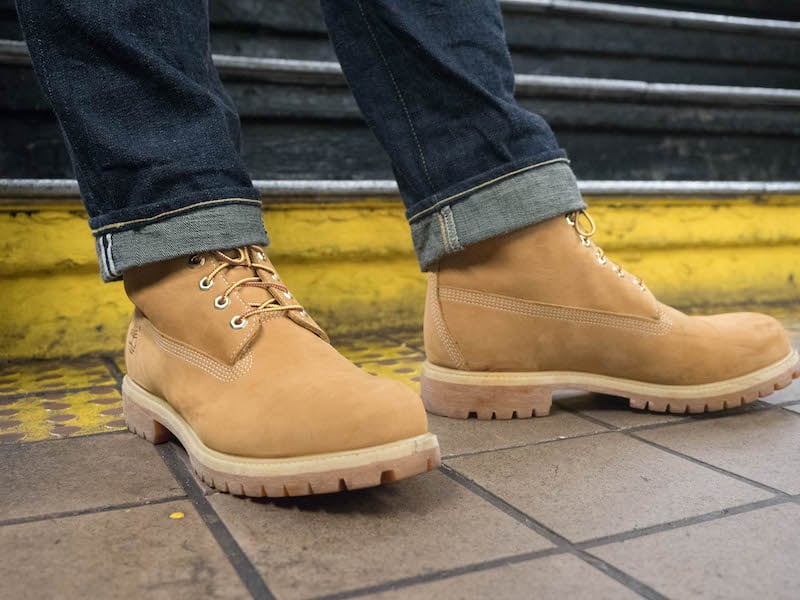 While some cobblers. can resole a cemented boot, it’s very laborious and seldom worth the cost. You’re meant to toss the boots once the sole or the glue wears out.

On the other hand, expensive boots tend to utilize a Goodyear welt construction or another more skilful method like stitchdown or Blake stitch, which are a little harder to resole but most cobblers can still manage it if they’ve got the equipment.

A Goodyear welt construction offers bootmakers a modular way of building boots. Each component of the boot is stitched on separately: the uppers are stitched to a welt, then to a midsole before finally being stitched to an outsole.

Heath warns that many brands fake (or suggest) Goodyear welts and stitchdown constructions by gluing on imitation welts and stitching to their shoes, like the Timberlands. If you are an unsuspecting customer, you might get fooled by these tactics.

Note that not all Goodyear welts are made the same: some brands will use a plastic or rubber welt as opposed to one made with leather. These kinds of welts are cheaper and will not allow as many resoles — you can expect to get through just one.

Aside from the construction method, another thing that sets cheap boots apart from expensive boots is how the heel is structured and made.

You will commonly see one-piece rubber heels on cheaper boots. While these heels are perfectly fine, and even very water resistant, Heath tells us that,

Once you were it down, the whole piece will have to be replaced.

This is different from expensive boots that have heels made from stacked leather: you can just remove the piece that is wearing down and then add a new layer onto it. This is one of the many ways that more expensive boots actually save you money in the long run.

Another aspect of boots that changes between price points would be the part your feet are standing on: the footbed.

Cheaper boots often come with rubber inserts on top of a fiberboard footbed. Fiberboard is basically paper: these footbeds provide a quick break-in period but at the price of longevity. They will crack if there is an excess amount of moisture present.

If you’re paying upwards of 300 dollars for a pair of boots, then you should expect the insoles to be made from a piece of thick, vegetable-tanned leather. Vegetable tanned leather is more breathable and will mold to the shape of your foot over time.

In some boots, the inside of the uppers will be lined with secondary material. Depending on the material, they can make the boot more or less comfortable in the long term.

As a cobbler, Heath deals with all sorts of repairs related to liners, explaining that the synthetic fabric used inside cheaper boots tends to rip easily. High-stress areas, such as the heel and the top of the toe, are places where fabric liners disintegrate first. Once it starts to rip, it will spread and get in the way of your foot.

By contrast, expensive boots tend to be lined with leather — which gives a soft, luxurious feeling on the foot — or not lined at all. Yes, unlined boots are better than those lined with synthetic fabric, as not lining a boot has benefits: unlined boots breathe better in the heat and are better at molding to the shape of the foot and securing the heel.

Quality Of The Leather Uppers

Brands are aware that consumers look for buzzwords when they shop for boots. In the previous section, we mentioned how the term “Goodyear welt” is one of them. Another buzzword to add to the list is “full grain leather”. Full grain leather is leather that hasn’t had the side facing the elements sanded down to produce a smoother, more consistent look. In the boot world, many enthusiasts believe that this type of leather is the most durable and has the most potential to patina, or age beautifully.

But there’s no regulation of these terms — even Horween Leather Company, the most celebrated tannery in the US, like to use the term “top grain” to describe their best leathers.

The truth is that the term isn’t controlled and it’s not exclusive to expensive boots. In fact, some of the expensive boots that get praised in the community aren’t made from full grain leather at all: Horween’s Chromexcel leather, perhaps the most beloved boot leather on Earth, has been slightly smoothed or “corrected”, meaning it’s not full grain.

Nick and Heath suggest that when buying expensive boots, you should avoid looking for the term full grain and instead look for where the leather comes from and which tannery makes it. Need a guide? Here are two:

The price of a boot is a good indicator of its quality. If a boot is $500, you’re usually buying a boot that is worth that — boot buyers at that level are discerning folk and a business simply won’t last if customers don’t think it’s worth the price.

But when examining the quality of any boot, makes sure to check for the construction, the heel, the liner, the footbed, and the leather’s source. If you don’t have as much time as boot nerds like us to research a brand’s ins and outs on Reddit, these elements will provide you with a great blueprint for quality.