Sutro Footwear has been in business for over 35 years and they’re the San Francisco boot company. The company is named after a former mayor of the city and all of their shoes are named after streets and landmarks around town.

The company is pretty well known for their low prices, Italian lasts, and the unusual tanning methods they use for a lot of their leathers. Now, I’ve already reviewed their Alder boot, but what they sent me for today’s review is the snappy-but-rugged Charlton boot, named after Charlton Court in Cow Hollow.

Here’s what I thought.

The boot is a nice balance of being rugged without going overboard. It’s got sturdy triple stitching along the vamp, a nice dark leather trim alongside the brass eyelets and the top of the shaft, there’s a gusseted tongue — a must for a lot of guys worried about water or pebbles making their way to their socks — and a crisp, Christy Vibram outsole.

The sole is basically industry standard for folks who 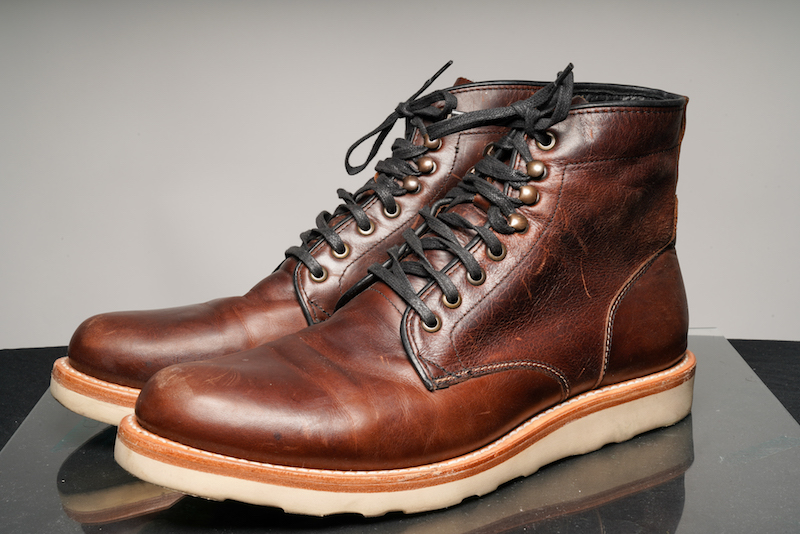 I’ve got a similar, but not identical wedge sole on my moc toes from Thorogood and Red Wing and Santalum, but it’s a bit more unusual to see a bright white sole on a relatively sleek leather boot like the Charlton.

It’s important to note these shoes are available with a more standard rubber-and-leather outsole that makes them look more like an old fashioned workboot (perhaps most like the Red Wing Merchant), but the Vibram really does help with to give the shoe a casual look. So, sure, they’re hard to dress up, but they work great with jeans and a t-shirt, which isn’t always the case with plain toe boots.

Do they look good from a distance? Yes. Do they have some issues when you get close? Yes. One frustrating aspect is that the speed hooks are crooked and the laces are a bit too thick to comfortably use them, but the main thing I want to talk about is this leather. 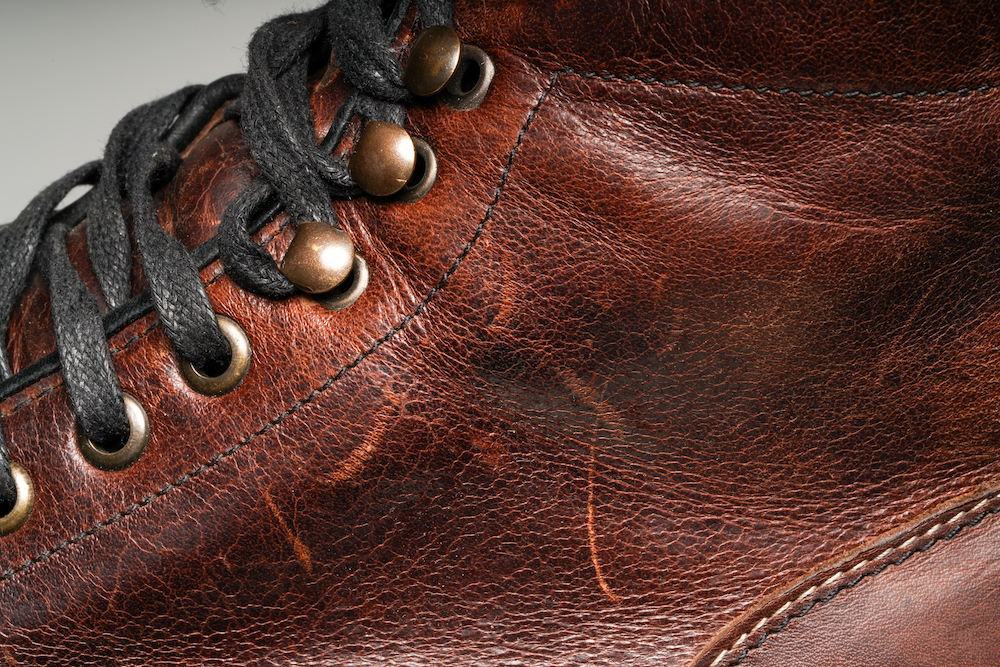 This leather is relatively thin at 1.6 millimeters, and Sutro gets it from Mexico’s famous Le Farc tannery, which I named as one of the top 5 tanneries on Earth.

It’s developed with plant based oil, beeswax, and some plant based waxes during the tanning process and they also  give tone and color to the leather with vegetal creams, which refers to creams that get their color from natural sources like tree bark and pomegranate.

Now, I’ll be honest with you: I don’t love this leather. I have no issues with the toe or the heel, but the leather used for the shaft is covered in loose grain, to the point that it looks like old man skin.

To be fair to Sutro, they don’t use any finishing on the top layer which, in their words, is

why you can see all the nicks & marks of hide, natural stretch marks, pores, and so on.

Leather that looks old when you get it is kind of Sutro’s thing; I had a similar experience with the Alder boot, which looked wrinkled and beat up when I first got it. Now, there is a market for people who don’t like these hyper smooth, shiny leathers and want boots to look worn in straight away, but whenever Sutro appears in online boot forums like r/goodyearwelt, they’re routinely lambasted for their leather.

I get that there are people who like “imperfect” leathers that show scars and bumps from the animal’s life. But the kind of stuff I see from Sutro… it’s rare to find someone who prefers their boots looking like this. 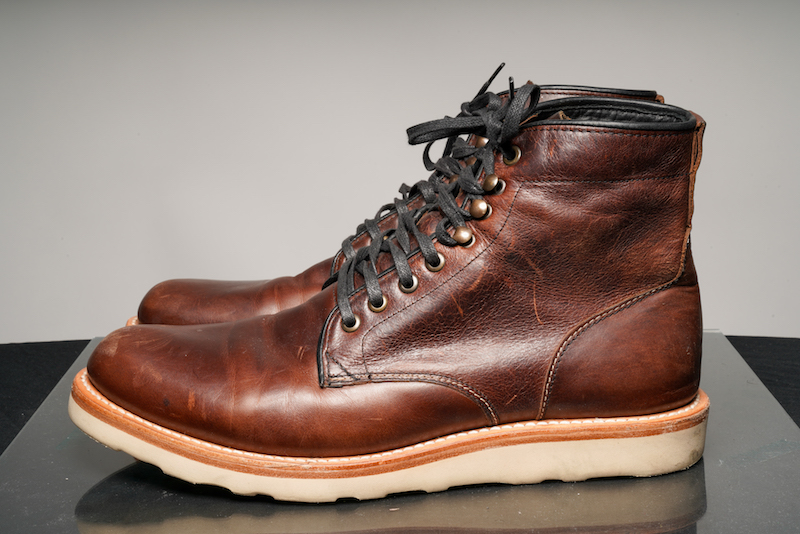 Sutro recommends rubbing scratches with a damp cloth, cleaning them with a damp cloth, even rubbing it with a cloth to help bring back the luster. This is because beeswax is used as what they call a “lifetime conditioner” during the tanning process, and vigorously rubbing the leather or buffing with a horsehair brush kind of activates the wax and brings it back to the surface.

The company also sells a neat leather care kit with their own water based cream, cloth, and applicator for just $15, which is a pretty good deal. If you want something more “industry standard,” they’re a big fan of Chamberlain’s Leather Milk, an all natural product that’s great on most leather boots.

A weirdly high number of people complain these boots aren’t waterproof, which doesn’t make sense to me because boots are seldom waterproof. These have a 360-degree Goodyear welt which makes them very water resistant. But if you want to increase the water resistance you can use something like Jason Markk’s Repel, or for something more natural you can go with mink oil, which creates a protective barrier around the leather. That will darken your boots, though — I prefer Cobbler’s Choice, which uses triple filtered beeswax to help water resistance without changing the color too much.

[Related: The 5 Best Boot Conditioners on the Market] 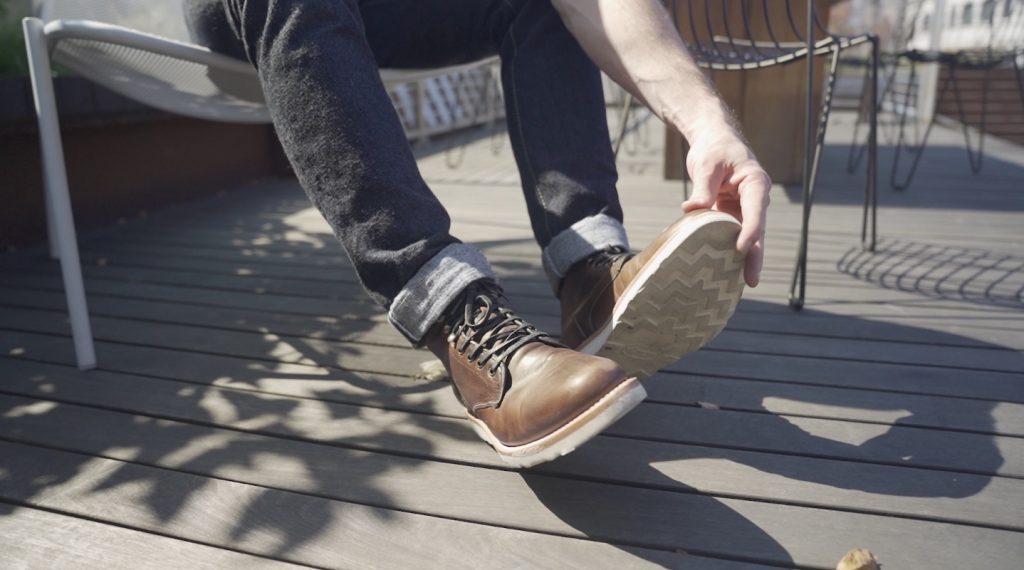 Once again, this is the Vibram wedge outsole, a classic sole that’s very common on boots. It’s a natural gum-like rubber that’s hardy and grippy while also providing great shock absorption and comfort. It’s very informal, but hey, you know that when you get into it.

After the outsole there’s an extraordinarily thick leather sole, an unusual midsole of hardened paper, a layer of cork filler, a metal shank — which confers some stability and arch support — and finally a removable insole cushion. The insole is made from high density polyurethane with closed pores, which is different to the open pore polyurethane that you’re more likely to get in running shoes. Closed pore is more for walking shoes and boots you spend a lot of time standing in.

Of course, it’s held together with a Goodyear welt, which is great for water resistance and for making it easy to resole when the time comes. 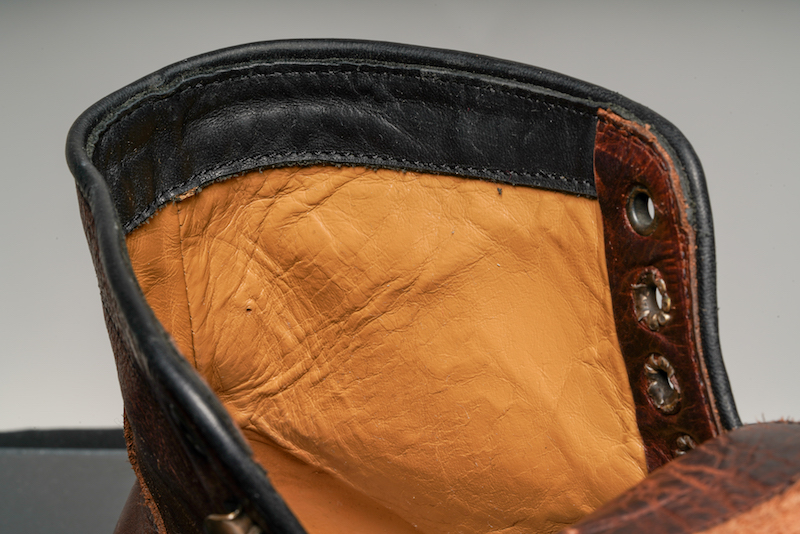 These currently run from sizes 7.5 to 14 and they stop doing half sizes after 11.5. Fortunately, that’s my size, and they fit true to size — don’t size down with these like you would with Red Wing, Wolverine, Thursday, and so on.

A downside with the fit is that they’re only available in one width, which is bad news for guys with wider feet.

Now as for comfort, they’re leather lined, of which I’m a big fan. It’s not as soft as the glove leather lining on Thursday boots or Taft boots, but it’s enough that I didn’t experience any blisters breaking these in.

The arch support isn’t great, and the shoe in general doesn’t contour the foot as well as Sutro’s Alder boot, but the footbed is decently squishy and the shock absorption is great. I’d give the comfort a B, which is a pretty good grade, all things considered. 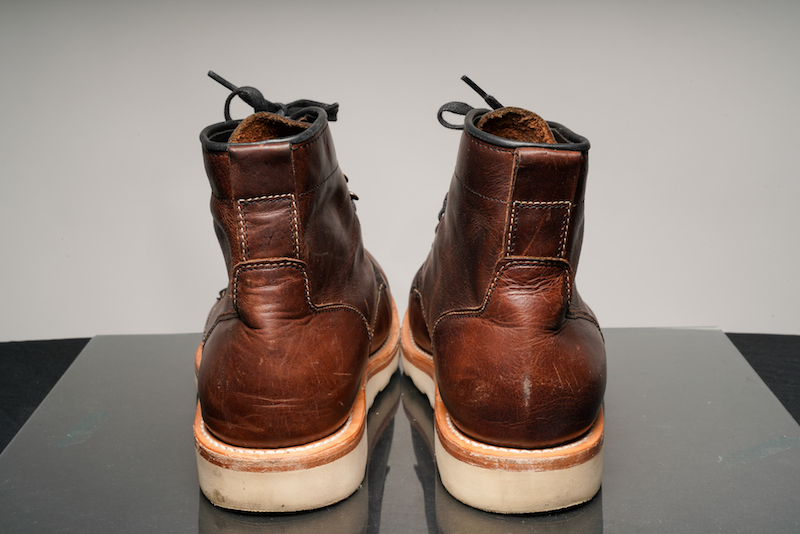 The rule of thumb in the world of Goodyear welted boots is that anything under 300 bucks is inexpensive, an given these boots are hand crafted, it’s not a bad price. 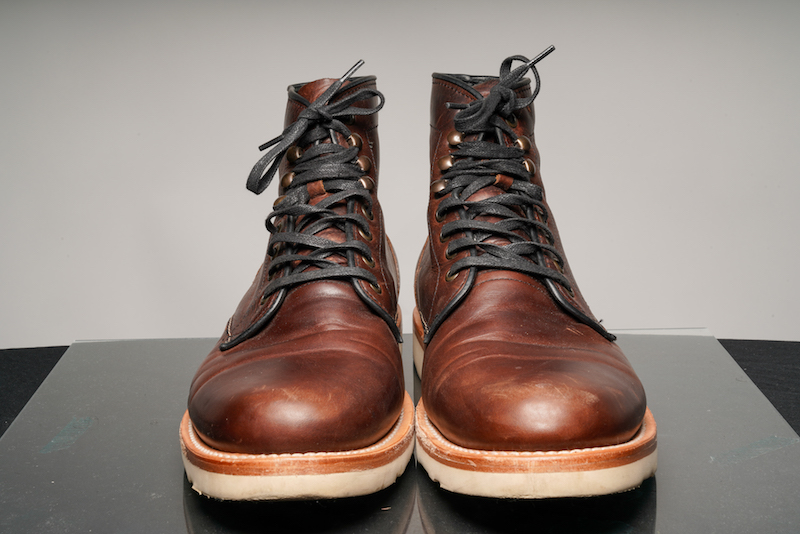 These boots are inexpensive, they’re comfy, and they have an interesting aesthetic that shows you care about quality boots but you don’t want to go too formal with a leather outsole. These are sleek, plain toe boots that can comfortably be worn with a t-shirt, which isn’t a look you see many brands pull off. The Charlton does.

I love the leather lining, the Goodyear welt, and the price. My biggest gripe is the leather — it’s just ugly. Sutro needs to do a better job of quality control with their leathers, as they’re frequently called out for it in the boot community. Then again, a lot of people like this sort of distressed, old-man-skin leather so if that’s you, there’s not much else I dislike about these boots. If you dig the leather, they’re worth a buy.