2022 update: This brand has shut down. Don’t buy stuff from them!

YRX. A weird name for a millennial-owned company that makes some delightfully weird boots.

On the FAQ section on their site where the frequently asked question is “what does YRX mean?” they snarkily reply with “What does Nike, Google, IKEA or Sony mean?”

So, I guess it means nothing, but they call themselves a minimalist boot brand. When you buy their boots they give you a free brush and shoehorn, and much of the boot is handmade: some of the stitching is done by machine, but the leather and wool are cut by hand and the shoes have more of a human touch than I would have thought for a product that has such a low price point.

The cost is the main draw here, and it’s kept low in part because they exclusively sell online and also because they’re made in China — so let’s take a look and see how the quality matches up after a few weeks of wear.

As you can see in the featured image for the video up there, these shoes look a lot like the Taft Jack boot. (Read my review of the Jack boot here.) That’s the flagship product of the twenty-something-million-dolar company that I’ve reviewed a lot in the past, and yes, they’re both made of wool with leather on the toecap and counter. The main differences are that the Apollo boot uses cashmere wool, it’s made in China instead of Portugal, it doesn’t have a pull tab and it has a slightly longer vamp — in other words, it has a slightly longer, leaner look to it.

The pair YRX sent me is their Black/Tan color (the sole is the tan part) and to be fair, Taft doesn’t currently offer this color combination for their Jack boots. But the Jack boot aside, there are other differences in the construction and materials that make this its own, distinct boot. 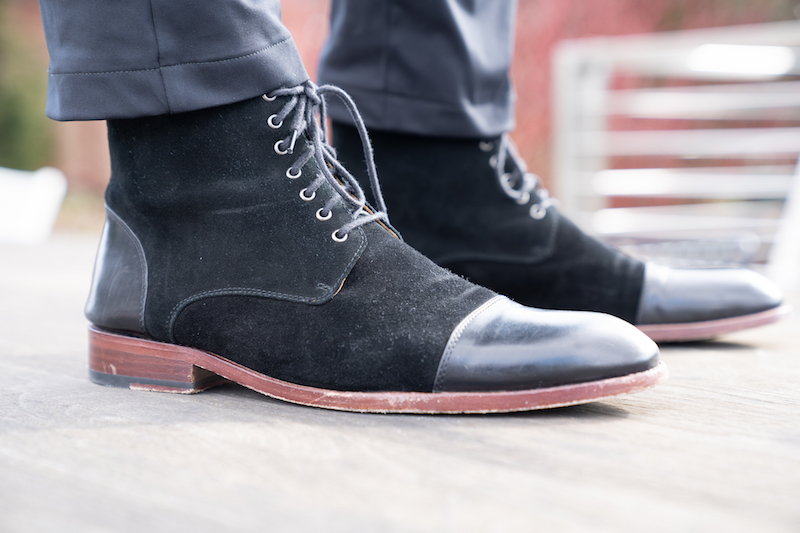 The upper in this boot is made with cashmere wool from Guangzhou, the third biggest city in China. (Fun fact: I spent two years in Shanghai.) Cashmere is different to regular wool: it comes from goats and it’s better at insulating and regulating temperature than sheep’s wool, plus it has a softer feel. The wool on the Apollo boot is cut real close, so much so that it feels more like velvet than an animal product.

The only info I was able to get on the leather is that it’s imported to China, it’s 1.8 to 2 millimeters thick — pretty thick for this kind of shoe — and it’s Tier 1 full grain leather. That means it’ made from the outside of the animal’s hide and it’s pretty good quality, although you shouldn’t expect graininess; this leather has been “corrected” so that it’s very smooth and relatively dressy looking. It marks pretty easily, but the boot does indeed work as a casual shoe or something you’d wear with a blazer. 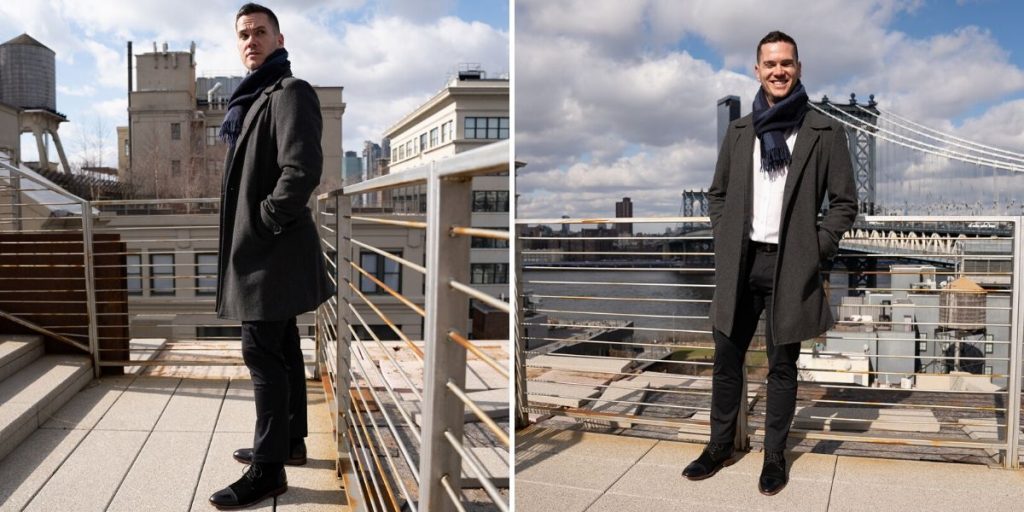 The way YRX puts it,

We have taken the sophistication of a leather sole & embedded functionality of rubber grips. All without compromising style.

So, the outsole is injection rubber that’s fitted into an Italian leather sole. I really like this because the rubber provides better traction on wet surfaces, while the fact that it’s leather means that it’s flexible and relatively soft.

[Related: The 6 Boot Soles You Should Know About]

After that outsole there’s a layer of cork, a steel shank under the insole, and there’s also a DuraEVA™ Comfort Strip Midsole in there. That’s the same type of EVA used by Thursday Boot Company, and variations on EVA are also used in athletic shoes. Why? To help improve shock absorption and give a little more spring to your step.

Lastly, the sole and upper are attached with a Blake stitch that is also cemented, which means it’s both stitched and glued together.

Now the method of attaching the sole was a bone of contention for me because they told me it’s “handmade welt construction,” but they also told me it’s Blake stitched. (That’s when everything is attached with a stitch that goes through the insole and outsole, sometimes the midsole as well.)

Upon further investigation and some emails to a shoemaker friend of mine (Andrew Svisco at Parkhurst boots) I ascertained that the stitching running along the outside — which would suggest a welt — is just for aesthetic purposes. That’s not super uncommon (Taft does the same thing), just remember that these shoes aren’t as easy to resole as a Goodyear welted shoe.

[Related: Goodyear Welt vs Blake – Which Is Better?] 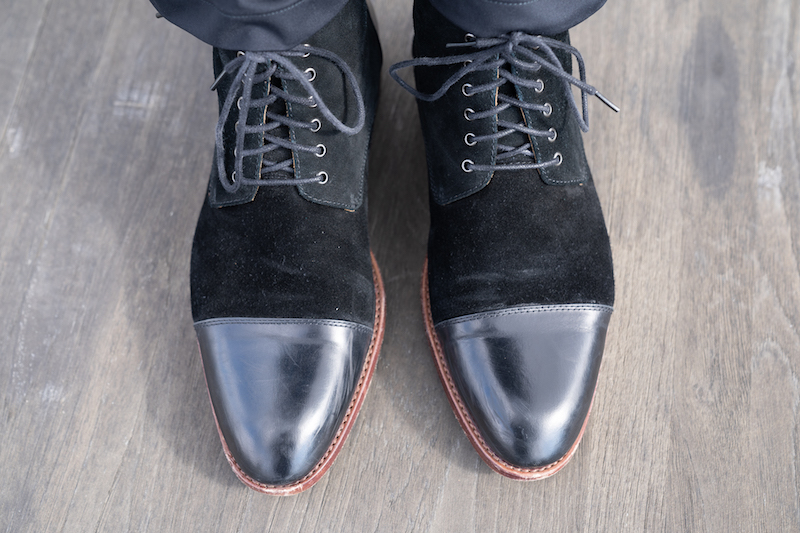 For taking care of the shoe, YRX includes a brush with their product, which is a delightful touch, and they suggest using it regularly to remove any visible dirt and dust from the wool.

When it’s real dirty, you should wash it in cold water with a mild detergent, like The Laundress’ Wool & Cashmere Shampoo. Then lay it on a towel and let it dry.

For the leather, you’re advised to clean it by grabbing some Kiwi Saddle Soap, rubbing a rag into it, and scrubbing the surface of the leather with a light touch. 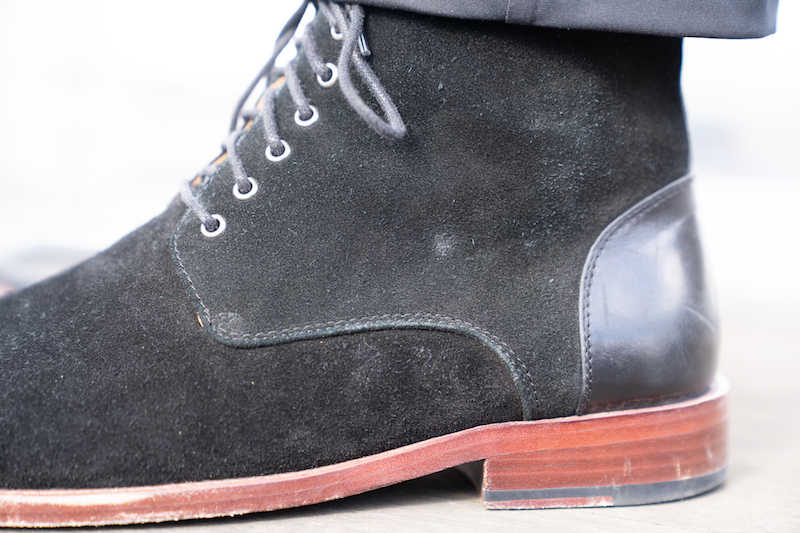 These shoes do not come in half sizes and you’re advised to size down if you’re between sizes, like I am. My true size is 11.5, and the 11 fit fine, but I do need to use thin socks with them. I would have preferred an 11.5, but maybe as the company matures they’ll have more offerings.

When wearing in the shoe I didn’t experience any blisters, in part because of the leather lining. It’s also pretty flexible on account of the leather sole and the rubber lugs confer great grip. That said, despite the EVA, I wasn’t blown away by the shock absorption and I found the arch support was a little better in one shoe than the other. This would bug me for $300 shoes, but YRX is so inexpensive that I didn’t really take issues with these aspects of the boot. 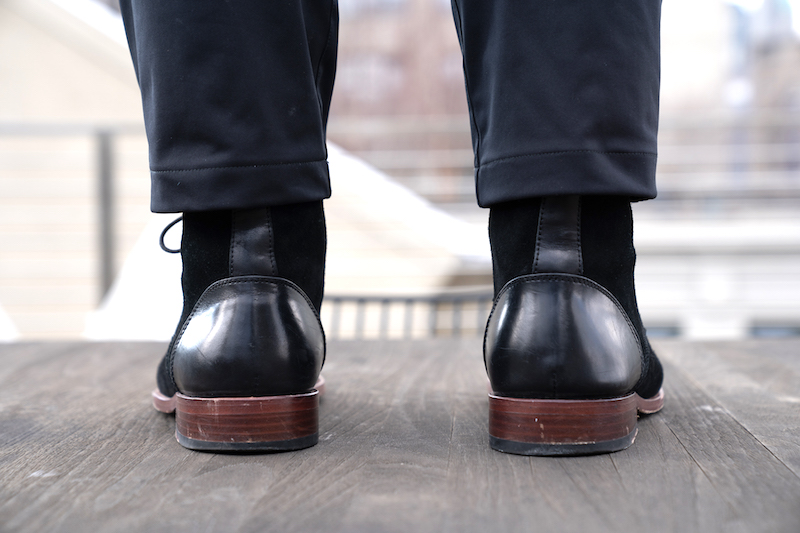 Through responsive production, a lean business model, and long-term thinking

they are able to bring you stupid cheap boots. That part’s my wording, but these shoes are indeed inexpensive, coming in at $199 per pair and with my discount code it drops even further down to $174 per pair!

For reference, most good quality boots are over $300 and decent boots under $200 are very few and far between. The price is the most impressive thing about the product; that, and the fact that no other pair of boots has gotten me this many compliments. 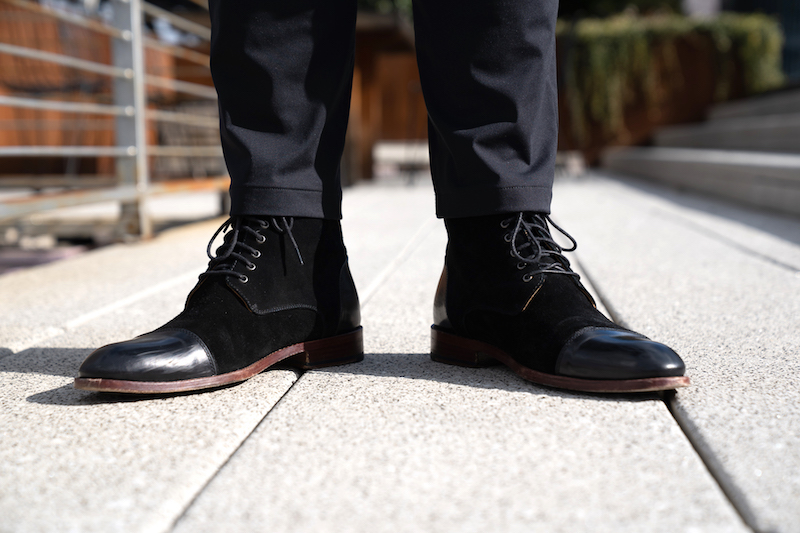 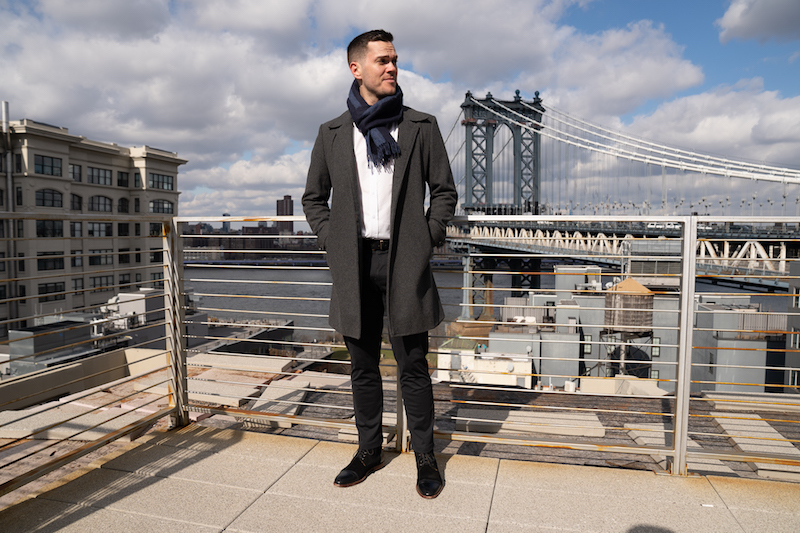 I have many boots that cost many times more, but none of them got me as many compliments as my Apollo boots. Does that smart a little, given how much I’ve spent on other boots? Sure. But the company’s tagline, which is written on the box itself (“Get Ready for Compliments :)”) rings true. People like these boots.

Plus the grip is good, they’re leather lined, the Blake stitch makes them super lightweight, and you get a free brush and shoehorn.

I’d prefer more sizes, the fit isn’t superb and… they’re not exactly robust. I know that’s the flipside of having a lightweight and flexible Blake stitch, and they do dress up a lot better than Goodyear welted shoes, but you can tell they’re not $300+ Italian made shoes.

But, like, they’re not. They cost under two hundred bucks and for this price point, they’re superb. People will pay you compliments, they look cool, and it carries very little risk to your wallet. For the value you’re getting, I’d be happy to recommend them if you don’t want to shell out for Taft.