After 20 years of working in Japan’s garment industry, Shinichi Haraki established the brand in 2003 and today it’s headquartered in Hachioji, just outside of Tokyo. Iron Heart specializes in smooth, tough, slow fading denim that has its roots in Japanese motorcycle culture, and it’s a favorite of bikers and non-bikers alike because much of the denim they produce is so darn thick.

To what extent it’ll actually protect your legs when you’re thrown from a motorbike is up for debate, but these jeans really do feel like a suit of armor and the unusual durability has garnered enormous popularity and a rabid following in the raw denim crowd, with the hashtag “ironheartarmy” clocking in tens of thousands of posts on Instagram.

I headed to the East Village to pick up a pair of 633N jeans from the denim mecca Self Edge. Here’s what I thought.

This is organic cotton, and it’s important to note that it is dyed using natural indigo. Normally denim is made with synthetic indigo, which is cheaper and faster to make, but Iron Heart’s is indeed made from indigofera plants.

Partly because of the natural indigo, is that it takes a super long time to fade. The jeans you see in these pictures had been worn for about a month and with that much wear, most of my jeans start to fade a little around the crotch. That hasn’t happened here, and when Iron Hearts do fade they usually look more vintage than the really high contrast fades I’ve accrued in my Studio d’Artisan jeans.

Whereas many Japanese brands focus on unusual, innovative, never-before-seen denims (like Tanuki’s black bean-dyed jeans), Iron Heart has a smoother, more traditional feel and the fades look more like those of jeans actually worn in the 1960s.

My own Iron Heart jeans have a very rich color that’s achieved by rope dying the warp yarns in a natural indigo bath while the weft is beige. As they get older, they’ll get ever so slightly dusty looking, a common look with denim.

When I bought these jeans I was told they were 20 ounces, but after doing some research I learned they’re actually 17 ounces. (Your average Levi’s, by contrast, are about 11 ounces.) Now, the brand is best known for their 21 ounce jeans, but my 17-ouncers feel even heavier (I believed it when I heard they were 20 ounces) and that’s because Iron Heart has a particularly tight weave when compared to something like Samurai or Oni, which are more likely to have looser weaves.

This is the kind of denim you could wear 70 years ago and you’d fit in with the greasers. 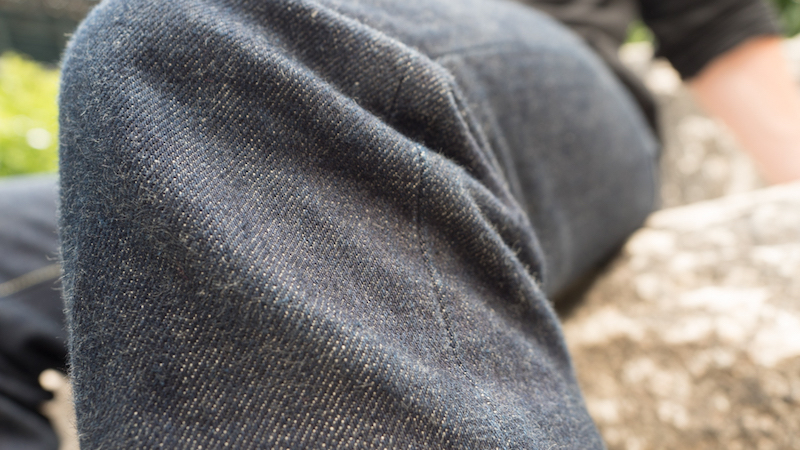 It’s very sturdy, very vintage, very thick, and very smooth. If you’re after knotty, slubby, irregular denim, you’re out of luck. This is the kind of denim you could wear 70 years ago and you’d fit in with the greasers. 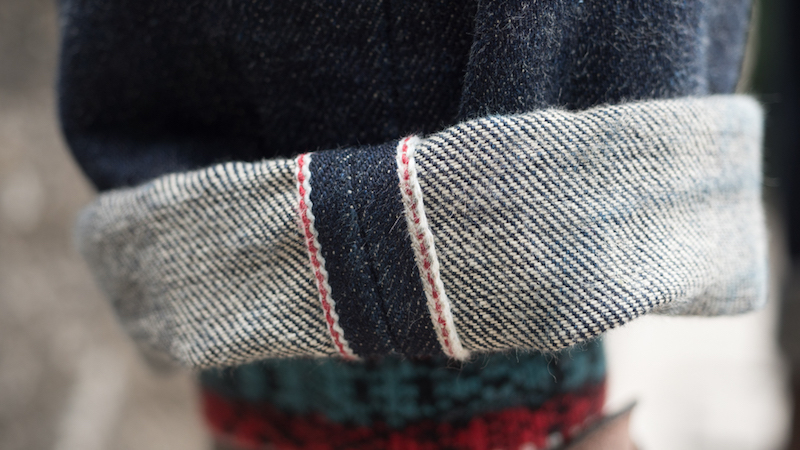 There’s not a whole lot to discuss with the details; they’re pretty simple jeans that exist for the denim to speak for itself. The main things to point out are the red selvedge ID and the dual tone stitching. It looks like the stitches are gold, but they actually alternate between gold and yellow, which is sometimes called a “lemon tea” combo.

There’s also very subtle dark stitching on the back pocket that people call “dark arcs,” and the most standout detail: a red “W” on the right back pocket. At first I thought it was a zig zag, but it actually stands for “Works” — as Works, Inc. is the company that owns Iron Heart. 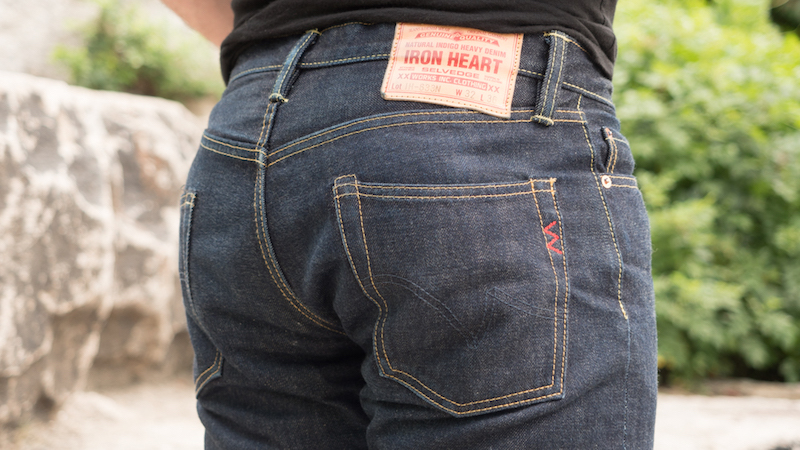 Many would consider this heresy, but Iron Heart actually recommends you wash these in a washing machine and dry them in a dryer. The instructions on the inside of the right pocket state,

When I talked to Self Edge, they suggest washing in cold water and line drying to avoid too much shrinkage. Turn them inside out before putting them in the machine.

This is sanforized denim, so they’re pre shrunk and are less likely to tighten after washing than something unsanforized like my Studio d’Artisan jeans. But a lot of people feel that tumble drying your jeans can cause them to shrink, so I line dry mine in the shade just to be safe. 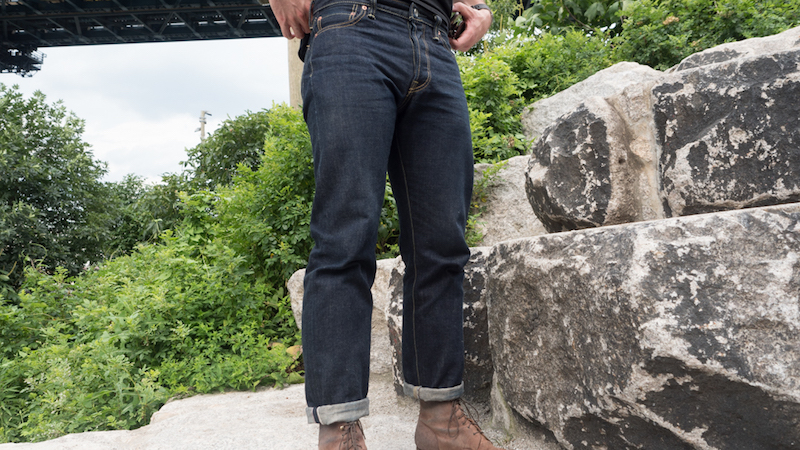 Normally I like a jean with a roomy thigh, high rise, and a strong taper, but since I lost a lot of weight this year (hooray, surprise illness!) I don’t have the same amount of muscle on my thighs and butt as usual, and Iron Heart’s tapered straight leg fit me fairly well. The idea with this model is that you get the mobility of a straight leg with the tapered look of a slim jean. The fit of the 633 is sort of a sequel to the more famous 634, which offers a more traditional straight leg.

My waist is 32 and it fits true to size, it’s not a vanity size. Make sure your waist is actually the size of the jean before ordering, an important note because most pants out there are vanity sized — they’ll say 32 and actually measure 33 or 34.

Once again, this is very thick and tough denim. I wore them every day for about 3 weeks before they were somewhat comfortable, stretching maybe half an inch in the waist, but they’re still breaking in. Most people will tell you that Iron Hearts aren’t really broken in until you’ve been wearing them for 9 months to a year. 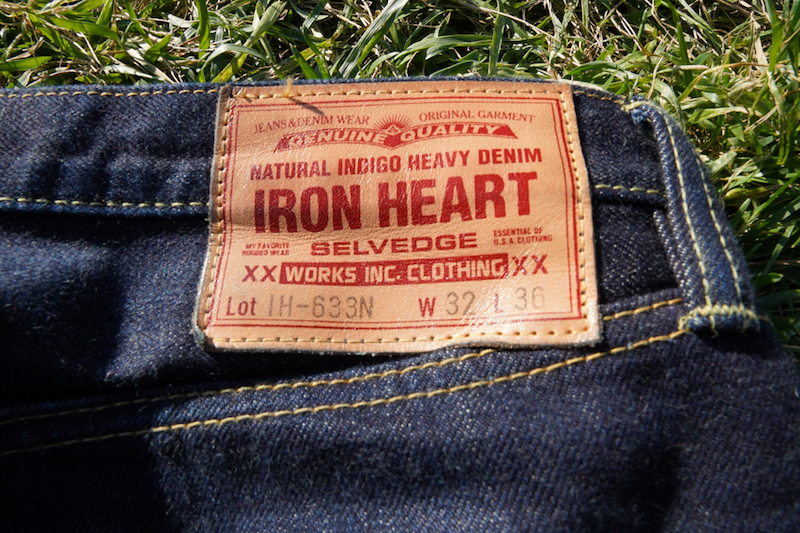 These were $325 off the rack, and with taxes and everything else they came out to $353. On Iron Heart’s British site, the price in pounds translates to about $360 USD, so you won’t find them cheaper online.

Obviously for the average person, this is a lot of money to spend on jeans. For raw Japanese denim it’s not insanely expensive — I tend to think of the average (read: acceptable) price range as falling between $300 and$350, not unlike boots. It’s also important to remember that these jeans are made with natural indigo, which considerably increases the cost. For natural indigo, raw, Japanese jeans, I’m OK with the price. 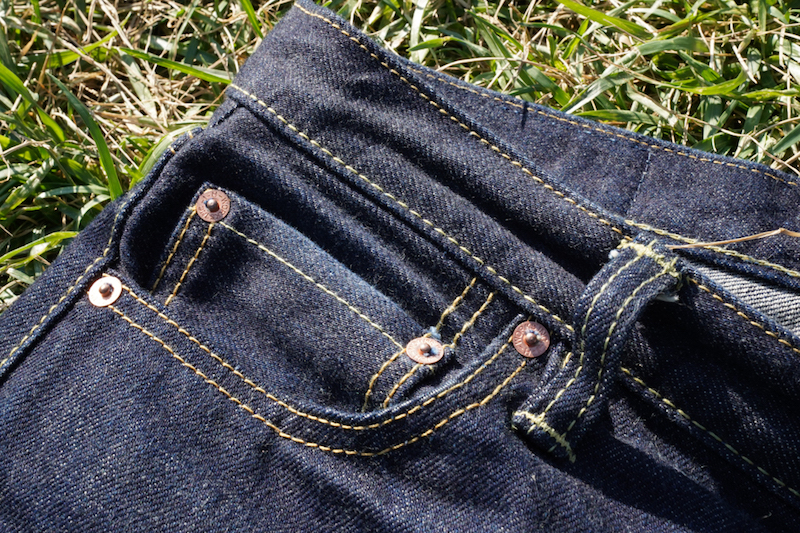 Iron Heart holds a special place in the world of raw denim, and I can see why. It’s simply timeless: it’s thick, sturdy, plain, old school denim that’s made to last. Sure, some people find the smooth, even denim doesn’t have much character — that’s a subjective opinion, of course, and the flip side is that they’re much easier to dress up than slubbier jeans. They’re also slow to fade, something that would have traditionally been seen as a plus but some folks don’t love. They’re tough as nails and hard to break in, so you need patience with these.

So as is often the case, the pros can be cons and the cons can be pros, depending on your own preferences.

But if you have the patience, this is a pair of jeans that will last you much longer than almost any other jean, and of course, they’ll get you a spot in the #ironheartarmy. If old school and tough is what you want from your raw denim, you’ll be happy with Iron Heart.