Last summer I had the greatest day of my life: I visited Red Wing, Minnesota, home of the most iconic American boot brand there is, Red Wing Heritage.

I had the tremendous fortune of being invited there by the brand’s Design and Development Manager, Mike Larson, to preview their latest creation, a groundbreaking hybrid boot that’s either a beautiful coming-together of the best Red Wing boots… or a Frankenstein’s monster. I’m dying to hear which descriptor you’d pick.

“This is actually kind of a mix and match of our two most iconic styles — the Iron Ranger and the Moc Toe,” Larson told me in Minnesota. “This is the first time we’re really doing a Traction Tred. all-around the welt construction on what’s traditionally been a nail-seat construction.”

That means that in addition to this being the first time an Iron Ranger has had the extra stiff, extra famous Oro Legacy leather used on their iconic 875 moc, and in addition to the unusual wedge sole that they’ve put on the Iron Ranger, they’ve also made more subtle changes, like using the moc toe’s 360-degree Goodyear welt construction instead of the Iron Ranger’s 270 degrees. This makes it a little more durable and symmetrical, although some guys prefer the slimmer heel on a 270-degree design.

“From a product development standpoint, we always are working two years out. We wanted break some boundaries, we’ve never done the Iron Ranger on an all-around construction. It’s been a traditional nail-seat construction and then the Traction Tred pice as well. An under the hood is some new features that we are introducing in our products.”

If these boots remind you a little of the (currently off market) Red Wing Rover, it makes sense. That boot is a plain toe Blacksmith boot with a wedge sole, but the Iron Ranger Traction Tred has more differences going on. 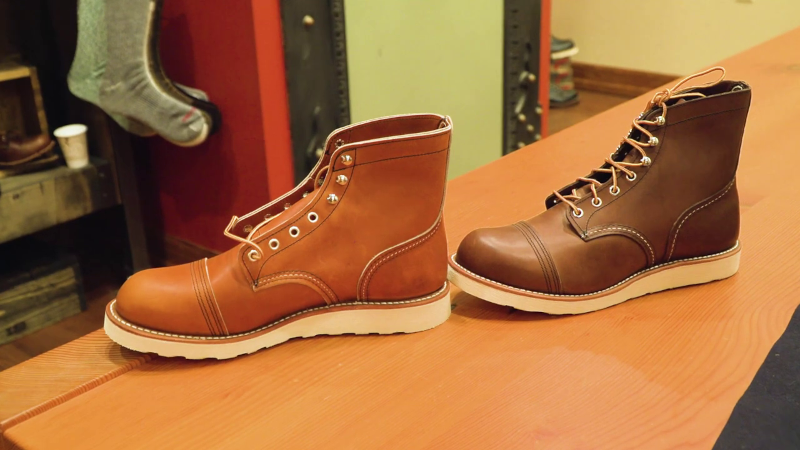 Right off the bat, you’ll notice that they named this boot the Iron Ranger Traction Tred. That should give a pretty strong hint about one of the differences about this boot’s sole from traditional Iron Rangers.

“It’s describing basically what it is: an Iron Ranger on a Traction Tred,” says Larson. “Red Wing came out with the Traction Tred design back in the 1950’s. It’s made by Vibram and it’s been a staple of our line for the longest time in our Moc Toe.”

If you’re unfamiliar with Red Wing’s wedge sole it’s  a crepe rubber made by Vibram, also called blow rubber. Crepe rubber is a soft rubber that provides great shock absorption and comfort, so it’s typically the preferred sole for modern guys who aren’t too fussed about maintaining the historically accurate silhouette of the Iron Range’rs Vibram mini lug sole.

[Related: What Are Crepe Soles?]

But under the hood, there are a few big differences from other Red Wing Heritage boots.

“The shoe is made entirely the same way, it’s all Goodyear welt construction, (but) we’re just kind of swapping materials for something with enhanced comfort,” Larson explains. “Something that will make it easier to wear right out of the box, rather than having that intense break-in period.”

At first glance, it looks like a regular leather foot bed, but if you poke it you’ll find there’s extra cushioning.

“This is something we’re doing in our heritage line now with the Chelsea that we did last season, also with this product,”  Laron says, referring to the Texon insole. “This is recycled wood, so it’s a sustainable material but it’s very durable. Your veg-tan  leather footbed forms to your foot, while this does that same thing but it also has breathability aspects and other things that make it a really good material for making shoes with.”

Their goal with this new construction is to fix the most persistent complaint they get from customers: tough break ins. 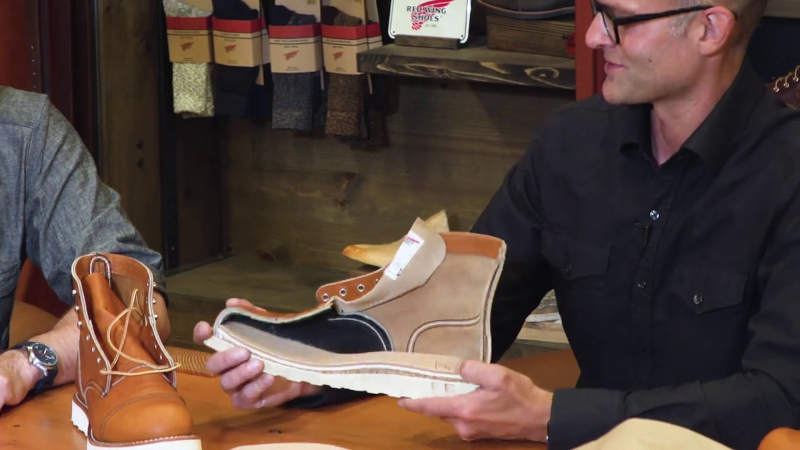 The other important addition is the use of a Space Air Mesh to line the toebox and vamp. This is a new type of nylon polyester.  They used this lining instead of the traditional canvas or leather because it helps to increase air circulation inside the boot and create around-the-foot comfort.

Other than the flashy new outsole and modern materials in the insole, Red Wing had another first for the Iron Ranger by utilizing the Oro Legacy Leather. (They also come in the Iron Ranger’s most famous leather, Amber Harness, but this obviously doesn’t have the same draw as the Oro Legacy’s debut.)

Like all of Red Wing’s Heritage leather, the Oro Legacy is from S.B. Foot Tanning, and it’s unusual because it’s very stiff and it’s not dyed with pigments during the finishing process. This method makes scars and blemishes more visible.

“This is a really hard leather to cut in the shoe factory because you have to make sure all the colors match between all different components, and you have to make sure all the scars aren’t visible,” says Larson. “So it’s a very tough boot to make. It’s Triple-H weight, it’s really heavy, and there’s a limited supply of that, so we like to conserve this leather and use it in very special occasions.” 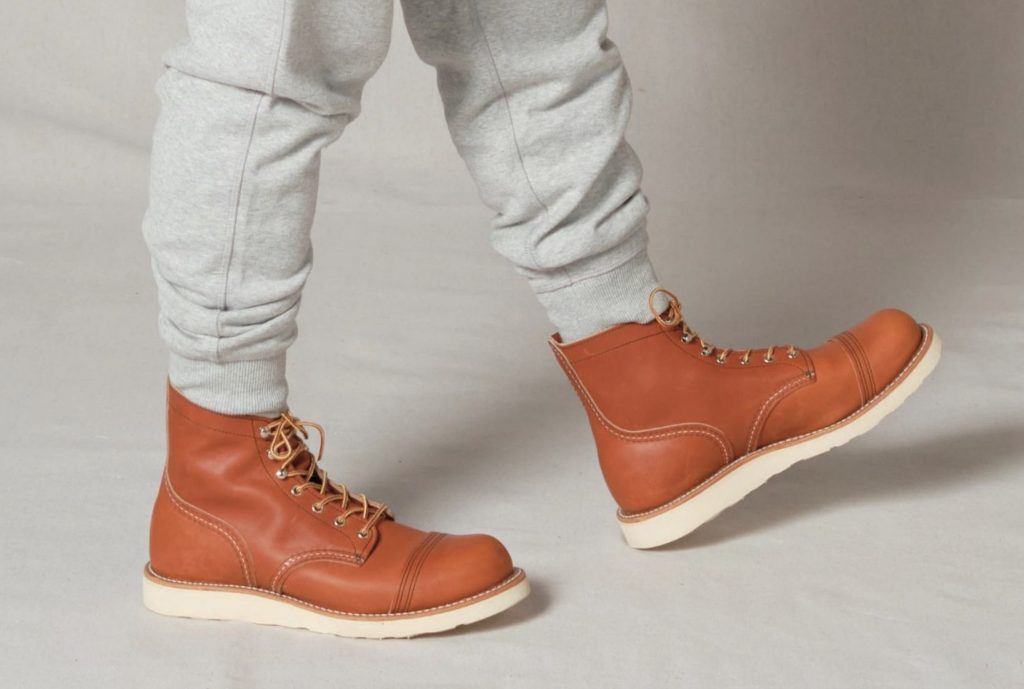 When I did my review on the new Classic Chelseas, a lot of people had concerns about the new materials and construction. I understand why: for many, the draw of companies like Red Wing is the old fashioned, extra  materials.

But I also get why out-of-the-box comfort makes business sense and will help Red Wing to crack into a new market: people who prefer comfortable shoes. (Crazy, right?) My experience with these materials has been overall very positive, the foam compresses and forms to my feet much like a cork midsole, and the break in was indeed easier. Not convinced? Don’t worry, the original Iron Ranger and Moc Toes are still made the way they always have been. The Iron Ranger Traction Tred‘s creation doesn’t mean those older boots don’t exist anymore!

But I think this space-age, streetwear-friendly Iron Ranger, is pretty darn cool. This American made boot is retailing on redwingshoes.com for $349.99.