I actually quite like Taylor Stitch. I’m not sure if that’s a controversial opinion or not but while I haven’t written about them before, I can’t think of any other digital brand that does such a good job of making and marketing apparel that is both heritage and modern. Not a lot of brands pull that off so well; I’ve worn their popular Ojai Jacket and their (discontinued) Sierra Parka for some time, and their stuff is handsome and well made.

I know some people turned on the brand after they moved a lot of their production to China. I’m not of the opinion that made in China means bad quality, but that’s a discussion for another time, as their boots aren’t made in China. They’re made in Léon, Mexico, and if you know anything about boots, you know it’s the boot making capital of North America and a ton of excellent boots get made there — Wolverine, Thursday, and more.

Taylor Stitch sells several boots nowadays, including a couple of a lace ups, but I was drawn to their Chelsea boots, which they claim are Alden-level quality at a fraction of the price.

This is very plainly a casual boot — and there’s nothing wrong with that. Taylor Stitch likes durable, old fashioned Americana and this boot fits the bill.

One unusual thing they’ve done here that really emphasizes the outdoorsiness is that they’ve given it a storm welt, which makes the boot both resoleable and extra water resistant. Adding to the toughness is the fact that absolutely everything is triple stitched, but the stitching is subtle — unlike the bright white triple stitches you’ll get on a pair of Red Wings, these boots get the durability of the triple stitch while keeping the overall look more muted.

The welt is attaching a grippy Vibram mini lug, the boot’s lined with sheepskin, and the last here is similar to a service boot. It obviously isn’t a service boot — because it has no laces, it’s a Chelsea – but it has a low profile toe and a sleek fit overall. A lot of Chelseas, like Blundstones, suffer from being round and bulky, but this boot does a great job of being clearly ready for anything you throw at it while nicely contouring the foot and not being remotely chunky.

It’s a sexy boot. Let’s take a look at this leather 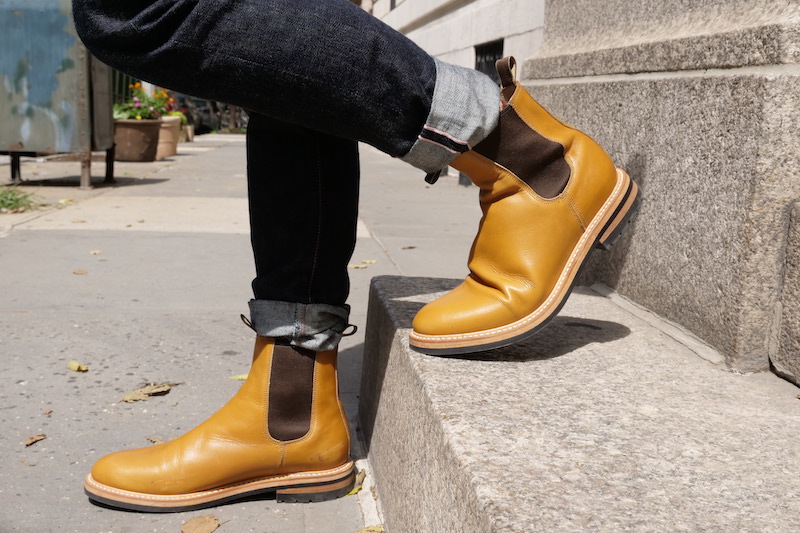 This particular leather — and it comes in six others, remember — is this gorgeous mustard color that I’d think would be more common in boots, but I don’t see it as often as I’d think. While it’s still rugged and masculine, it really makes outfits pop, especially if you’re a boring dresser who mostly wears dark colors (like me). Again, there are six other leathers in case you don’t like this one — Whiskey Eagle is the more classic brown if you want to go in that direction.

But this leather is called Saddle Tan. It’s about 1.7 millimeters thick, it’s full grain, and it’s chrome tanned at the very famous, award winning Le Farc tannery. The fact that it’s full grain, meaning it’s made with the outermost layer of the animal’s hide, means you can expect them to age beautifully. 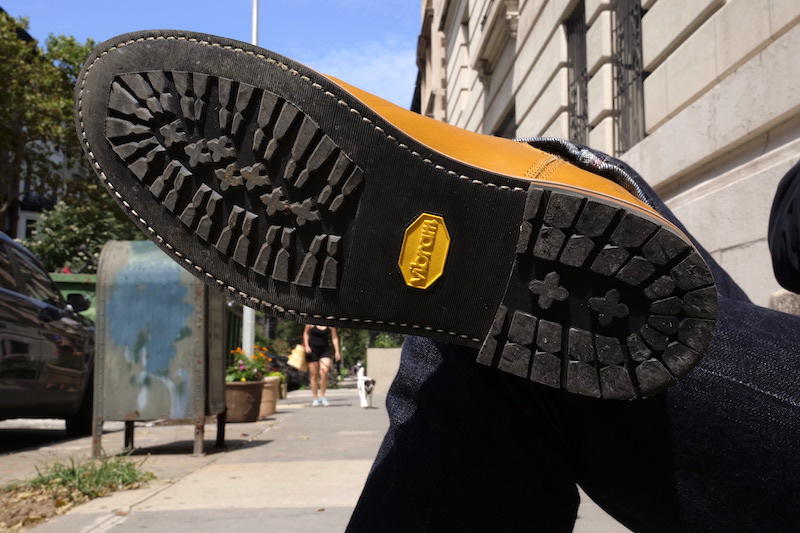 The outsole here is a Vibram mini lug, which is both flat and grippy. (You’ll find the same sole on Red Wing’s Iron Ranger.)

Unusually, there are two midsoles: one cork, one leather. Topped off with a leather insole, you’ve got a great combination of layers to mold to the shape of your foot over time.

Add all that to a shank and a super water resistant storm welt, and you’ve got an impressive boot that should meet the exacting standards of the heritage boot people. 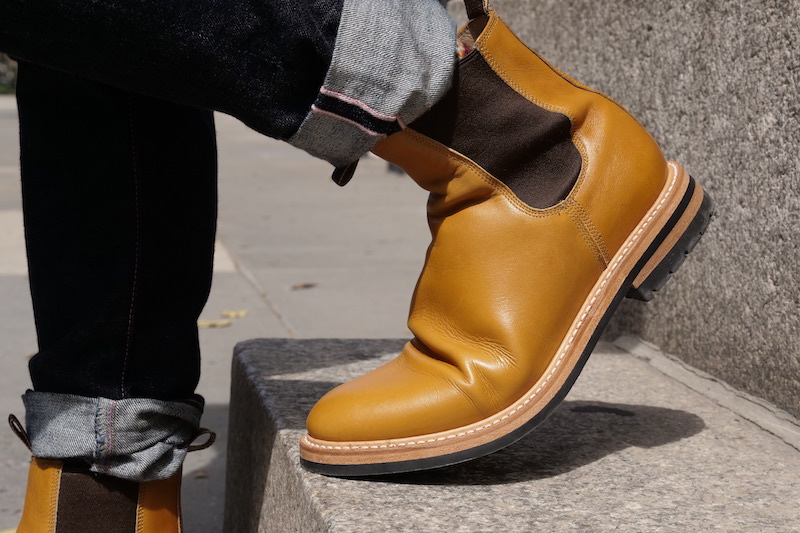 Sizes run from 7 to 13 and they do have half sizes, which is pretty uncommon for a company so new to making boots. While most boots, like Red Wing and Wolverine and Thursday and Viberg, run a little large, these are true to size: I got an 11.5 and it fit me very well.

They’re really quite comfy and surprisingly lightweight. The midsoles and insoles are nice and soft, the grip is solid, there’s decent arch support from the shank.

The only downside is that the boot is on the slimmer side and is quite snug on the forefoot. I didn’t mind this, and the leather does stretch with time, but the boot does hug your foot. The result is a versatile, slim look, but it doesn’t feel great on the pinky toes for the first few wears and anyone with an even slightly wide foot will be bummed out.

There’s not as much room in the toe as you’ll often find with most old fashioned boots, like an Iron Ranger, but the upside is they look a lot less like clown shoes!

[Compare with the Chelseas from Thursday Boot Company] 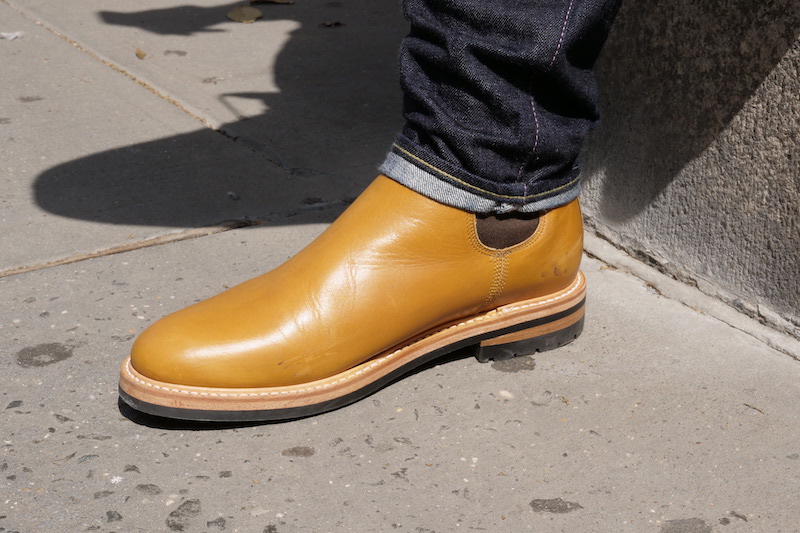 If the shoe were $351, I’d be annoyed. But $300-$350 for a storm welted, fully lined boot made in Léon with full grain leather and two midsoles… I’m fine with the price. It’s standard.

Given Taylor Stitch is a direct to consumer company, I would expect something more in the area of $275 to $325. But hey, it’s under $350 and it’s a very good boot, so I don’t hate the price. 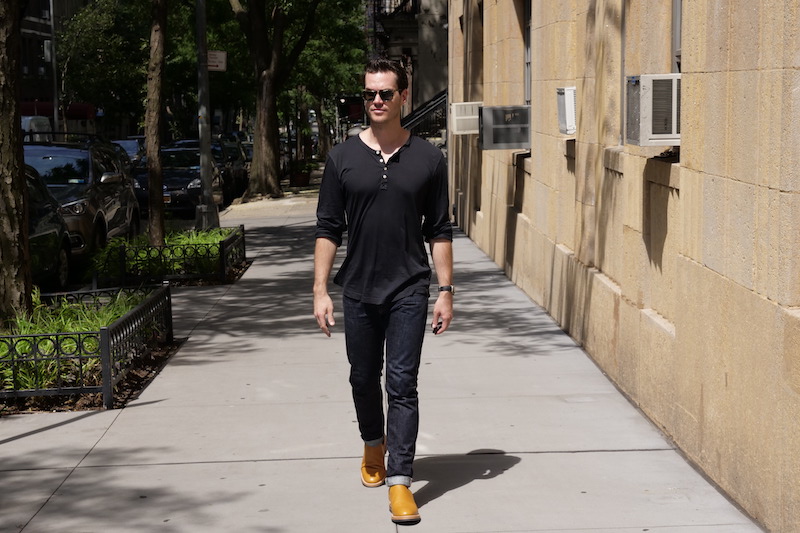 Let’s wrap this up. 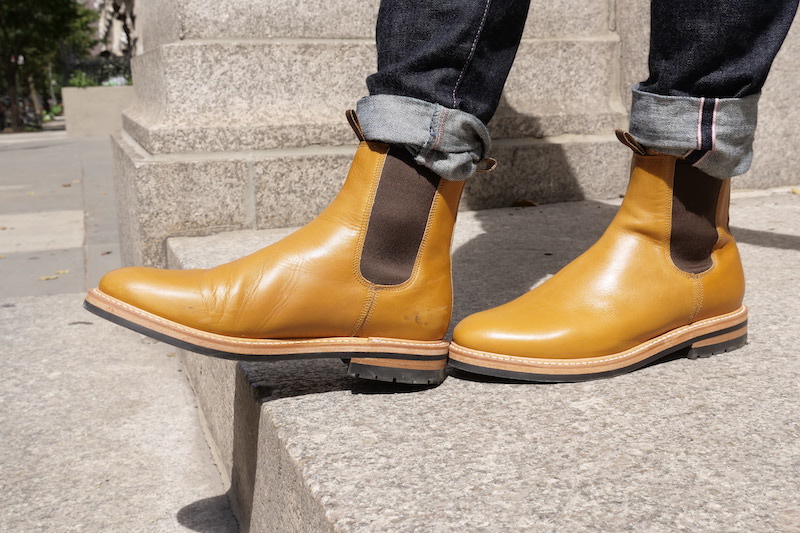 I really like the last, it’s low profile but not sock-like, it’s sleek-ish but it’s not skinny, it’s city friendly but tough as nails — it’s a balance that’s hard to pull off.

The construction is also really solid. It’s triple stitched, it has good grip, it’s got a Goodyear welt, so it’s very easy to resole an infinite number of times (at least until the leather wears out), the storm welt makes it ready for any weather.

The main downsides that might bug some people are the snug fit, that they’re not made in America, and they’re not all that cheap. But they’re also not expensive — if you know the market as well as I do, you’ll agree that the Ranch boot is worth the cost.