The Rhodes line of boots is a product of Huckberry, an online men’s store that the founders envisioned as “equal parts store, magazine, and inspiration.” It’s very mensy and very heritage, with a lot of old fashioned outdoorsy stuff like waxed jackets, leather jackets, selvedge jeans, and, of course, boots.

While most of their inventory is from other brands, Huckberry has gotten into the product game themselves and the crown jewel of their Rhodes line of boots is the Dean boot.

They say they wanted to make a boot that was versatile and inexpensive — which it is — but tough as well. The wordsmiths that they are, they have a lot of well crafted copy to describe these boots, noting that they are for:

The ones who don’t need to see their name in lights. The ones that finish the job on time and under-budget on principle.

And the Dean boot is “the best damn everyday boot there is.”

[Shop the Rhodes boot in like 9 different leathers here!]

This boot is fitting right into the trend of the dress boot/work boot hybrid, but it’s rounder in the toe than a few brands that do that, like Thursday Boot Company. What it’s going for is versatility. The last and stitching is dressier than the rugged leather and rawhide laces, so it’s filling an interesting niche in the market.

We’ve got some unusually outdoorsy calfskin leather here, which by design ages fast and gets a patina quickly. I’ve worn these around New York for a few weeks now, and they already look at least a year old, but that’s precisely what a lot of guys want from their boots.

It’s also made with a Blake Rapid stitch, not a Goodyear welt (which it looks like) and a Thermoplastic rubber sole, not Dainite (which it looks like). Those are important differences I’m going to get into later on in this review, but first, let’s take a closer look at the leather. 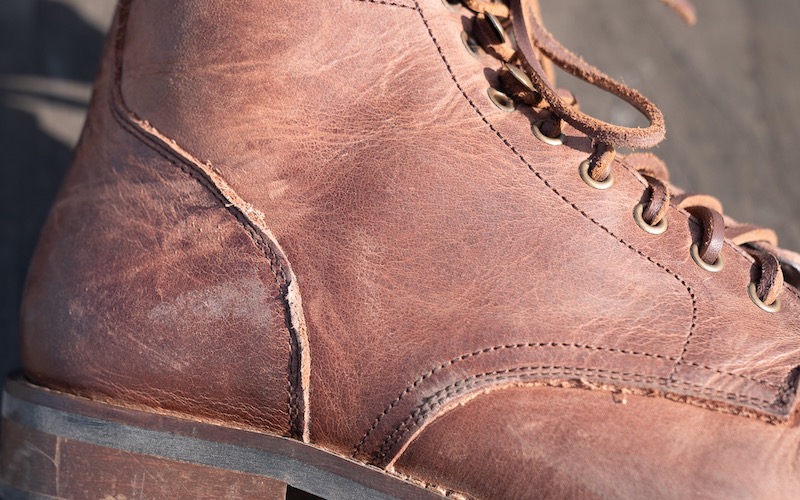 This is available in a pretty remarkable nine leathers right now, which of course include your basic black and natural, but they’ve also got nubuck, suede, and their most popular leather — the one I got — Rust. It’s a brown that becomes redder in sunlight, a color you might call russet. It’s not as red as the famous Briar Oil Slick leather from Red Wing, these boots are brown, it’s just a rich brown.

As you can see, the leather creased pretty significantly. I actually wrote to the Rhodes guys just to double check that this is normal, and they said it was — this creasing, the agedness, is something you might want to expect from the leather. That said, I was not a fan of how rough the leather was cut, as you can see in the picture above. It looks like it was done with a chainsaw.

This is calf leather, which has a bit more tensile strength than steerhide, and it’s anywhere from 1.4 to 2 millimeters thick. (Though I measured mine at a little over two millimeters, which is a nice thickness for rugged boots.) 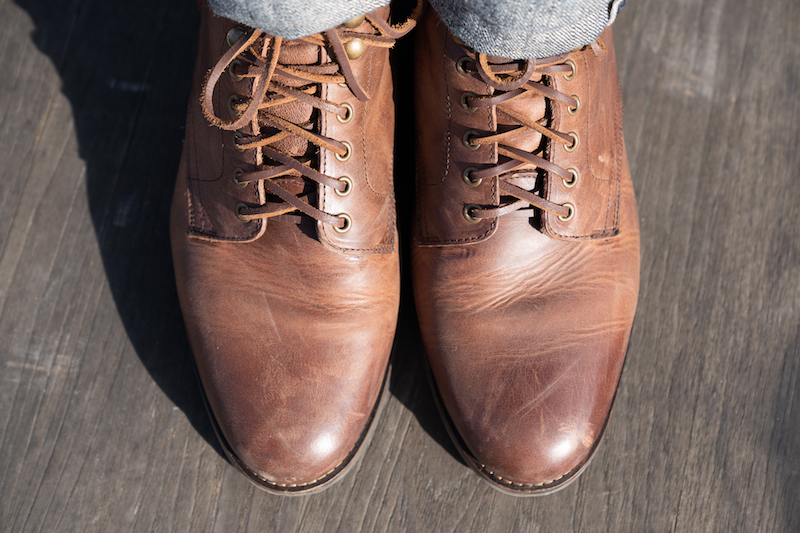 The leather comes from Portuguese tanneries, specifically from the Marsipel and Curtumes Ibéria tanneries in and around Alcanena, the traditional home of leather in Portugal. These two tanneries source their hides from North and South America for Marsipel and Serbia, Croatia, Bosnia, and the Baltic Region for Curtumes Ibéria. So I have no clue what continent the cows come from, but I know where they’re tanned!

A brief explainer: vegetable tanned is the type that’s eco friendly, time consuming, old fashioned, and makes very durable if kind of stiff leather; chrome tanning is made much faster, it’s stretchier and holds color well, and it’s terrible for the environment. (Read more in my comparison of vegetable vs chrome tanning.) So these shoes have both, like Horween’s famous Chromexcel, although it’s not as supple or lustrous as Chromexcel; these boots are hardy and they feel it. 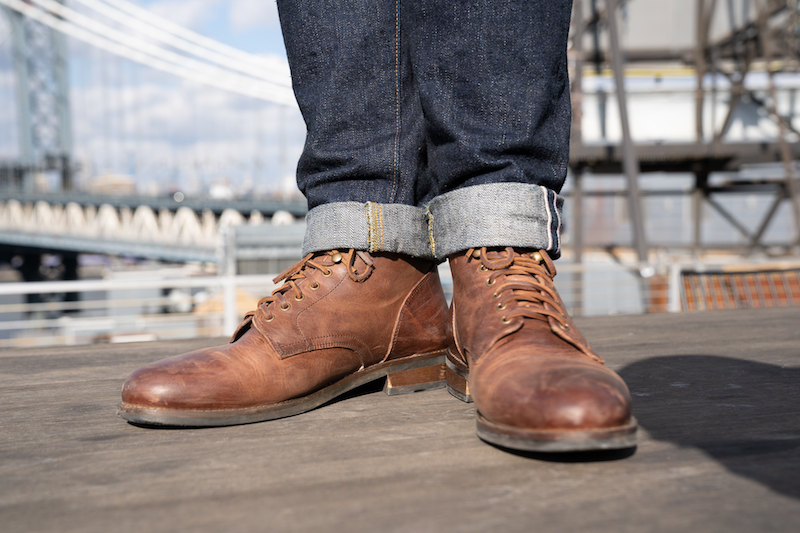 For taking care of the leather, they just say to use mink oil or beeswax oil. They prefer Red Wing’s mink oil. In my experience that darkens the leather a fair bit, so if you’re really attached to whatever color you get, I’d recommend something like Red Wing’s Leather Cream, neatsfoot oil, or Bickmore’s Bick 4, which is a bit cheaper. 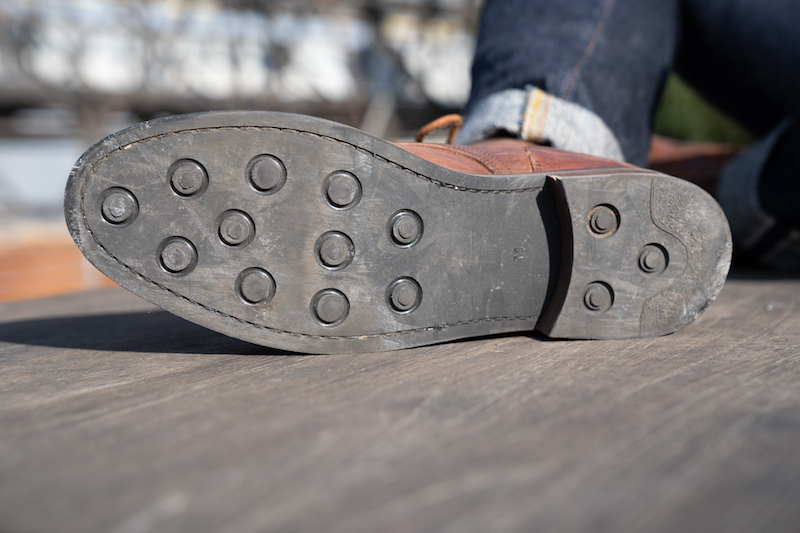 The outsole it is your basic Dainite copycat. Dainite is like the preferred flat studded rubber sole for nice boots, but you never see it on shoes at this price point. Relative to Dainite, it’s harder; the upside of that is that it sounds quite nice when you’re walking around in it — there’s a real nice click clack, hoof-clopping sound when you’re walking on wood — the bad news is the shock absorption isn’t great.

The sole is made from what they call Thermoplastic Rubber Soles Shore A 70, which are inexpensive but also recyclable, which might be a little upside for you.

As for the rest of the sole, there’s no cork in this midsole, there’s just cork in the heel. That’s what they call a talonete de salpa, which protects the heel nails. The main thing that’s going on in the midsole is a layer of Texon with 2 millimeters of EVA foam. The EVA foam helps to insulate the shoe, but the main purpose is shock absorption, but (bizarrely), it’s not great at that.

There’s also a shank in the shoe for stability and arch support, it’s fully leather lined, and everything is held together with a Blake Rapid stitch. That basically combines the properties of a Blake stitch and a Goodyear welt: it’s much less flexible than a regular Blake stitch, which is often found on dress shoes, but it’s more water resistant and easy to resole. 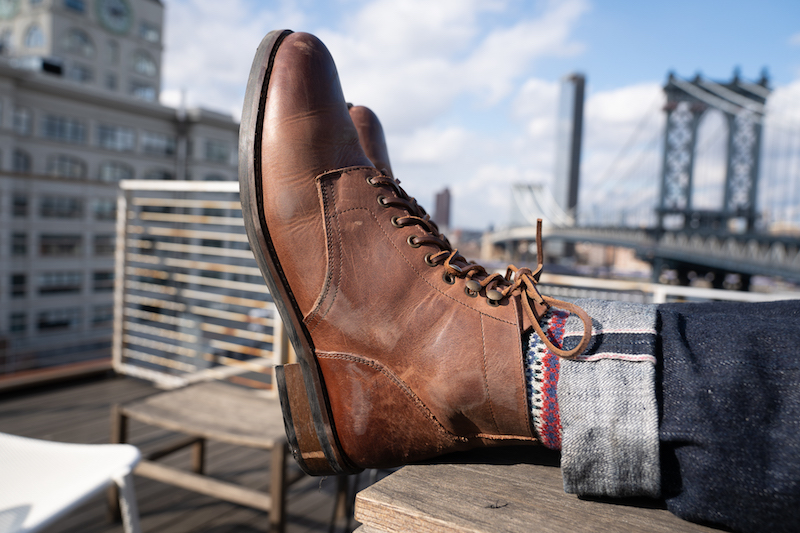 I already complained about the shock absorption — I can feel the impact of the heel rattling up to my knee — but otherwise I was happy with the comfort. The leather was certainly stiff, which I was surprised by given that calfskin is usually quite soft, but this is relatively thick, semi-veg tanned calfskin, so it’s pretty hardy leather. It started out stiff, but I didn’t get any blisters on the break in, in part because it’s leather lined.

Although it’s a relatively sleek design, I didn’t feel my toes pinch and the arch support was pretty damn good, especially as time went on and I started to sink into the sole a bit. 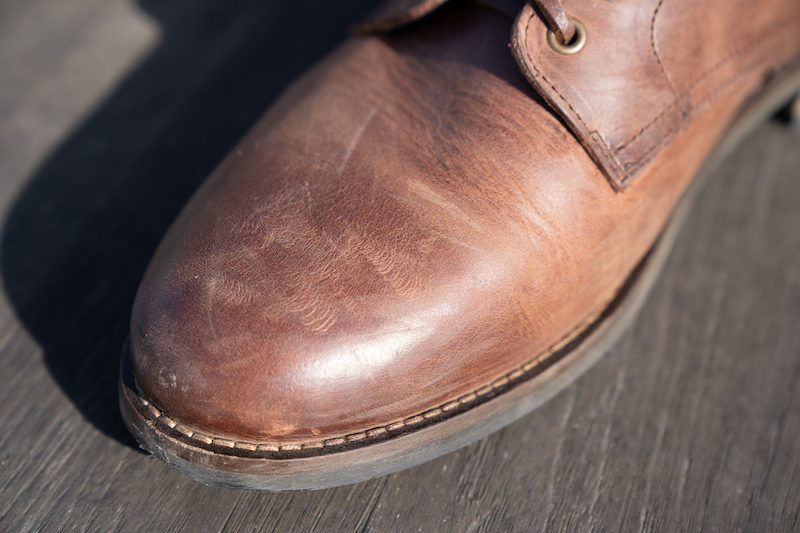 The big selling point with these boots is their price: $220.

It’s rare to find a hardy, resoleable, leather lined boot for under $300. It’s not the cheapest boot with these qualities, but the price is nonetheless very impressive.

[Shop the Rhodes boot in like 9 different leathers here!] 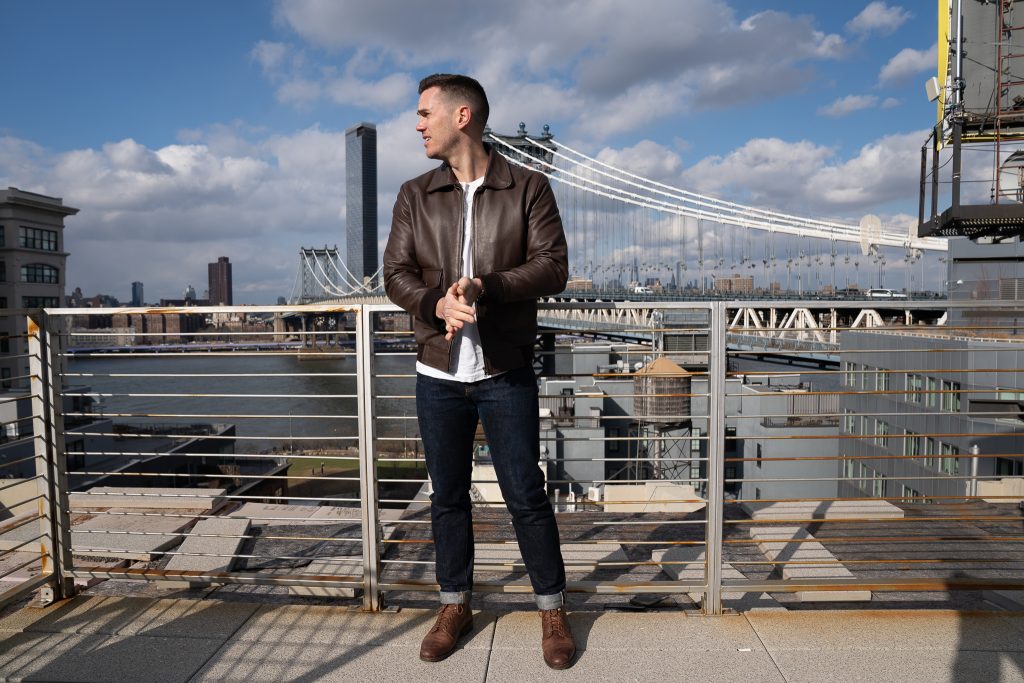 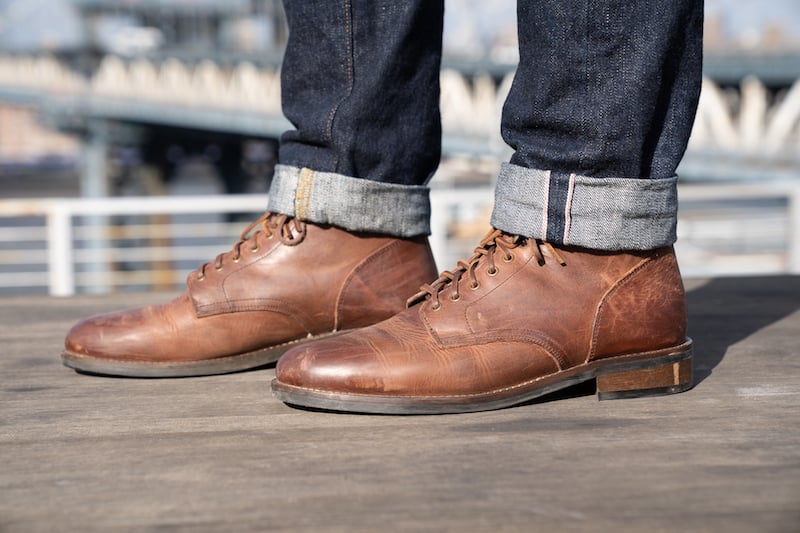 The leather is both a pro and a con: it’s very rugged looking and it looks pretty old pretty darn quickly. Again, that’s a feature, not a bug. They’re meant to look well loved, and for many guys it’s the look they’re chasing when they buy boots. And you get it early with Rhodes! Just don’t expect these to be useful in dressy occasions. That said, it’s a nice, versatile aesthetic that’s sleek but not too sleek.

I didn’t love how irregularly the leather was cut — it’s even fraying a tad at the stitches, as you saw earlier in this review. The shock absorption isn’t good, either. It’s not any worse than a Red Wing boot, just don’t expect the Texon and EVA to produce a shoe that absorbs shock as well as a sneaker, or a Thursday boot. They just feel like old fashioned boots.

At this price point, though, it’s hard to be too picky. I’d argue that Thursday boots are better and they’re twenty bucks cheaper, but if you’re attracted to the rounder toe and the fast patina, Rhodes makes a solid boot that’s worth the price.