I love Chelsea boots. This might be because I’m Australian, a land that’s unusually predisposed to this laceless boot, but since I moved to Manhattan ten years ago my love of the Chelsea has only grown deeper.

I mean, who wants to mess with laces if you don’t have to?

In this review, we’re looking at perhaps the most popular Goodyear welted Chelsea on the market and one that I see constantly whenever I leave my apartment: Thursday Boot Company’s Duke. This is one of three Chelseas that Thursday sells: The Cavalier is the dressy one, the Legend is the foul weather one, and the Duke is their all rounder: robust, water resistant construction with a streamlined silhouette that dresses up and down with aplomb. This minimalist boot is made with a timeless, versatile, and deceptively roomy style that can complement any outfit.

Check Best Price Compare With the Cavalier
We earn a commission if you make a purchase, at no additional cost to you.

Is Thursday’s Duke Boot Worth It?

Got somewhere to be? Here’s our summary of the pros and cons of this boot, but if you’re specifically wondering if it’s worth the price: it’s $199, the answer is yes. There’s no better value in the boot game if you’re after resoleable, water resistant Goodyear welt construction. This boot, made by anyone else, would cost at least a hundred bucks more.

First Up: What Is a Chelsea Boot?

The Chelsea boots originated as walking boots designed for Queen Victoria, before gaining popularity as slip-on boots back in the early 1800s for equestrians. In the early 20th century they became popular in England, which is where the name Chelsea comes from, and the Beatles brought them to the forefront of pop culture as their footwear of choice.

You can recognize a Chelsea because of the elastic side panels (called goring), which keeps the boot from moving around instead of using laces like most boots. All Chelseas are ankle length; you won’t find tall ones, except perhaps for some designed for female fashionistas.

They are very versatile. The simple, practical design makes them great for farming and walking while the clean, laceless profile allows for a classier, dressier looks. Above all, they’re convenient: after you notice how quickly you can pull them on and off at your doorway, you’ll wonder how you ever did without them. 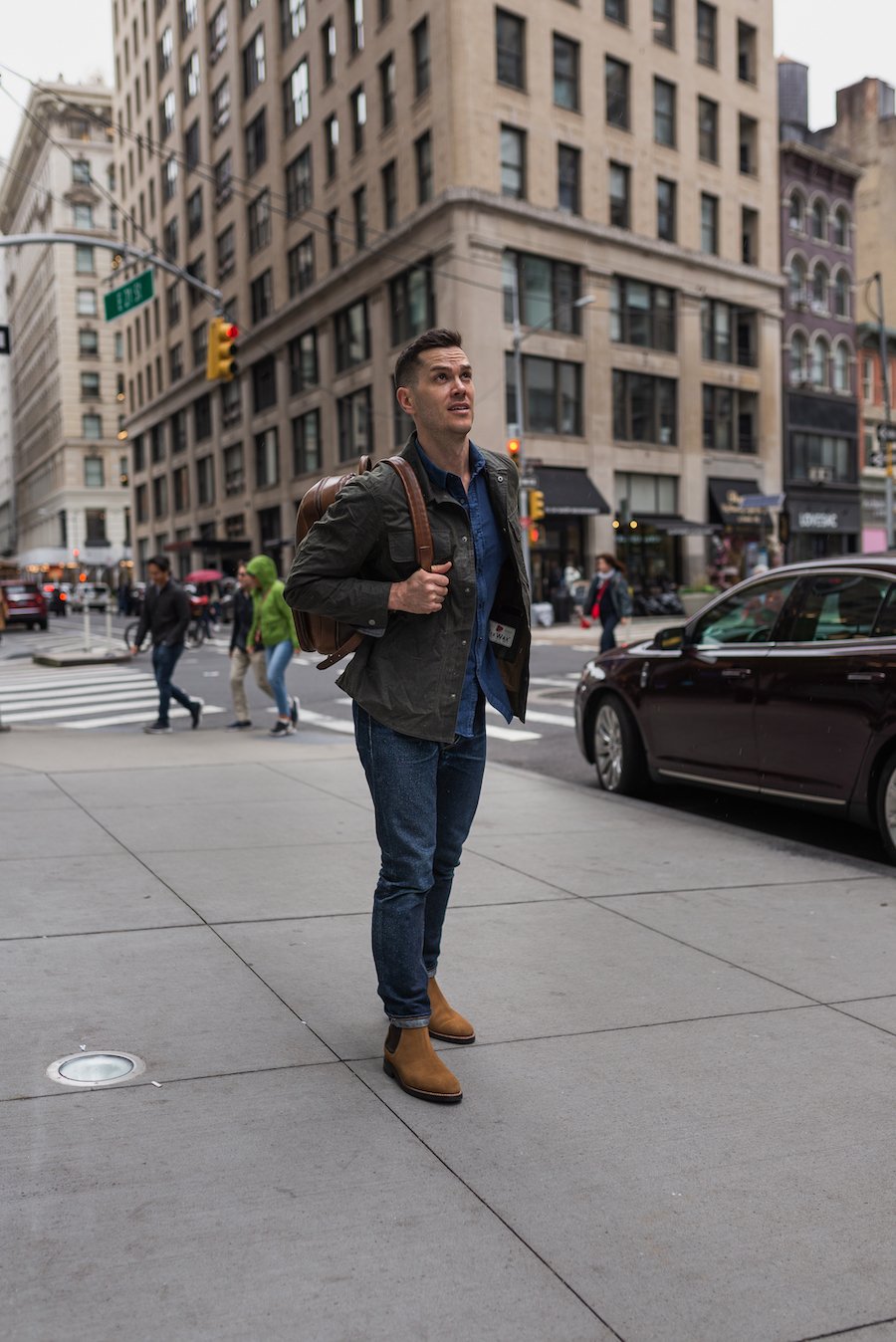 While the Duke has a classic American build, it’s fairly elegant. This company likes to incorporate a more refined look than really dedicated work boot brands like Red Wing and Nicks, so much like their über popular Captain and President boots, the Duke is sleeker than boots that are exclusively made for manual labor but more rugged than dress Chelseas. All of this is to say that they’re great as casual wear but, depending on the leather, the Duke can happily work in business casual environs as well. Just avoid baggy jeans for this slightly tapered boot.

Note that the Duke also has a pull tab, making it easier to get on and off. That lends some function to wearing it in muddy or dirty conditions, as it’s much nicer to touch a pull tab than a grubby heel, although pull tabs are also prone to riding the cuff of your jeans up and sticking out from under them. I always have to check my ankles every time I get up from sitting, but that’s an inconvenience most are happy with. 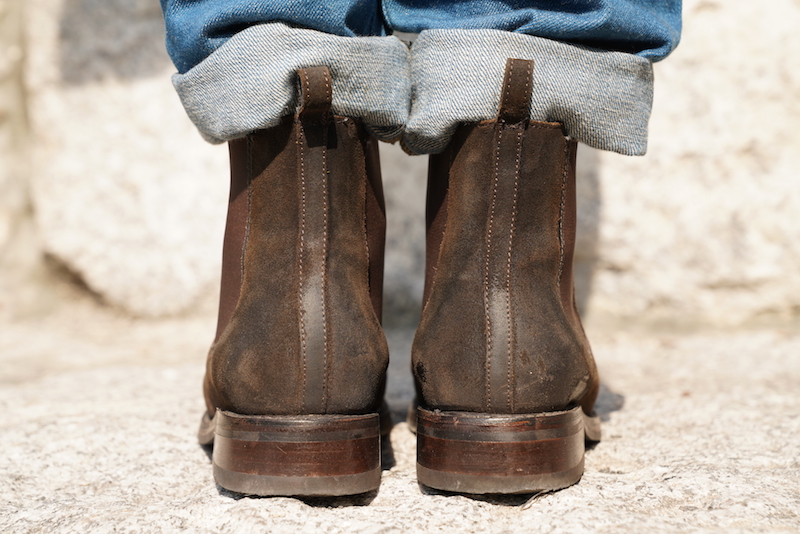 A big advantage of Thursday’s popularity is the sheer range of leathers they’re able to put out. While the Captain comes in over a dozen, the Duke usually has a half dozen or so: classic, smooth, black and brown leathers and a few suedes.

The pictures I’m showing you in this article are of my Chocolate and Honey Dukes, and both colorways are made from the company’s famous “WeatherSafe” suede. While in Mexico doing some work for a different tannery, I had the chance to visit the facility where this suede is produced, and it’s a really innovative process. In short, the suede is imbued with a range of hydrophobic oils and waxes in the tanning process that make the finished product repel water.

Suede is nowhere near as delicate as it’s stereotyped to be, but it does stain pretty darn easily. Not so with Thursday’s stuff: if you see a puddle, you can happily stomp away.

We’ve seen good leather boots for under $200 before, but seldom with this kind of construction.

Invented in the 19th century and still considered the best way to sole a shoe, Goodyear welts are complex and high skill, especially relative to the more common (and much cheaper) “cemented” construction you see on most footwear. That’s just gluing the top to the bottom, but here the upper and sole are tightly stitched to a vegetable tanned leather “welt” between them. This makes the boot easy to resole and while not technically waterproof, it’s more than water resistant enough to get you through foul weather.

The insole is a shock absorbing Poron foam, which helps the Duke evade an all-too-common criticism of traditionally made boots: they feel like walking around on hardwood. Especially for a generation raised in sneakers, the old timey construction of competitors like Red Wing can feel a bit jarring on the joints, so the Poron (while heresy to traditionalists) is an important addition that helped Thursday secure a foothold among the younger crowd.

That said, the rest of the construction is as traditional as boots get: a leather midsole, cork filling, and a steel shank. The shank helps with stability while the cork and leather mold to the shape of your foot over time, making for what feels like a custom fit — a key reason why so many guys love welted boots. 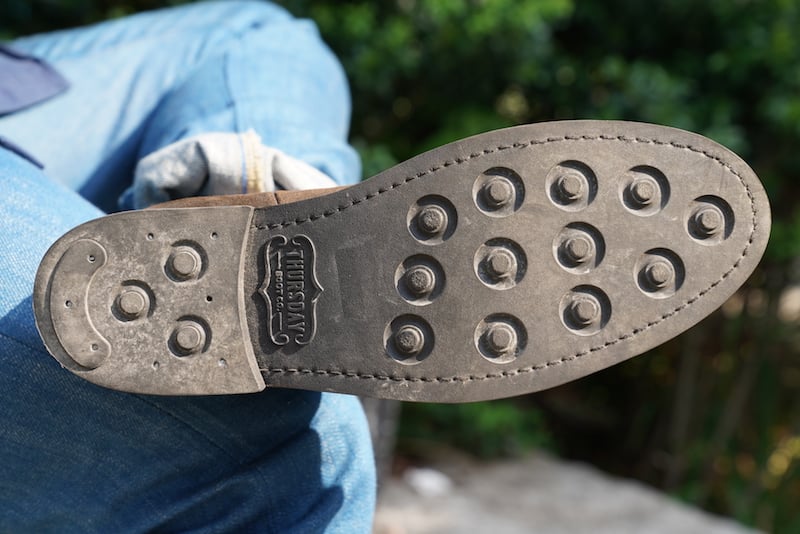 The low-profile, studded outsole that adds to the dressier look of the shoe. You get a great grip, but it’s not as aggressive as a mini-lug or Commando sole, which seriously dress down your footwear. This sole is a great compromise between leather soles and chunky Commandos, reinforcing its position as the best all rounder in Thursday’s Chelsea pantheon.

[Related: The 11 Best Chelsea Boots On the Market] 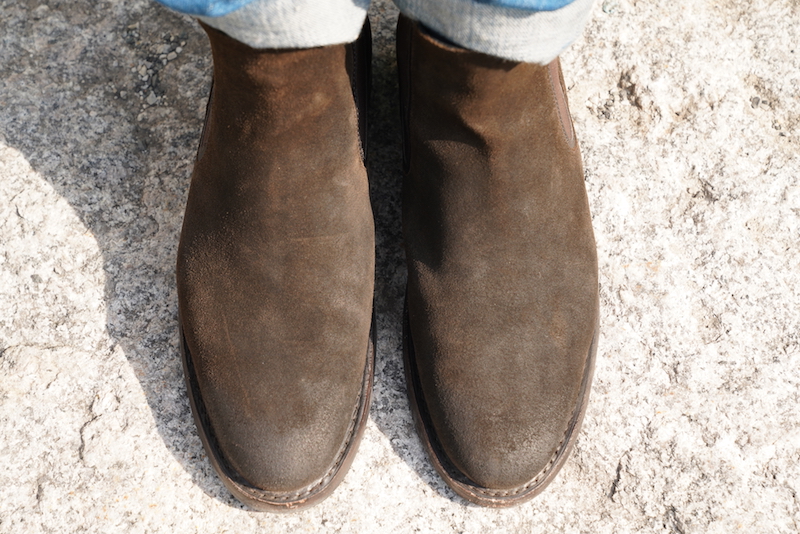 OK, so how do you size them? You go down half a size from your true size. If you don’t know your true size, it’s likely half a size smaller than what you wear in sneakers. Go to a shoe store and get measured on a Brannock device if you’re unsure.

(It’s worth noting that at the end of 2022 Thursday updated a ton of their fits, so it might be best to reach out to Thursday for confirmation on their sizing.)

If you have wide feet, you’re in luck: select colors are usually available in a wide version that fits EE feet. This is rare for any brand and particularly rare for a Chelsea boot.

Compared with super old timey boots like Red Wing’s Iron Ranger, these boots require no blistery break-in on account of the softer insole and more casual, less stiff leather. They are comfy the minute you put them on. The Poron and cork provide great shock absorption, the shank provides arch support and stability, and the leather lining is pliable.

For a boot with full grain leather, Goodyear welt construction, and leather-and-cork soles, this boot should cost a good $300, but Thursday’s direct-to-consumer model lets them sell it for $199. The price is ludicrous, but the most surprising thing is they’ve managed to keep them at this price since they launched around 2014. This company’s inflation-proof. It doesn’t make sense, but I’m not complaining.

This minimalist boot is made with a timeless, versatile, and deceptively roomy style that can complement any outfit.

Check Best Price Compare With the Cavalier
We earn a commission if you make a purchase, at no additional cost to you. 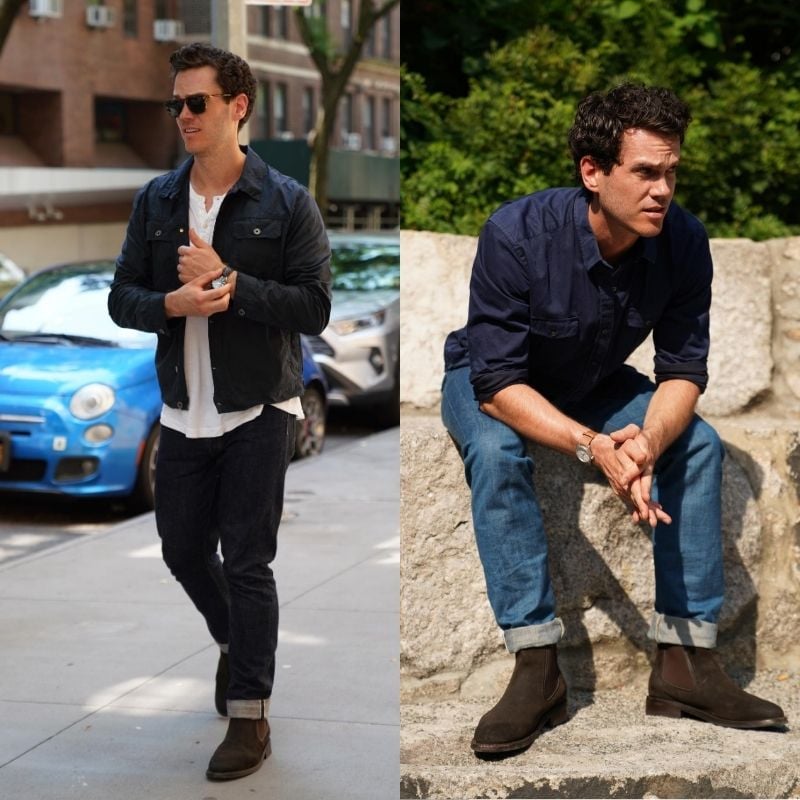 It simply amazes me how much Thursday packs into a pair of boots for $199.

I review a lot of boots, and barely any are so versatile that you could wear them every day. If you’re looking for downsides, there’s the fact that they’re hard to wear with baggy jeans, the flat sole also makes them a little hard to dress all the way down, most of the models don’t come in wide widths, and some traditionalists don’t like the way the Poron insole compresses over time.

But those are issues I’m more than willing to accept for the sheer value and versatility of this completely unique boot.

Yes. Practically every boot under $200 glues the leather upper to the sole, but Thursday uses Goodyear welts, which are resoleable and very water resistant. The value for money is bonkers.

Are Thursday's Duke true to size?

It is recommended that you size down half a size from your true size. Get measured on a Brannock device and talk to Thursday to make sure, but returns and exchanges are free in any case.

Is the Duke Chelsea Boot a casual boot?

Yes, the Chelsea boot is casual by design but depending on the type of leather you get yours in, they will work fine with more dressy styles. It's less casual than more work-focused Chelseas like Blundstones, blending in better in the city.