For many, finding a pair of boots that work with their style is an easy task. A majority of guys just want a black or brown boot that can carry them though a rainy day. But for those of us who are tired of the classics, finding that perfect boot can be a bit of a quest. For example, brands have a million and one names for all the different shades of brown but will rarely stock their signature models in vibrant colors. I believe more brands should offer their signature styles in colors other than black or brown, so I went looking for the best white boots for men.

I think they are extremely versatile and go well with my “heritage but make it street” style. They are great alternatives to white sneakers when cold weather approaches.

Below are some of the options that you may like. In the first four options, you will find boots that are all white or white with a slightly different colored sole, then we’ll take a look at three off white boots. 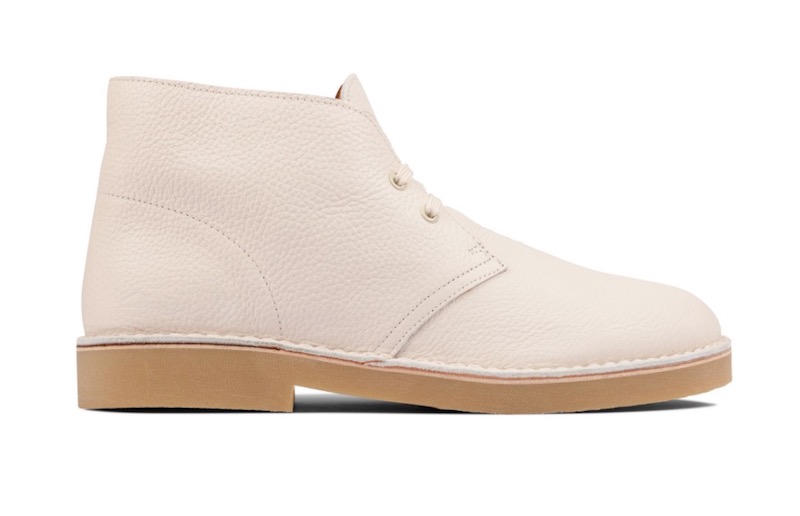 First up is a fresh take on the classic Clarks Desert Boot — see my review of the original here.

One of the most inoffensive looking shoes ever, you really can’t go wrong with Clarks Deserts Boots, especially if you are trying to venture out into more colorful footwear.

This iconic chukka — that’s a shorter boot with two or three pairs of eyelets — has been around for over 70 years. Originally designed as a military boot, today this style serves as a wardrobe staple for new and seasoned fashion enthusiasts alike. This iteration is made from grained white leather stitched onto Clarks’ famously comfortable crepe sole.

Who Should Buy The Clarks Desert Boot 2? 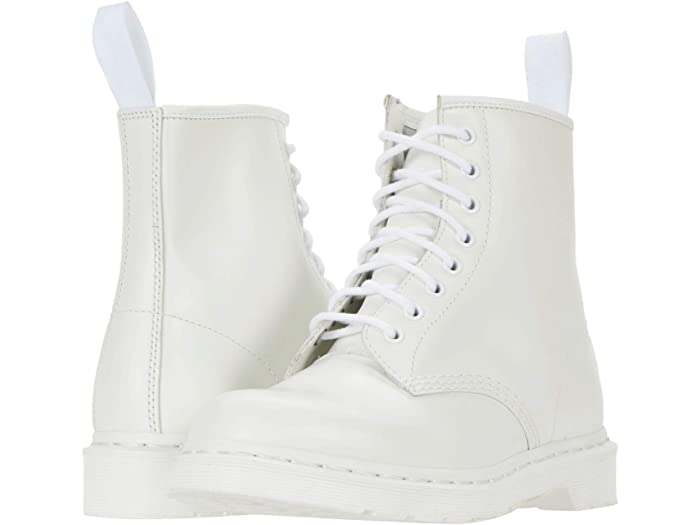 New to boots and don’t know where to start? Then Docs may just be for you!

With the 1460 Mono, Dr. Martens’ really demonstrated how they can give a funky shoe a sophisticated makeover. This pair of Docs is completely white, even down to the stitching and sole. It is the perfect transitional boot for people who enjoy white sneakers but want to try something new — while the 1460 certainly has a boot-like appearance,the signature bouncing soles will feel just like your favorite pair of kicks.

Who Should Buy The Dr. Martens Boot?

Shop the Dr. Martens boot in all white here, or check it out with the original sole and stitching here. 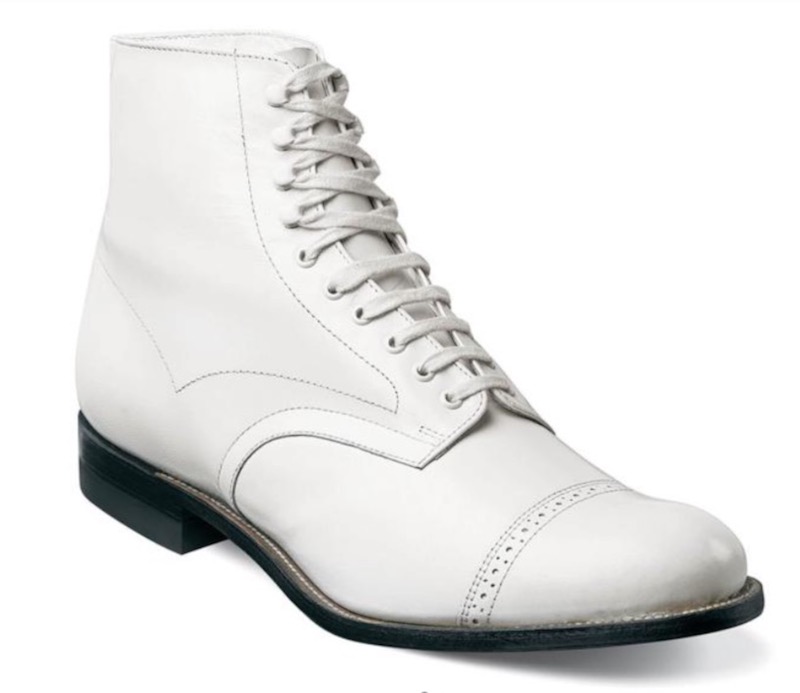 One of the more refined boots on this list, this is a rugged classic with a fresh paint job.

Once one of America’s shoe giants, Stacy Adams has fallen off the boot nerd’s radar in recent years, but perhaps the latest rendition of their Madison boot could save their name. This all white cap toe boot is made from a very supple kidskin leather that molds quickly to your foot. Keeping up with tradition, it also has a full leather sole and unlike the first two boots on this list, the Madison is Goodyear welted, so it can be resoled.

Who Should Buy The Stacy Adams Madison?

If nothing on the market interests you, why not go full custom? Benzein Shoes offers just that.

Benzein is a shoe company in Indonesia that specializes in MTO services. They offer a wide range of styles, leathers, soles, as well as other customization features for you to choose from. Their boots are made with a stitchdown construction and are favored by many in the Instagram boot community.

These boots actually belong to me and they were made at my request; I asked them to source white leather for me for a pair of boots, and they did so with the highest quality white leather I’ve seen. They can do it for you, too! I do have to warn you though, that ordering a pair of custom boots from Indonesia will take several months before they get to your doorstep, and their website is often broken. To order the shoes, you need to e-mail them ([email protected]) or DM them on Instagram.

Who Should Buy Benzein’s Catcher Boot 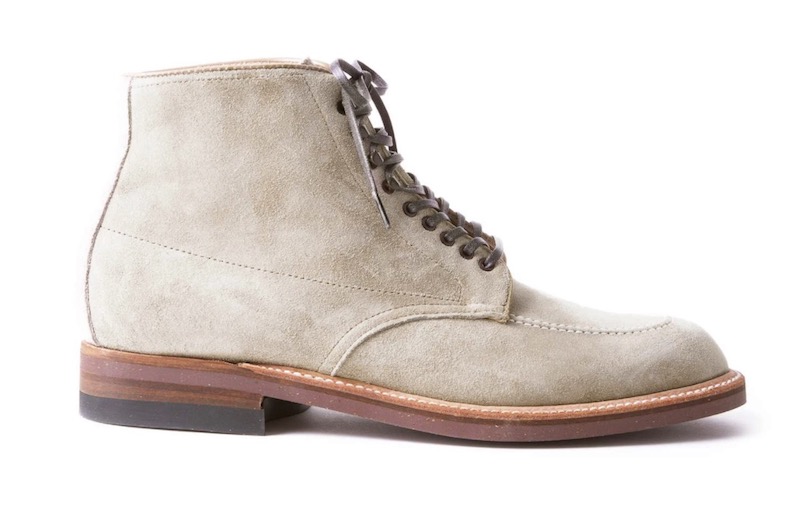 Todd Snyder collabs are always fun to look forward to. The uppers of these Indy boots are made from a suede that seems to shift from a pure white to a creamy off white color depending on the light.

The Indy Boot was made famous by Indiana Jones but Todd Snyder made this classic more stylish than ever. This refined take on an American icon is exactly what the heritage fashion world needed. It showed people that having a contemporary style doesn’t mean you need to sacrifice build quality. Fair warning though: if you want this model, you better act fast as this is a very limited release!

Who Should Buy The Alden Indy  Boot 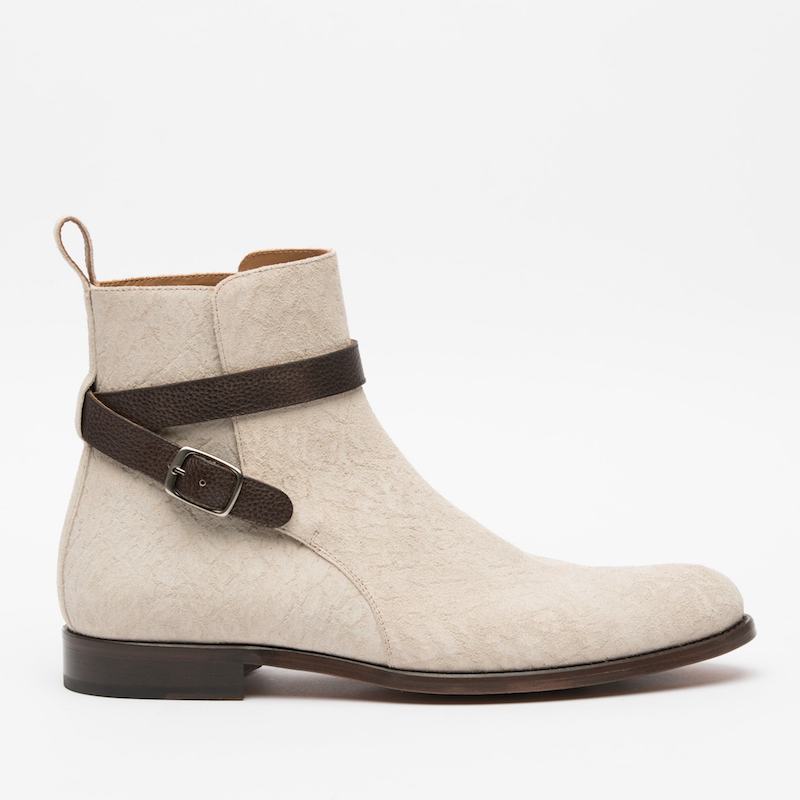 Whenever you see something from Taft, you know you’re getting something different. This brand is known for its decorative take on old school styles. If you want an over the top white-ish boot, then this may be for you.

Taft’s Dylan Boots is made from Rough Mohawk suede sourced from the legendary CF Stead Tannery in England. The boot itself is very modern, meaning it is extremely minimalistic and has a slimming profile. If you consider yourself to be fashion-forward, then I cannot recommend these enough.

Who Should Buy The Taft Dylan Boot 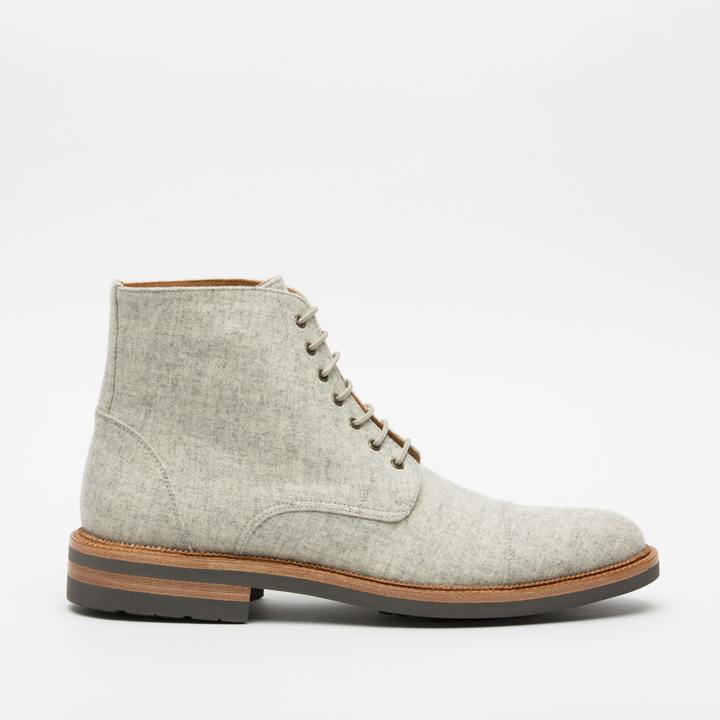 We’ve established Taft makes out-of-the-ordinary boots, so it made sense to revisit another of their boots for this list — but it’s wholly unlike the Dylan.

The last boot on the list stands out from the rest because it isn’t made from full grain leather, or suede, or roughout: it’s wool. Taft changed the game with their signature woolen Jack Boot and the Jaro boot nixed the leather counter and heel to produce an all white boot that looks cool as hell, making a statement while being relatively minimalist.

Who Should Buy the Taft Jaro Boot 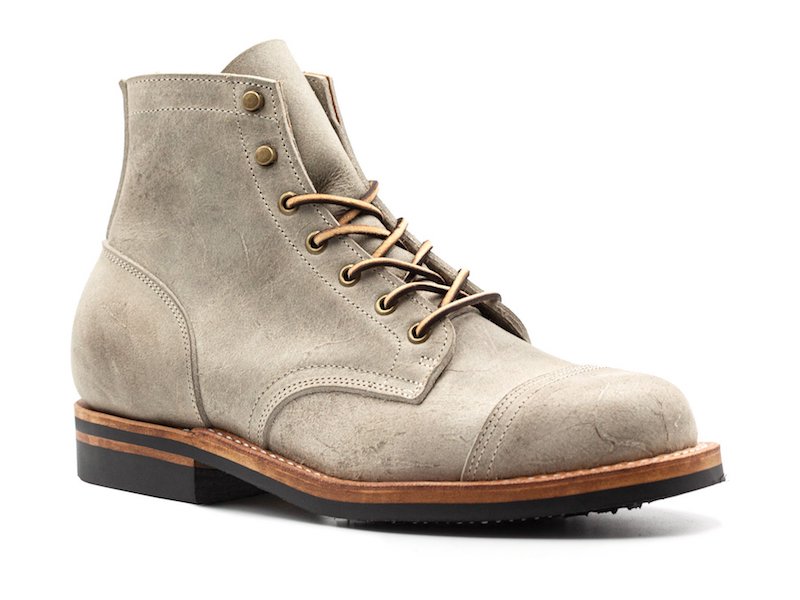 It’s up to you whether this extremely light grey boot can count as “white,” but we’re confident the average passerby would call you “the guy in those awesome white boots.”

The last boot on the list stands out from the rest because it isn’t made from full grain leather, or suede, or roughout: it’s wool. Taft changed the game with their signature woolen Jack Boot and the Jaro boot nixed the leather counter and heel to produce an all white boot that looks cool as hell, making a statement while being relatively minimalist.

Who Should Buy the Taft Jaro Boot

It should be easier finding boots that you like. I think the frustration for myself and many others stems from the fact that there is not enough variety in the heritage fashion scene. Everything is black or brown.  If more brands started making boots in other colors, such as white, then they could potentially attract a new group of customers. Here, I think I’ve done a good job of showing just how wearable white boots can be.